Objective: Activating and amplifying γδΤ cells with Mycobacterium tuberculosis low molecular peptide antigen (Mtb-Ag), in order to investigate the expression of CD69 molecules on γδΤ cellular surface. Methods: Activate health human peripheral blood mononuclear cells (PBMC) separately obtained, PBMCs were stimulated with Mtb-Ag and further isolate positive cells by immuno-magnetic beads selection, measure the proportion of γδΤ cells in the PBMCs by fluorescent monoclonal TCR γδΤ-PE staining and flow cytometry. Then, measure the expression of CD69 molecules in first stimulation and re-stimulation of γδΤ cells by γδ-PE/CD69FITC double staining. Results: The proportion of γδΤ cells were 4.9% in freshly isolated from PBMC, 69.2% after 10 days of Mtb-Ag activation, and 99.3% after immuno-magnetic beads selection. After 24 hours, the expression of CD69 molecules in γδΤ cells with initial Mtb-Ag stimulation arrived at peak at 75.2%. 6 hours later, in the second stimulation, it peaked at 72.0%. Conclusion: Mtb-Ag can specifically stimulate the proliferation of γδΤ cells in the PBMC. Both its initial and the second stimulation can specifically activate γδΤ cells.

γδΤ cells are a subgroup of T cells identified in 1986, mainly distributed in mucosa and subcutaneous tissues, such as 10-18% in human intraepithelial lymphocytes (IEL),and 25%-37% in human large intestinal IEL, 50% in mice IEL, accounting for only 0.5% to 5.0% of the total number of lymphocytes in adult peripheral blood [1]. Mucosa and epithelial tissues are the first line of defense against pathogen invasion and are also the frequent occurrence of tumors. The high proportion of γδΤ cells in mucosa and epithelial tissues suggests that γδΤ cells are crucial in resistant to microorganisms and parasites, anti-tumor and immune regulation. Since the recognition of antigen by γδΤ cells is not restricted by major histocompatibility complex (MHC), and antigen-presenting cells are not required to treat and present antigens, so γδΤ cells are more efficient and more extensive than α, β, Τ cells. For this reason, γδΤ cells have received increasing attention [2-5]. In the past, the use of flow cytometry or magnetic cell separation techniques to separate γδΤ cells requires not only a large amount of peripheral blood, but also expensive equipment and complicating operations. The authors used Mtb-Ag to specifically stimulate the proliferation of γδΤ cells. The obtained cells were positively sorted by magnetic beads selection to obtain a large number of high-purity γδΤ cells, and the expression of CD69 molecules in Mtb-Ag primary stimulation and re-stimulation of γδΤ cells was observed. Now introduced as follows [6].

Cell preparation: Taking out the peripheral venous blood of 5 healthy adults and make heparin anticoagulated. PBMC was isolated by routine separation with lymphocyte separation solution, and the cell concentration was adjusted to 1.5 × 106/ml with RPMI1640 complete culture solution [5] for spare.

Detection of CD69 expression in γδΤ cells stimulated by Mtb-Ag for the first time: Draw 24 well cell culture plates, add the above prepared PBMC suspension to 24 wells in culture plate, 1 ml/well, and add Mtb-Ag (5 μg/hole). Then, cells were harvested at 37°C, 5% CO2 incubator for 0 h, 6 h, 12 h, 24 h, 48 h and 72 h. Use the direct immunofluorescence staining measure the expression of the CD69 in γδΤ cells by CD3PE/CD69FITC, γδPE/CD69FITC cell double staining. On the flow cytometer (Coulter EPICS XL), the argon ion laser wavelength was 488 nm as the excitation light, and the FSC/SSC (three-color flow cytometry) two-dimensional dot pattern was set. The gates were tested in lymphocyte populations and the resulting data files were analyzed using MinMDI 2.8 software.

Mtb-Ag re-stimulation of Mtb-AT cells induced reexpression of CD69 molecules in γδΤ cells: PBMC was stimulated by Mtb-Ag stimulation and cultured for 10 days, then Mtb-Ag (5 μg/well) was added again. The cells were harvested at 37°C, 5% CO2 incubator for 0 h, 6 h, 12 h, 24 h, 48 h and 72 h. The detection method was the same as before.

The proliferation of lymphocytes was observed by active quantitative method. After stimulation with Mtb-Ag, PBMC was cultured with rIL-2. The cells proliferated slowly in the first few days. After about 4 days, the proliferation accelerated, reaching a peak at 12 days, and the number of cells increased by nearly 40 times.

Proportion of γδΤ cells in lymphocytes

Figure 1: The proportion of γδΤ cells. (A) PBMC; (B) Mtb-AT before sorting; (C) Mtb-AT after sorting.

Mtb-Ag firstly stimulated the expression of CD69 in γδΤ cells 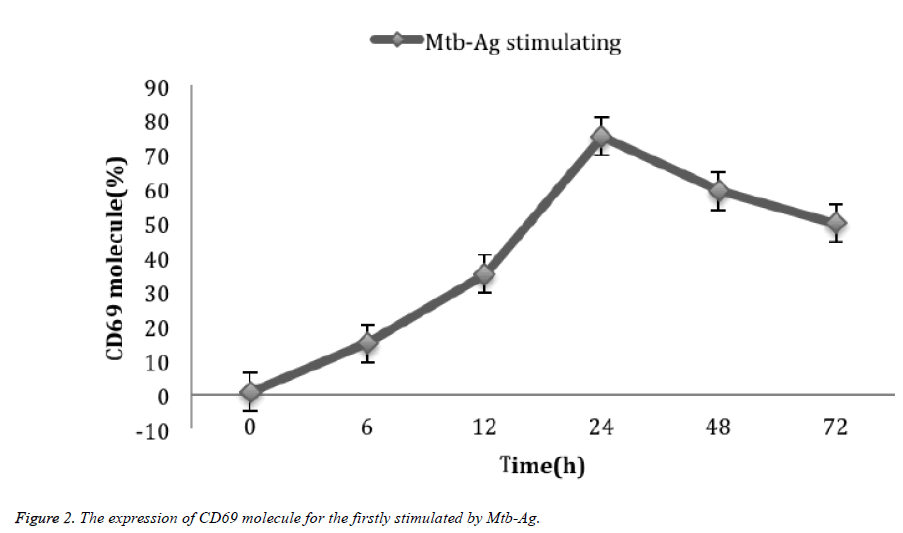 Figure 2: The expression of CD69 molecule for the firstly stimulated by Mtb-Ag. 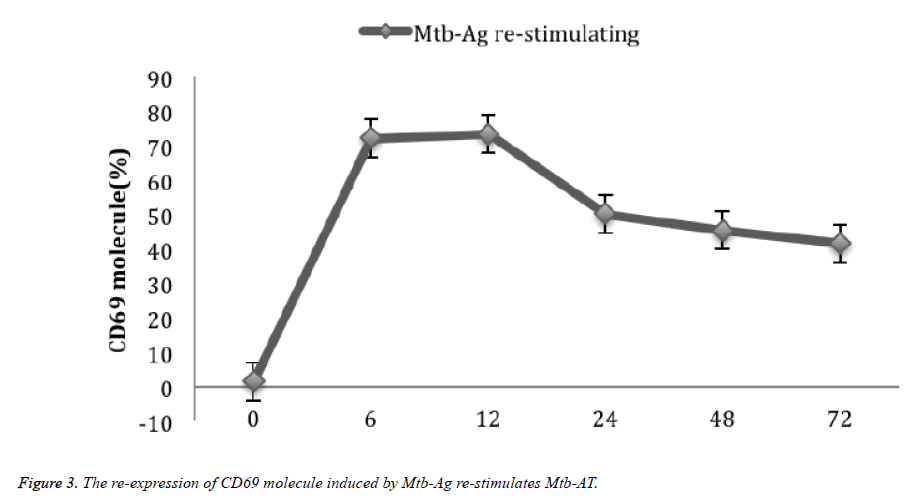 The results of this experiment showed that the ratio of γδΤ cells in freshly isolated peripheral PBMC was 4.9 ± 1.85%, and that Mtb-Ag stimulated PBMC up to 69.2 ± 6.57% after 10 days of culture; It is the same as the results of previous experiments in our laboratory and other researchers [7,8], indicating that Mtb-Ag has the characteristics of preferentially activating and amplifying γδΤ cells. Therefore, Mtb-Ag stimulates PBMC, interleukin-2 (IL-2) maintains cell proliferation and culture, and then positively sorted by immunomagnetic beads, a large number of γδΤ cells can be obtained, which can be used as a simple Rapid γδΤ cell amplification acquisition method. The method has the advantages of low blood volume, high specificity, short cycle, no special equipment, and the like, and can provide a source for the research on the biological characteristics of γδΤ cells and the immunotherapy of clinical diseases. Of course, domestic stimulants have also been used to amplify γδΤ cells, such as Han et al. [9] After stimulating PBMC with zoledronic acid for 10 days, γδΤ cells increased from 4.21% to 70.35% before amplification; After Gui [10] sheep culturing human PBMC with isopentenyl pyrophosphate and rhIL-2 for 10 days, γδΤ cells increased from 4.34% to 55.65% before amplification; Xi et al. found that isopentenyl pyrophosphate (IPP) and ammonia Disodium hydroxy diphosphate (PAM) has similar effects on stimulating γδΤ cells at 14 days of action [11]; heat extracted by anti-γδΤ cell receptor, IL-2, human hepatoma cell SMMC-7721, etc. Shock protein 70 (HSP70) and their different combinations induced the production of γδΤ cells in human peripheral blood. As a result, γδΤ cell receptor (0.4 μg/ml) induced a large amount of γδΤ cells, reaching 61.5%, at 0.8. When it was increased at μg/ml, it reached 75.7% [12]. When it was combined with IL-2, the yield did not change significantly. When used in combination with HSP70, the yield increased significantly, reaching 71.1% and 85.6%, respectively. HSP70 and IL-2 combined use can also produce a large number of γδΤ cells, up to 75.6%; Ding [13] and other use of Mycobacterium tuberculosis heat-resistant antigen (Mtb- HAg) and butenyl diphosphate stimulated human PBMC, while IL-2 (50 μ/ml) was administered to maintain cell proliferation, and a control group supplemented with IL-2 was also established. As a result, after 10 days of culture, the rhIL-2 group proliferated. The ratio of γδΤ cells was (13.61 ± 4.14%), the ratio of γδΤ cells in the Mtb-HAg-stimulated group was (50.71 ± 7.49%), and the ratio of γδΤ cells in the butenyl diphosphate-stimulated group was (67.39 ± 6.40%). These stimulation methods can also obtain a large number of γδΤ cells, but no immunomagnetic beads positive sorting method is used to obtain higher purity γδΤ cells.