Diabetes mellitus (DM) is a chronic hyperglycemia resulting from insulin secretion or whole or partial insufficiency of secreted insulin action and is an endocrine and metabolic disease characterized by various complications arising from disorders in carbohydrate, lipid and protein metabolism. Diabetes mellitus is characterized by classical symptoms such as polydipsia, polyuria, and polyphagia and weight loss. Complications such as angiopathy, cardiomyopathy, neuropathy, nephropathy, ketoacidosis, hyperglycemic hyperosmolar non-ketotic coma and atherosclerosis can develop in the later stages of the disease. Every year thousands of people in the world lose their lives due to these complications [1].

For diabetic treatment in recent times, due to side effects of therapeutic agents (oral hypoglycemic medications) there is a serious trend toward herbal medications. The majority of traditional medical plant extracts can be used for diabetes treatment. One of these plants is Ganoderma lucidum which has been used as medical drug for centuries in China, Korea and Japan. Known as the “immortality mushroom”, this mushroom species is called "Reishi" in Japanese and "Ling Zhi" in Chinese. The results of experimental studies have stated that in animals with induced diabetes mellitus, Ganoderma lucidum and components reduce blood glucose levels by a significant amount [2-5].

This effect of Ganoderma lucidum is considered to be occur by stimulating release of insulin by preventing destruction of β cells in the pancreas; preventing elevation of blood glucose levels by reducing or delaying absorption of glucose by the small intestine; and indirectly suppressing production of pyruvate carboxylase, the enzyme responsible for ATP concentration and gluconeogenesis in hepatocytes, and phosphoenolpyruvate carboxykinase (PEPCK) at molecular level causing reduction of glucose production [2,5]. When oxidative injury is assessed, the amino polysaccharide fraction (G009) iron in Ganoderma lucidum inhibits induced lipid peroxidation by making hydroxyl radicals and superoxide anions inactive and additionally is reported to have chemopreventive effect by reducing oxidative DNA damage [6]. A study of mice focused on the positive effect of Ganoderma lucidum polysaccharides on lipid profile [2].

Streptozotocin is an N-nitroso derivative of D-glucosamine used in experimental animal studies to generate human-like diabetes in rats. It is thought that oxidizing substances cause diabetes by selectively destroying the Langerhans cells [7]. Streptozotocin is a metabolite of a microorganism named Streptomyces achromogenes found in the soil and was first isolated in 1960. It was first identified with antibiotic, antitumoral and carcinogenic properties and was described as a diabetogenic agent in dogs, cats and rats in 1963. The active substance in streptozotocin contains a methylnitrozole side chain attached to the C-2 position of 2-deoxy-D-glucose [8].

This study was designed to determine the effect of Ganoderma lucidum on the oxidative stress occurring in STZ-induced diabetes in rat’s by evaluation of biochemical parameters.

The study was approved by the Local Ethics Committee of Kafkas University for Animal Experimentation (KAÜ- HADYEK, code: 2011-40). A total of 60 male Wistar Albino rats aged 4-5-months-old, weighing 275-345 g, were allocated into 6 equal groups with 10 in each group. Animals were fed ad-libitum and housed at 25 ± 2°C temperature, with 60%-65% humidity and 12 h light and 12 h dark conditions and kept in cages cleaned daily (5 animals per cage). Feed was given in special steel vessels and water was supplied as normal tap water in stainless steel walled bottles. Applications were initiated after 1 week of adaptation and all applications were carried out between 17:00 and 18:00 every day. The groups were as follows;

Animals were fed ad-libitum with normal diet and given saline by oral gavage during the study in order to establish the same standard as other groups.

Animals were orally fed 180 mg/kg Ganoderma lucidum only. This dose was chosen to obtain the most effective antioxidant activity.

Dried mushrooms were obtained from Agroma Mushroom Breeding (Denizli/Turkey) where Ganoderma lucidum is permitted to be dried since 29.12.2011 with the registration number TR-20-K-0000062 according to Food and Feed Law No. 5996 by the Ministry of Food, Agriculture and Livestock, Lt;/RTI and gt. Dried Ganoderma lucidum mushrooms (6 kg) were ground and milled in 120 L hot water for 14 h at 60°C in a shaking water bath, then the mixture was filtered through filter paper and the remaining t volume, determined as 60 L, was treated with 90 L of ethanol in order to obtain polysaccharides. This mixture was kept at +4°C for 4 h. It was then centrifuged at 3000 rpm for 5 min to allow the precipitation of high molecular weight components. Then, the supernatant was removed and ethanol was added at a ratio of 1/3 (v/v, solution/ethanol) and stored at +4°C for 4 h. The liquid was removed by centrifugation at 3000 rpm for 5 min. The remaining solid was washed with ethanol, acetone and diethyl ether, respectively, and chemicals used for washing were removed by evaporation. Ganoderma lucidum polysaccharides in the form of brownish powder were obtained [9]. In order to determine the presence of polysaccharide in the obtained extract, the Molisch assay and the hydrolysis test for polysaccharides were carried out as described [10]. These tests were positive.

At the end of the experimental stages, animals were placed under anesthesia with 0.4 ml/kg pentobarbital sodium and intra-cardiac blood samples were obtained. To obtain serum from a portion of the blood samples, they were placed in gel tubes; the remaining portion was placed in heparin tubes to remove plasma. Blood samples in gel tubes were immediately placed in a cooled centrifuge at +4°C with 3000 rpm for 10 min to obtain serum samples. Blood samples in heparin tubes were centrifuged at +4°C with 3000 rpm for 10 min to separate plasma. The prepared serum and plasma samples were stored in a freezer at -20°C until analysis.

After taking blood samples, liver and pancreas tissue were removed. All of the pancreas tissue and a portion of the liver tissue were fixated in 10% buffered formalin solution for histopathology investigation. The remaining tissue samples were washed in lactate ringer solution and wrapped in polyethylene bags and labelled before being stored in a freezer at -20°C until analysis.

Immediately before analyses, in accordance with the procedure for the kits used, an amount of liver tissue sample was weighed and 9 times this weight of phosphate buffer solution was added (1/10 ratio) and the sample was homogenized with a homogenator. Later the homogenized tissue samples had homogenates separated with the aid of a centrifuge and stored in polyethylene tubes.

Tissue samples of liver and pancreas were fixed and the paraffin blocks were prepared by routine tissue monitoring. For histopathologic examinations, sections taken from paraffin blocks were examined microscopically by staining with hematoxylin and eosin. Slides were evaluated for degenerative and necrotic changes.

Data were analyzed with the one-way analysis of variance (ANOVA) and Tukey test using the SPSS 18 package program. Correlation analysis was also performed to determine the level of association between HDL-LDL, TOS-TAS and TOS-fasting blood glucose levels. Values of p<0.05 were considered statistically significant.

In the diabetic control group; degenerative and necrotic changes were observed in general. Acute cell swelling and hydropic degeneration in hepatocytes and vacuolar degeneration of some hepatocytes were detected. The cytoplasm of degenerative cells was observed to be lightly colored and granular. Necrotic changes were observed in single or small areas, especially in hepatocytes in the acinar and midzonal regions. Dilatation of the synuclein in the liver and slight activation increase in the star cells of Kuppfer were also detected (Figure 1). 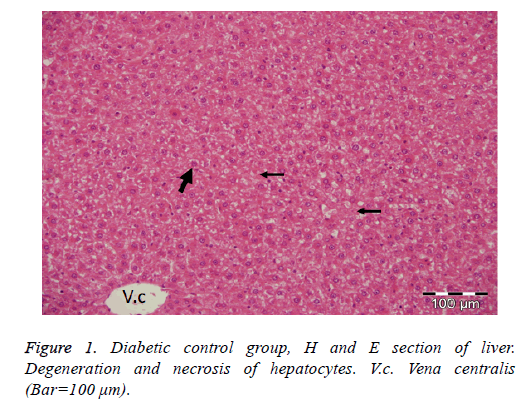 Administration of 60 mg of Ganoderma lucidum to the diabetic group did not alter the severity of degenerative and necrotic changes when compared to the diabetic control group. In the groups given 120 mg and 180 mg of Ganoderma lucidum, acute cell swelling, hydropic degeneration and necrotic changes were determined in the liver cells, but the severity of the lesions was less than in the diabetic control group (Figure 2). 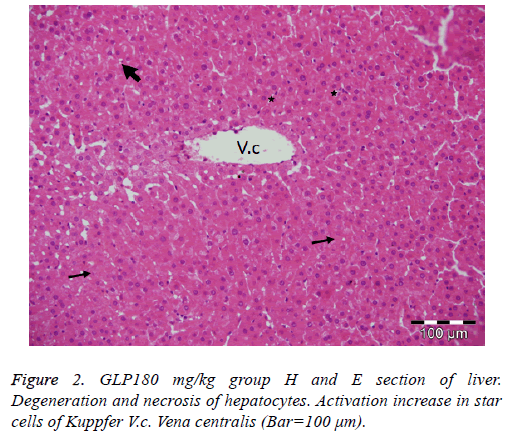 Diabetes mellitus is a chronic metabolic disease requiring continuous medical care in which the organism does not benefit from carbohydrates, fats and proteins due to insulin deficiency [11]. According to the World Health Organization (WHO), the number of people with diabetes is estimated to double by 2030 from 171 million in 2000 [12]. The persistent hyperglycemia observed also increases the formation of free radicals, primarily reactive oxygen species (ROS), by glucose auto-oxidation and protein glycosylation in all tissues. The increase in ROS can be due to the increase in reactive oxygen species, as well as the decrease in the antioxidants CAT, GSH and SOD [13]. Increased polyol pathway activity due to persistent hyperglycemia increases the occurrence of oxidative damage in tissues causing damage to tissue antioxidant defense systems [14].

A number of experimental studies have been carried out on diabetes using extracts from both fruit stem of Ganoderma lucidum as well as different components [2,15,16]. As a result of these studies, Ganoderma lucidum and its components decreased the number of oxidants and blood glucose level by increasing total anti-oxidant level. It was stated that the antioxidant properties of Ganoderma lucidum polysaccharides protect pancreatic beta cells by preventing oxidative damage. Thus, stimulation of insulin secretion from beta cells of the pancreas is also maintained. It has also been reported that Ganoderma lucidum polysaccharides slow the absorption of glucose from the small intestines, keeping the blood glucose level at a certain level and indirectly controlling insulin secretion [5].

In trials involving diabetics experimentally induced with STZ, hydropic and vacuolar degeneration, sinusoidal dilatation, necrosis, increased activation in astrocytes, and hypertrophy in cells were found in the livers of animals [16,26,27]. In parallel with our studies, acute cell swelling, hydropic degeneration, vacuolar degeneration in some hepatocytes, and necrotic changes in hepatocytes in the acinar and mid-zonal regions were found in the diabetic control group of our study. In addition, dissociation in liver cells and slight activation increase in star cells of Kuppfer were detected (Figure 1). However, some studies have not detected severe fat degeneration in liver cells [27]. It was concluded that the probable cause may have been differences in the animal species used and the experimental set-up.

The findings of the present study confirm the previous results and additional suggest that Ganoderma lucidum polysaccharides would be quite effective in ameliorating the histopathological changes caused by diabetes in liver tissues.

This study was funded by Kafkas University (Project number: 2012-VF-25).

All applicable international, national, and/or institutional guidelines for the care and use of animals were followed.

This article does not contain any studies with human participants.