Effect of cooking utensil on iron content of food.

Iron assumes a critical part in every living being. Iron deficiency in the body may leads to the most prevalent disease i.e. Anemia. However this deficiency of iron in the body can be prevented by using iron utensil instead of aluminum and stainless steel utensil. Through this study, the effect of utensil on iron content of food has been demonstrated by X-ray Fluorescence Spectroscopy (XFR) method. Foods cooked in non-iron utensil has been found less iron content in food as comparison to the food cooked in iron utensil. Increment in iron content was found to be 0.007 mg/5 g in Bengal gram and 0.0011 mg/5 g increased in Beetroot halwa when cooked in iron utensil.

Iron is a mineral that is normally present in numerous foods and their products. It is also available as a dietary supplement and many products are fortified with this nutrient [1]. Also the number of food contains substance of iron in very little amount. Iron plays its basic role in exchanging of gases mainly oxygen from lungs to all over the body cells. As a part of myoglobin, a protein that gives oxygen to muscles, iron underpins digestion [2]. Iron is likewise essential for development, advancement, ordinary cell working, and blend of a few hormones and connective tissue [2,3]. Heme iron, which is formed when iron joins with protoporphyrin IX, contributes around 10% to 15% of aggregate iron intakes in western populaces [3-5].

Most iron, upon digestion, enters either a pool of non-heme iron or a pool of heme iron. Human retain heme iron, found as 40% of aggregate iron in meat, fish and poultry, as an unblemished iron porphyrin complex at a moderately high rate [6]. Women, teenagers, newborn and kids are in danger of creating iron deficiency weakness. Women lose iron through menstrual blood loss or pregnancy [7]. If iron intake is constrained or deficient because of poor dietary admission, paleness may happen accordingly. This is called iron deficiency anemia. Monsen and Balintfy condensed strategies to enhance retention of non-heme iron through dietary alterations. The utilization of iron cooking utensils is a conceivable intends to expand the measure of dietary iron.

An insufficiency of iron in the body can leave a man feeling worn out and drowsy, and can prompt a turmoil called anemia [10]. Anemia is extremely an indication of an infection procedure instead of a sickness itself. Anemia depicts the condition in which the quantity of Red Blood Cells in the blood is low, or the platelets have not as much as the ordinary measure of hemoglobin [4].

World Health Organization (WHOs) gauges that two billion individuals are sickly worldwide and trait around half of all anemia to iron deficiency [11]. It happens at all phases of the existence cycle yet is more pervasive in pregnant ladies and youthful children [12]. Anemia is the aftereffect of a wide assortment of causes that can be isolated in any case, more regularly exist together.

Iron absorption can be promoted by favoring acidic environment in the already present iron. Availability of iron can be increase if it is present in soluble form i.e. ferrous. Ferric iron is less soluble when the stomach acidity is low while ferrous iron shows more absorption and easier to absorb in the small intestine. Ferric iron needs to be converted in ferrous form of iron (Fe2+). It was found that person with anemic condition has absorption power of iron directly from intestine to blood stream. In case the person with more iron than he need forms store of iron known by ferritin. Adults utilize 3%-10% iron while iron is mostly absorbed in growth stages and anemic person.

Generally the people having pure vegetarian food habits needs more iron than non-vegetarian consumers as discussed earlier. So, according to this criteria Food and Nutrition (FNB) Board has developed the Recommended Dietary Allowances. Table 1 lists the current iron RDAs for non-vegetarians. The RDAs are 1.8 times higher for vegans than for individuals who eat meat. This is on account of heme iron from meat is more bioavailable than non heme from plant-based nourishment and meat, poultry and fish increment the retention of non heme iron [5]. For infants from birth to 6 months, the FNB established an AI for iron which is equivalent to the mean intake of iron in healthy, breastfed infants. [*Adequate Intake (AI)]

Cast iron non-stick cookware helps in diminishing the emission of poisonous synthetic compounds like Perafurocarbons (PFC) while different metals produces harmful vapor when overheated. It has the ability to holds heat proficiently and has high limits that it tends to be utilized with less fuel. Foods with more moisture, greater acidity and longer cooking time expanded more in iron content amid cooking in iron cookware, the examination closed [13]. Iron cast ware majorly helps during simmering which takes more hours to cook.

According to some studies aluminum level in food is of great considerance. Food cooked in aluminum utensils has a higher Al (Aluminium) content which can be detrimental for healthy individuals and particularly to patients with chronic renal failure. In healthy persons, diseases of central nervous systems, as well as of hematopoietic system, skeletal system and respiratory system are described due to excess of aluminum consumption. Aluminum utensils have quick supplanted iron cooking pots from Indian kitchens, subsequently an investigation to know the adequacy of iron cooking pot as a measure to combat IDA is necessary [14].

A study was implemented by Quinteas et al. [13] shows that mineral migration can be beneficial for as long as it occurs in amounts adequate to the needs of the consumer or no toxicological implications are involved. In this study, the migration of Fe, Mg, Cr, Ni and Ca, along seven cooking cycles were evaluated for two food preparations (polished rice and commercial tomato sauce, the latter as an acid food), performed in unused stainless steel, cast iron and soapstone pans, taking refractory glass as a blank. Regression analysis of the data revealed that, as a function of the number of cycles, the iron pans released increasing amounts of iron when tomato sauce was cooked.

The soapstone pans released calcium (35 mg/kg and 26 mg/ kg), magnesium (25 mg/kg and 15 mg/kg) into the tomato sauce and rice preparations, respectively. Additionally, the commercial tomato sauce drew manganese (3.9 mg/kg and 0.6 mg/kg) and some undesirable nickel (1.0 mg/kg) from the soapstone material, whereas the stainless steel pans released nickel at a lower rate than steatite and in a diminishing fashion with the number 0 cooking cycles, while still transferring some iron and chromium to the food. We conclude that while cast iron and glass could be best for the consumer’s nutritional health, stainless steel and steatite steel can be used with relatively low risk, provided acid foods are not routinely prepared in those materials [15].

• determine iron content of food cooked in an iron utensil,

• determine iron content of food cooked in a general utensil,

Cautions arrangement of the substance and watchful utensil cleaning methods may limits iron sullying from water or utensils. All utensils were together washed after every replication in a sink of new high temperature water and cleanser, flushed two times with running cool faucet water in the adjoining sink, washed in two skillet of deionized water utilized as a part of cooking and cleaning contained irrelevant measures of iron.

First the samples were mixed homogenously. 5 g samples were taken from the center in each of the food samples and placed in silica crucibles. For analysis, the samples were flamed with 2 mL of ethanol to burn inorganic substances present in the food sample. Then the samples were dried, ashed and analyzed for iron content using (Association of Official Agricultural Chemists) AOAC (1980) methods. Dry ashing was done. The four samples were then ashed in the muffle furnace at 425°C until white/grey ash was obtained (6 h). The ashing temperature of 425°C was utilized instead of 525°C expressed in AOAC strategy. Because in dry ashing some iron loss may happen on the grounds that iron volatizes as ferric chloride at 450°C.

Then, each crucible was kept in desiccators using tongs from the muffle furnace, so that ash does not absorb moisture. Weigh each sample until the samples were cooled down and kept inside the desiccators again. Then the ashed samples were analyzed for further iron determination. Iron content as Fe is determined by XFR method.

From the given Table 2 and graph (Figure 1) it was shown that the raw foods iron content was 0.3 mg/5 g in Black gram (whole) and 0.038 mg/5 g in Beetroot halwa. It was shown that iron content of food increased after cooking in the iron utensil by 0.007 mg in Black gram while 0.0011 mg in comparison of general utensil. From the above values it can be estimated that 1 serving of Black gram dal (30 g) when cooked in iron utensil can supply 4.5% of RDA for the age group of 19-50 Yrs. (Male) as mentioned by WHO (World Health Organization), while the sample cooked in general utensil can supply 4% of RDA. Be that as it may, iron source of plant origin are less bioavailable to human sustenance contrast with iron from animal food source.

Table 2: Cooking utensils and their effects on iron content (mg/5 g) of foods. 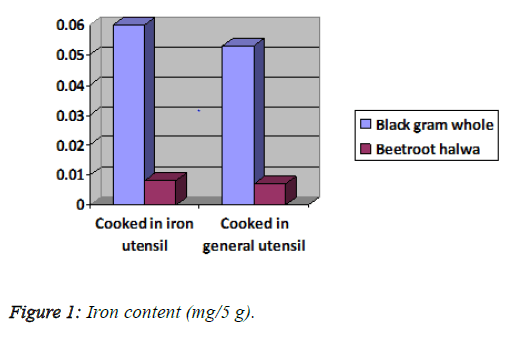 The bulk of food consumed by a child is too less to provide him with therapeutic amounts of iron from diet alone. In the developing countries, the child is quite unlikely to get poultry products and eat as a source of heme iron. If in this situation, the child is provide with food cooked in iron utensil, then it provides additional iron to meet the increased demand. This will not only be cost effective but it will also alter the cooking practices and thereby have a long term effect on the iron status of the entire family.

Foods chosen for the study was based on their high iron content. Pure vegetarian’s people were found more prone to anemia especially in the age group of adolescent in girls and during pregnancy and lactation in case of women. It was shown from the above study that effect of cooking utensil on the cooking time as well. Food cooked in iron utensil took more time as compare to non-iron utensil. The sample D took more time to become ash as comparison to other samples which has taken 6 h. Ashed food sample has found negligible weight when weigh on the measuring scale. All the iron values which are shown above 5 g of food sample only. Small part of iron was found to be increase in case of iron utensil which can help in prevention of anemia. Black gram dal was prepared without kidney beans, onion and garlic as this dal is usually prepared with these ingredients in the houses, which may help in increment of iron content in food.

Through this study we may include that using utensil does not affect organoleptic properties of food such as taste, flavor and appearance. Also the iron utensils are cheaper than aluminum and stainless steel utensils. Usefulness of iron utensils needs to be appreciated. Awareness need to be increased in women of both rural & urban areas. Indian women need to be encouraged using iron utensils that will promote adequate iron intake. People need to aware about the effect of cooking and losses of micronutrients as well because micronutrients plays very important role in body functions. Daily usage of iron utensil does not affect the sensory quality of food. Regularly intake of food cooked in iron utensil increased appreciable amount of iron content. People also need to be aware about the bio fortification of some foods with micronutrients that may easily leach into water through utensil inner surface like clay pot amid the cooking period. A well-seasoned cast iron cookware which helps us to use less oil. The more often cooking is done, the more it becomes seasoned. The versatility and durability of iron cookware show signs of improvement with age.