1Department of Integration of Chinese and Western, the First Affiliated Hospital of Nanchang University, Nanchang, China

Objective: To observe the therapeutic effects of azathioprine (AZA) on Immune Complex-Combined TNBS/Ethanol method induced ulcerative colitis (UC) in rats and to explore its possible mechanism.

Methods: 64 Wistar rats were divided into 2 groups. Normal control group (n=12) was injected with saline and model group (n=52) was set up by immune complex-combined TNBS/ethanol. 4 rats were sacrificed to observe the macroscopical focus of infection in bowels in 3 weeks and UC model was taken out. The UC model rats were randomly divided into model control group, AZA low, medium and high dose group 1, 2.5, 5 mg/kg, respectively. All model rats were daily injected (caudal vein) with corresponding drug for consecutive 4 weeks. During the 4-week treatment, disease activity index (DAI) were observed. At the end of treatment, morphological observation was carried out on rats' colon (colonic mucosal damage index (CMDI) scores and histological score (HS)); IL-6, IL-8, IL-17 and TNF-α were determined by ELISA and the expression of p-selectin in the colonic tissues was detected using immunohistochemistry (IHC).

Results: The DAI, CMDI and HS of the model group were significantly higher than that of the normal control group (all p<0.01), indicating successful establishment of UC model. The DAI, CMDI and HS of the group treated with AZA were lower than those of the model group (DAI, HS: p<0.05; CMDI: p<0.01). Immune Complex-Combined TNBS/Ethanol significantly elevated IL-6, IL-8, IL-17, TNF-α levels in serum as well as the p-selectin expression group in colon tissue compared with their control group (p<0.05). The low-dose AZA group, the medium-dose AZA group, and high-dose AZA group showed significant inhibition of elevation of serum IL-6IL-8IL-17TNF-α level and p-selectin expression in colon tissue.

Conclusions: AZA can alleviate intestinal inflammation and have a therapeutic effect for UC. Its mechanisms may be related to reduce the expression of proinflammatory cytokines and thus alleviate inflammatory response.

Ulcerative colitis (UC), a sub-form of inflammatory bowel disease (IBD), is characterized by chronic nonspecific inflammation of the colorectal mucosa [1,2]. Recent research indicates that multiple genetic, environmental and immune factors take part in the pathogenesis and progression of the UC [3-5]. The use of 6-mercaptopurine (6MP) and its prodrug azathioprine (AZA) for inflammatory bowel disease (IBD) has increased in recent years. Azathioprine (AZA) was first used as a chemotherapeutic agent fifty years ago. AZA is considered the best known agent of immunosuppressant in the management of the moderate to severe Inflammatory Bowel Disease (IBD) up to the present day [6]. There is increasing evidence supporting the efficacy of AZA for maintenance of remission in Crohn’s disease (CD) [7]. Because of their slow onset of action, they are usually recommended in combination with fast-acting immunosuppressive drugs, such as steroids that cover the time period until AZA/6-MP takes full effect. Thus, it is possible that a Cochrane analysis suggests that there is no significant benefit of thiopurine monotherapy for the induction of remission in CD [8]. In ulcerative colitis (UC), current evidences indicate a similar situation for the efficacy of thiopurines for maintenance therapy [9], but not for induction of remission. Azathioprine (AZ) has been used in the treatment of refractory inflammatory bowel disease [10]. However, it is still controversial about its therapeutic effect and unclear about the mechanism by which AZ decrease colonic inflammation. Therefore, we conduct this study to investigate therapeutic effects of azathioprine (AZA) and its possible mechanism in a rat model of ulcerative colitis (UC) induced by immune complex-combined TNBS/Ethanol method.

Sixty wistar rats (weighing about 200 g, 32 male and 32 female) were purchased from the Animal Centre of the first Affiliated Hospital of Nanchang University. Ten male New Zealand rabbits (weighing about 3 kg) were purchased from Nanchang Animal Centre (Nanchang, China). The animals were housed at SPF animal room with temperature maintained at 20–24°C, 50–60% humidity under a light-controlled environment (12/12 h light/dark cycle), with free access to food and sterile tap water. All animal procedures were approved by the Animal Experimentation Committee of the first Affiliated Hospital of Nanchang University.

60 healthy rats were divided into 2 groups. Normal control group (n=12) was injected with saline and model group (n=52) was established with immune complex-combined TNBS/ ethanol. The method of immune complex-combined TNBS/ ethanol is as following: rabbit intestinal mucosal antigen solution was mixed with equal volume of Freund's complete adjuvant and made of the antigen emulsion. Each rat in model group was injected with the antigen protein 8 mg in the groin at day 1 and day 14. On day 15, rats were anesthetized with 10% chloral hydrate (0.4 mL·kg−1, i.p.). Then, TNBS dissolved in 50% ethanol was instilled quickly into the colon through a medical-grade polyurethane cannula at 100 mg·kg−1 and the rats were kept in a head-down position for five minutes to avoid leakage of the intracolonic instillation. Four rats were sacrificed to observe the macroscopical focus of infection in bowels in 3 weeks and UC model was taken out. The UC model rats were randomly divided into model control group, AZA low, medium and high dose group (1, 2.5, 5 mg/kg, respectively). All model rats were treated for 4 weeks. During the 4-week treatment, disease activity index (DAI) were observed. At the end of treatment, colonic mucosal damage index (CMDI) scores and histological score (HS) was carried out on rats' colon; IL-6, IL-8, IL-17 and TNF-α were determined by ELISA and the expression of p-selectin in the colonic tissues was detected using IHC.

Paraffin-embedded sections were stained with hematoxylineosin (HE) to evaluate general morphology and collagen formation. HE was done as previously described. To demonstrate the expression and localization of P-selectin, immunohistochemistry was used as previously described. The colon sections were incubated with P-selectin (anti-rabbit, Abcam), and detected with the secondary antibodies (CoWin Bioscience, China).

The activity of the enzyme myeloperoxidase (MPO), a marker of polymorphonuclear neutrophil primary granules, in the colonic mucosa was detected using a previously described technique.

Effect of AZA on DAI, CMDI and HS in UC rats

Table 1. Effect of AZA on DAI scores in UC rats. 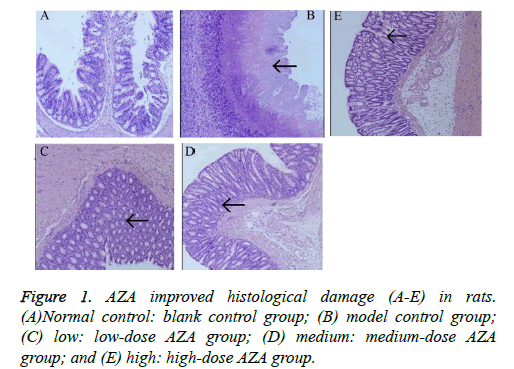 The serum IL-6IL-8IL-17TNF-α level was determined in the control rats and UC rats treated with saline, low-medium-and high-dose AZA groups. As shown in Figure 2, Immune Complex-Combined TNBS/Ethanol significantly elevated IL-6IL-8IL-17TNF-α levels in serum compared with those in the control group (p<0.05). The low-dose AZA group, the medium-dose AZA group, and high-dose AZA group showed significant inhibition of Immune Complex-Combined TNBS/ Ethanol induced elevation of serum IL-6, IL-8, IL-17, TNF-α level (all p<0.05). We further detect the expression of Pselectin in colonic mucosa by immunohistochemistry and the results indicated that the expression of p-selectin in colon tissue of model group was much higher than that of normal control group (Figure 3). After four weeks treatment with AZA, the expression of p-selectin in the low-dose group, medium-dose group and high-dose group were much lower than that in the model control group (Figures 3A-3E). 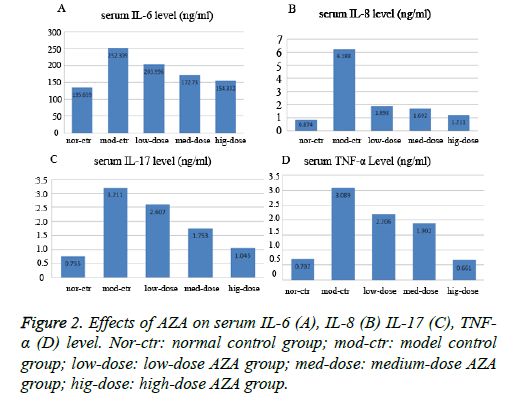 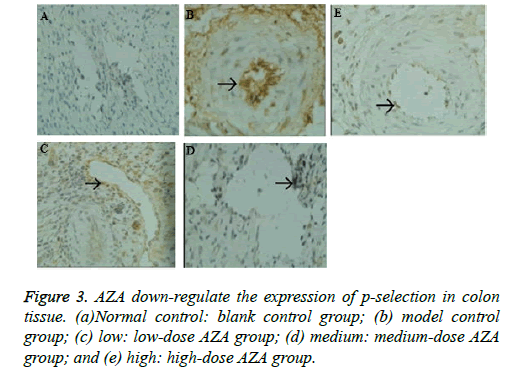 In the present study, to assess the anti-inflammatory effects of AZA, we generated an ulcerative colitis model induced by Immune Complex-Combined TNBS/Ethanol. This model is used here because it is well fitted with intermingled infiltration of T lymphocytes and B lymphocytes and similar to human UC to the maximum extent [13]. Therefore, it is an ideal model of IBD and may serve as a good tool for investigation of the pathogenesis and pharmaceutical effect of IBD from the point of view of cellular and humoral immunity.

In our study, with time, the DAI, and CMDI score increased in the model group. In the histological analysis, we found that the number of inflammatory cells including neutrophils and lymphocytes were increased in the colonic tissue of rats in the model group and that the crypts and epithelial integrity were severely injured. At the same time, the histological score increased to a significantly higher value in the model group than in the control group. After administration of AZA, DAI and CMDI scores were significantly decreased and improved. These results suggest that AZA has therapeutic effects on rats with ulcerative colitis induced by Immune Complex-Combined TNBS/Ethanol.

In addition, we also evaluated the expression of MPO in colon tissues, because it reflects the degree of mucosal neutrophil infiltration and an increase in neutrophils which is a key feature in the pathogenesis of UC [14]. As expected, Immune Complex-Combined TNBS/Ethanol significantly increased MPO activity in the colon tissue, and AZA treatment partially reversed this effect.

After observing a definite effect, we further investigated the possible therapeutic mechanism of AZA in rats with Immune Complex-Combined TNBS/Ethanol induced UC. Persistent infiltration of immune cells and intensive inflammatory response play an important role in the pathogenesis and development of UC. Previous studies [15-18] showed that cytokines including IL-6, IL-8, IL-17, TNF-α levels in serum were higher in patients with UC than in healthy controls. In the present study, abnormally high levels of IL-6, IL-8, IL-17, TNF-α was observed in the serum of rats with Immune Complex-Combined TNBS/Ethanol-induced UC, and treatment with AZA dose-dependently decreased serum IL-6, IL-8, IL-17, TNF-α levels. Furthermore, our results also indicated that p-selectin expression was elevated in model group, compared with normal control group, which is consistent with a previous study showing higher concentrations of p-selectin in the serum of UC patients with active disease [19]. The role of p-seclectin is to capture circulating leucocytes in the early extravasation process [20]. Therefore, it mean that AZA have an effect on reduce mucosal neutrophil infiltration.

In conclusion, our results show that tail vein injection of AZA can ameliorate immune complex-combined TNBS/Ethanol induced UC in rats. The protective mechanism may be attributed to significantly decrease the inflammatory response.