Among cereal crops, wheat (Triticum aestivum L.) is an important staple food for human. Rhopalosiphum maidis, Rhopalosiphum padi, Schizaphis graminum and Sitobian avenae are the major aphid species of wheat in Pakistan, which cause huge yield losses in wheat crop. The study was conducted to check the effect of aphid density on wheat crop and its yield. Our observation was made from heading to early-dough stage. Mean spike length, number of grains per spike, 100 grains weight and yield kg/ha was significantly affected by the population density of an aphids. Aphid density was low correlated with mean spike length but it was significantly correlated with number of grains per spike, 100 grains weight and yield kg per hectare.

Wheat (Triticum aestivum L.) is an important and healthy cereal diet which is consumed as a staple food in many parts all over the world. About 20% of the world food calories and 40% of the food demand is fulfilled by the wheat [1]. Wheat has been cultivated on 8.7 million hectares with production of 24.2 million tons in Pakistan. It shares 10.1% to the value added in agriculture & 2.2% GDP share [2]. Gluten is a protein that is present in the wheat makes it unique [3].

Aphid responds differently to different genotype of plant species while reducing the yield losses [8]. Aphid cause both direct and indirect damage by sucking the cell sap of phloem containing nitrogen contents while [9] the direct effect of aphid is promoted by directly sucking the cell sap and indirect effect is produced by secreting the honeydew that reduces the process of photosynthesis [10]. Aphid also transmits the viruses in plant (vector) Rhopalosiphum padi transmits the Barley Yellow Dwarf Virus (BYDV) by direct feeding of the host [11]. Rhopalosiphum padi can reduce the yield up to 600 kg/hectares in wheat [12]. Temperature fluctuation, aphidicide use, weeds interruption, plant density and time of sowing of wheat are the factors that influence the high population of aphid. Growing early maturing variety of wheat reduce aphid attack [13]. The time of sowing of wheat before 25th November gave high yield and low aphid population [14]. Aphid population is high in Feb-March due to the favourable host available in the wheat field [15]. Economic thresholds levels for aphid in wheat is justified, if 50 or more aphids are present in the seedling stage of the wheat. Moreover, 100 or more aphids are present during the 3-6 inches of plant height and 300 or more aphids when the plant reaches 6-10 inches in height and the visible damage of aphids is on the top terminal portion of leaves.

The main objective of our study is used to check the infestation level of aphid’s species on wheat crop and also their effects on yield.

The experiment was conducted at the Bahauddin Zakariya University, Multan, Pakistan on 16th March, 2018. The sowing time of wheat crop was 26th November, 2017 and harvesting time was 15th April, 2018. The crop was sown by broadcasting method in the field. The variety that was used in the wheat field was Faislabad-2008. The recommended dose of NPK fertilizers in the form of urea (128 kg/ha), DAP (114 kg/ha) and sulphate of potash (62 kg/ha) was applied. The infestation level of the aphids per tiller was maintained on the daily basis. The number of aphid population per tiller was maintained by the camel hair brush (between headings to early dough stage of wheat crop stage between Mid-march to end-March). The numbers of aphid was maintained at 2, 4, 8, 12, 16, and 20 aphids per tiller and were tagged. The experiment was laid out in a randomized complete block design with six treatments including control and six replications for each treatment. Treatment plots were randomly selected according to the given area in the field. Each plot size was kept as 1 m2. The 10 tillers were selected in 1 m2 plot and tagged. When the crop was matured, then wheat was harvested manually using sickle, and the produce from each treatment was tagged with the respective information and transferred to laboratory. Spike length of tillers was measured using measuring tape. Number of grains per wheat spike was calculated. Grains were manually threshed from spike and hundred grain were weight from each treatment, and the total grain weight obtained from a treatment/1 m2 was used for estimation of yield kg/ha.

Table 1. Comparison of growth and yield-related parameters (mean±SE) of wheat plots which were maintained with different aphid densities from head formation stage to early-dough stage.

Figure 1 shows that there was high correlation (RX=0.6833; Table 2) between spike length and aphid density that explained low extent of variation in spike length. 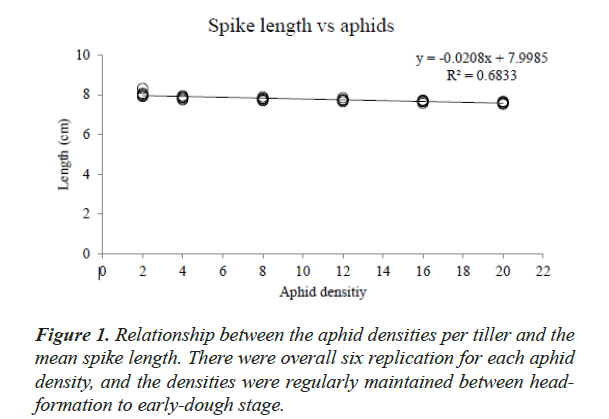 Figure 1. Relationship between the aphid densities per tiller and the mean spike length. There were overall six replication for each aphid density, and the densities were regularly maintained between headformation to early-dough stage.

Effect of aphid density on number of grains/spike 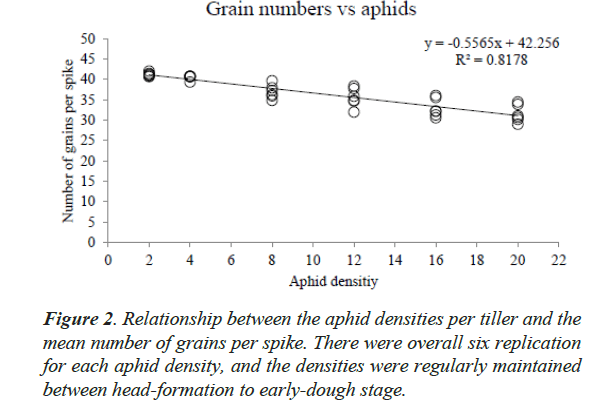 Figure 2. Relationship between the aphid densities per tiller and the mean number of grains per spike. There were overall six replication for each aphid density, and the densities were regularly maintained between head-formation to early-dough stage. 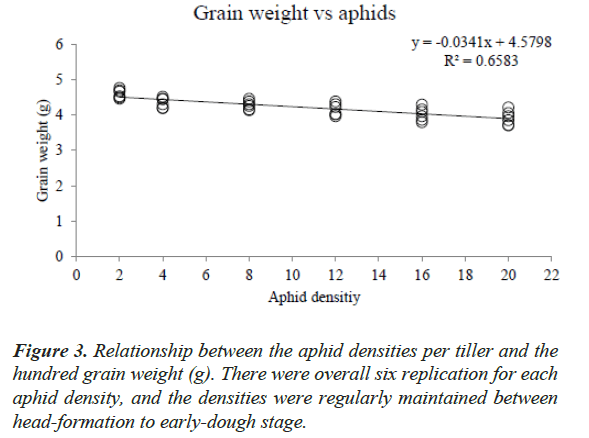 Figure 3. Relationship between the aphid densities per tiller and the hundred grain weight (g). There were overall six replication for each aphid density, and the densities were regularly maintained between head-formation to early-dough stage.

Figure 4 shows that the aphid density was significantly affected (R2=0.52; Table 2) on the yield kg/ha of the wheat. The low aphid density caused less reduction in yield. The higher number of aphid population resulted in greater reduction of yield kg/ha. 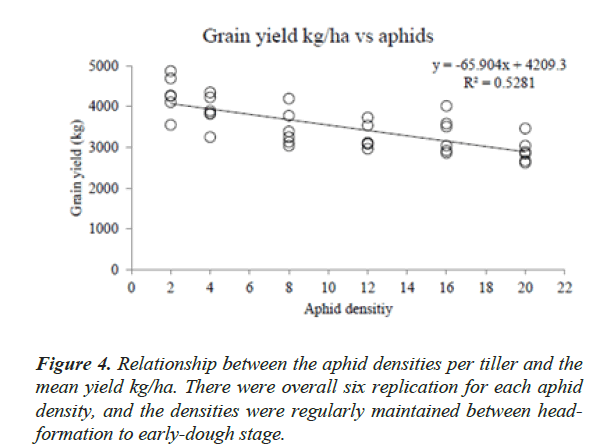 Figure 4. Relationship between the aphid densities per tiller and the mean yield kg/ha. There were overall six replication for each aphid density, and the densities were regularly maintained between headformation to early-dough stage.

It is studied that population density of aphids gradually increases when the crop reaches to the vegetative growth stage. The aphid infestation started in mid-January till the 15th of the March. Similar results were shown by Ahmad et al. [16] that was observed the aphids infestation started in first week of the February till increases up to mid of the March. While the aphid population was at peak between the heading-early dough stage on 1st April-3rd April and become reduced up to mid of the April. Our results are correlated with Chaojun and Nawaz who observed that aphids population became peak at heading stage [17,18].

In present study aphid’s population was low when the crop reaches to maturity stage. It is estimated by Riedell, [19] that infestation of aphids is greater between heading and flowering stage. In case of ripening the wheat, the aphid density gradually decreases.

Our findings showed that the mean spike length of wheat was not only the factor which effect on the yield of the crop. But number of grains per spike and the grain weight were the two important factors that cause reduction in yield. Mean spike length was literally effected the yield kg/ha. While the aphid’s population (16-20 aphids/tiller) showed the greater variation in the curve and affects the yield of the wheat crop and also reduces the grain weight and number of grains per spike respectively.

It is also studied that there was the high population density 20 Aphids/tiller during the grains development and the initiation of ripening stage. Similarly, it is correlated with the Kostyukovskiĭ and Kushnerik, 1990 [20].

The fundamental goal of our investigation is utilized to check the invasion level of aphid's species on wheat crop and furthermore their impacts on yield. Our observation was made from heading to early-dough stage. All the findings in the above study demonstrated that the mean spike length of wheat was not just the factor which impact on the yield of the harvest crop but number of grains per spike and the grain weight were the two important factors that cause reduction in yield.