#These equally contributed to this manuscript

Background: Probiotics and enteral nutrition have been shown to be beneficial in reducing the infection rate in animal experiments and primary clinical trials. The aim of this study was to examine the effects and safety of probiotics combined enteral nutrition in patients with severe acute pancreatitis.

Conclusion: These findings suggested that probiotics could play a beneficial role in the treatment of Severe Acute Pancreatitis (SAP), and combination therapy can promote the effect of therapeutic.

Severe acute pancreatitis (SAP) is an acute abdominal disease, characterized by nausea and frequently vomiting, fever, persistent abdomen pain, and elevation of plasma and urine amylase. Patients with severe complications such as systemic inflammatory response syndrome, multi-organ failure, and infections usually showed a higher death risk even if accepted the intensive treatment [1]. Many causes could lead to SAP such as gallstone, alcohol consumption, and hypertriglyceridemia, and so forth. Most of acute pancreatitis is mild types, and 20-30% of these are classified to SAP. The mortality of SAP is still up to 10%-30% [2]. The leading cause of death is attributed to Systemic Inflammatory Response Syndrome (SIRS) caused by infection, followed by Multiple Organ Dysfunction Syndrome (MODS) and secondary infection of pancreatic necrotic tissue [3]. The whole course of acute pancreatitis has three stages: acute reactive phase, overall infection phase, and residual infection phase. The majority of patients could get over acute reactive phase and entered into systemic infection phase thanks to physio pathologic and treatment technical support. During secondary systemic infection period, the primary causes of death for SAP patients are the infection of pancreas necrotic tissue and peripancreatic infected fluid and related complications. Previous studies have found that intestinal dysbacteriosis, intestine barrier functional dysfunction, and bacterial translocation are closely related to pancreas related infections above. Necrotic tissue infection can worsen the prognosis of Severe Acute Pancreatitis (SAP). For a long time, antibiotics are widely used to inhibit bacterial translocation, preventing occurrence of intestinal dysbacteriosis in clinical practice. However, the latest reports from a randomized controlled trial found that prophylactic antibiotics could not protect patients with SAP from secondary infection. The researchers turned their attention to probiotics.

Previous studies have also found early enteral nutrition could alleviate the systemic inflammatory response syndrome and some complications in patients with SAP [4,5].

Probiotics and enteral nutrition have been shown to be beneficial in reducing the infection rate in animal experiments and primary clinical trials. However, the results of some clinical trials have been contradictory due to study population, sample size and degree of disease, and so forth [6,7]. The aim of this study was to examine the effects and safety of probiotics combined enteral nutrition in patients with acute pancreatitis.

One hundred and twenty patients with SAP from our hospital were randomly assigned to either a treatment group (n=60) or a control group (n=60). We used the dynamic balancing randomization methods for grouping, and the randomization process was completed by using the software. The diagnostic criteria adopted the guide for diagnosis and treatment of severe acute pancreatitis 2014 drafted by Division of Pancreatic Surgery, Branch of Surgery, Chinese Medical Association [8].

The inclusion criterion is as following: (1) Patients’ age is more than 18 years old and less than 70 years old. (2) Patients should be sent to hospital within 24 hours. (3) Patients did not undergo surgical operation within 2 weeks. (4) Patients are diagnosed according history of disease, clinical symptom, and experimental examination followed by some complications such as organ dysfunction, pancreatic necrosis, pancreatic pseudo cyst and low clinical scores (Ransom ≥ 3 or APACHE II ≥ or Balthazar CT ≥ Stage II). The following patients are excluded: (1) Age: 18< or >70 years old. (2) Patients occurred to pancreatitis after entering into the study. (3) Patients with poor compliance. (4) Patients with malignant tumours. (4) Patients with severe cardiac, lung and renal function insufficiency. (5) Chronic pancreatitis patients. (6) Patients with obstruction of biliary tract need receive surgical operation. The study protocol was approved by the Ethics Committee of Xiangya Hospital. All persons gave their informed consent prior to their inclusion in the study.

The control group were given conventional treatment, including fasting gastrointestinal decompression, inhibition of pancreatic enzymes and gastric acid secretion, improve microcirculation, acetanilide spasmolysis, maintaining water and electrolyte balance, nutritional support, prevent infection and complications. The treatment received probiotics combined enteral nutrition on the basis of routine treatment, combined with Bifidobacterium quadruple living bacterium within 48-72 hours after the onset of AP (420 mg, Three times a day (TID)). The implementation way of enteral nutrition: To determine the total calorie of enteral nutrition with daily needs of patients, select the appropriate enteral nutrition preparation; calculate the total preparation, calculation of the average speed of infusion: if the patient feed demand is 1500 ml/day, so infusion at a rate of 62.5 ml every hour. If pausing for a few hours of feeding because of clinical examination, only received 400 ml, remaining 9 hours, then in the remaining 9 hours, feeding speed is adjusted to the (1100 ml/9 h) 12 ml/h. The next day feeding speed begins from 62.5 ml/h. Setting the maximum infusion speed is 150 ml/h. Critically ill patients were given optokinetic agents at the start of enteral nutrition: metoclopramide 10 mg Q8H intramuscular injection, improvement of gastric residual threshold to 300 ml. The enteral nutrition will not stop until the abdomen symptoms of patients disappear, the amylase comes back to normal amylase, and inflammatory necrosis is partly absorbed.

We used the APACHE II graded computer program version 5.1 for APACHE II scores. Multiple Organ Dysfunction Syndrome (MOD) was defined as two or more organs having persistently ≥ 2 Marshall sub scores for 24 despite aggressive resuscitation and organ support. Patients with SAP received contrast enhanced CT scan when on admission and evaluated the pancreatitis severity. We also recorded the duration of abdomen pain and hospitalization, rate of infection, and prognosis.

Data were reported as mean ± standard deviation for qualitative variables and as percentages for quantitative variables. Normal distribution of the continuous variables was assessed by the Kolmogorov-Smirnov test. Differences between two groups were tested by Student t test or Chi square test according to different data types. All statistical analysis was performed using SPSS version 19.0 (SPSS Inc., Chicago, Illinois, USA), figure was obtained through Grappad 6.0 and the statistical significance level was defined as P<0.05.

As shown in Table 1, the baseline information of the patients, such as gender, age, rate of alcohol, gallstone, and hyperlipidaemia was similar between the treatment and control group (P>0.05). The level of plasmas albumin and amylase are close (24.3 ± 1.98 vs. 23.5 ± 2.4; 1123.0 ± 217.0 vs. 1064.0 ± 236.0), and no significant difference were observed between two groups (P=0.050, 0.157). As shown in Table 2, the differences in APACHE II, Ranson score, STSI, and Marshall Score were not significant between two groups. The baseline data show balance, and the two groups were comparable. As shown in Figure 1, APACHE II scores decreased in control group on the 4th day until the 14th day and were further lowered in the treatment group.

Table 1: Comparisons of baseline data between treatment and control group. 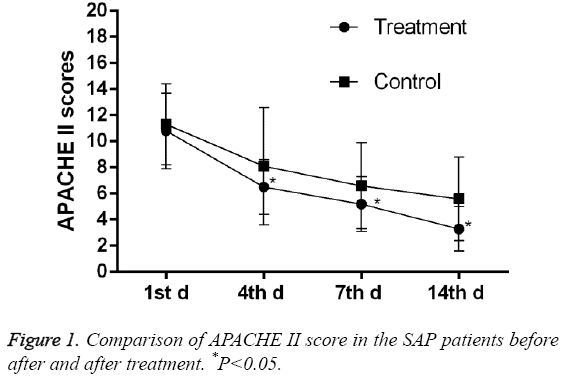 Figure 1: Comparison of APACHE II score in the SAP patients before after and after treatment. *P<0.05.

Table 3: Comparison of the rates of morbidity of albumin, amylase, pancreatic sepsis, MODs and mortality between two groups after 14 days.

Generally speaking, patients with SAP are called to restrict diet and decompress gastrointestinal, which means gastro enteric function is in a stasis status. The dysbacteriosis followed by gut mucosal barrier dysfunction would happen if this disease condition were not improved. More seriously, the barrier dysfunction of intestine makes some poisoned materials such as bacteria, endotoxin enter into blood circulation more easily, and finally cause intestinal infection, SIRS and increased mortality [9-11]. Early internal nutrition is the primary treatment for patients with SAP besides implementing acid suppression, fluid infusion, gastrointestinal decompression and pancreatic excretion inhibition, correcting electrolyte imbalances, and anti-infection [12]. It is reported that the intestinal probiotics could effectively improve and adjust the balance of intestinal micro ecology through increase the level of probiotics, inhibit pathogenic growth. However, some studies found that probiotic could become pathogenic and cause infection when human immunodeficiency occurs. Besselink et al. reported that probiotics combined enteral nutrition could increase the risk of mortality in patients with SAP [13]. This result is totally different from our study. In our results, all outcomes indictors but mortality have obvious improvement after 14 days’ treatment. The incidence of infection and hospitalization and abdomen time are lower than control. The mortality did not show significant difference, and this finding agrees with previous studies. However, this study had been proved to have major defects in study design and selection bias, and the conclusion is not reliable. The main issue is that Sand and Nor-back believed there are millions of bacteria and only small part of them could have benefits for the human organism. The selection of the probiotics based on experience and safety makes the results unreliable [14]. Besselink’s finding is undependable. Olah et al. reported that internal nutrition alone could reduce the mortality, rate of infection and MODS within 48-72 hours when patients are admitted to hospital. These results did no support the effective role of probiotics [15-17]. Capurso thought by-product generated during treatment of probiotics on SAP could exert an influence on infectious complication, but the specific products are not clear [18]. Summing up the above discussion, we notice that much work has been done about the role of probiotics in the SAP treatment, and the results still remain controversial. What we know is that function of probiotics cannot be ignored.

The present study is based on expending experiment. Early internal nutrition offer energy support for organism, does not stimulate the exocrine pancreas, and help to maintain the integrity of the structure and function of intestinal mucosa cells that will prevent bacteria and endotoxin from entering circulation. These series process would reduce the incidence of SIRS and MODS. The shorten of abdomen pain and hospitalization suggested probiotics combined internal nutrition have important adjuvant effect, and maintain the human immune response and gut integrity. The present study still has some limitations. First, our study only consisted of some evaluation indicators. More outcomes are needed such as plasma cytokine levels or endotoxin levels because it is reported that early endotoxin translocation from the gut lumen into the intestinal wall occurred and led to consequent access of gut-derived endotoxin to the mesenteric lymph node, liver, and lung [19]. Second, though there are no obvious difference in mortality, the difference of mortality between two groups are obvious, which means the combined treatment is at least no worse than the routine treatment. The present follow-up period is not enough to get certain outcomes. Our results were based on the effect of two weeks’ treatment, and longer follow-up is needed. Third, the sample size of our study is relatively smaller, but the power of our study arrives up to enough degree after calculating. Study with larger sample size is needed.