Results: With Laminaria polysaccharide, the growth of human nasopharyngeal carcinoma cell line HONE1 and CNE2 was inhibited, invasive ability of cell decreased and the cell cycle of Raji cells was blocked in G0/G1 phase with down-regulation of Bcl-2 expression and up-regulation of Bax.

Conclusion: Laminaria japonica polysaccharide can regulate the apoptosis related genes Bax and Bcl-2 through the PI3K/AKT/mTOR pathway to promote the apoptosis of nasopharyngeal carcinoma cells in the G0/G1 phase.

Nasopharyngeal Carcinoma (NPC) is one of the most common malignant tumors in our country, and it is now often treated with comprehensive therapy of radiotherapy and chemotherapy, but the side effects caused by chemotherapy should not be ignored. NPC is cancer that occurs in the nasopharynx, which is located behind your nose and above the back of your throat. NPC is difficult to detect early. Treatment for NPC involves radiation therapy, surgery or a combination.

Radiation therapy uses X-rays to prevent cancer cells in patient’s body. It is usually part of the standard treatment for NPC. It is the most common treatment strategy which people use now. Besides radiation, surgery can sometimes cure NPC if the tumor cells are removed to other parts of the body. However, the surgery can be dangerous because of the tumor’s location close to the skull. It may results to serious damage to the eye and other nearby structures. L. japonica polysaccharides (LJP) have been used for detumescence and elimination phlegm in traditional Chinese medicine has nutritional value and many functions associated to health.

Other research studies showed that polysaccharides are the biological components of LJP are natural macromolecular substances found in the intercellular or intracellular environment. LJP is considered as a kind of immune modulator that can enhance the immune function of human body to inhibit tumor biological activity with a minor side effect [1].

Several studies showed that besides anti-tumor and anti-virus properties, LJP also has anti-radiation effect. In this study, we investigated the effects of LJP in vitro on the biological activity of nasopharyngeal carcinoma cells and studied the anti-cancer mechanism through LJP’s action on the HONE1 and CNE2 cell lines. We detected LJP function on cell proliferation, cell cycle and cell apoptosis process and try to figure out the detail of LJP function on NPC treatment. It can provide new possibility for NPC treatment.

The human nasopharyngeal carcinoma cell lines of HONE1 and CNE2 of normal growth were inoculated into 5 cm × 5 cm culture bottle, IMEM medium containing 10% foetal bovine serum, 1% penicillin and 1% streptomycin was added. The above compound was cultured at 37°C with 5% CO2. Change the liquid after 48 h of conventional culture; the cells were digested by trypsin while growing to about 80% area of the culture bottle. The HONE1 and CNE2 cells at the exponential growth stage were respectively collected and the polysaccharide was added into the normal culture medium, and the drug concentration was adjusted to160 mg/L for continuous culture of 48 h. The two cell groups without laminarin treatment were named HONE1 group and CNE2 group while the two groups with the laminarin treatment were named HONE1/LJP group and CNE2/LJP group (Cells with 48 h of LJP effects were immediately conducted after the next step of the experiment).

Four groups of cells at exponential growth phase were digested and centrifugalized, and density of single cell suspension was adjusted to 3 × 104/ml with medium, 100 μl single cell suspension (edge well was added 100 μl distilled water) was added to each well of 96 wells plate respectively with a total of 25 wells of each group. After 4 h, cell adhesion was observed under the microscope. Then 5 wells taken from each group were added 20 μl 5mg/ml MTT solution and supernatant was aspirated away after a continuous culture of 4 h with each well added 150 μl DMSO, 3 min of oscillation was performed to fully dissolve the crystal (the number of 5 wells were detected every 24 h with the continuous testing of 5 d); Optical Density (OD value) was detected with micro plate reader (Bio-Tex synerg2) on the condition of 490 nm wavelength. The growth curves in various groups were drawn according to the data.

Invasive ability of cells was detected by means of transwell experiment

The upper chamber of each transwell chamber was added with 60 μl Matrigel glue of an overnight thaw at 4°C (with IMEM medium diluted at diluted six times) and was placed in temperature box of 37°C for 4 h for a period of 4 h until the coagulation of Matrigel gel. Cells at exponential growth phase in four groups were digested and centrifuged and single cell suspension density was adjusted to 8 × 104/ml with culture liquid; then 200 μl cell suspension of each group was added to each upper transwell chamber while 500 μl IMEM containing 10% FBS was added to the lower chamber; After 24 h of culture at 37°C and on the condition of 5% CO2, extra fluid was carefully flushed from the chamber and was inverted into the filter paper for 2 min; Nasopharyngeal carcinoma cells without passing through were removed with cotton swab with a fixation of 15 min at the room temperature (4% paraformaldehyde) and a dying for 20 min (0.1% liquid crystal violet staining). Cells were observed, photographed and counted after air drying; (5 fields were randomly selected from each chamber). Three replicates were established.

Cells at exponential growth phase in four groups were digested and centrifuged and single cell suspension density was adjusted to 5 × 105 ml with culture liquid. The cells were inoculated in 6-wells plates, with the cell number of each well reaching about 2 million, the cells were collected for PI staining after continuing to culture for 24 h and cells cycle of the 4 groups was detected by way of flow cytometry.

Four groups of cells at exponential growth phase were digested and centrifuged and the protein was extracted with lysate (PMSF: RIPA=1:100), and the total protein content in each group was measured by protein quantitative method. The loading quantity of protein was 50 μg. Electrophoresis was carried out with 5% separating gels and 10% concentration gels for 1 h followed by another 1 h of electrophoresis with constant 100 V. After the electrophoresis, 0.44 μm VDF membranes were adopted to conduct trans-membrane on the condition of ice bath and 2 h constant current. Then the liquid was put at 4°C overnight. Primary antibody was incubated at 4°C overnight (Bax, Bcl-2 monoclonal antibody, p-mTOR, p- AKT), the next day after washing the membrane three times (TBST twice, TBS once, 10 min/ once), incubation of the secondary antibody was conducted at 37°C (IgG antibody) for 1 h, and after repeating once the above membrane washing of 3 times with the same method, the ECL developer was adopted for exposure. Quantity One software (Bio-Rad) was applied to detect gray-scale value of straps. 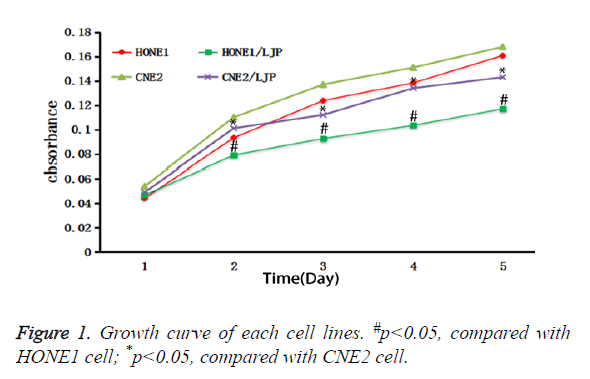 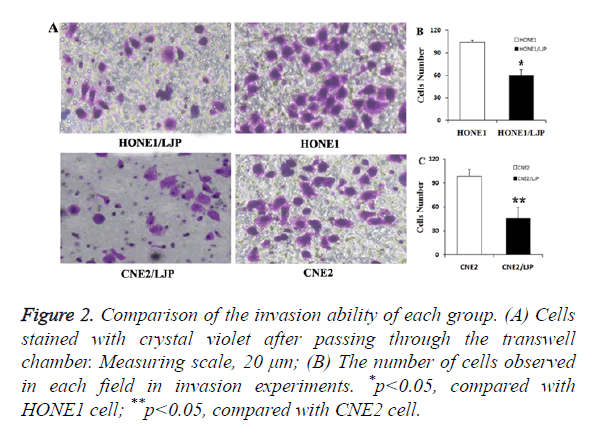 Figure 3. Effects of LPS on the cell cycle distribution in each cell line.

Experimental results of Western blot: Compared with HONE1 group and CNE2 group without the laminarin treatment, the expression of Bax and Bcl-2 (Figure 4A) were up-regulated in HONE1/LJS and CNE2/LJS group; Bax and Bcl-2 ratio increase dramatically (Figure 4B). Besides, p-AKT and p-mTOR also showed low expression (Figure 5), indicating that LJP blocked PI3K/AKT/mTOR signalling pathway, intervened phosphorylation of AKT and mTOR and finally promote the apoptosis of cells. 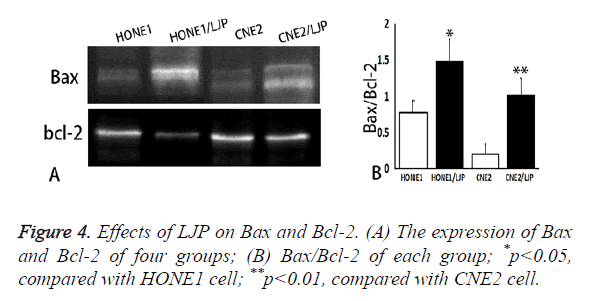 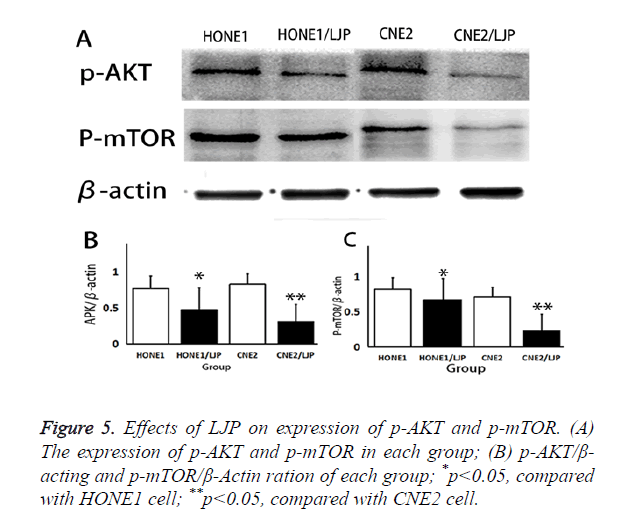 At present, the main cause of tumor is generally thought because of changes of various physical and chemical factors which leading to the unbalance of cell proliferation and apoptosis while the expression of tumor suppressor genes is down regulated with amplification of oncogene [4].

Therefore, the production, invasion and metastasis of tumor are closely related to apoptosis. Apoptosis of normal body cells is controlled by various complex signal pathways, in which once there are abnormal factors such as abnormal expression of tumor suppressor gene Bax or proto-oncogene Bcl-2, which leads to cell variation, eventually causes the generation of malignant tumors [5]. The results of this study showed that apoptosis related protein Bax and Bcl-2 of human nasopharyngeal carcinoma HONE1 and CNE2 cells were affected by Laminaria japonica polysaccharide, which up-regulated Bax and down-regulated Bcl-2, indicating that cells lines were in the process of apoptosis. Beside this, the role of laminaria japonica polysaccharide in the PI3K/AKT/mTOR signalling pathway had also been demonstrated. The LJP can inhibit the phosphorylation of AKT and mTOR by blocking PI3K/AKT/mTOR, which affects the expression of Bax and Bcl-2.

Cell cycle can be divided into interphase (G1, S, G2) and division stage (M) with two nodes (G1/S and G2/M) [6]. Xiao et al. found that LJP had good inhibitory effects on rat brain glioma cells and promoted the apoptosis of tumor cells by blocking them at G0/G1 phase [7]. Our experiment confirmed that LJP had similar function mechanism in nasopharyngeal carcinoma cells: inhibit cell cycle from G1 to S phase to reduce the number of capable of DNA synthesis cells, preventing tumor cells from synthesizing genetic materials and ultimately result in the apoptosis of nasopharyngeal carcinoma cells by affecting their growth and metabolism.

In addition, LJP can improve immune function and facilitate its recovery by enhancing the activity of macrophages and improving the prognosis of patients by intervening the immune function injuries caused by chemotherapy or radiotherapy [8,9]. Other scholars have confirmed that LJP can stimulate the secretion of interleukin-1 and promote the proliferation of thymocytes, thereby improving the cellular and humoral immunity to enhance the immune function [10]. Therefore, in view of the immune function damages caused by chemotherapy or radiotherapy, LJP can be adopted as adjuvant therapy in clinical practices to change the process of natural restoration of immune system. It has great influence on prevention and treatment of nasopharyngeal carcinoma. The mechanism on the immune system needs to be further studied.