Ecological and health risk from heavy metal exposure to fish.

Heavy metals in the gills and muscles of Sarotherodon galilaeus, Coptodon zilli, Heterobranchus isopterus and Clarias isherensis of Awara Reservoir, Ikare-Akoko Ondo State, Nigeria were assessed from February to May, 2016 using 210VGP Atomic Absorption Spectrophotometer after digestion and the values were subjected to Health Risk Index and Ecological Risk Quotient. Results revealed that the observed concentration of heavy metals was generally below the permissible limit. The trend of metal accumulation in the examined four fish species was Cd

Fisheries are the most important element in the economy of many nations as they have been a stable item and a good protein source in the diet of many people. Fishes are bio-monitors of aquatic ecosystems especially in estimating pollution of heavy metals [1]. Heavy metals pollution in the aquatic environment is a globally increasing problem because they are highly persistent, indestructible and possess the ability to bio-accumulate [2].

Fishes are suitable indicators of heavy metal contamination and are extensively used to evaluate the health of aquatic ecosystem since they are of different sizes and occupy different trophic levels [3]. Since fishes are at the end of the aquatic food chain they reflect the water quality and are indicators of pollution. Metals in the aquatic environment accumulate in the food chain and lead to ecological damage as well as human health risks after eating such aquatic organism [4]. Hence, monitoring the contamination of fish tissue is important as early warning indicator of water quality contaminations [5] and helps taking rights actions in the interest of public health and the environment.

The quality of aquatic environment (including Awara reservoir) is being degraded as a result of anthropogenic activities. Since fish is important in human diet especially in the area, this study determined the concentrations of Cd, Cr, Cu, Mn, Zn, and Pb in fishes of Awara water reservoir in Ikare- Akoko Ondo state, Nigeria and to provide a baseline information on the background levels, concentration pattern, ecological and health status of Sarotherodon galilaeus, Coptodon zilli, Heterobranchus isopterus and Clarias isherensis in the aquatic ecosystem.

Awara Reservoir in Ikare-Akoko, Akoko North-East Local Government Area of Ondo State Nigeria was built in 1956 to supply 6.7 million litres of portable water to the people of Ikare- Akoko and Akungba-Akoko in Akoko South-West and Arigidi- Akoko in Akoko North-West area of the State. The Reservoir falls within Latitude 5°30ꞌ and 6°00ꞌ North and Longitude 7°30ꞌ and 8°00ꞌ East. It was constructed from River Asanodi whose tributaries are Oyimo River, Elemoro River and Awara River and a lot of agricultural activities are carried out in the immediate environment (United Nations Industrial Development Organization, 2013). The reservoir has a catchment area of 1.984 x 106 m2 and an undulating terrain with outcrops of rocks. The minimum and maximum flood discharge of the Reservoir is 0.0098 m3/s and 0.1607 m3/s respectively. The minimum and maximum water level of the Reservoir is 371.85 m and 379.85 m respectively [6].

Gill nets (ranging between 0.16 mm-3 mm) were used to catch fishes monthly between 16.00 hrs and 7.00 hrs from February 2016 to May 2016 with the assistance of artisanal fishermen. The specimens were preserved in ice chest and transported to Fisheries and Aquaculture Technology Laboratory of the Federal University of Technology, Akure for sorting and identification. Fish samples were identified to species according to Adesulu and Syndenham [7] and Olaosebikan and Raji [8].

Adhering substances were removed from the fishes by rinsing with distilled water. Also the gill was separated from the muscle. The gills and muscles were separately oven-dried at 105°C for eight hours in a Gallenkamp moisture extraction oven. The samples were grounded into powder, homogenized and digested as described by Sani i.e. 5 g of each homogenized samples were weighed into a 200 ml Kjeldahl digestion flask and digested with 20 ml of mixed concentrated nitric acid and 62% perchloric acid (ratio 2:1) on a heater. Afterwards, the mixture was heated until the dense white fumes that indicated the disappearance of nitric acid appeared. The solution was further transferred to a 250 ml volumetric flask that was subsequently made up to volume with deionized water and the metal concentrations in each sample were determined using AAS bulk (210VGP) according to AOAC, 2006 [9].

Concentration of chemicals above permissible limits in the aquatic media reveals high levels of ecological risks. These associated risks must be numerically evaluated for quantification and interpretation. ERA/ERQ was therefore calculated using the following equation:

This gives a quantitative knowledge of risk that each contaminant poses to the health of the fish consumers. It was calculated as:

M is the concentration of metal in fish (mg/kg),

Mean ± SD in the same row with homogenous superscript are not significantly different (P>0.05)

Table 1. Concentration of Heavy metals in the gill and muscle of fish. 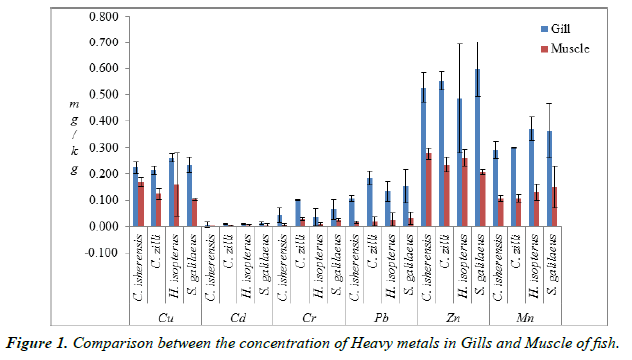 Figure 1: Comparison between the concentration of Heavy metals in Gills and Muscle of fish.

The ecological quotient of the heavy metals as presented in Figure 2 show that the metals examined had no significant ecological risk as the values of ERQ were below one (1) except for Mn in H. isopterus (1.00) and S. galilaeus (1.02) which were above the risk limit of one (1). 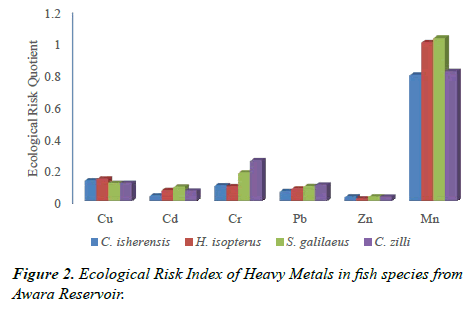 The HRI of the examined metals in all the species (Figure 3) shows that no health risk was associated with the four species as the values were below 1. Also, Figure 3 revealed that Pb had the highest values in all the species in the ascending order of C. isherensis < H. isopterus < S. galilaeus < C. zilli while the minimum concentrations were observed in Cr. 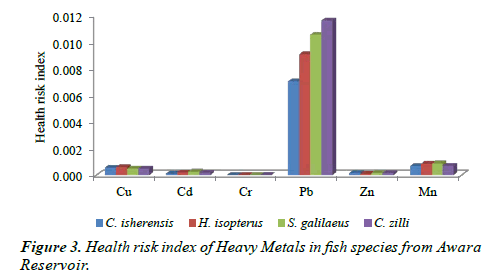 The analyzed metals were significantly higher (p<0.05) in the gills than the muscles. This is partly because the gill is naturally endowed with physiological and anatomical properties which must have maximized the absorption efficiency of the heavy metals from the aqueous phase. This is in line with the findings of Eneji et al. [16] and Fafioye et al. [17] from River Benue and Ogun River respectively. Olusola and Festus [1] opined that gill is the organ that accumulates the highest concentration of metals since it is a metabolically active part, being a dominant site of gas exchange and responsible for acid-base balance, ionic-regulation and nitrogenous waste excretion for fishes (and other aquatic organisms) thereby serving a throng of vital functions for these organisms while Adefemi et al. [18] and Eneji et al. [16] reported that muscle does not act as an active tissue in the accumulation of metals. The differences in the accumulation patterns of these minerals in the gills and muscles might be a reflection of their different metabolic pathway. Also, high concentrations of heavy metals observed in the gills than muscles can be attributed to the fact that the gill is constantly involved in physiological functions such as respiration, ion regulation and osmoregulation which entail active interactions with extraneous chemicals [10].

The results also revealed that the pattern for concentration of metals in the species was C. isherensis<H. isopterus<C. zilli<S. galilaeus. The results showed very similar accumulation pattern in the two families. However, species belonging to the family Cichlidae exhibited higher concentration of the minerals than Claridae. This could be because the two families possess different attributes in their behavioral and feeding habits. Olaifa et al. [19] opined that bio-accumulation of heavy metals in fishes could also be linked to ingestion and accumulation through the abiotic environment. This observation was similar to the report of Eneji et al. [16] on the bioaccumulation of heavy metals in different organs of C. gariepinus and Tilapia zilli from river Benue.

The results also revealed that the highest metal bioaccumulation was observed in S. galilaeus when compared with the other species. This is evident in the results of ecological risk assessment which showed that Mn posed some ecological risk to S. galilaeus and H. isopterus. Long term exposure to these heavy metals can result in negative ecological effects such as reduced breeding potential of adult fish and high mortality of juvenile fish of the species [20]. Decrease in organism’s fitness, discomfort, disorientation, imbalance, multi-system organs failure and inability to locate food as observed by Roth [20] and Krang and Rosenqvist [21] are some of the ecological implications associated with the high levels of Mn observed in the four examined species. However, the metal concentration in the gill and muscles of S. galilaeus (and the three other examined species) were within WHO [12] and FEPA [13] permissible limit.

Despite the ecological risks observed in S. galilaeus and H. isopterus, no health risk was observed for the four fish species examined in this study. Although Pb was below the risk limit, it was very high (when compared with the other metals) in the four species and long term exposure may elicit several implications such as neurological damage in children (hyperactivity, poor attention span, low IQ), declined fertility in males, inhibition and disruption of biosynthesis of haemoglobin thereby leading to insufficient transport of oxygen and anemia in man [22,23]. However, the species can be considered fit and safe for consumption, because the health risk index (HRI) were below one (1). Nonetheless, there is tendency of danger in the future depending on the agricultural development and humanmediated activities in the area because of the values observed for Pb in the four species. There may be potential hazards in the long-run if human-mediated activities in the area are not regularly monitored and controlled.

The concentration of all the heavy metals in the examined fish species was generally below the permissible limit set by WHO, FEPA and FAO in fish even though all the six metals analyzed were found. This study also established that gills bioaccumulated more metals than muscle in the four examined fish species. Similarly C. zilli and S. galilaeus (Cichlidae) bioaccumulated more metals than C. isherensis and H. isopterus (Claridae). Findings also showed that no health risk was observed for the consumption of the four fish species but ecological risk was recorded for Mn in S. galilaeus and H. isopterus. Therefore, anthropogenic activities in the area should be regulated to the barest minimum and the fisheries of the area must be constantly checked to improve the fish yield as well as diversity and to ensure healthy fish food for human consumption.