The cellular Interferon (IFN) regulatory factor-7 (IRF-7) was originally identified in cells with Epstein-Barr virus (EBV) infection, which constituted of positive circuit with viral oncoprotein latent membrane protein 1 (LMP1), and both proteins are involved in neoplasia. EBV is known to be associated with the development of various cancers, including Hodgkin lymphoma, non-Hodgkin lymphoma (NHL), Burkitt lymphoma, gastric lymphoma, and nasopharyngeal carcinoma (NPC). Although the exact role of IRF-7 in EBV-related oncogenesis is not clear, in this study, we demonstrated the role of IRF-7 in angiogenesis suppression via LMP1 down-regulation. Additionally, we employed knock down of IRF-7 and verified the inhibition of IRF-7 in NPC growth in vivo. These findings suggest that IRF-7 could be a potential therapeutic target in EBV-infected NPC tumors.

Nasopharyngeal carcinoma (NPC) is characterized by its distinct geographic distributions and is a very common cancer in the Southern and Southeast regions of China [1]. The undifferentiated or poorly differentiated NPC type is consistently associated with the Epstein-Barr virus (EBV). There is compelling evidence to suggest that EBV is a causal agent of NPC, and that EBV is likely involved in the oncogenesis of NPC [2].

EBV is a member of the herpesviridae family, also known as human herpes virus 4 (HHV-4), and was discovered by Michael Epstein and Yvonne Barr in 1964 during their research on Burkitt lymphoma (BL) [3,4]. Of note, EBV can be found in the latent stage of both lymphoma and carcinomas, and EBV is known to be associated with Burkitt lymphoma, Hodgkin's lymphoma, immunosuppression-related lymphoma, T and NK cell lymphoma, and nasopharyngeal and stomach carcinomas [5,6]. In the initiation and progression of neoplasia, the viral protein LMP1 of EBV was best recognized to be oncogenic in both B lymphocyte and epithelial cells. LMP1 is highly associated with cellular interferon regulation factors (IRF family, IRFs) in EBV transformed cells and EBV-associated tumors. However, the relationship between LMP1 and IRFs in oncogenesis is unclear.

IRF-7 is one of nine members of the interferon regulatory factor (IRF) proteins family, which was originally identified as transcriptional regulators of the type I interferon system, and the IRF proteins family has multiple functions that includes reproduction, development, stress responses, immune defense, and carcinogenesis[7-9]. To note, IRF-7 was cloned in the context of EBV latency. There is a series of evidence suggesting that IRF-7 has oncogenic properties, and IRF-7 may be an oncoprotein that interacts with LMP1 in EBV [10,11]. Furthermore, studies have suggested that the interaction of IRF-7 and LMP1 may initiate oncogenesis in EBV transformed cancers [12-14].

LMP1 is one of five key EBV-encoded viral proteins that is essential for B cell immortalization, although its expression in human epithelial cells is not normally associated with growth transformation [15-17]. Research studies have revealed that LMP1 can induce profound effects in epithelial cell, such as epidermal hyperplasia, cell motility and invasion, and the possession of oncogenic properties[15,16-18]. LMP1 is constitutively activated in various signaling pathways in EBVinfected cells, including NF-kappaB and AP-1 pathways in NPC [19]. LMP1 plays a central role in both initiation and progression of NPC, in which LMP1 modulates the expression of key tumor suppressor genes p53, modulates the G1-S cellcycle checkpoint, imparts resistance to apoptosis induces an epithelial-mesenchyme-transition (EMT), and promotes angiogenesis [15]. High expression levels of LMP1 or RAGE have been observed with higher microvessel counts in NPC tumors, and through the mechanisms involved in the induction of cyclooxygenase 2 (COX-2), hypoxia inducible factor 1 alpha (HIF-1α), and MMP-9, IL-8 [15].

Although LMP1 promotes angiogenesis in various pathways, whether IRF-7, which is intimate to LMP1, plays a role in angiogenesis in EBV-infected tumor is still uncertain. We have shown that siIRF-7 suppresses NPC tumor growth in vivo, in which siIRF-7 down-regulates LMP1 blood vessel; therefore, siIRF-7 could be a potential therapeutic target for NPCassociated tumor.

The 3-(4,5-methylthiazol-2-yl)-2,5-diphenyltetrazolium bromide (MTT) growth assay was used to measure the cell proliferation rate using a Cell Titer 96 nonradioactive cell proliferation assay kit (Promega) according to the manufacturer’s recommendations. On day 3, a total 1 × 104 live cells were collected and placed into 85 μl RPMI medium plus 10% FBS in a 96-well plate. 15 μl of dye solution was added to each well. The cells were incubated in 37°C for 4 h. 100 μl of solubilization solution/stop mix was added and incubated for an additional hour. The absorbance at a wavelength of 490 nm was recorded using a 96-well plate reader. There was no dramatic changes in cell number within the time frame, and procedures were described in a previous study [8].

Ad-siLMP1 and Ad-siIRF-7, designed sequence of LMP1 and IRF-7 via GenBank, acquired LMP1 expression vector, synthesized interference sequence specific to LMP1 and IRF-7, inserted adenovirus expression vector and gained recombinant adenovirus Ad-siLMP1 and Ad-siIRF-7, inserted siLuc into control group, and determined by the company. Procedures of siLMP1, siP53, siLuc, and siIRF-7 plasmids can be found in a previous study [20].

The NU/NU nude mice were ordered and delivered from Charles River.

Stripped tumor tissue samples from nude mice were embedded in optical cutting temperature to prepare for frozen sections, which were fixed by paraformaldehyde and sealed with 10% goat serum. DAPI to nuclear staining and antibody to LMP1 were proportionally diluted and dripped onto the tissue slides, and were coated and incubated overnight at 4°C. On the following day, the sections were rinsed with PBS three times. Secondary antibodies were proportionally diluted and dripped onto the tissue section, respectively, and incubated at 37°C for 1 h and rinsed with PBS three times. Subsequently, the slides were covered with cover slips and were observed under a fluorescence microscope at 400X magnification.

Total RNA was extracted using Trizol reagent (Invitrogen) according to the manufacturer's instructions. The RNA samples were treated with DNase I before RT reactions. 2 μg of total RNA was used for cDNA synthesis of random hexamer with reverse transcriptase (Invitrogen) (RT+) or without RT (RT-). The same amount of cDNAs was used for PCR amplification for LMP1 and Actin. For LMP1-forward gene, TCGTTATGAGTGACTGGACTGG and LMP1-reverse gene, CCTGTCCGTGCAAATTCCA. For actin gene: Actin1, 5′TTC TAC AAT GAG CTG CGT GT-3′and Actin 2, 5′GCC AGA CAG CAC TGT GTT GG-3. PCR was performed with Go Taq Flexi DNA Polymerase (Promega) following manufacturer's protocol. Different PCR cycles were used to ensure the products were in the linear ranges of the amplifications, and procedures were described in the previous study [21].

Total RNA was quantified by the NanoDrop ND-2000 (Thermo Scientific) and RNA integrity was assessed using Agilent Bioanalyzer 2100 (Agilent Technologies). The sample labeling, microarray hybridization, and washing were performed based on the manufacturer’s standard protocols. Briefly, total RNA was transcribed to double-stranded cDNA, and then synthesized into cRNA and labeled with Cyanine-3- CTP. The labeled cRNAs were hybridized onto the microarray (Figure 1). After washing, arrays were scanned by the Agilent Scanner G2505C (Agilent Technologies). Feature Extraction software (version10.7.1.1, Agilent Technologies) was used to analyze array images to obtain the raw data. Genespring was employed to carry out basic analysis with the raw data. 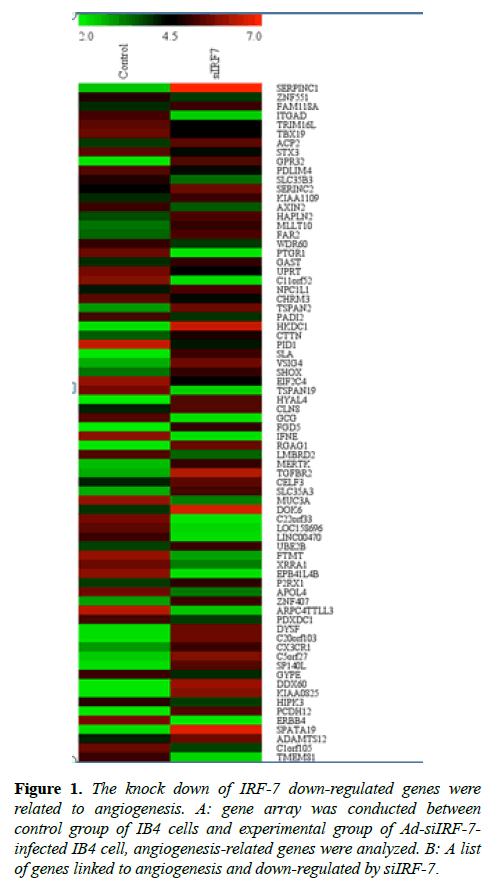 Knock down of IRF-7 down-regulated genes related to angiogenesis

IRF-7 was cloned in the context of EBV latency, and IRF-7 has an intimate relation with EBV transformation [21]. It has been well demonstrated that IRF-7 exhibited oncogenic property by phosphorylation and nuclear translocation [22,23]. Previous study revealed that knock-down of IRF-7 expression reduced the proliferation rate and enhanced apoptosis in IB4 cell line [24]. To unravel the role of IRF-7 in relation to angiogenesis, which is an essential pathophysiological process in tumor growth and metastasis, we employed gene array technique in EBV positive IB4 lymphoma cell line. Our results revealed that IRF-7 correlated strongly with genes related to angiogenesis in EBV positive cells (Table 1). The related genes consisted of GRTP1SORCS3FOXJ1, as well as other angiogenesis-related genes.

IRF-7 itself has oncogenic potential and is associated with EBV transformation in vitro and in vivo in central nervous system lymphoma [25]. IRF-7 may interact with LMP1 physically, and then induces the expression and activation of IRF-7 [26]. A recent study has unveiled that Fab-based immunoconjugate specific for the LMP1 extracellular domain inhibited NPC growth in vivo [27], and the findings implied that IRF-7 may negatively regulate tumor growth through LMP1.

To determine whether IRF-7, which is involved in angiogenesis and interacts intimately with LMP1, could be a therapeutic target in nasopharyngeal carcinoma, we implanted Ad-siIRF-7-infected C666-1 cells into Nu/Nu mice model, and observed tumor size continuously for five weeks. Results showed that knock-down of IRF-7 expression reduced tumor size of NPC in vivo as compared to the control group (Figure 2). 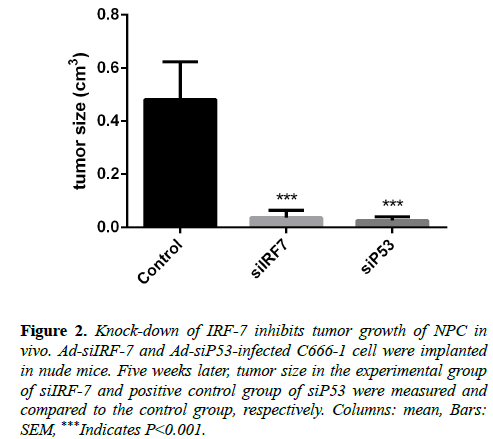 Knock-down of LMP1 suppressed tumor growth of NPC in vivo

But whether down-regulation of LMP1 expression could inhibit NPC tumor growth in vivo is of interest. We constructed Ad-siLMP1-infected C666-1 cells, implanted to Nu/Nu mice, and compared the tumor size to the control group five weeks afterwards.

We discovered that the tumor size in the experimental group was smaller than that in the control group. This finding of in vivo experiment with RNA interference to LMP1 (Figure 3) is consistent with findings from the previous study that employed LMP1 antibody to NPC in vivo [28]. 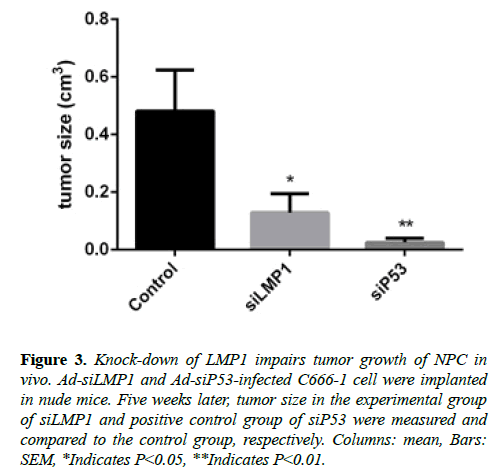 Gene array results have revealed IRF-7 to be strongly correlated to angiogenesis-relevant genes. LMP1 is involved in angiogenesis via multiple pathways that include RAGE, COX2, HIF-1α, and IL-8 [1,29,30]. To elucidate the role of LMP1 in siIRF-7-induced tumor growth suppression in vivo, we verified LMP1 expression by RT-PCR technique in C666-1 cell line and by immunofluorescence technique in tumor tissue.

The results showed that knock-down of IRF-7 (Figure 4) expression reduced LMP1 mRNA level in the cell line and LMP1 protein level around new blood vessel of tumor tissue, respectively. These results could be explained based on findings from the previous studies, in which LMP1 could influence tumor development from various aspects, including angiogenesis, invasion, metastasis, apoptosis, as well as proliferation [1-15]. Therefore, down-regulation of LMP1 may be one of the mechanisms in siIRF-7-induced tumor growth suppression of NPC in vivo. 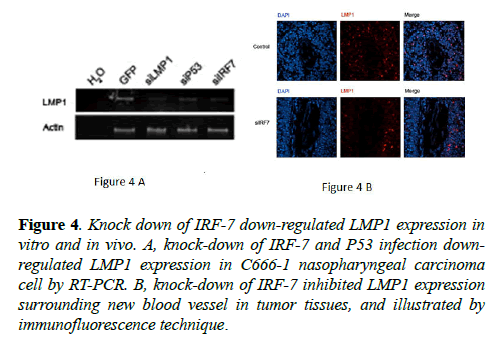 The findings reported in this study demonstrate that knock down of IRF-7 reduces LMP1 expression level in new blood microvessel, and inhibits NPC tumor growth in vivo. To our knowledge, this is the first study to investigate the functions of IRF-7 on angiogenesis in EBV-associated tumors in vivo.

Although there are an abundant of studies focused to understand IRF-7 in areas of activation, regulation, modification, function, molecular structure, protein interaction and gene level, fewer studies have examined the pathological initiation and progression of cancers with EBV latency. For instance, angiogenesis and lymphangiogenesis play essential roles in tumor metastasis and recurrence. Co-localized with IRF-7 in EBV-related cancers, LMP1 has been confirmed to be involved in angiogenesis through the induction of VEGF production in epithelial cell by COX-2, FGF-2, MMP-9, and HIF-1α [1,29,30]. Studies have found that the angiogenic chemokine, IL-8, correlates with increased angiogenesis and poor prognosis in NPC tumor by p38-MAPK, NF-kB, and ATF2 [1,31,32].

Our results indicated that IRF-7 correlates with LMP1 in new blood microvessel in NPC tumor, which is consistent with findings from a previous study that LMP1 promote angiogenesis through various pathway. For the first time, we revealed that IRF-7 plays roles in angiogenesis in EBVinfected NPC tumor. We speculate that IRF-7 is essential in the angiogenesis of pathological process in stomach carcinoma, which is another reported EBV-related epithelial cell transformed cancer.

Through the VEGF-C/VEGF receptor-3 axis, and the reported correlation with lymph node metastasis in NPC, LMP1 has been confirmed to promote lymphangiogenesis [33]. In combination to our study, we speculate that, in addition to the inhibition of angiogenesis, knock down of IRF-7 expression could suppress lymphangiogenesis in NPC. Both of these phenomenon are critical determinants in metastasis and the recurrence of tumor.

We observed the effect of knock down of IRF-7 expression on NPC tumor growth in vivo. The results are consistent and are explainable based on the suppression effect of IRF-7 on angiogenesis. Therefore, we conclude that IRF-7 could be a potential therapeutic target in EBV-related tumor.