Acetabular fractures are quite challenging injuries for the orthopedic surgeon due to low incidence and the deep and complex anatomy. A 61 y old man fell from a single-storey house and sustained a right acetabular fracture and cartilage wear. The dual-column was fixed with cannulated screw fixation via anterior ilioinguinal approach and received second surgery of open reduction and pelvic reconstructive steel plate internal fixation. His hip pain was worsened and the diagnosis was traumatic arthritis. Artificial total hip replacement of the right hip was carried out using a posterolateral approach. Our experience with this case indicates that artificial total hip replacement may need to be considered in cases with dual-column acetabular fracture and cartilage wear.

Acetabular fractures are rare injuries. Three out of 100,000 inhabitants are estimated to suffer one each year [1]. Most of the acetabular fractures result from high-energy trauma like motor vehicle accidents (80.5%) or falls from a significant height (10.7%) [2].

Over the past 40 years, the management of displaced acetabular fractures has changed from conservation to operation. Nowadays, Open Reduction and Internal Fixation (ORIF) is the standard therapy for acetabular fractures in case of a displacement of more than 2 mm [3]. Reduction accuracy correlates significantly with the clinical outcome [4,5]. Excellent or good results (assessed with the Harris hip score) [6] were recorded in 89% of the patients with an anatomic reduction, whereas 53% of the patients with a poor reduction had poor clinical results [7]. The quality of reduction is directly related to posttraumatic arthritis; anatomic reduction decreases its incidence [5]. Posttraumatic arthritis is considered as the primary complication following an acetabular fracture and may necessitate a total hip replacement [4].

In this study, we present a rare case of dual-column acetabular fracture and cartilage wear of the right hip joint in which the dual-column was previously fixed with cannulated screw fixation via anterior ilioinguinal approach and underwent second surgery of open reduction and pelvic reconstructive steel plate internal fixation. Artificial total hip replacement of the right hip was carried out in this study using a posterolateral approach.

A 61 y old man fell from a single-storey house and sustained a right acetabular fracture in October 2007. He was previously diagnosed with a dual-column acetabular fracture at a previous hospital. His injury was managed with cannulated screw fixation via anterior ilioinguinal approach after 1 w. Postoperatively, the patient developed acute right hip pain and was unable to walk. Postoperative X-ray radiograph showed malalignment. 6 w postoperatively, he complained of obvious pain and aggravated during weight-bearing and walking. The patient received secondary surgery with open reduction and pelvic reconstructive steel plate internal fixation via anterior ilioinguinal approach and posterior Kocher-Langenbach approach. In recent 3 years, his hip pain was worsened and visited to our institute on December-26-2016. X-ray radiograph obtained at his visit to our institution showed good alignment, inhomogeneous density of femoral head, femoral neck involvement, joint space narrowing in the right hip, increased density of articular surface, and old fracture of the right ischium (Figure 1). 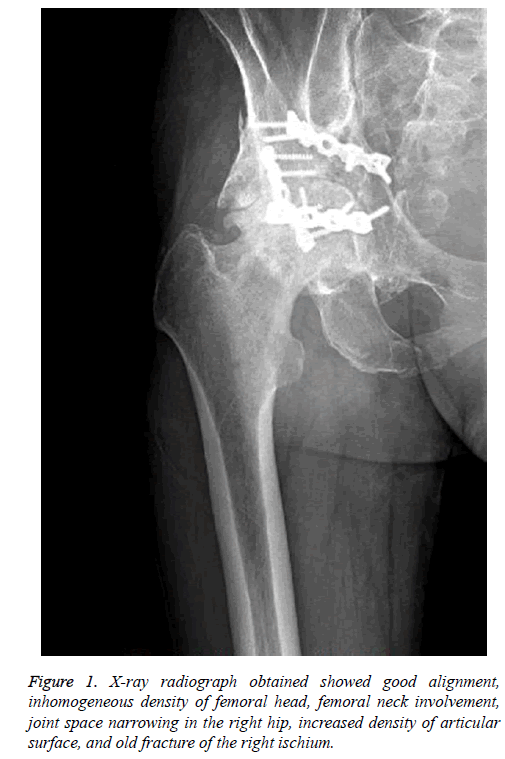 The patient was admitted to our institution on January 3, 2017. Physical examination showed two surgical scars at right hip and inguinal region (20 cm and 15 cm, respectively), 80º of right hip flexion, 0º of posterior extension, restricted internal and external rotation, 5º of adduction, and 10º of abduction. Figure “4” test was positive. No red swelling was observed. There was slight tenderness on the inguinal region. X-ray radiograph showed fair alignment, normal location of the internal fixation, inhomogeneous increase of the density of the right femoral head, femoral neck involvement, osteoproliferative edges, and joint space narrowing and blurring in the right hip (Figure 2). 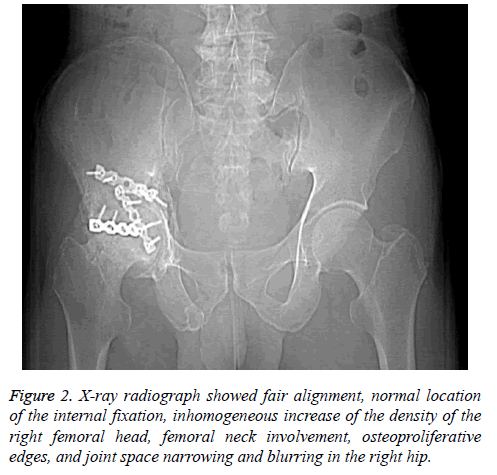 Computed Tomography (CT) image showed internal fixation shadow of the right acetabulum, fair alignment, multiple small bone shadow within the surrounding soft tissues, trabecular structure deformity, increased bone density, hardened edges, and multiple spot-like low density shadow within the femoral head and neck, joint space narrowing in the right hip, and anterior column screw drilling into the acetabulum (Figure 3). The diagnosis was traumatic arthritis of the right hip joint. The patient underwent artificial total hip replacement of the right hip under general anesthesia via posterolateral approach on January 5, 2017. After routine exposing of the hip joint, osteotomy was made on the neck of femur 1.5 cm above the lesser trochanter. Intraoperative observation showed severe acetabular and cartilage wear, exposed bone substance, and anterior column plate. In addition, two screws were observed entering into the acetabulum. Thus acetabulum cannot be burred due to the block of the anterior column plate. Incision closure was performed. After exchanging the patient position, an anterior ilioinguinal approach was used to remove the plate. The process of plate removal was relatively difficult due to the plate was wrapped with plenty of bony callus. After the removal of the implants, posterior acetabular column plate was removed after normal side of the patient was placed on the lateral position. Part of anterior column plate which not affect burr of the acetabulum was not removed. The duration of the intervention was about 100 min. Postoperatively, getriaxone and levofloxacin hydrochloride and sodium chloride injection was injected to prevent infection. Postoperative X-ray radiograph on January-6-2017 showed good position of prosthesis (Figure 4). Physical examination at 1-month postoperative follow up showed no swelling of right hip, no pain, and slight hip ache after long-distance walk. Physical examination at 2-month postoperative follow up showed previous hip ache was obviously released, hip joint can move freely, and the patient can perform daily life alone. The postoperative Harris scores was significantly improved compared to preoperative values (85 vs. 15). 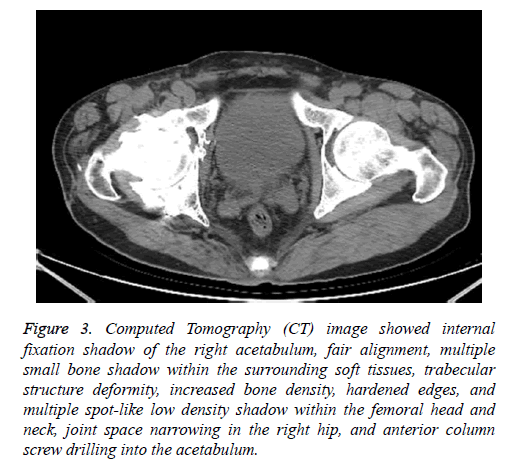 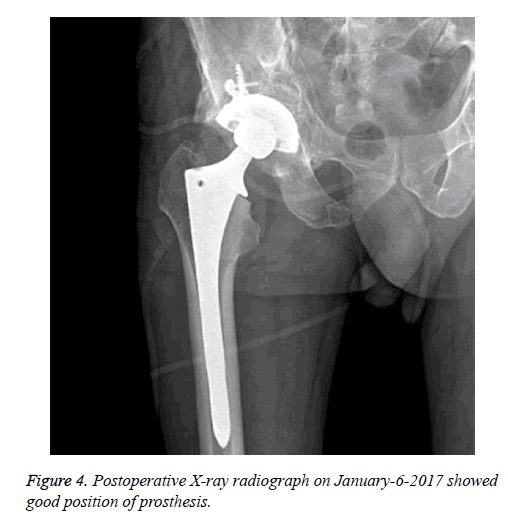 Acetabular fractures are complex intra-articular injuries that occur in a bimodal distribution, typically in younger patients involved in high-energy blunt trauma and in older patients with low-energy falls in the setting of osteoporosis. Although modern fracture management techniques allow for near anatomic reduction of these fractures, there continues to be a risk of posttraumatic arthritis [8,9]. Due to the large trauma, high risk and long learning curve of the doctors, acetabular fracture has become the nodus of osteopathic trauma.

Historically these fractures were treated conservatively, however, this has been shown to have poor outcomes with only 60% of patients mobilizing independently at 1 y [10]. Open Reduction Internal Fixation (ORIF) provides the mainstay of treatment within the literature [10,11]. However, there are a number of factors that can contribute to a poor outcome following ORIF. Primary total hip arthroplasty has been advocated in appropriately selected patients [12] and can be augmented by ORIF [13] if necessary. The use of porous coated metal acetabular components for total hip arthroplasty in these patients has also been described [14]. Management of posttraumatic arthritis of the hip after acetabular fractures with THA has demonstrated a propensity for revision as compared with THA for nontraumatic OA [8,15,16].

For the treatment of post-traumatic arthritis of the hip joint, the current primary treatment is to limit the activity and reduce weight-bearing at the early stage. For patients with disease progression, only total hip replacement can be used to relieve symptoms if there is significant pain, limited activity, and stenosis between the joint spaces confirmed by X-ray and CT examinations.

In the treatment of early surgery, fracture anatomical reduction is the fundamental guarantee for the long-term effect of fracture. Reduction accuracy correlates significantly with the clinical outcome [4,5]. The difficulty of the operation in this study is: 1). In the course of operation, when the anterior plate and screw were removed, the operation of the anterior two surgeries produced massive local scar hyperplasia, which need to be carefully operated to prevent the injury of the femoral nerve and femoral artery; 2). Because of massive osteophyte hyperplasia in the anterior part of the acetabulum, it should be fully removed, so as to avoid the occurrence of dislocation of the femoral neck and the acetabular rim. In the removal of the anterior inferior acetabular bone, we placed the acetabular component correctly and set aside 2 mm in the prosthetic margin of the plane bone, all the osteophytes were removed completely from the plane of the prosthesis. After the prosthesis has been put in place, the joint activity was tested to ensure that the prosthesis without impact.

In conclusion, our experience with this case indicates that artificial total hip replacement may need to be considered in cases with dual-column acetabular fracture and cartilage wear.

The study was approved by the Ethics Committee of Pizhou Dongda Hospital. Written informed consent was obtained from the subject before the surgical procedures and for the use of personal information for research purposes.