Drainage versus no drainage after laparoscopic cholecystectomy for acute cholecystitis: a meta-analysis

Objective: To conduct a Randomized Controlled Trial (RCT) meta-analysis to assess the effectiveness of drains in reducing complications after Laparoscopic Cholecystectomy (LC) for acute cholecystitis.

Methods: An electronic search of PubMed, EMBase, Science Citation Index, and the Cochrane Library from January 1990 to January 2016 was performed to identify randomized clinical trials that compare prophylactic drainage with no drainage in LC for acute cholecystitis. The outcomes were calculated as Odds Ratios (ORs) with 95% Confidence Intervals (CIs) using RevMan 5.2.

Conclusion: Placement of drain is not beneficial for the prevention or reduction of postoperative morbidities after emergent laparoscopic cholecystectomy and can even increase postoperative pain.

Laparoscopic Cholecystectomy (LC) is widely acknowledged as the definitive management for either elective cholecystectomy or emergent cholecystectomy [1-3]. With the advent of LC, the use of the drainage of the hepatic bed after LC may be justified because of the increased incidence of biliary injury and, consequently, bile leakage. Prophylactic drainage after abdominal surgery has been widely used either to detect early complications, such as postoperative hemorrhage or leakage, or to remove collections such as ascites, blood, and bile. However, evidence-based data do not support the routine use of prophylactic drainage in many abdominal surgery procedures [4-6]. Actually, it is now considered that prophylactic drainage is not necessary after elective LC for chronic cholecystitis [7].

However, prophylactic drainage after LC for acute cholecystitis is still controversial. Many surgeons habitually placed an abdominal drain after emergent cholecystectomy, without any doubt regarding the actual effectiveness of drainage [8]. Nevertheless, some surgeons advocate that drainage of the abdominal cavity has no advantage for detecting bile leakage or bleeding, and it is not helpful for preventing postoperative morbidities. Recently, some studies [9-12] have indicated that routine drainage is not needed to prevent postoperative after surgery for acutely inflamed gallbladder. There is no solid evidence to support routine abdominal drainage after LC for acute cholecystitis. For this reason, we conducted this meta-analysis with the aim to assess the helpfulness of the routine use of drainage in reducing morbidities after emergent LC.

The methods for the analysis and generation of inclusion criteria were conducted in accordance with the PRISMA guidelines [13]. An electronic search of PubMed, Embase, the Science Citation Index, and the Cochrane Library from January 1990 to January 2016 was performed to identify all of the related published RCTs comparing prophylactic subhepatic drainage with no drainage in LC for acute cholecystitis. The keywords used in the searches were as follows: acute cholecystitis, laparoscopic cholecystectomy, laparoscopy, drain, drainage. The language was restricted to English only. The citations within the reference lists of the articles were searched manually to identify any additional eligible studies.

The studies were considered eligible if they met the following inclusion criteria: (i) Randomized Controlled Trial (RCT); (ii) Patient undergoing LC for acute cholecystitis; (iii) With reported outcome comparing prophylactic subhepatic drainage with no drainage. Abstracts from conferences and full texts without raw data that was available for retrieval, duplicate publications, letters, non-randomized trials, retrospective analyses and reviews were excluded. The primary outcome, in this meta-analysis, was morbidity rate and intra-abdominal abscess. The secondary outcomes were as follow: wound infection, abdominal pain and length of hospital stay.

Two reviewers Xu and Wenjie independently extracted the relevant information from each article by a standardized form. Information regarding the characteristics of the study population, authors, publication year, study period, country, sample size, interventions and the relevant outcomes were recorded. Disagreements between reviewers regarding data abstraction were resolved by consensus. Statistical analysis of dichotomous variables was performed using the Odds Ratio (OR) as the summary statistic, while continuous variables were analysed using the weighted Mean Difference (MD). For both variables, 95% Confidence Intervals (CIs) were reported. Heterogeneity was assessed using the I2 statistic. The heterogeneity among the studies was evaluated using the Mantel-Haenszel χ2 test, with its significance set at P<0.1 and the extent of inconsistency was assessed with the I2 statistic [15]. I2 values>50% were defined as significant heterogeneity. In cases that lacked significant heterogeneity, fixed-effects models were used for the meta-analysis. If significant heterogeneity is present; the random-effects were applied. For these tests, a P-value<0.05 was considered statistically significant. The analyses were conducted with Review Manager Version RevMan 5.2.

A flow diagram for study inclusion and exclusion is presented in Figure 1. The initial searches generated 585 citations, of which 3 studies [10-12] considered to be suitable for the final meta-analysis using the stated eligibility criteria. A total of 382 patients (188 drained versus 194 non-drain patients in emergency LC). The characteristics, quality assessment, and outcomes for the included studies are summarized in Table 1. 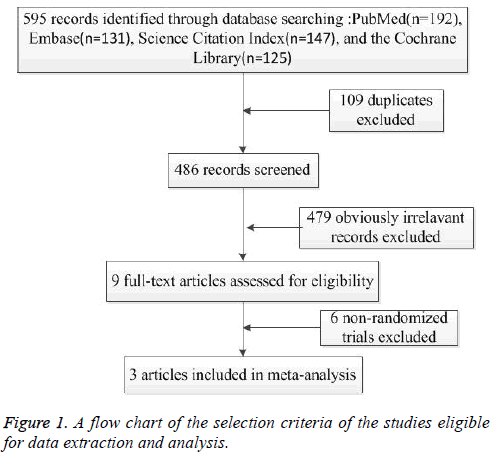 Figure 1: A flow chart of the selection criteria of the studies eligible for data extraction and analysis.

Table 1: The characteristics and quality assessment of the included studies.

Heterogeneity was not statistically significant (I2=0, P=0.80).

Because of the severe inflammation and tissue friability in acute cholecystitis, the risk of bile leakage or bleeding after LC could be increased. Therefore, prophylactic abdominal drains have been routinely used in LC for acute inflammatory cholecystitis by many surgeons for the early detection of postoperative bile leakage or any unsuspected hemorrhage and the possibility to evacuate abdominal fluid collections without the need for more invasive procedures. But this is based on traditional teaching and not on clear scientific evidence. The effectiveness of routine drainage after LC for acute cholecystitis remains controversial and debatable [16]. An experimental study [17] showed that when a drain is inserted in the peritoneal cavity that contains no fluids, it is quickly surrounded by omental tissue and completely occluded within 48 h and then loses the function of detection. Moreover, severe bleeding or bile leakage that require additional management can be rapidly diagnosed by a change in clinical symptoms or laboratory results, without the information provided by drainage. In fact, the incidence of serious complications, such as hemorrhage or bile leakage after LC performed for acute cholecystitis, only range from 0.1% to 0.9% [18,19]. Because the rate of these morbidities is relatively rare, it is expected that the clinical significance of routine drainage would be very low. In our study, there was no statistically significant difference between the drain and no drain groups in terms of postoperative morbidity, mortality, and the length of hospital stay.

The wound infection and intra-abdominal abscess rates were similar between the two groups with no significant differences. However, many authors [20,21] reported that the drain may become a bacterial entrance into peritoneal cavity, which could cause ascending infection and result in wound infection at the insertion site of the drain. Reducing the surgically placed drains is a valid method to decrease wound infection rates.

When postoperative abdominal pain was estimated using the visual analog scale, a higher pain score with significant difference was observed in the drain group than no drain group 24 h after surgery. The increase in pain by drain insertion is probably because of the irritation of the peritoneum and the skin at the entry point of the drains by a foreign material.

This meta-analysis has some limitations that should be acknowledged when considering the results. First, the number of RCTs included in this study was only three, which is considered lower quality. Second, the available data from the included studies did not enable us to perform a reliable metaanalysis about the abdominal fluid collection, operative time, shoulder tip pain, postoperative nausea and vomiting. Third, the characteristics of included patients were not consistent among studies leading to some heterogeneity in our overall analyses. In the study of Kim [10], the patients were composed of acute edematous cholecystitis, gallbladder empyema and even gallbladder gangrene. However, patients were excluded if they were gangrenous or emphysematous cholecystitis in the study of Lucarelli [11]. For all considerations of limitation, more high-methodological quality RCTs with an adequate number of patients and homogeneously collected data are warranted.

In summary, this is the first meta-analysis to assess the role of drainage after laparoscopic cholecystectomy for acute cholecystitis. We found no significant advantage of using drainage after LC. Placement of drain is not beneficial for the prevention or reduction of postoperative morbidities after emergent LC and can even increase postoperative pain. Therefore, the drainage in LC performed to treat an acute inflamed gallbladder should be avoided, except in unusual cases when intraoperative complications occur.