Does the vitreous play a role in macular X-linked retinoschisis? case report.

Purpose: Macular x-linked retinoschisis has no standard treatment yet. The case presented in this report helps to understand the role of vitreous in XLRS. Methods: Multimodal exams were performed after pars plana vitrectomy in a male, 39 years old with macular x-linked retinoschisis. We evaluated the macular schisis behavior, that changed after vitreous traction withdrawal by PPV. Results: The surgical result obtained in the right eye, suggests a possible role of vitreoretinal traction in XLRS, but more studies should be performed to achieve a better understanding of the role of vitreous in X-linked macular retinoschisis.

X-linked juvenile retinoschisis (XLRS) is one of the most common genetic causes of juvenile progressive retinal-vitreal degeneration in males [1]. Foveal schisis (retinal splitting), seen as a cartwheel pattern of folds radiating out from the fovea, is the characteristic sign of XLRS and is present in 98%-100% of cases [2]. XLRS is due to a mutation in the RS1 gene (located on the Xp22.1 chromosome) which codes for retinoschisin, a protein that helps in cellular adhesion as well as in cell-to-cell interaction [3]. Complications like rhegmatogenous and/or tractional retinal detachment (RD), vitreous hemorrhage (VH), progressive schisis involving the macula and hemorrhage within large schisis cavity can occur suddenly during the course of the disease, requiring treatment in the form of surgical intervention. There is as yet no adequate treatment for macular retinoschisis.

Male, 39 years old, referred for evaluation in November 2014 with the diagnosis of juvenile retinoschisis (RJ). The patient referred to prior laser photocoagulation in both eyes (OU). Ophthalmic examination revealed visual acuity (VA), by the Snellen test, of 20/200 in the right eye (OD) and 20/400 in the left eye (OS). Biomicroscopy of the anterior segment was unremarkable in OU. Fundus examination confirmed findings of juvenile macular retinoschisis in OU, radially oriented intraretinal foveomacular cysts are seen in a spoke-wheel configuration associated with peripheral schisis in the right eye (Figure 1). OCT showed vitreous traction associated with foveoschisis in the right eye (Figure 2a), and the absence of macular schisis and Posterior Vitreous Detachment (PVD) in the left eye (Figure 2b), drew attention to the role of the vitreous in this disease. It is possible to observe a loss of the outer retinal layers which explains the poor vision. Aiming a better understanding of the vitreous role in X-linked juvenile retinoschisis, Pars Plana Vitrectomy (PPV) was suggested in the right eye. Important to note that the patient and his family were aware of a VA limitation independent of surgical intervention. 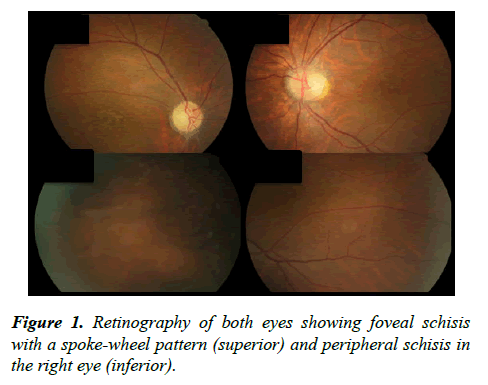 Figure 1: Retinography of both eyes showing foveal schisis with a spoke-wheel pattern (superior) and peripheral schisis in the right eye (inferior). 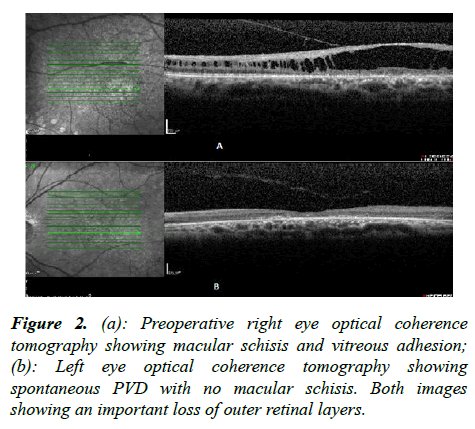 Five months after the first evaluation, PPV was performed in OD with a total hyaloid removal and placement of air in the posterior cavity. No Internal Limiting Membrane (ILM) removal was done due to macular fragility. One week after surgery, the patient maintained VA of 20/200, however, a significant improvement macular schisis was seen on OCT (Figure 3a). The patient returns two months after surgery and OCT shows the absence of macular schisis (Figure 3b). 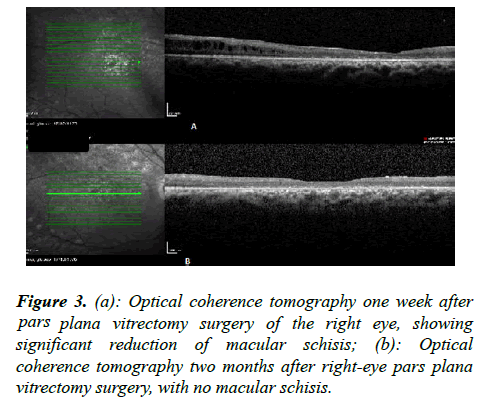 One year after surgery, a patient-reported decrease of visual acuity in OD but maintained visual acuity at 20/200 OU. Ophthalmic examination revealed cataract in OD. Therefore, phacoemulsification in OD was performed. The patient ’ s complaint was solved with cataract surgery and his VA kept in 20/200 in OD. OCT was performed after cataract surgery, which showed retinal structure maintenance (Figure 4). Two years after the vitrectomy was performed the wide-angle retinography that shows foveal schisis with a spoke-wheel pattern and peripheral schisis surrounded by photocoagulation in the right eye (Figure 5). OCT after two years of PPV is shown in Figure 6. 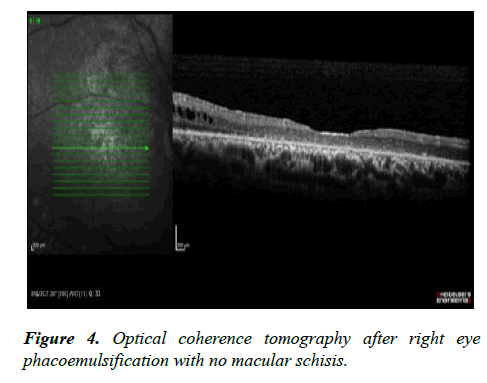 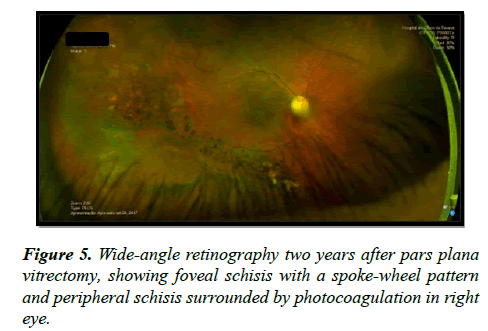 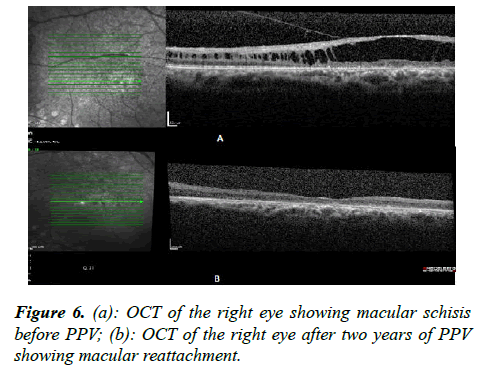 Macular x-linked juvenile retinoschisis has no standard treatment yet. Attempts have been made with clinical treatments and surgical intervention with restricted success. The main reason is that it is a genetic disease. However, the role of the vitreous in this disease is not clear. Herein, we describe a successful PPV for macular schisis in a patient whit X-linked juvenile retinoschisis..

OCT has demonstrated that the foveal schisis cavities are commonly located at the inner nuclear layer, outer plexiform layer or the outer nuclear layer. This is contrary to previous histopathologic reports that showed the involvement of the superficial retina (retinal nerve fiber layer and ganglion cell layer) [4]. Tantri et al. [5] suggested that so-called “vitreous” veils are a common feature of XLRS, and they result from the separation of the thin inner wall of a peripheral schisis cavity and inner wall holes. The veil may fragment over time. “Bridging vessels” that cross between the two walls of the schisis cavity and unsupported retinal vessels, which course directly into the vitreous, are highly prone to hemorrhage into the schisis cavity or vitreous. Wood et al. [6] discuss a longterm pattern of disease stability, mostly without conversion to other phenotypes or complications requiring surgical intervention.

There are reports about the functional and structural benefit of clinical treatment with carbonic anhydrase inhibitors that showed a positive effect on cystoid macular edema occurring in other retinal dystrophies, through their inhibiting action on the carbonic anhydrase receptors located on the membrane of Retinal-Pigmented Epithelium (RPE) cells and of neuroretinal cells, that leads to acidification of the subretinal space and thus to an increased fluid transport across the RPE, as well as to an improved retinal adhesiveness [7].

Rubinstein at al. [8] related a variation on the retinal thickness in confirmed XLRS patients with five different mutations, that’s might have a potential as an adjunct therapy in XLRS treatment and may perhaps be utilized in other causes of macular fluid retention.

Chen Zhao et al. [9] showed successful vitreoretinal surgery in affected eyes led to good outcomes. To achieve better BCVA in children, lens-sparing vitrectomy, combined with internal limiting membrane peeling was performed in every case that developed XLRS with severe complications. Ikeda at al. [10] concluded that vitreous surgery with surgically induced PVD resulted in the resolution of the retinoschisis. Because the surgery in which PVD was not induced failed to achieve reattachment, vitreous traction plays a role in the development of retinoschisis in the patients who have a lack of cell-to-cell adhesion.

The case presented in this report might clarify the role of vitreous in XLRS. The posterior hyaloid detachment in the left eye-probably induced by laser-associated with the absence of schisis, determined the decision of pars plana vitrectomy in the right eye, resulting in complete reattachment of the macula. In conclusion, the surgical result obtained in the right eye suggests a possible role of vitreoretinal traction in XLRS. Further studies should be performed in order to achieve a better understanding of the role of vitreous in X-linked macular retinoschisis. 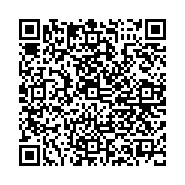