Background: The use of anesthetics propofol in certain pediatric age groups remains off-label, but it may cause neuronal apoptosis, long-term cognitive and neurological abnormalities during early postnatal period. Dexmedetomidine (Dex) can exert neuroprotective effects in rats. This study aimed to evaluate the effects of Dex and propofol on the apoptosis of neonatal rat hippocampal neurons.

Methods: Primary hippocampal neurons of neonatal rats were isolated and identified by immunofluorescence. Neurons were then divided into normal control, propofol (12 μg/ml propofol), and propofol+Dex group (12 μg/ml propofol+0.25 μg/ml Dex). The cell morphology was detected by Hematoxylin-Eosin (HE) staining. The cell apoptosis was analysed by flow cytometry and Hoechst assay. The expression of Bcl-2 mRNA and protein was determined by quantitative reverse transcription PCR and Western blot.

Conclusion: Propofol inhibited the growth and induced apoptosis of neonatal rat hippocampal neurons, whereas Dex suppressed the propofol-induced apoptosis via increasing the expression of Bcl-2. Our findings indicate that Dex in conjunction with propofol might reduce the propofol-induced neurotoxicity in pediatric patients who undergo general anesthetics, and therefore might provide an effective clinical measure against neural damages associated with general anesthetics.

General anesthesia is widely used in a variety of surgeries. Propofol is an intravenous agent that is commonly used for the starting and maintenance of general anesthesia due to its pharmacological advantages over other anesthetic agents, such as rapid effect, short action, easy arousability and few side effects [1]. The efficacy and safety of propofol as an agent for the induction and maintenance of general anesthesia as well as sedation for children has been established in several clinical trials [2-4]. Propofol has received Food Drug and Administration (FDA) approval for induction of anesthesia only in children ≥ 3 y of age and maintenance of anesthesia in children ≥ 2 months of age [5]. The human brains develop rapidly from the embryonic period to 2 years after birth [6], and are extremely sensitive to anesthetic drugs. Therefore, the pediatric use of propofol in certain age groups remains off-label [7], despite that the FDA issued a warning on the off-label use of propofol in children in intensive care units [8].

Moreover, there have been discouraging literatures regarding its use in pediatric patients because propofol may cause neuronal apoptosis during the period of rapid development [9-11]. Propofol, administered during the early postnatal period, induces long-term cognitive and neurological abnormalities in neonatal rats [12].

Dexmedetomidine (Dex) is a highly selective agonist of α2- adrenergic receptors that can produce sedative, analgesic, sympatholytic effects without risks of respiratory depression [13]. When administered as an adjunct to general anesthesia, Dex not only minimizes the cardiovascular side-effects such as hypotension and bradycardia, but also reduces the required dosage of anesthetics [13-17]. Dexmedetomidine (Dex) can exert neuroprotective effects in rats [17]. Nevertheless, the benefit of Dex administration in conjunction with propofol for neurite growth and synapse development in neonates who underwent general anesthesia remains poorly studied. In this study, we isolated hippocampal neurons from neonatal Sprague-Dawley (SD) rats and investigated whether propofol could affect the growth of in vitro cultured hippocampal neurons. We further evaluated the effects of Dex on neuronal apoptosis when administrated in conjunction with propofol. Our study aimed to provide a theoretical basis for the clinical application of Dex as an adjunct to propofol for general anesthesia in pediatric patients, especially in neonates.

Neonatal SD rats were sacrificed by cervical dislocation. The brain was removed and put in per-chilled Hank's Balanced Salt Solution (HBSS). The pia mater and blood vessels were removed, and the bilateral hippocampus was isolated under an inverted microscope. The hippocampus was incubated in 0.125% trypsin at 37°C for 10-15 min, rinsed twice with HBSS, and prepared into cell suspension in DMEM containing 10% FBS. The cell suspension was filtered through a sterile 70 μm filter, and seeded into DMEM supplemented with 10% FBS, 1% sodium pyruvate and 1% Gluta Max. After 4 h, the medium was replaced with neurobasal medium containing 2% B27 and 1% Gluta Max. Half of the medium was replaced every 3 d.

Hematoxylin and eosin (HE) staining

Cells in different groups were fixed with 4% paraformaldehyde for 15 min, stained with hematoxylin for 3 min, differentiated with hydrochloric acid for 15 s, treated with 1% ammonia for 15 s, and counterstained with eosin for 3 min. The slide with cell monolayer was removed from each well, dehydrated in serial ethanol, sealed in neutral resin, and observed under an inverted microscope.

Cells were seeded in 6-well plates with sterile coverslip and incubated until 70% confluence. Cells were then incubated for 48 h in regular medium or medium with 12 μg/ml propofol or 12 μg/ml propofol+0.25 μg/ml Dex. The coverslip was removed from the plate, fixed with 4% paraformaldehyde for 10 min, rinsed with PBS, and stained with 0.5 ml Hoechst 33258 for 5 min. The coverslip was then put on a slide with fluorescent quenching agent, and observed under a fluorescence microscope (excitation wavelength: 350 nm and emission wavelength: 460 nm).

Cells in different groups were treated in lysis buffer (Beyotime, Shanghai, China) for 30 min. Total protein was obtained by centrifugation at 10000 rpm/min, 4°C for 10 min, and quantified using BCA Protein Assay Kit (Beyotime). Equal aliquotes (50 mg) of protein were then separated by 10% SDSPAGE and transferred to polyvinylidene difluoride membranes. Membranes were blocked with 5% skim milk for 30 min, and successively incubated with rabbit anit-Bcl-2 antibody overnight at 4°C and with HRP-conjugated secondary antibody at room temperature for 30 min. The immunoreactivity was detected using the ChemiDocTM XRS gel imaging system (Bio-Rad, USA). The relative expression of proteins was quantified using Quantity One 4.6.1 software (Bio-Rad) with GAPDH as the internal reference.

Dex reversed the inhibitory effect of propofol on neuronal growth

The expression of MAP-2, a neuron-specific marker, was detected by fluorescence staining. As shown in Figure 1, the in vitro cultured cells were positive for MAP-2, indicating the successful isolation and cultivation of primary hippocampal neurons. Further, the hippocampal neurons were allocated to control, propofol and propofol+Dex groups, and the morphology of cells in different groups were compared by HE staining. As shown in Figure 2, a large number of pyramidal cells with abundant cytoplasm and big nucleus were observed in the control group. The cells in propofol group were clearly smaller compared with control group. In contrast, the cell morphology in propofol+Dex group was similar to that in control group, suggesting that propofol had inhibited the development of hippocampal neurons, whereas Dex reversed such effect. 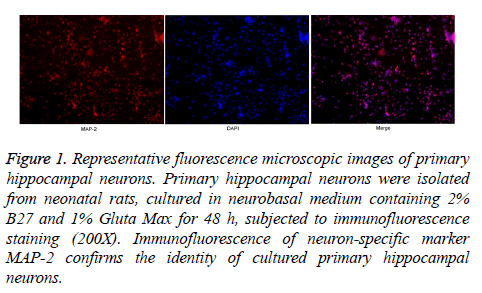 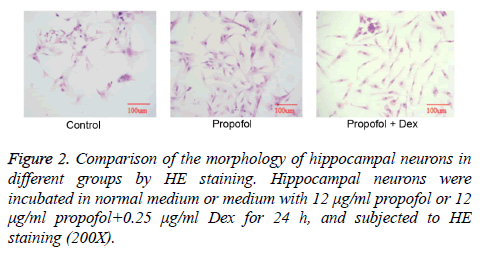 Dex reduced the stimulatory effect of propofol on neuronal apoptosis

The morphology of cells in different groups was observed under TEM. As shown in Figure 3, cells in the control group had large nucleus with irregular nuclear membrane and little heterochromatic chromatin. In contrast, the cells in propofol group were markedly smaller. Increased heterochromatic chromatin and broken cell nucleus were observed. The number of synapses of hippocampal neurons was obviously lower than that in control group. The cells in propofol+Dex group exhibited large, round nucleus with smooth nuclear membrane, clear nucleolus, and little heterochromatic chromatin, and had clearly more synapses compared with control group. The cell apoptosis in each group was compared by both annexin V-FITC/ PI staining and Hoechst staining. It was found that the apoptosis rate and proportion of Hoechst-positive cells in propofol group was significantly higher compared with the control group (p=0.023 and 0.036, respectively). The propofol +Dex group exhibited significantly lower apoptosis rate and Hoechst-positive rate than those in propofol group (p=0.016 and 0.028, respectively, Figure 4). All together, these observations suggested that propofol had stimulated the apoptosis of hippocampal neurons, and Dex exerted protective effect against such effect and reduced neuronal apoptosis. 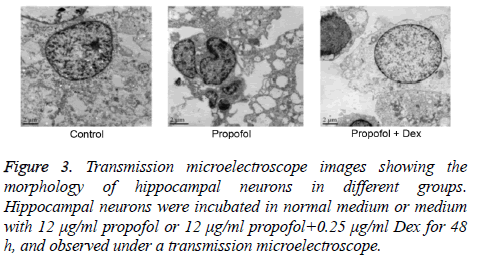 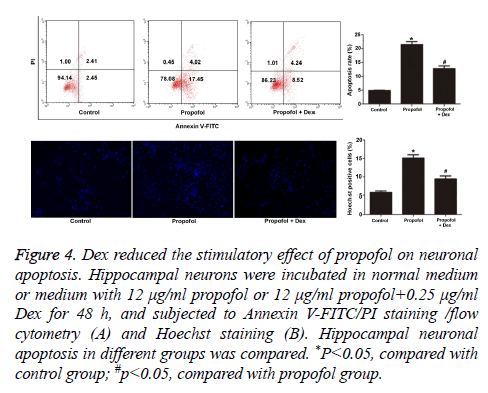 Dex reversed the inhibitory effect of propofol on Bcl-2 expression

The expression of Bcl-2 in each group was determined by qRT-PCR and Western blot analyses. As shown in Figure 5, the expression of Bcl-2 mRNA and protein in propofol group was significantly decreased compared with control group (p=0.012 and 0.043, respectively), suggesting that propofol had reduced the Bcl-2 expression in hippocampal neurons. The Bcl-2 mRNA and protein expression in propofol+Dex group was significantly higher than those in propofol group (p=0.033 and 0.026, respectively), and was comparable to those in control group (both p>0.05). These results revealed that Dex had reversed the inhibitory effect of propofol on Bcl-2 expression. 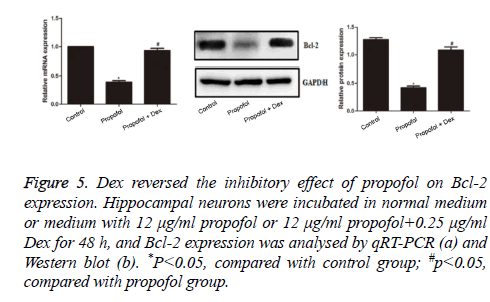 In vitro cultured primary neurons have been used as an important experimental model for a wide range of neural researches [18]. The hippocampus is one of the brain areas that are sensitive to anesthetics during general anesthesia, which may lead to central nervous damages. Therefore, we used primary hippocampal neurons from neonatal SD rats as an in vitro model to investigate the neurotoxicity of propofol and the protective effect of Dex against such neurotoxicity.

MAP-2 is a neuron-specific cytoskeletal protein that stabilizes microtubules growth by crosslinking with intermediate filaments and other microtubules during neuronal development. MAP2 is expressed mainly in neuronal axons and dendritic extensions [19,20], and thus is commonly used as a marker of neuronal phenotype [21]. In this study, we successfully isolated and cultured primary hippocampal neurons from neonatal SD rats as indicated by the strong MAP-2 immunoreactivity.

The neurotoxicity of propofol have been reported in several types of neurons, including human stem cell-derived neurons, rat prefrontal cortical neurons and hypoglossal motoneurons, as well as rodent developing hippocampal astrocytes [22-25]. Consistently, we found that propofol had markedly inhibited the growth and stimulated the apoptosis of rat hippocampal neurons. Bcl-2 is a key member of the large Bcl-2 family of regulator proteins that either induce (pro-apoptotic) or inhibit (anti-apoptotic) apoptosis [26]. BCL-2 is an important anti-apoptotic protein localized to the outer membrane of mitochondria, where it inhibits the activities of pro-apoptotic proteins and promotes cellular survival [27]. Propofol may promote the hippocampal neuronal apoptosis via up-regulating Bcl-2 expression and down-regulating protein kinase caspase-3 expression [28]. Consistently, our study also found that propofol reduced the expression of Bcl-2 mRNA and protein in hippocampal neurons when compared with control group without any treatment. Moreover, a decreased number of synapses of hippocampal neurons is known to be associated with damages in the hippocampal nerve, leading to impaired cognitive competence and memory, and aggravated anxiety of rats [29]. In this study, TEM findings revealed that propofol-treated hippocampal neurons had obviously less synapses compared with control group. All together, these results suggested that propofol had exerted neurotoxicity on in vitro cultured rat primary hippocampal neurons.

Dex acts on the central nervous system through inhibiting the activity of sympathetic nerve, which produces a variety of effects such as anti-anxiety, sedation, analgesia, etc. It also improves cognitive dysfunction, attenuates microcirculatory derangements, and reduces delirium after surgeries [30-32]. Most importantly, Dex can exert neuroprotective effects by stimulating the expression of Brain-Derived Neurotrophic Factor (BDNF) [17,33]. Intraperitoneally injected Dex can attenuate the isoflurane-induced toxicity to the brain of newborn rats via promoting Bcl-2 expression, and thus protect neural damages [34]. We detected a significantly lower hippocampal neural apoptosis rate and Hoechst-positive rate in propofol+Dex group when compared with propofol group. We also found that propofol+Dex group had a significantly higher Bcl-2 mRNA and protein expression than those in propofol group, suggesting that Dex effectively inhibited the stimulatory effect of propofol on neuronal apoptosis. Furthermore, TEM result demonstrated that propofol+Dex group had clearly more synapses of hippocampal neurons compared with control group, indicating that Dex attenuated the propofol-induced neuronal damages.

The current study is largely limited by the lack of animal studies. Our findings need to be verified using animal models. Furthermore, we only performed preliminary mechanistic study. The investigation of molecular mechanism will be our next research focus, such as whether BDNF or inflammatory cytokines are involved in the protective effect of Dex against propofol-induced neurotoxicity.

In summary, our study found that propofol inhibited the growth and induced apoptosis of neonatal rat hippocampal neurons, whereas Dex suppressed the propofol-induced apoptosis via increasing the expression of Bcl-2. Our findings suggest that Dex in conjunction with propofol might reduce the propofol-induced neurotoxicity in pediatric patients who undergo general anesthetics, and therefore might provide an effective clinical measure against neural damages associated with general anesthetics.

The animal study in this work was approved by the Animal Ethics Committee at the Jiangxi Provincial People’s Hospital.

This study was supported by the project of Guizhou Bureau of Science and Technology (project No.: LH (2015) 7389).