Ramulus Mori is the twigs of Moraceous plant Morus alba L., which is slightly bitter in taste, neutral in nature and enters the liver meridian. It is used for treatment of wind-cold-dampness arthralgia, limb spasm, beriberi, edema and pruritus due to pathogenic wind [1] and has wind-damp expelling, joint benefiting and fluid circulation promoting functions [2]. Ramulus Mori contains a variety of chemical constituents, which are mainly flavonoids, alkaloids, triterpenoids, polysaccharides, coumarins, etc. [3-5]. Its major pharmacological activities include hypoglycemic, hypolipidemic, anti-inflammatory and antioxidant ones [6-8]. In recent years, Morus alba L. has been found to have an antitumor effect, but most related studies have focused on the antitumor effect of its roots or leaves [9-11]. Mulberroside A, also known as oxidation polydatin, is a dihydroxy stilbene compound, which is present mainly in Morus plants and is a characteristic constituent of Morus alba L. Modern pharmacological research has demonstrated that mulberroside A has multiple actions such as antitussive, antiasthmatic, anti-inflammatory and analgesic properties [12]. In this study, Ramulus Mori was extracted, and its anti- HepA tumor effect was investigated. Furthermore, antitumor mechanism of Ramulus Mori was partially explored by IL-2 and TNF-α assays. This study establishes a method for quantitative determination of mulberroside A in Ramulus Mori extract, in order to effectively control the quality of Ramulus Mori extract.

Ramulus Mori was purchased from a Chinese medicinal material wholesale company in Anhui, which was identified by Professor Wang Lingkun of the Anhui University of Chinese Medicine as the dried twigs of Moraceous plant Morus alba L. Kunming mice, male, weighing 18-22 g, were provided by the SPF Center of China Medical University (batch No.: 2015072134B). Hepatoma cell line HepA was provided by the Affiliated Hospital of China Medical University.

Chromatographic conditions and systematic adaptability test: HypersiI ODS column (4.6 mm × 250 mm, 5 μm) was used. Mobile phase was methanol-water (22:78), detection wavelength was 303 nm, column temperature was 25, and flow rate 0.8 mL/min. Number of theoretical plates was not less than 2,000 calculated based on mulberroside A (Figure 1). 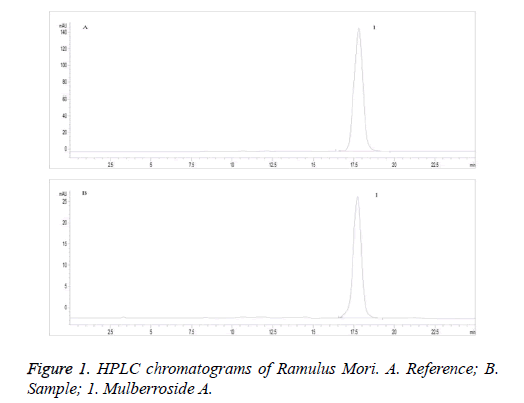 Figure 1: HPLC chromatograms of Ramulus Mori. A. Reference; B. Sample; 1. Mulberroside A.

Appropriate amount of mulberroside A reference was accurately weighed, added with 80% methanol to prepare a 0.05 mg/mL solution and shaken well to give the reference solution.

2 kg of Ramulus Mori was extracted by heat reflux with 20 L of 95% ethanol for 1 h three times, and then solvent was removed under reduced pressure until no ethanol was smelt. The resulting extract was extracted successively with petroleum ether, dichloromethane and n-butanol, then n-butanol fraction was recovered, and solvent was removed under reduced pressure. The resulting extract was lyophilized into a powder, which was precisely the Ramulus Mori extract.

Ramulus Mori extract was taken and pulverized (passed through a 60-mesh sieve), about 0.1 g of which was then accurately weighed, placed in a stoppered conical flask, added accurately with 100 mL of 80% methanol, stoppered, weighed, sonicated for 1 h, allowed to cool and reweighed. After replenishing the weight loss with 80% methanol, the solution was shaken uniformly and filtered to give the sample solution.

Appropriate amount of mulberroside A reference was accurately weighed and prepared into 6.4, 12.8, 25.6, 38.4, 51.2 and 64.0 μg/L reference solutions. Under the above chromatographic conditions, each 10 μL of the reference solutions was precisely drawn and injected into the HPLC system. Peak areas were recorded, and standard curves were plotted with peak area Y as the ordinate and reference concentration as the abscissa. Linear regression was performed to obtain the regression equation as: Y=2771.7X-1.2087 (r=0.9998). The results indicated that mulberroside A had a good linearity within 0.064-0.640 μg. The results are shown in Figure 2. 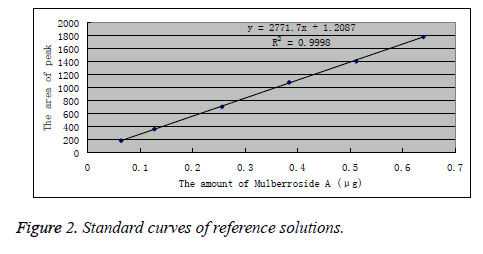 10 μL of mulberroside A reference solution was precisely drawn and injected repeatedly six times. RSD of reference peak area was measured to be 0.98%, indicating good precision.

Each 5 μL of the same Ramulus Mori sample solution was precisely drawn and determined at 0, 1, 2, 4, 8, 12 and 24 h, respectively, under the above chromatographic conditions. RSD of mulberroside A peak area was measured to be 1.89%, indicating good stability of the sample within 24 h.

Six aliquots of Ramulus Mori sample solutions were prepared in parallel and determined separately for mulberroside A content under the above chromatographic conditions. RSD of mulberroside A peak area was found to be 1.26%, indicating good reproducibility of the present method.

Six aliquots of 10 mg of Ramulus Mori sample with known content were accurately weighed, placed in stoppered conical flasks, and added separately with 10 mL of 80% methanol and 10 mL of mulberroside A reference solution, then operated as per the method in the "Preparation of sample solution" and determined under the above chromatographic conditions, followed by calculation of recovery (Table 1).

Table 1: Recoveries of mulberroside A

Five aliquots of Ramulus Mori extract were prepared into sample solutions as per the method in the "Preparation of sample solution". Under the above chromatographic conditions, each 10 μL of sample solutions was precisely drawn and injected for determination of mulberroside A content, and the results are shown in Table 2.

Ascites of HepA tumor-bearing mice grown for 7 d were collected under sterile conditions, adjusted for cell density into 1 × 1010/L with sterile saline, and then inoculated subcutaneously in the right axilla of mice at 0.2 ml per mouse. Mice were randomly divided into the Ramulus Mori extract high-, medium- and low-dose groups, model control group and CTX control group. Meanwhile, a normal control group comprising normal mice was set up (n=12-14 in each group). 24 h after inoculation, intragastric administration began, while the normal and model control groups were given solvent once daily for 14 consecutive d. Mice were sacrificed on the next day after drug withdrawal. After weighing, tumors, sera, splenocytes and peritoneal macrophages were harvested for examinations.

On the next day after drug withdrawal, mice were sacrificed, tumors were removed and weighed, and tumor inhibition rate was calculated according to the formula below.

Splenocyte suspension was prepared routinely and adjusted to 5×1010/L with complete RPMI 1640 medium. 100 μl of the cell suspension was plated into each well of sterile 24-well plates, added with 100 μl of ConA (final concentration of 5 mg/L) and finally with culture medium till the volume was 1 ml and cultured in a 37, 0.05 CO2 incubator for 48 h, then centrifuged for 10 min. Supernatant was collected for radioimmunoassay of IL-2 level.

Mouse peritoneal macrophages were prepared routinely, adjusted to 2 × 109/L with RPMI 1640 medium, plated into sterile 24-well plates at 1 ml/well and cultured in a 37, 0.05 CO2 incubator for 2 h. After discarding the medium, the remaining was washed three times with FBS-Hanks solution (volume fraction of 5%) to give the monolayer PMφ, which were then added with 0.1 ml of LPS (final concentration of 5 mg/L), replenished with culture medium till the volume was 1 ml and cultured in a 37, 0.05 CO2 incubator for 48 h. Supernatant was collected for radioimmunoassay of TNF level.

Serum TNF-α and IL-2 levels were determined by radioimmunoassay.

Experimental results were expressed as ± s. Comparison among groups was done by t test.

As can be seen from the Table 4, serum IL-2 level and splenocyte IL-2 production were lower for the tumor-bearing mice than the normal controls. Ramulus Mori extract could restore the serum IL-2 level to near normal levels and enable markedly stronger splenocyte IL-2 production than the normal and model control groups. In comparison, CTX had no effect on IL-2 levels in tumor-bearing mice.

Table 4: The effect of extract on IL-2 production in serum and cultured supernatants of splenocytes from mice with tumor ± s, n=6.

Table 5: The effect of extract on TNF level in serum and cultured sepernatants of PMφ from mice with tumor ( ± s, n=6).

According to preliminary experiment, good separation could be achieved when the mobile phase was methanol-water (22:78). Mulberroside A in extract was separated by baseline, with a resolution of >1.5. Thus, this condition was finalized as the mobile phase condition of mulberroside A. Ramulus Mori was extracted with different solvents, which found that mulberroside A content was the highest in the n-butanol fraction of 80% methanol extract. Different extraction methods were investigated, such as standing overnight, heat reflux and ultrasonication, which found no significant difference in the extraction yield, so ultrasonic extraction was used. Investigation on ultrasonication time revealed that 1 h of ultrasonication was enough for complete extraction, so ultrasonic extraction with 80% methanol for 1 h was adopted. Quantitative determination results of different Ramulus Mori extracts showed that the average content of mulberroside A in extracts was 5.16%.

This study not only determined the mulberroside A content in Ramulus Mori extract, but also studied the anti-tumor activity of the extract and its immunological mechanisms. The results showed that Ramulus Mori extract markedly inhibited the HepA growth in mice at a 100 mg/Kg•d × 14 d dose, with a tumor inhibitory rate reaching 42.38%. Within a 100-800 mg/ Kg•d × 14 d range, the antitumor effect strengthened with increasing dose, indicating good anti-tumor effect of Ramulus Mori extract. In this study, a total of 7 mice died, and the mortalities in various dose groups were all lower than 20%. All mice exhibited increased body weight after medication. Experimental observation found that mice in each group were in good general conditions, with normal appearance, coat color, stool and activities. This indicated that the Ramulus Mori extract had a good safety profile under the present experimental conditions.

TNF-α and IL-2, as important indicators of immune function, play important roles in oncotherapy. Although IL-2 has no direct cytotoxicity to tumor cells, it can exert antitumor effect by modulating the immune system. TNF-α, on the other hand, has direct cytostatic and cytotoxic effects on tumor cells, which can induce tumor cell apoptosis as well [13]. A study has found that TNF-α and IL-2 had a synergistic antitumor effect [14]. IL-2 alone had no cytotoxicity to hepatoma H7202 cells, whereas TNF-α had a cytotoxic effect on H7402 cells that was enhanced with increasing dose. After combination of the two, cytotoxicity increased significantly. According to a clinical study [15], combined TNF-α and IL-2 for treatment of nonsmall cell lung cancer patients achieved good efficacy, suggesting that TNF-α and IL-2 have a synergistic antitumor effect.

This work is supported in part by a grant from the Education Department of Henan province science and technology research projects (14A320026) and the Medical Science and Technology Project of Henan Province (201503029).