Amygdalin, belongs to one of the cyanogenic glucosides (Figure 1), is widely distributed in the plant kingdom, especially in the seeds of Rosaceae plant with higher content than those of non-Rosaceae species [1-4]. The molecular formula is C20H27NO11, consisting of one unit of Hydrocyanic acid (HCN), one unit of benzaldehyde and two units of glucose. Amygdalin itself is non-toxic, but its production HCN decomposed by some enzymes is poisonous substance, which has some protective effects on plants [5]. Pharmacological studies demonstrated that amygdalin has many bioactivities such as renal fibrosis and angiogenesis inhibition [6,7], endocrine regulators [8], anti-atherosclerotic, gastroprotective and immunomodulatory effects [9-11], neuroprotective and neuritogenic activities [12]. As a component of antitumor and anticancer drug, amygdalin also has increasingly attracted many people's attention [13-19]. 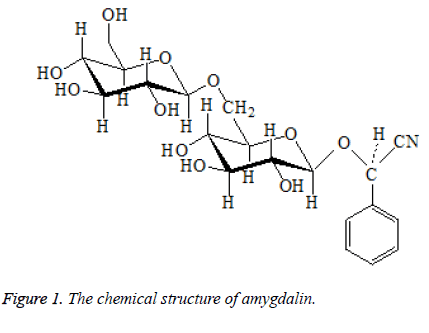 Figure 1: The chemical structure of amygdalin.

At present, the studies on the extraction, identification and pharmacological effects of amygdalin were mainly focused on the kernel of Prunus amygdalus [20-23], Prunus armeniaca [24-28], Prunus persica [29] and Prunus salicina [30], with few concerning on the fruit of Eriobotrya japonica [31,32]. The objective of this study is to determine the content of amygdalin in loquat fruit by High Performance Liquid Chromatography (HPLC).We anticipate that the information obtained in this research can serve as foundation of future studies to provide a theoretical basis for the evaluation of the health effects of loquat fruit and comprehensive utilization of waste materials during loquat fruit processing.

Amygdalin standard compound was obtained from Sigma Chemical Company (St. Louis, MO, USA). HPLC grade methanol was purchased from Caledon Company (Georgetown Ont., Canada). All the other reagents used in this experiment were of analytical grade.

Preparation of standard and extract solutions for determination of amygdalin

0.5 g of different organs and tissues were transferred into a conical flask, and soaked with 20 ml ethanol for 2 h followed by ultrasonic extraction with TBT/C-YCL 500 Tt/3P (D) for 30 min using ultrasonic extraction machine (Sinobest electronic Co. Ltd., Jining, Shandong Province, P.R. China). The samples were extracted twice under the same condition, and filter fluid of both extractions were combined and evaporate till dryness at 35°C. The residue was dissolved in 1 ml HPLC grade methanol and transferred into a 1.5 ml Eppendorf tube. The crude extraction was filtered through a 0.30 μm micro-filter before HPLC analysis.

Determination of amygdalin and quantification

Determination of amygdalin was performed according to the method of Zhou et al. [32] using a HPLC system (Beckman, USA) equipped with 125 pump, 166 UV detector and an ODS C18 column (250 mm × 4.6 mm, 5 μm). The compound was detected at 210 nm at room temperature with an eluent flow rate of 1.0 ml/min. The mobile phase consisted of methanol (A) and 0.03 mol/L phosphate buffer (pH 2.8) (B) with a ratio of 25:75 (A:B, v/v). The quantification of the content of amygdalin in different plant materials were calculated using the standard curve.

Content of amygdalin in different organs and tissues of loquat 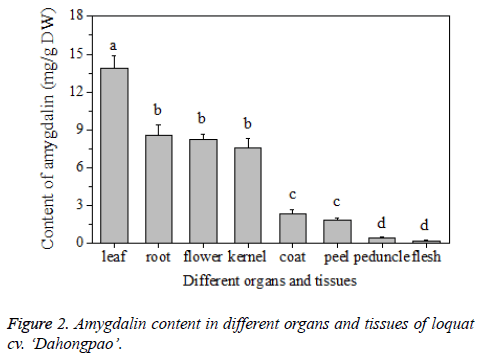 Content of amygdalin in the kernel during different developmental stages

The content of amygdalin in the kernel of the cultivars of ‘Dayeyangdun’ and ‘Ruantiaobaisha’ varied considerably during fruit development. Results showed that the content increased gradually in early stage, and reached the highest value in Stage 4, then decreased sharply, and maintained at steady level till fruit ripening (Figure 3). Zhao et al. [2] investigated the amygdalin content of four species of stone fruit trees during different stages, and found that the amygdalin level in kernels constantly increased and reached the highest value at last stage. Our results were inconsistent with above studies. Maybe amygdalin contents during fruit development differ in different fruit species. Amygdalin biosynthesis requires the participation of sugar, so the peak appearance of amygdalin may be related to sugar biosynthesis, while the decreased of amygdalin in the kernel maybe resulted from accumulation of soluble sugar in the fruit, especially in the flesh tissue. 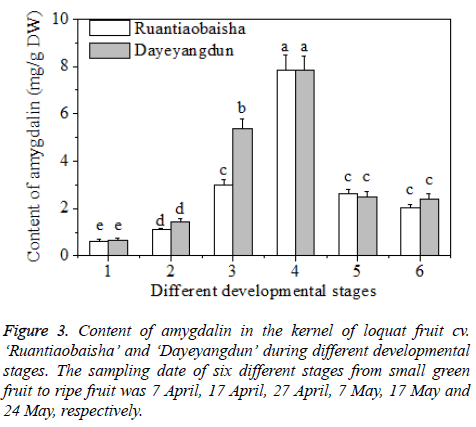 Figure 3: Content of amygdalin in the kernel of loquat fruit cv. ‘Ruantiaobaisha’ and ‘Dayeyangdun’ during different developmental stages. The sampling date of six different stages from small green fruit to ripe fruit was 7 April, 17 April, 27 April, 7 May, 17 May and 24 May, respectively.

Content of amygdalin in the kernels of different cultivars 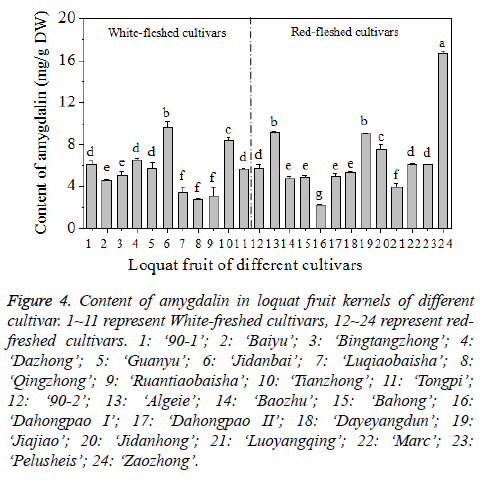 In loquat fruit, amygdalin was enriched in the kernel. The amygdalin level in fruit kernel was similar to that in the flowers or roots, and was significantly lower than that in the leaves, while the flesh contained trace amount of amygdalin. Furthermore, the amygdalin content in the kernel varied considerably during different developmental stages and in different cultivars of loquat. The results can provide a theoretical basis for the comprehensive utilization of loquat fruit processing waste in the future.

We are grateful to Yuhang Loquat Science Institute, Tangxi Xitaiyang Loquat Production Co. Ltd., and Taihu Technological Popularization Center of Evergreen Fruit of Jiangsu Province for kindly providing the plant materials used in this research. Thanks Dr Muna A.M. El Hadi of Gezira University in Sudan for helping us to improve this manuscript. This research was financially supported by the National Natural Science Foundation of China (Grant no. 31171934), the Priority Academic Program Development from Jiangsu Government and Excellent Youth Backbone Teachers of Yangzhou University (2014).