Detection of HBV integration in plasma and paired tumor samples

HBV infection is a leading cause for chronic hepatitis, cirrhosis, and Hepatocellular Carcinoma (HCC) [1,2]. HBV carriers have high susceptibilities for cirrhosis and HCC [3]. HBV infection is an epidemic in Asia, Africa, Southern Europe and Latin America, and consists of at least eight genotypes (AH) [4]. In particular, HBV/A and HBV/D have a worldwide distribution, HBV/B and HBV/C are more restricted to east/ south-east Asia, HBV/E in west/central Africa, and HBV/F and HBV/H in indigenous populations of the Americas [5].

Massive Parallel Sequencing (MPS) technology has provided unprecedented means to study HBV integration globally. Despite several studies carried out by other groups, in which the authors investigated the effects of HBV integration [6], the genes preferentially integrated by HBV [7], and the viralhuman chimeric transcript which may predispose risks to the development and progression of liver cancer [8]. However, we noted that, the cancer tissues samples analysed in these studies were collected via invasive procedures. In order to facilitate the clinical utilization of HBV integration, we decided to investigate HBV integration in the DNA samples from the plasma and paired tumor samples.

We collected the HCC tumor and paired plasma samples from 2 HCC patients, and applied a High throughput Virus Integration Detection (HIVID) method to detect HBV integration sites [9]. In total, we detected 24 integration sites, and one of these sites was detected in both the tumor and the paired plasma samples. Furthermore, we discovered several novel genes which were integrated by HBV. Altogether, our results provided evidence for the HBV integration in the plasma DNA, which might be useful for HCC prognosis and diagnosis.

We obtained the plasma and tumor tissue samples of two HCC patients (001, 002) from the No.2 People’s Hospital, Chengdu, China, and both patients had been diagnosed with concurrent HBV infections (Table 1). Both patients had signed the written informed consent form, and the study had been approved by the Ethics Review Committee in the University of Sichuan.

The construction of sequencing library strictly followed the standard instructions provided by Illumina. Genomic DNA samples were sheared into 150-200 bp DNA fragments using Covaris E-210 (Covaris, Inc., Woburn, MA). The sheared fragments were purified, and their ends were blunted, “A” tailed, and then ligated to adaptors. The sequencing libraries were quantified using Bio analyser 2100 (Agilent Technologies, Santa Clara, CA). The hybridization procedures were carried out following MyGenostics’s GenCap™ Target Enrichment Protocol (GenCap™ Enrichment, MyGenostics, USA). The sequencing libraries were hybridized with HBV probes at 65°C for 24 hours, and subsequently subjected to washes to remove unbound. The eluted fragments were amplified by 18 PCR cycles in order to generate the sequencing library. Upon the successful completion, each library was further quantified and preceded to 101 cycles of paired-end index sequencing in the Illumina HiSeq 2000 sequencer according to the manufacturer’s official instruction (Figure S1).

Deploying an algorithm established by our team previously [9], the low-quality reads, duplication reads and also reads contain adaptor contaminations were removed. Subsequently, the filtered clean reads were mapped to both the human (NCBI build 37, HG19) and the HBV genomes. The chimeric reads (partially aligned to the human genome and partially aligned to the HBV genome were remained as the reads of our interest. The selected chimeric reads were then subjected to paired-end reads assembly, which helps to reconstruct fragment sequences, and additionally increase the efficacy to locate the precise position of the breakpoints. The PE-assembled reads were re-mapped to the human and the HBV genome using BWA (Figures S2 and S3) [10]. The HBV integration breakpoints were annotated using ANNOVAR [11].

The HBV genotype and coverage of HBV genome 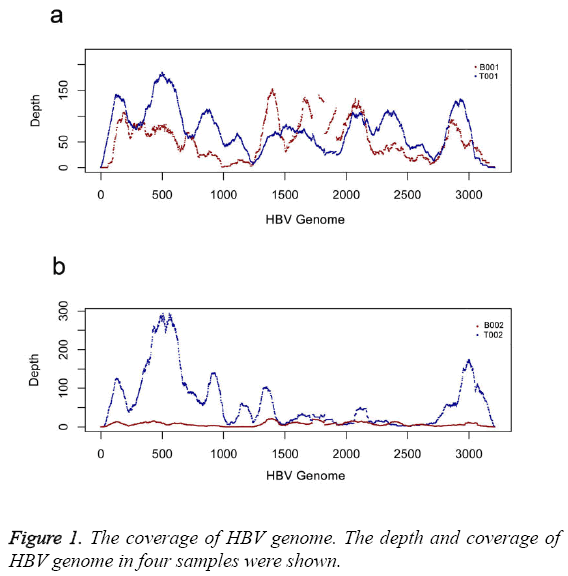 Detection of HBV integration sites in tumor and paired plasma

Two sets of samples had been carried on detection of HBV integration by HIVID [9]. The results showed that there were 24 integration sites detected in both tumor and plasma samples. Among 24 breakpoints, 12 breakpoints were located in the genetic region and 12 breakpoints were located in the intergenic region. Breakpoint (chr18:11550976) could be detected in both T001 (tumor) and B001 (paired plasma) (Table 3). While there were no consistent integration sites between T002 and B002.

Table 3: The position of breakpoints.

The distribution of HBV breakpoints in HBV genome 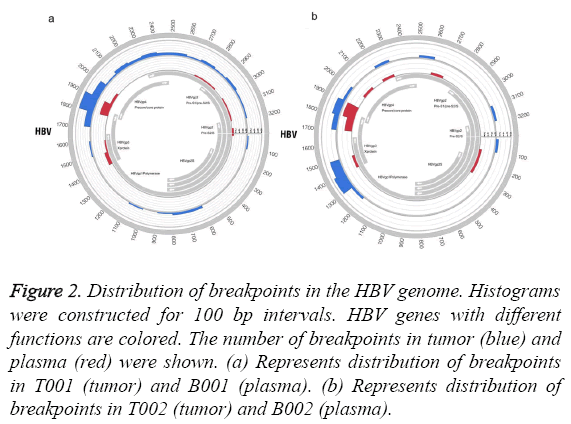 HBV integration had been shown linking to the tumorigenesis of HCC. The studies led by Sung et al. had identified several genes preferentially integrated by HBV [7]. In this study, we analysed the breakpoints of HBV integration in two sets of the paired plasma and the HCC tumor samples. In the first sample set, the same breakpoint could be detected in the HCC tumor (T001) tissue and the paired plasma (B001) samples. However, there were no identical integration sites found in the other set of samples. The use of plasma DNA sample is crucial for clinical diagnosis due to a certain percentage of circulating DNA originated from the degenerating tumor cells [12]. According to previous study, apoptosis might be one of the major sources of plasma or serum DNA [13], despite the entire mechanism of DNA being released into circulating blood still remain to be thoroughly investigated. Accordingly, plasma DNA had been proposed for early diagnosis [14]. The reason why there was no consistent integration site in the second set of the HCC tumor and the paired plasma samples is unclear. Curiously, we noted that the two patients recruited in this study had different clinical background (Table 1), which might indicate clinical factors had some effect on HBV integration in these samples. Owing to a limited number of patients, further studies probably are required to clarify this matter.

Furthermore, our findings also included several novel HBVintegrated genes. Among these genes, STK36, PPME1 were in particularly interesting, because of their associations with cancers. STK36 encodes a serine/threonine kinase, which is an established therapeutic target for cancer treatments [15]. PPME1 produces a protein phosphatase methyl esterase that has roles in malignant glioma progression [16].

Moreover, twelve breakpoints had been located to the intergenic regions. Nevertheless, the importance and significance of these integration sites remained elusive. Worthwhile to point out though, an increasing trend of research interests had drawn to resolve the usefulness of intergenic integration sites. For instances, MYC activation was driven by an upstream integration of HPV-18 genome [17]; β-catenin transactivity could be modulated by HBV integration in Long Interspersed Nuclear Element (LINE) [8].

The distribution of breakpoints in the HBV genome was also investigated. The breakpoints were particularly enriched in the coding regions of HBV X and core genes; this is consistent with the previous findings by others and also our group. The different depth pattern between the tumor and the plasma samples might be due to that the HBV DNA in the tumor and plasma samples might have different source.

Our study had provided evidence for HBV integration in plasma DNA, which might be potentially useful for future HCC prognosis and diagnosis.

The authors declare no competing interests.