The incendiary changes in the retina will lead to curative approaches that prevent blindness. Diabetic retinopathy is the most prevalent diabetic eye disease that produces intensive damage to the retina by creating progressive changes in its blood vessels. This can eventually lead to blindness. Diagnosis of this disease in its earlier phase is very important and this can be accomplished by a comprehensive eye examination and regular screenings. During the screening process, the images of the retina are taken by making use of an ophthalmoscope or a fundus camera. In this work, an attempt has been made to differentiate between an retinopathic eye from an healthy eye by applying total variation to the fundus photographs. Total variation measures the signal variation between successive signal values. Understanding

Human eye is a fundamental sense organ that enables vision. It is considered a natural camera. The retina is an indispensable part of the human eye that consists of rod and cone cells. Diabetic patients are highly vulnerable to deteriorating diseases such as diabetic retinopathy. It is a complicated disease that generally prevails in patients with chronic diabetes. Diabetic retinopathy at its worst causes complete blindness. There are a few screening methods that can detect early diabetic retinopathy. If detected early, the progression of diabetic retinopathy can be curbed by keeping blood sugar levels under control. Ophthalmoscopy is one of the screening methods that can be used to detect the disease at an early stage. But ophthalmoscopy requires the expertise of skilled professionals. An alternate strategy is to perform fundus photography.

Diabetic retinopathy [4,5] is a chronic disease causing massive damage to the retina, resulting in an alarming damage to human sight due to the destruction of blood vessels. This condition commonly affects both the eyes. There are two categories of diabetic retinopathy.

The non-proliferative kind is the initial stage of diabetic retinopathy that causes leakage of blood and leads to swelling in retina. The blood vessels in the eye swell and result in leakage of lipids and blood that are called hard exudates. These deposits cause swelling along fovea centralis and flattening of the macula, a condition called macular edema resulting in loss of clear central vision. This can be treated using laser surgery [10]. The blood leaked into the vitreous humour often leads to occlusion and could be corrected by vitrectomy.

As NPDR results in insufficient blood supply to eyes, the system responds to it by developing new blood vessels, a process called neovascularization. These newly developed blood vessels are often weak and are prone to leak. This is called PDR or proliferative Diabetic Retinopathy.

An effective screening method must fulfil certain criteria. The sensitivity and the specificity must be high. In other words, the number of true positives detected must be high, while the specificity or the number of true negatives eliminated must be high as well. Even though there are several screening methods to detect diabetic retinopathy, debate prevails on how this screening is done. Ophthalmoscopy allows skilled professionals to look into the inner structure of the eye through an ophthalmoscope. Fundus photography is an alternative for this method. [8] It creates images of inner structure of an eye that are later examined by trained professionals.

The focus of our work was to automate the detection of diabetic retinopathy, thereby eliminating errors culminated by human measurement. Fundus images obtained from HRF database [2] have been used for this study. This database is a public repository containing high-resolution fundus images of retinas of healthy and retinopathic eyes, and thus serves as a benchmark for algorithms aiming at automation. The screening was carried over 100 diabetic subjects of 25-90 years of age and thirty photographs after the screening have been randomly selected and made available as a public repository. This dataset consists of 15 images of healthy eyes and 15 images of retinopathic eyes. The pictures taken by an expert using a Canon CF-UvI fundus camera have a resolution 3504 x 2336.

Total variation is been applied on the images of both healthy and retinopathic eyes. Total Variation [1,3] is a common method used in digital image processing. According to this method, signals that contain spurious information have high amounts of total variation. Two adjacent pixel values are compared and the variation in them is calculated. Colour images are converted to grayscale images before taking them as input since grayscale images make the comparison much easier. 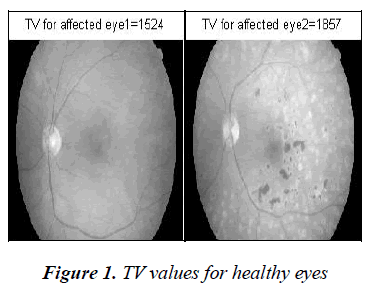 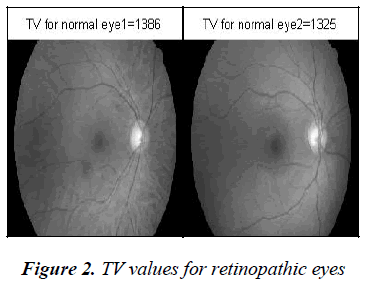 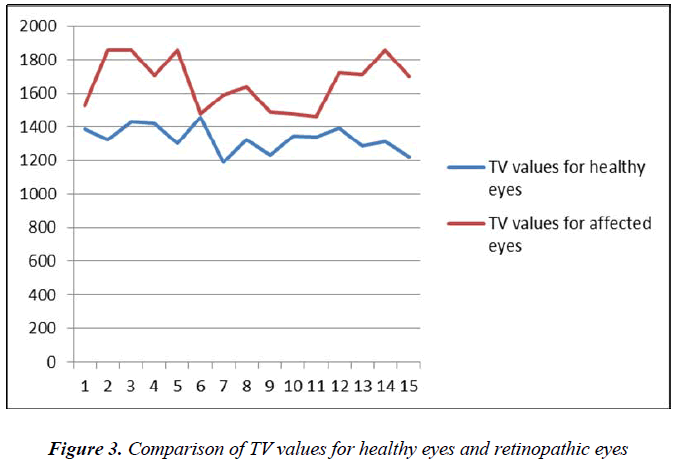 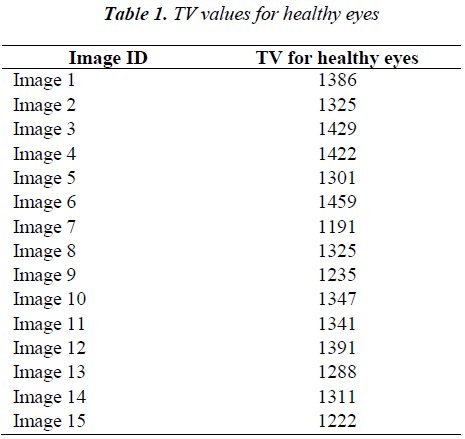 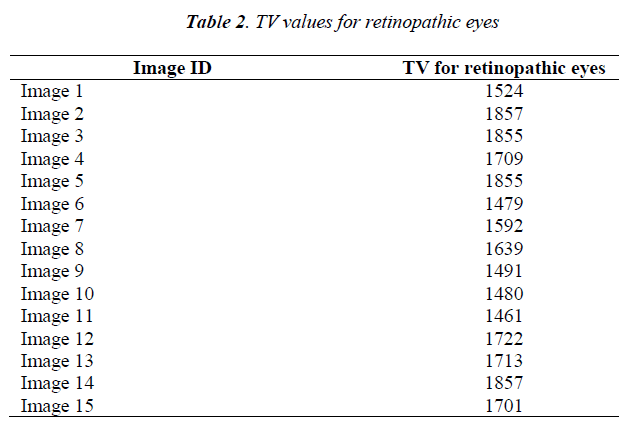