Dermatofibrosarcoma Protuberance: A Case Report and Review of Literature

Dermatofibrosarcoma protuberance (DFSP) is a relatively uncommon soft tissue tumor with intermediate-to-low grade malignancy. There is paucity of magnetic resonance imaging (MRI) and computed tomography (CT) scan literature on the appearance of DSFP .We de-scribe the imaging findings of another rare case of DFSP in a 35 year diabetic male with progressive left arm painless swelling over seven months. CT scan and MRI were per-formed and reveal a mass lesion originating from the skin and embedded in the subcutane-ous mass. Excisional biopsy was done and the histopathology confirmed the diagnosis DFSP.

Dermatofibrosarcoma protuberance (DFSP) is a relatively uncommon soft tissue neoplasm with intermediate-to-low grade malignancy [1]. Although metastasis rarely occurs, DFSP is a locally aggressive tumor with a high recurrence rate [2]. Although DFSP may have been reported in the literature as early as 1890, Darier and Ferrand first described it in 1924 as a distinct cutaneous disease entity called progressive and recurring dermatofibroma [3]. Patients often ignore these tumors because of their slow growth which left untreated for several months [4]. Radiological imaging is not routinely performed as part of the workup of patients with these neoplasm’s because of their typical clinical appearance and superficial location. When imaging is used, it is often to evaluate larger or atypical primary lesions or recurrent disease as well as to evaluate the extension of the lesion and to rule out distant metastasis[4]. we describe the imaging findings of another case of this rare tumor and review the scant magnetic resonance (MRI) and CT literature on the radiological appearance of DSFP .

We present a case of a 35- year old diabetic male presented to the surgical clinic with a progressive left arm painless mass over a period of seven months. There was no history of trauma, fever or weight loss. Physical examination revealed a 6x6 cm well defined mass lesion at the lateral mid aspect of the left arm. The mass has smooth surface, mobile, attached to the skin and not tender. The laboratory investigations were unremarkable. The patient was admitted for further evaluation. CT scan and MRII were requested to accurately localize the lesion, to evaluate the extension of the lesion and to rule out distant metastasis. CT scan (Figure 1) revealed a well circumscribed, oval shaped, soft tissue attenuation mass, epicentered in subcutaneous fat of the lateral mid aspect of the left arm. The overlying skin was stretched over the mass and was not separately identifiable from the mass. The lesion caused a prominent bulge of the left arm. The lesion was superficial and isodense to the deltoid muscle and the thin intervening fat plane was grossly preserved. . The underlying muscle and humerous were normal. CT scan of the chest shows no evidence of metastasis

MRI of the upper arm (Figure 2) was performed with the following sequences (T1-weighted, T2-weighted), Short tau inversion recovery and post IV gadolinium Contrast enhanced T1WI. The tumor showed uniform signal, similar to that of adjacent muscle in T1WI and of uniform intermediate high signal in T2WI, higher than the adjacent muscle but lower than the signal of the surrounding subcutaneous fat. Post IV gadolinium T1WI showed a uniform avid enhancement of the lesion. The relationships of the lesion to adjacent structures were respected. Incisional biopsy was performed and the histopathology revealed very cellular neoplastic tissue composed of relatively monomorphic spindle cells with focal storiform pattern.there are few mitosis.CD34 moderately positive,vimetin weak positive, S100, actin, and desmin negative. So, the diagnosis of dermatofibrosarcoma protuberance was confirmed. The patient underwent surgery with wide local excision and 3 cm safety margin. Histopathology confirmed that all the surgical margins are free. After short recover period the patient was discharged and referred to a specialized oncology center for further management. 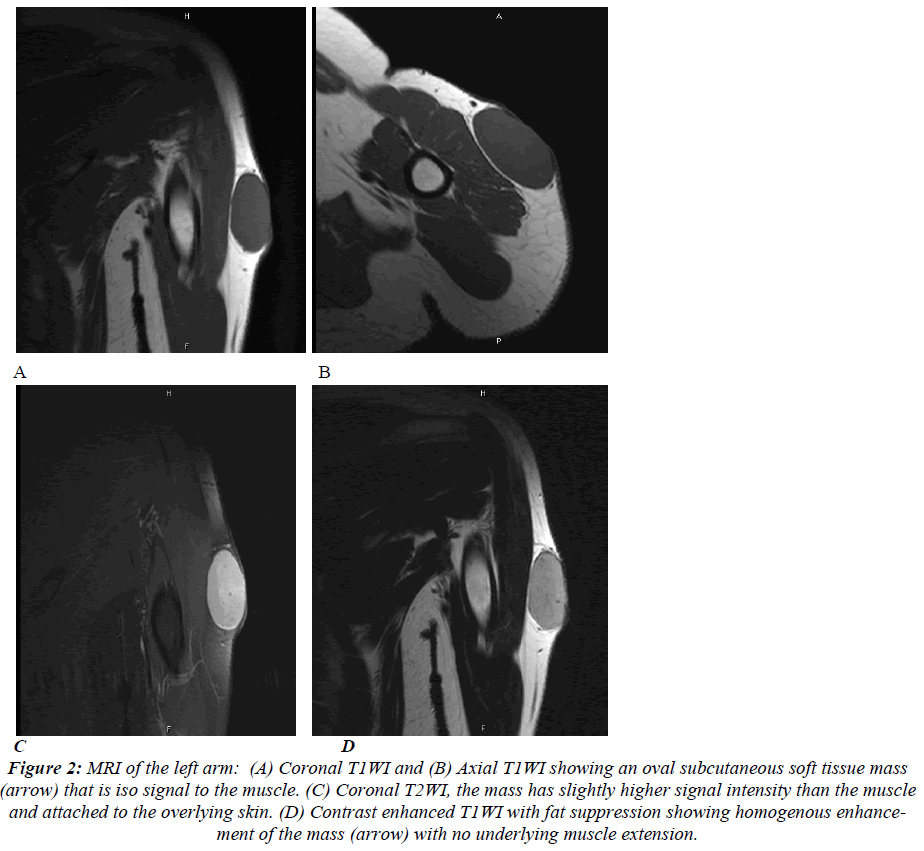 Figure 2: MRI of the left arm: (A) Coronal T1WI and (B) Axial T1WI showing an oval subcutaneous soft tissue mass (arrow) that is iso signal to the muscle. (C) Coronal T2WI, the mass has slightly higher signal intensity than the muscle and attached to the overlying skin. (D) Contrast enhanced T1WI with fat suppression showing homogenous enhance-ment of the mass (arrow) with no underlying muscle extension.

Dermatofibrosarcoma protuberance accounts for about 6% of all soft-tissue sarcomas [5]. This disease is more common in men than in women and has a peak incidence during third decade [6]. It may occur at sites of previous trauma. Lesions ranging from 1 cm to more than 25 cm have been described in the literature [7]. The trunk is the most common site of involvement for dermatofibrosarcoma protuberance, accounting for almost half of all cases The extremities followed by the head and neck are the next most common sites, but tumors may occur on any part of the body [4]. The tumor first appears as a single, red to bluish, blanchable, firm, coetaneous nodule. During the late stage, rate of growth accelerates, producing the characteristic protrusion from the skin [6]. The growth rate is variable. Lesions may remain stable for many years or they may grow slowly with periods of accelerated growth [6]. Local recurrences occur in 20-55% of cases [6]. Reviewing the Literature and to our knowledge this is the first case described radiologically in our country.the imaging features of our case meet those of the scanty previously described in literature. While the imaging features are not pathognomonic of the tumor, the characteristic location and shape should prompt inclusion in the differential diagnostic list.

The radiologic appearance of dermatofibrosarcoma protuberance is typically that of an unmineralized, nodular softtissue mass involving the skin and subcutaneous adipose tissue [5]. CT scans or MRI images are well suited to show this location, the relation of the lesion to underlying structures, and the distinct lobular or nodular architecture [5]. On CT scanning DFSP may be confused with a dermatofibroma, a neurogenic tumour, a fibrosarcoma or a malignant fibrous histiocytoma (MFH) as the CT findings of these tumors resemble those of DFSP, DFSP displays an almost pathognomonic protrusion from the skin, a feature which distinguished DFSP from other tumors [6]. Although MRI imaging findings are nonspecific and may include heterogeneous foci of hemorrhage, myxoid change, or necrosis [7]. The series by Kransdorf and Meis-Kindblom uses MRI imaging to identify dermatofibrosarcoma protuberance tumors [5]. In their 1994 se-ries, Kransdorf and Meis-Kindblom described four patients, of a total of 11 patients scanned in their series, who underwent MRI imaging. The tumors in all four cases described in their series were well defined lesions on MR imaging with low signal on T1-weighted images and signal higher than fat on T2-weighted sequences. The tumor in one case had areas of high signal on T1-weighted sequences compatible with that of hemorrhage .MRI is invaluable in the evaluation of softtissue tumors , allowing accurate localization before surgery. Galant et al. reported on the use of MR imaging in the evaluation of the location of subcutaneous soft-tissue masses relative to the superficial fascia [8]. They found that if a subcutaneous lesion crossed the superficial fascia, malignancy was 6.88 times greater than that for lesions that did not cross the fascia. Several of the tumors in Torreggiani et al series were atypical [4]. Knowledge of the variable range of MR imaging features of dermatofibrosarcoma protuberance is, therefore, important.

In conclusion, dermatofibrosarcoma protuberance is a rare, usually superficial soft-tissue sarcoma, which is often diagnosed by its typical clinical manifestations. We have described the imaging findings of one case of histologically proven dermatofibrosarcoma protuberance. MR and CT imaging allows accurate preoperative assessment and aids in the diagnosis of atypical or difficult cases.

The author would like to acknowledge Prof. Ahmed A.R. Mahfouz of the Department of Family and Community Medicine, College of Medicine, King Khalid University, Abha for his help in reviewing the manuscript.