Several diseases threaten human health by affecting longevity and its well-being in many ways. Among them, chest diseases as Tuberculosis (TB), Chronic Obstructive Pulmonary Disease (COPD), pneumonia, asthma, and lung cancer are considered as serious health complications and one major cause of death in both developing and developed countries. Doctors confirm that the earlier a disease is diagnosed, the higher is the patient cure probability. In this context, expert systems and different artificial intelligence techniques have been successfully used to solve different problems in various domains including medical diagnosis. In this paper, we use the Support Vector Machines (SVM) method to diagnose chest diseases and for the first time, we examine the performance of the Adaptive Support Vector Machine (ASVM) method for chest disease diagnosis. This involves improving the SVM by finding its most appropriate Bias term value. These approaches are evaluated using an experimental dataset from Diyarbakir chest diseases hospital and comparing them with the Neural Network method used in previous studies. The experimental results showed the efficiency of these methods, especially ASVM, which could achieve promising results and confirmed that it, can be efficiently used in chest diseases.

Making decisions is usually very difficult and sometimes impossible for some complicated systems: accordingly, researchers are increasingly interested in the use of decision support systems especially in crucial domain including business, engineering, and medicine etc.

The chest is the human body region located between the neck and the abdomen that contains the essential organs including the heart and the lungs. It has crucial roles; in particular, it ensures the proper functioning of the lungs and the protection of vital organs as the heart, the lungs (en.wikipedia.org/wiki/ Thorax). The chest is vulnerable to certain dangerous diseases, including TB, COPD, pneumonia, asthma and lung cancer, etc. [1].

In fact, TB is a dangerous, infectious, contagious and deadly disease that affects the lungs. The World Health Organization (WHO) reported that in 2015, 1.8 million of person died from the TB (www.who.int/mediacentre/factsheets/fs104/en/). This disease mainly affects people who suffer from malnutrition and children with an immunology nuisance, for which, the body immunity is weak. [2-4]. This disease can be identified by certain symptoms such as a cough with sputum and blood, chest pains, weakness, weight loss, fever and night sweats [5,6], (www.who.int/mediacentre/factsheets/fs104/en/).

In addition to TB, COPD is among the dangerous chronic diseases causing an increase in the mortality rates in the recent years [7] and it is estimated that by 2030, the COPD will be the third leading cause of death (www.who.int/mediacentre/factsheets/fs315/en/). This illness is deadly and manifested by a shortness of breath and a severe cough. According to the medical research, smoking, respiratory infections, and air pollution are among the major causes of this disease [7].

In addition to the COPD, pneumonia is among the most dangerous epidemics that affect the chest, since both virus and bacteria [8] can cause it. Pneumonia affects people of all ages in particular children from 2 months to 7 y. In 2015, according to the WHO [9], pneumonia killed about 922,000 children.

This disease can be diagnosed by several symptoms such as coughing, difficulty in breathing, fatigue, low blood pressure, chest pain and temperature that can reach 41°C. Asthma is also considered among the most common noncommunicable lung diseases, which can affect people independently of age. According to the WHO, about 300 million people suffer from asthma worldwide (www.who.int/mediacentre/factsheets/fs307/en/).

This disease is characterized by shortness of breath, chest pain, sleep disorders, cough and wheezing. Some of the causes of this disease are air pollution and tobacco.

Some researchers consider cancer to be the most dangerous disease. It is a rapid and uncontrolled growth of cells that can damage vital organs of the human body as the brain, the liver, the bone (www.who.int/mediacentre/factsheets/fs297/en/).

According to the WHO statistics, Lung cancer is among the most common causes of cancer death that caused 1.59 million cases of death in 2012. (library.iaslc.org/search-speaker? search_speaker=31613). It affects the lungs and usually appears in smokers. Its symptoms appear especially in advanced stages of illness and include cough, coughing up blood, shortness of breath, chest pain, wheezing and losing weight.

Hence, the majority of the diseases previously detailed have explicit symptoms, which help doctors in diagnosing these illnesses. Experts and doctors affirm that the early detection of chest diseases profoundly affects the treatment, can save several lives and increases the patient cure probability.

Moreover, other research focuses on the use of the Artificial Immune System (AIS) method for chest disease diagnosis [10]. The results obtained using this method are interesting since it achieved an efficiency of 90% for TB, 92.96% for COPD, 93.33% for pneumonia, 90.91% for asthma and 93.75% for lung cancer [10].

In addition, SVM provided good results in diagnosing the breast disease [12]. Indeed, using WISCONSIN breast cancer dataset and compared to two others machine learning classifiers, which are Naive Bayes and RBF, SVM show that it achieves the best performance since it provides the highest diagnosis accuracy with 93.75%, followed by the NB with 71.67% and 70.01% for RBF [12]. SVM gave also good results in diagnosing the Tuberculosis. This was the case in [13] in which the results obtained showed the ability of this method in predicting about 84% of infected people.

Hence, as it has been previously detailed, SVM presents the best results in problems related to chest diseases diagnosis. Based on this, in this paper, we use the SVM to diagnose chest disease. We compare the performance of SVM with previous studies. Then, we employ the ASVM in order to improve the success percentage of SVM.

In this section, a comparative study between the SVM and the ASVM is performed to diagnose chest diseases.

SVM is one machine learning technique for solving discrimination and regression problems, which was first introduced by Cortes and Vapnik in 1990 for binary data classification [14-19]. Today, it is used in several research areas such as face recognition [20], speaker recognition [21], medical diagnosis [22], etc.

In fact, as shown in Figure 1, SVM consists in constructing the maximum margin hyperplane that optimally separates two classes of a datasets D=where and the class label of . However, many hyperplanes can separate the two classes. Thus, SVM uses a training phase to find the optimal hyperplane called Optimal Separating Hyperplane (OSH) which fulfils, where w is an m-dimensional vector and b is a “Bias” term that separates two classes and maximizes the margin between two classes [21]. 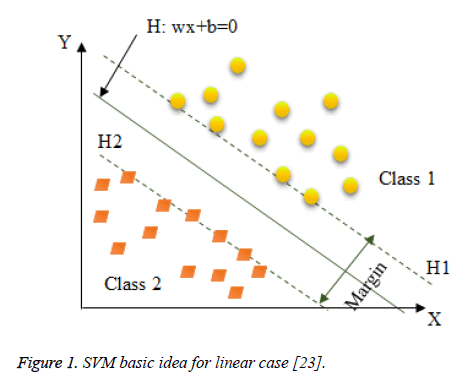 The above problem is solved by using the method of Lagrangian multipliers expressed in Equation 3 as follows.

Where αi are the multiplier of Lagrange. The optimum of objective function Q is obtained by minimizing it with respect to w and b and by maximizing Q with respect to αi using Equation 4.

Hence, substituting Equations 4 and 5 in Equation 3, the following dual problem to maximize is obtained.

Where the examples x having Lagrange coefficients are αi ≠ 0 called support vectors.

The problem of classifying a new data x is solved then by the following decision function given by Equation 7.

Thus, the class decision can be made as follows:

Since the data is not linearly separable as the case in Figure 2, the idea is to map the non-linear space in a new linear higherdimensional space, where the training set is linearly separable by a kernel function expressed as follows in Equation 8. 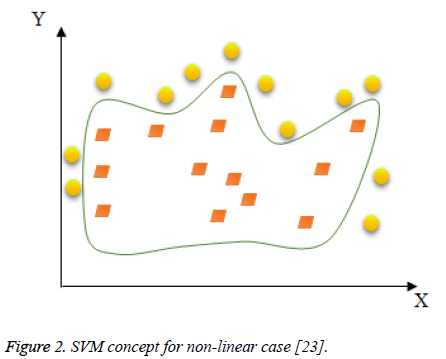 Indeed, this transformation space is performed using a “mapping function” F=(ф (x)|x ε X}which is implicitly defined by the choice of SVM kernel. The new space is called "Features space"(Figure 3) [23].

Many kernel functions have been used when applying SVM. Among the most popular functions, we shall mention linear, polynomial, RBF, sigmoid kernels [23]. 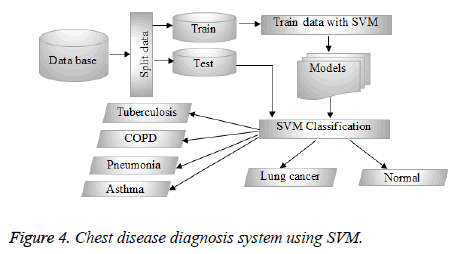 As it has previously been explained in the previous section, SVM includes a rectified term called “Bias” b through the optimal hyperplane equation f (x)=wTx+b. In order to acquire the highest success rate in diagnosing diseases, the ASVM is studied here. In fact, the ASVM idea consists of applying an algorithm which finds the most appropriate Bias value ‘b’ of SVM [24]. Using the minimum and maximum values of Bias bmin and bmax, the minimum and maximum number of fragmentations Smin and Smax of Bias space given by the researcher, the algorithm idea consists in splitting the Bias space values into equal fragments, testing the different Bias values from each fragment and keeping the most appropriate fragments that give the highest success rate in diagnosing diseases. The ASVM algorithm [24] consists of:

Test the system with the different Smin-2 Bias values.

If R1 and R2 are given by bmin or bmax then

Assign the Bias with the highest classification rate as the ideal Bias value.

Hence, the ASVM main idea is to find the ideal Bias value that will be used to carry out the classification process after the training phase. The ASVM structure used in our study is shown in Figure 5. 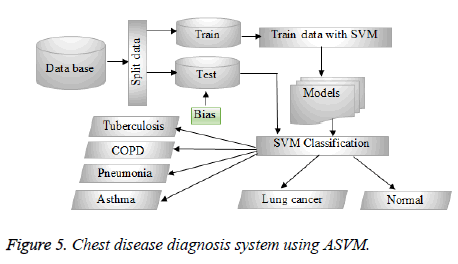 Description of the case study

In this paper, as a system performance evaluating method, we used the classification accuracy which is obtained by dividing the correct classified instances by the total number of instances [1]. Hence, our tests have been performed by “MATLAB R2008a”, using a set of data taken from Diyarbakir Chest Diseases Hospital (Southeast Turkey) [1]. In fact, the data set contains six classes and 357 samples distributed as follows:

After testing the performance of SVM and the ASVM on chest disease diagnosis and comparing it to the previous studies, we obtain the results presented in Table 2 below. In fact, after analyzing the obtained results we can deduce that: It can be clearly seen that there is a difference between our results and those given by previous studies [1]; The previous classification results presented in [1] gave 90% of accuracy for TB, and 88.73% accuracy for COPD by using MLNN method with LM (2 hidden layers). Moreover, in [1], MLNN method gave 90% accuracy for Pneumonia. For Asthma, 90.91% was achieved by using PNN method. In addition, LVQ achieved 93.75% for Lung cancer. Finally, 96% of normal instances were predicted by using MLNN. So, we can conclude that the authors in [1] gave reasonable results and acceptable solution for chest diseases diagnosis but as can be seen, not most efficient.

Table 2. Classification accuracies for each disease.

From Table 2, it can be clearly seen that our method using SVM gave better classification results compared to the previous studies presented in [1]. For example, SVM reported an efficiency of 91.87% for TB, 90.59% for COPD, 97.23% for Asthma and 96.70% for Lung cancer. So, by using SVM, the classification rates of the five chest diseases studied were generally higher than those presented by the previous methods in [1]. So we can say that SVM performs better than the previous studies that have used different types of Neural Network.

These results show that using ASVM to diagnose chest disease is a good tool compared to other methods. The ASVM success is related to the change of the standard value of Bias used in SVM by an adaptive value. Hence, this allows us to conclude that the classification accuracy obtained by using ASVM is higher than the one obtained by using standard SVM and is significantly better than the accuracy obtained by the previous methods (MLNN, PNN, LVQ, GRNN, and RBF). These results prove the effectiveness of using the ASVM for chest disease diagnosis thanks to the additivity concept of the Bias value that allow the classification accuracy to be increased.

Amani Yahyaoui is funded by a grant from Türkiye Burslari Scholarship, Turkey.