Rare element Tellurium (Te) is known as a nonessential toxic element and its biological function has not been described comprehensively yet. Wide spectrum areas show interest in nanoparticles because of their unusual biological features and use in different commercial products. In this research, tellurium dioxide nanoparticle (TeO2 NP) which is an important material for industrial areas including biomedical applications was analysed on cultured Human Pulmonary Alveolar Epithelial (HPAEpiC) and peripheral blood cells. For this purpose, TeO2 NPs size and content were confirmed and characterized via using X-ray crystallography (XRD) and Scanning Electron Microscope (SEM) techniques. Cell viability was determined by 3-(4, 5-dimethyl-thiazol-2-yl) 2, 5-diphenyltetrazolium bromide (MTT) and Lactate Dehydrogenase (LDH) release assays. Also, TeO2 NPs were investigated on the cell cultures in the aspect of Total Antioxidant Capacity (TAC) and Total Oxidative Stress (TOS) levels. The TAC values did not change but, The TOS values significantly increased for the cell cultures after TeO2 NPs application. According to cell viability assays, 160 mg/l concentration of TeO2 NPs was found to be highly toxic for both cell cultures. In the light of these findings, it could be inferenced that TeO2 NPs is immensely cytotoxic for different cell types and toxicity process might occur through oxidative stress mechanism.

Tellurium (Te) is used in different industrial and commercial products as a sensor, biomedical device, and laser production. Recently, wrist-wear pulse active sensors are produced by using Tellurium dioxide (TeO2) micro-wires. These sensors detect human pulses precisely and may be used as touchless control panels [1]. Moreover, TeO2 is used in the production of glasses which have high refractive index, low melting temperature and high transparency properties [2-4]. These glasses with these features are also good candidates for laser system production [5].

Te compounds are highly diverse and reactive in different forms but biological organisms generally do not use Te diversity as a major advantage. Besides there are no many vital processes in living organisms using Te compounds [6,7].

According to previous studies, it is known that plants can accumulate Te up to 1 ppm concentration if the soil contains a high amount of Te [8]. Furthermore, fungi can metabolize Tecontaining amino acids such as telluromethionine, tellurocystine and tellurocysteine to from protein and grow when the sulphur source is unavailable [9]. Certain bacteria can use Te in form of tellurate and tellurite anions as electron acceptors to sustain anaerobic growth in Electron Transport Chain (ETC). When microorganisms use tellurate and tellurite as electron acceptors, they produce uniform Te (0) nanoparticles [10].

Te and Selenium (Se) have similar chemical and atomic structure, and these elements found in a same molecular group called chalcogen family [11]. Se is known as an important trace element for human with its antioxidant and anticancer features although Te is shown to have toxic effects and can disrupt different biological process [11-13]. On the other hand, recent studies showed that Te and sulphur molecules could be transcended to form enzyme inhibitors and redox modulators which might be used in antibiotics and anticancer drug production [6]. Different Te derivatives were found to have an excellent antioxidant activity for example; vinylic telluride has a protective effect against oxidant molecules induced toxicity such as manganese and acetaminophen [14,15]. Likewise, telluric hyaluronic acid which is strong antioxidant molecule can inhibit peroxidation, prevent contusion of mitochondria and maintain cytochrome coxidase activity [16].

In the present study, it was claimed to evaluate the toxicity of TeO2 NPs on HPAEpiC and blood cell cultures. Firstly, commercially obtained TeO2 NPs were confirmed in aspect of the molecular content and the size via using XRD method and SEM analysis respectively. MTT and LDH assays were used to investigate cell viability after Te application of various concentrations. Additionally, there are various contradictory reports about antioxidant properties of Te in the literature. Therefore, the TAC and the TOS levels were tested on both cell cultures to confirm whether TeO2 NPs alter oxidative status.

The micro-structural investigations of TeO2 NPs were made by X-Ray Diffraction (XRD) measurement at room temperature by using a Rigaku/Smart Lab diffractometer with CuKα radiation (λ=0.154059 nm) operated at 40 kV and 30 mA. The measurement was taken in the geometry of coupled θ-2θ varied between 100 and 850 with the step of 0.020. The surface morphology and particle size of TeO2 nanoparticles were investigated with a scanning electron microscope (FEI inspect S50 SEM).

For lymphocyte isolation, 7 voluntary male individuals aged between 20 and 25 years, who did not smoke or drink alcohol, and had no certain illnesses were included in the study. The peripheral blood samples taken into heparinized injector were used in the biochemical and cytotoxic researches. The sample was centrifuged at 20°C at 1000 rpm for 10 minutes by adding 12 ml blood cells and 12 ml PBS in the centrifuge tube. The mixture was slowly added on the Ficoll and centrifuged at 400 rpm at 20°C for 30 minutes to form different layers. The top layer was removed and remaining layers were taken to the empty falcon tube with 10 ml PBS. Later, 4 × 104 cells transferred to 48 well plates with penicillin/streptomycin, RPMI-1640 media (Sigma-Aldrich®), and TeO2 nanoparticles (0, 2.5, 5, 10, 20, 40, 80, 160, 320, 640, and 1280 mg/l). The culture was incubated for 72 h in a dark environment at 37°C with 5% CO2.

3-(4, 5-Dimethylthiazol-2-yl)-2, 5-diphenyltetrazolium bromide (MTT) solution was used according to the manufacturer’s instructions (Cayman Chemical Company®, Ann Arbor, MI, USA). Shortly, MTT was added to the cell cultures for 3 h and after incubation formazan crystals were dissolved in Dimethyl Sulfoxide (DMSO) (Sigma-Aldrich®), and the plates were analysed using a plate reader at 570 nm wavelength.

LDH cytotoxicity assay kit (Cayman) was used to carry out LDH assay according to the manufacturer’s protocol. The cells were seeded in 96-well plates and exposed to different concentrations of W2B for 72 h. After exposure, 96-well plate was centrifuged at 400 g for 5 min to get rid of W2B in the wells. Then, 100 μl supernatant was transferred to a fresh well of 96-well plate with 100 μl of the reaction mixture from Bio- Vision kit and incubated for 30 min at room temperature. Finally, the absorbance of the solution was measured at 490 nm using a microplate reader.

TeO2 NPs (Sigma-Aldrich®, USA) were obtained commercially and confirmed via using XRD and SEM in the aspect of morphology and size because, commercial products might show variations in contents. To analyse morphology of NPs, Rigaku SmartLAb X-Ray Diffraction (XRD) was used and results are shown in Figure 1. Structural analysis of TeO2 nanoparticles that it made with the X-Ray Diffraction (XRD) showed the highest peak at 2, 99,368 corresponding to Muller indices of 102. Some of the other reflections at 2θ=26,198 and 4,86,004 corresponding to Muller indices of 110 and 201 detected in the XRD pattern and this results correlate with the literature (Figure 1). 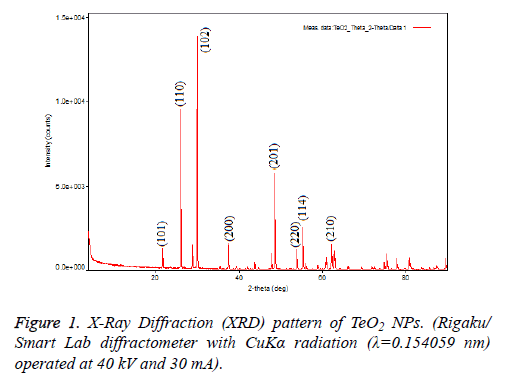 MTT and LDH tests on HPAEpiC and lymphocyte cell cultures 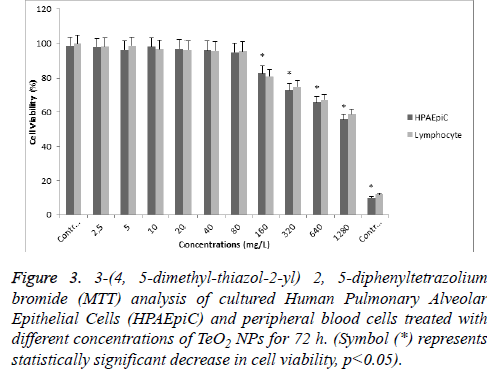 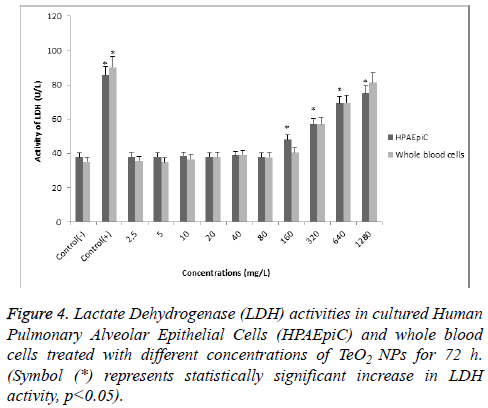 Recent development on nanoparticle usage in every aspect of life makes it indispensable to analyse possible toxic effects of NPs [17]. Tellure and derivatives are commonly used in various industrial areas, as a result of producers, consumers and environment expose TeO2 constantly [18,19]. NPs are primarily received via inhalation and accumulated in lungs. Then, NPs are carried from lungs to blood and results in toxicity arise for other organs [20]. Since nanoparticle exposure affects mainly lung and blood, in this research the HPAEpiC and blood cell culture models were used to investigate TeO2 NPs toxicity.

MTT and LDH analysis were used to evaluate the cytotoxicity of TeO2 NPs on the HPAEpiC and blood cell cultures. As stated in both cell viability tests, 160 mg/l concentration of TeO2 NPs was highly cytotoxic for the HPAEpiC and blood cell cultures. These results correlated with limited data in the literature. Recent analysis on HeLa cells showed that higher concentrations of tellure NPs caused ROS production and result in a decrease of the cell viability [21]. Also, tellure nanowires were investigated to increase ROS production and cell death in mouse embryonic fibroblast cell culture after 48 h exposure [22,23]. Although, there was no any information about TeO2 NPs and different cell culture interaction in the literature, different parameters (TAC, TOS and ROS) could shed light on this issue because of the NPs and ROS relationship. Moreover, in this work it was found that TAC values for lung and blood cell cultures did not change after TeO2 NPs application but, TOS values increased significantly when TeO2 NPs concentration reached to 160 mg/l. In a parallel manner, tellurium-based agents were shown to disturb Oxidative Stress (OS) and intracellular redox balance in different cancer cell cultures. These agents affected the oxidizing redox environment present in the cancer cells to fatal reactive species that triggered cells to pass a critical redox threshold and initiated apoptosis mechanisms [24]. Investigators used Tellurium Tetrachloride (TeCl4) as toxic agent on rat astrocytes. Light and scanning microscopy analysis correlated with our results that higher concentrations resulted in higher toxicity. Furthermore, cytochrome c and TUNEL assays demonstrated that TeCl4 application induced apoptosis in rat astrocytes [25].

In conclusion, our study investigated cytotoxicity, pro-oxidant and antioxidant potential of TeO2 NPs by using MTT, LDH, TAC and TOS analysis. In the light of findings, it could be concluded that TeO2 NPs did not have antioxidant activity; on the contrary higher concentration of NPs could cause a cytotoxic and pro-oxidant effect on both the HPAEpiC and blood cell cultures. As a result, the potential health and safety risks due to the use of TeO2 NPs in a variety of applications including medicine and pharmacology should not be ignored because of the potential dose-dependent nano-toxicity of the NPs.