3The second Department of Anaethesiology, No. 1 Hospital of Shijiazhuang, China

Introduction: Surgery could directly cause an inflammatory response and stimulate the release of cytokines, such as interleukin (IL)-8, tumor necrosis factor-α (TNF-α) and IL-10. Infection and postoperative complications are higher risk factors after craniotomy, and the impairment of immune function is associated with post infection and complications. The aim of our study was to investigate the changings of cytokines and immunoglobulins levels in patients received craniotomy surgery.

The systemic inflammatory and immune parameters were adopted in many researches to quantify the degree of surgery and anesthesia-related trauma. Previous study revealed that immune cell decreased significantly after general anesthesia induction [5].

patients receiving craniotomy surgery were included in our study. All the operations and medical examinations were conducted in Beijing Tiantan Hospital (Beijing, China). The study protocol was approved by the Institutional Review Board of the hospital and written informed consent was obtained from all patients. The ASA (American Society of Anesthesiologists) stages of these patients were grade I and II.

Patients with immune, renal or CNS dysfunction and those with congestive heart failure, exogenous hormone therapy (including steroids), pregnancy, malnutrition, diabetes, malignancy, infection or inflammation were excluded from the study. No analgesics or tranquilizers were administered to these patients before the operation.

After entering the operation room, an intravenous infusion was given to the patient and non-invasive blood pressure (NIBP), heart rate (HR), oxygen pulse saturation (SPO2) and the bispectral index (BIS) were monitored. Demographic data of patient and details of the operation are shown in table 1.

Table 1. Demographic data of these patients and their operative data.

Target concentration infusion anesthesia was performed using propofol and sufentanil. The induction plasma concentration of was 5 μg/ml (propofol) and 0.5 ng/ml (sufentanil) respectively. The plasma concentration of propofol was reduced to 3.2 μg/ml and sufentanyl was reduced to 0.3 ng/ml when the patients were unconscious, and vecuronium bromide 0.1 mg/kg was administered. After muscle relaxation, tracheal intubation was performed. Mechanical ventilation was applied with 10 ml/kg tidal volume, 12 times/min respiratory frequency and 1 L/min oxygen flow. Intermittent administration of 0.05 mg/kg vecuronium bromide was given to maintain muscle relaxation.

During this process, mean arterial pressure (MAP) and hear rate (HR) were maintained in the basic range of +10% to −20%; and MAP <20% of baseline for hypotension patient, HR<50 beats/min for bradycardia patient or MAP>10% of baseline values for hypertension; The 6 mg of ephedrine, 0.5 mg of atropine or 0.2–0.5 mg of nicardipine was administered respectively.

Cytokine and immunoglobulin concentrations are presented as means ± SD and analyzed using SPSS 13.0 statistical software. Data were compared using the t test and Chi square test, respectively. A p value <0.05 was considered as significant. The Maunchly test was used to judge whether there were relations between the repeatedly measured data. When p<0.05, the Greenhouse–Geisser correction was used to correct the results.

A total of 18 consecutive patients were included in this study, Demographic data of these patients and their operative data are listed in table 1. No operative morbidity or mortality occurred in observation period. 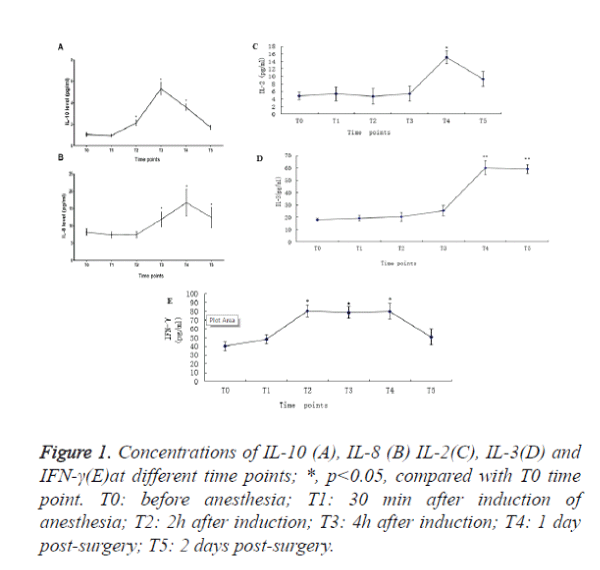 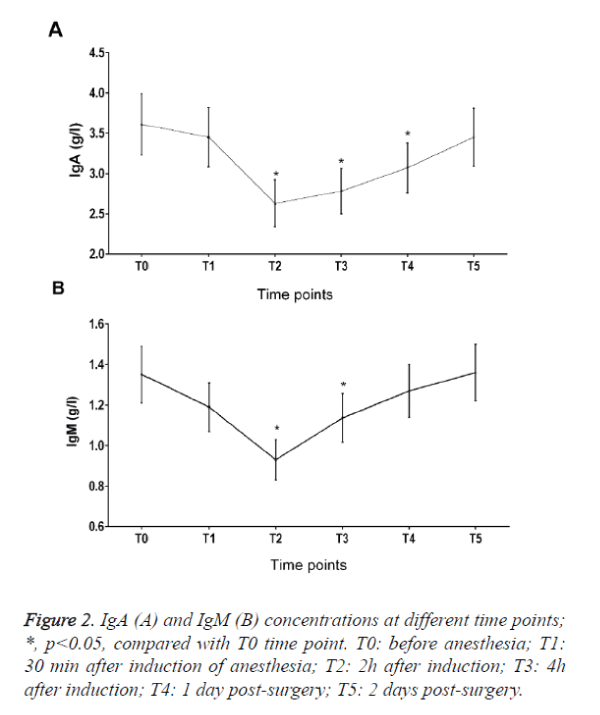 Surgery and related stress response lead to the suppression of immune function [7]. In this study, we found that IgM and IgA decreased significantly during perioperative period. In addition, a significant alteration in the levels of IL-10 and IL-8 was observed during perioperative period in patients undergoing supratentorial craniotomy. Inflammatory cells contribute to the clearance and the repairing of necrotic tissue, and dominate the local response to injury [8]. Inflammatory cells release soluble molecules, mainly include cytokines that act on distant sites from the origin of their production, while a systemic acute-phase response goes along the local inflammation, then followed by a compensatory antiinflammatory response to attenuate the proinflammatory state [3], and the balance between the pro- and anti-inflammatory responses determines the net outcome of the reaction. In major injury, disequilibrium between pro- and anti-inflammatory cytokines may start a generalized response that in turn may progress to a multiple organ dysfunction [4].

There are five types of immunoglobulins in serum, IgA, IgD, IgE, IgM and IgG, the amounts of IgE and IgD are very small, so we only measured the levels of IgA, IgM and IgG. In our study, we found that IgM and IgA decreased significantly and reach their bottom 2 hour after induction, which suggested that the immune function was suppressed.

Liu et al found that at the 30min after anesthesia induction, the neutrophils, monocytes and lymphocytes during craniotomy decreased significantly [5], which was consistent with our study.