Cutaneous endometriosis: to scope or not to scope?

Faculty of Health Science, Department of Obstetrics and Gynaecology, University of the Witwatersrand, South Africa

Endometriosis is defined by the presence of functional endometrial glands and stroma outside of the endometrial cavity. It is a common gynecological condition that affects up to 22% of all women (8-15% of women of reproductive age and 6% of premenopausal women) [1,2].

The etiology of endometriosis remains unclear. It is considered to be a “disease of theories” with its pathophysiology being only partially understood. Endometriosis usually occurs within the pelvic cavity. Common locations are the uterine wall, the fallopian tubes, the ovaries, and the pelvic peritoneum [3- 5]. Pelvic endometriosis presents clinically with a triad of symptoms: pain (chronic pelvic pain and dysmenorrhea), menorrhagia, and infertility.

Cutaneous endometriosis is very rare and is related to previous gynecological surgery. It is characterized by the presence of pigmented umbilical nodules associated with cyclical pain or bleeding during or immediately after menstruation. There is an estimated incidence of 0.03-0.15% of all cases of extra genital endometriosis [9,10]. Cutaneous endometriosis of the abdominal wall may occur due to direct seeding after laparotomy or laparoscopy [11]. The theory of lymphatic or vascular dissemination is favored in the case of umbilical endometriosis with coexisting pelvic endometriosis [12,13].

The study included women presenting with a history of painful incisional scar or umbilical nodules or bleeding from the umbilical or scar nodule during or after menstruation in the patients with a history of previous pelvic surgery. Women who presented with the above symptoms in the absence of previous pelvic surgery for either gynecological disorders or caesarean section were excluded from the study.

The study took place at a tertiary institution in South Africa in the pelvic floor and endoscopy unit at the University of the Witwatersrand between January 2010 and December 2016. Prior history was taken from all patients followed by clinical examination. Vaginal ultrasound was performed in order to exclude any pelvic pathology. Abdominal ultrasounds were performed to assess the cutaneous mass. Biopsies of the lesion were performed in all the cases. MRI was undertaken in cases where the umbilical mass or previous scar tissue was fixed to the anterior abdominal wall during abdominal examination, or was found to be connected to the fascia during abdominal ultrasound. MRI was performed in order to assess the depth of the lesion, specifically in relation to the fascia and peritoneum.

All cases with confirmed cutaneous endometriosis were admitted for a wide excision of the lesion, as well as diagnostic laparoscopy for the assessment of pelvic endometriosis.

Out of the 14 cases with cutaneous (scar) and umbilical endometriosis that were referred to the unit during the study period, only eight cases (47.2%) fulfilled the criteria of the study.

The mean age of the patients included was 35.6 years. Patient characteristics are shown in Table 1. All eight patients presented with a dark brown nodule on the umbilicus or incisional scar for a period between six months and four years (mean of 18 months) associated with cyclical pain during or immediately after menstruation. Three of the cases reported a bloody discharge from the umbilicus during menstruation (Table 1).

Six out of the eight patients (75%) had previous caesarean section. Four cases with midline incision, where the nodule was at the level of the umbilicus, two cases with Pfannenstiel incision, who presented with a painful nodule along the transverse scar. Of the remaining patients, one had a previous history of myomectomy and the other a laparotomy for uterine repair following uterine perforation during evacuation of the uterus. In all patients there was a lack of lower abdominal pain (dysmenorrhea or secondary dyspareunia). Infertility was not a reason for presenting to clinic. Per vaginal examination and transvaginal ultrasound revealed no apparent gynecological pathology or presence of endometriosis in seven out of eight patient. One patient during vaginal ultrasound was found to have a thick walled ovarian cyst of mixed echogenicity, measuring 4 × 4 cm on the left side.

Abdominal ultrasound revealed the presence of a hypoechoic superficial mass in seven out of the eight cases. One of the cases with previous Pfannenstiel incision nodule underwent MRI to determine the depth of the lesion in relation to the fascia, as the lesion on abdominal palpation was found to be fixed. Biopsy of the mass was performed for all cases. Histology revealed the presence of functional endometrial tissue (gland and stroma) and associated haemorrhage.

All cases underwent wide excision of the lesion under general anesthesia, followed by laparoscopy that served to confirm that cutaneous endometriosis was not associated with pelvic endometriosis. The patient with the ovarian cyst underwent laparoscopic cystectomy. Histology revealed the presence of a haemorrhagic corpus luteum cyst and not ovarian an endometrioma as was expected.

In the presence of previous pelvic surgery, umbilical endometriosis should be defined as cutaneous or secondary umbilical endometriosis. This is more common than PUE and is most likely due to iatrogenic direct seeding of endometrial cells either during laparoscopic or open surgical procedures [9]. In the case of umbilical endometriosis with coexisting pelvic endometriosis, the theory of lymphatic or vascular dissemination is favoured [11]. The etiology of PUE still remains unclear, despite several etiological theories having been proposed. These include coelomic metaplasia of the urachus remnant, direct extension through the round ligament or congenital presence of developmentally displaced endometrial tissue.

Cutaneous endometriosis of the anterior abdominal wall has an estimated incidence of 0.03-0.15% of all cases of endometriosis [11-13]. It is characterized by the presence of pigmented umbilical nodule of varying sizes, from a few millimeters to a few centimeters, which are associated with cyclical pain or bleeding during or immediately after menstruation (Figure 1). 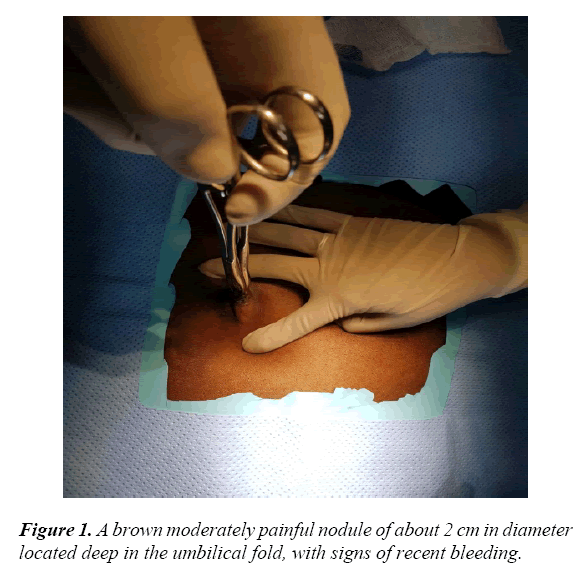 Figure 1: A brown moderately painful nodule of about 2 cm in diameter located deep in the umbilical fold, with signs of recent bleeding.

Cutaneous endometriosis involving the abdominal wall is commonly associated with surgical scars [15]. Six out of 8 cases with histologically proven scar endometriosis were found to have a previous history of caesarean section and two with gynaecological surgery. All cases had resolution of symptoms following excision of the lesion.

All eight patients that were included in this study had no clinical history suggestive of pelvic endometriosis and no infertility issues. Cyclical pain with a palpable mass is the most commonly presenting symptom of this condition. In our study, all patients had these classical cyclical symptoms. In spite of this, the diagnosis was delayed by an average of 18 months (range 6-48 months). Delay in diagnosis can be explained by the fact that our patients visited several doctors, both general practitioners and specialists in local clinics and the private sector, before deciding to have a biopsy of the lesion in at our institution.

Histology is the mainstay of diagnosis of umbilical endometriosis, as it is important to exclude other pathologies such as malignant melanoma, the “sister Joseph nodule”-a manifestation of intraabdominal malignancy- or other dermatological conditions.

MRI is the most accurate method used to determine the depth of the lesion, specifically in relation to the sheath and the peritoneum. This is an important step when the excision of the umbilical nodule is undertaken. One out of the eight cases with scar endometriosis underwent MRI, which revealed that the umbilical nodule was penetrating the fascia.

There is no standard management regime for cutaneous endometriosis, as there is a limited amount of cases available on the topic. Medical management using progesterone, danazol, norethisterone, and gonadotropin-releasing hormone (GNRH) analogues have not shown reliable results. However, some authors have reported success in relieving the symptoms and reducing the size of endometrial nodule using medical hormonal treatment [2,15].

All the cases in this study underwent complete removal of the umbilicus, with total excision of the endometriosis lesion, obtaining an adequate rim of normal tissue all around in order to avoid local recurrence (Figure 2). Reconstruction of the umbilicus was performed in all cases (Figure 3). One case underwent repair of the underlying fascia and peritoneum. Our study is comparable to other studies [1,4,16-18] that have shown that total excision of the lesion is associated with no recurrence during follow-up. The mean follow-up period for our cases was 36 months. All cases included in the study underwent diagnostic laparoscopy. No pelvic endometriosis was found during diagnostic laparoscopy. This is akin to other authors who have suggested that there is no need of laparoscopic assessment in cases of cutaneous endometriosis of the anterior abdominal wall [4,9]. The possibility of coexisting pelvic endometriosis should be investigated by postoperative follow-up. 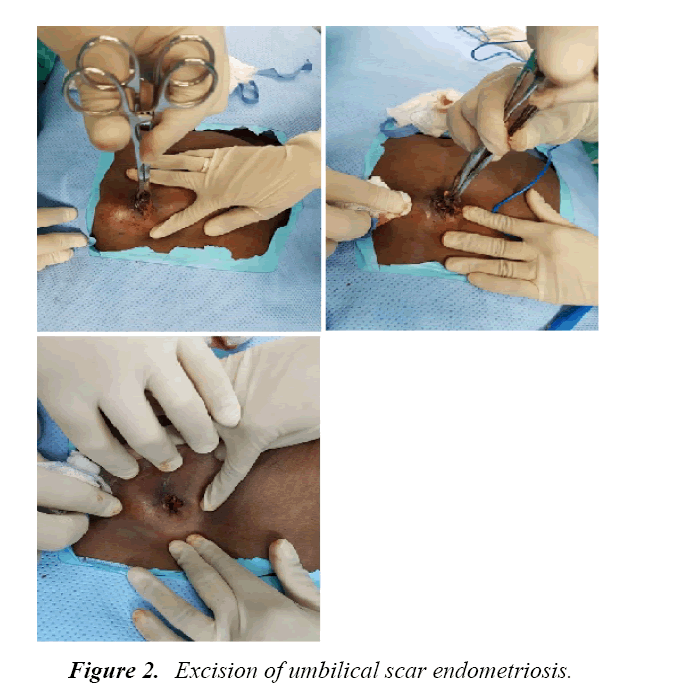 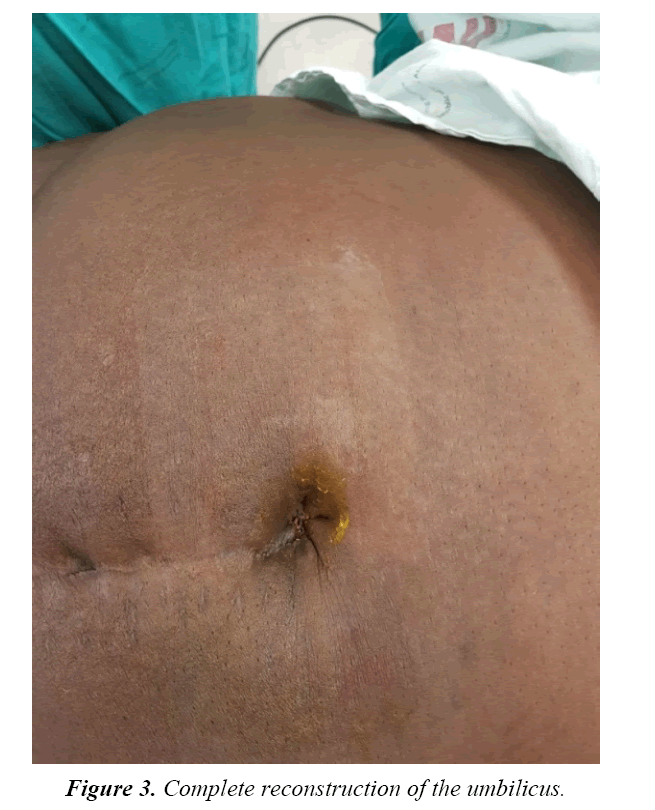 Figure 3: Complete reconstruction of the umbilicus.

Cutaneous endometriosis is an increasingly diagnosed and reported condition. The primary physician should be aware of this condition to help in early diagnosis and treatment. In patients with scar endometriosis following gynecological procedure, laparoscopy to exclude pelvic endometriosis should not be undertaken. There is a potential risk of introducing endometriosis into the pelvic cavity, as well as a risk of exposing the patient to prolonged operating time, unnecessary interventions and their potential complications. Complete excision prevents recurrence and should be offered even if it results in facial defects requiring primary closure.

No conflict of interest for any of the authors.