Curative role of the aqueous extract of the herb, Phyllanthus niruri, against nimesulide induced oxidative stress in murine liver

The present study was conducted to evaluate whether the aqueous extract of the herb, Phyllanthus niruri (PN) can effectively cure liver from nimesulide (NIM) induced oxidative stress in vivo. In our experiments, we have seen that administration of PN through intraperitoneal route is more effective in hepato-protection than oral administration. PN (100 mg/kg body weight) was, therefore, administered intraperitoneally for 5 days post to NIM application (10 mg/kg body weight/twice daily) for 7 days in mice. Levels of antioxidant enzymes like superoxide dismutase (SOD) and catalase (CAT), non-protein thiol reduced glutathione (GSH) and lipid peroxidation end-products were then determined. NIM administration caused significant depletion of the levels of SOD, CAT and GSH along with the increased levels of lipid peroxidation. Post-treatment with PN rapidly restored most of the NIM-induced oxidative changes compared to those obtained by the self recovery of liver. Histological studies supported these results. In addition, studies showed that PN could scavenge free radicals. Antioxidant property of PN has been compared with that of potent antioxidant, vitamin E. Besides, the effect of a non-relevant protein, BSA, has also been included in the study. Combining, data suggest that NIM induced oxidative stress in the liver and that could be cured by the beneficial effect of PN.

Herbal plants have been found beneficial to humans as they are the source of various medicinal compounds [1-3]. The Phyllanthus species have been shown to play benefi-cial roles against various pathological states [4-5]. Clinical studies with this herb in humans have been shown to have no side effects [6-7]. Although this herb has been reported to be effective against a number of drug and toxin-induced hepatic disorder [8-9], no report has yet been found describing the effect of this herb on NIM in-duced hepatic problems. The nonsteroidal anti-inflammatory drug, NIM, is a selective cyclooxygenase-2 (COX-2) inhibitor and is almost exclusively metabolized and cleared by the liver [10]. Recently, Sbeit et al. [11], and Schattner et al. [12], reported that NIM can cause several types of liver damage, ranging from mild abnor-mal function to severe organ injuries. Knowledge on the protective mechanisms against drug and toxin induced toxicity leads scientists to look for biologically active relevant compounds from herbal plants which can either increase the efficacy of the antioxidants or possess intrinsic antioxidant activity. In this particular study, curative role of PN was evaluated by determining the effect of the post treatment of PN on the levels of i) anti-oxidant enzymes, (namely, SOD and CAT); ii) ROS scavenger, GSH and iii) extent of lipid peroxidation (expressed as malondialdehyde equivalents), induced by NIM. Effect of a non-relevant protein, BSA, and a known antioxidant, vitamin E, were also included in the study. In addition, histological studies were carried out on the liver sections of normal mice, mice treated with NIM and mice treated with PN post to NIM administration for the determination of the ultrastructural changes of the liver due to post-treatment of PN on NIM induced oxidative stress.

P. niruri, a traditional herbaceous plant of Euphorbiaceae family, was collected from Bose Institute Experimental Farm and local markets. The fresh leaves and stems of the young plants were homogenized in 50 mM sodium phos-phate buffer, pH 7.2, at 4°C and the homogenate was centrifuged at 12,000 g for 30 minutes to get rid of unwanted debris. Supernatant was dialyzed against ice-cold water and centrifuged again under the same condition. The supernatant was collected and lyophilized. The freeze-dried material was weighed, dissolved in the same phosphate buffer and used in different experiments needed for this study.

Liver has a unique property of regeneration itself after any drug and toxin injury [13,14]. To ascertain whether the aqueous extract of P. niruri can cause the healing of the liver faster than its natural regeneration, a time course study was conducted where eight mice in each group were injected with the 100 mg of extract for 1, 2, 3, 4 and 5 days after the administration of NIM at a dose of 10 mg/kg body weight twice daily for seven days. Mice were sacrificed after 2nd, 3rd, 4th,5th and 6th day respectively. In another set, eight mice in each group were treated with only NIM and sacrificed after 2nd, 3rd, 4th 5th and 6th day. In addition, eight mice were kept as normal control. For the positive control, a well-known antioxidant agent vi-tamin E was administered to a group of mice at a dose of 200 mg/kg body weight for 5 days post to NIM administration. Another group of mice got BSA at a dose of 5 mg/kg body wt intraperitoneally for 5 days post to NIM administration.

Protein concentrations in the liver homogenates were determined according to the method of Bradford [20].

Liver specimens from all the experimental groups were fixed in 10% buffered formalin and were processed for paraffin sectioning. Sections of about 5 μm thickness were stained with haematoxylin and eosin to study the general structure of the liver.

The results have been expressed as mean + S.D. Student’s ‘t’ test was employed for all statistical comparisons. Any value of P< 0.05 was regarded as significant. 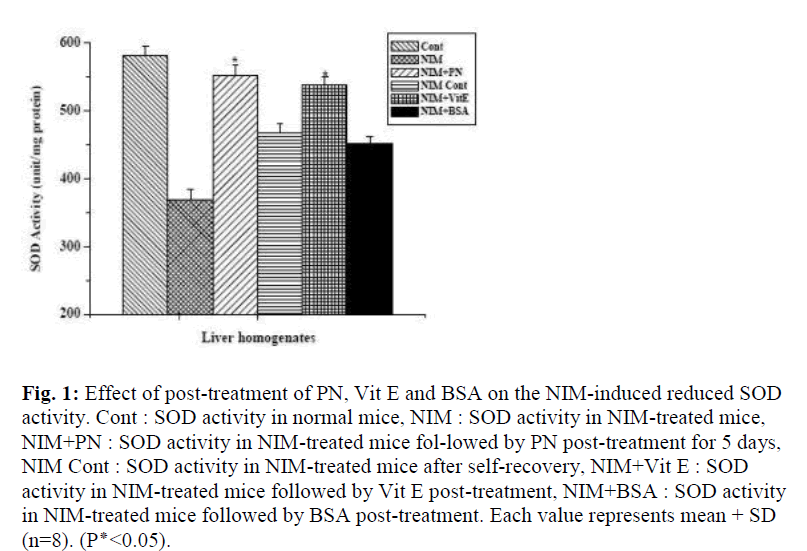 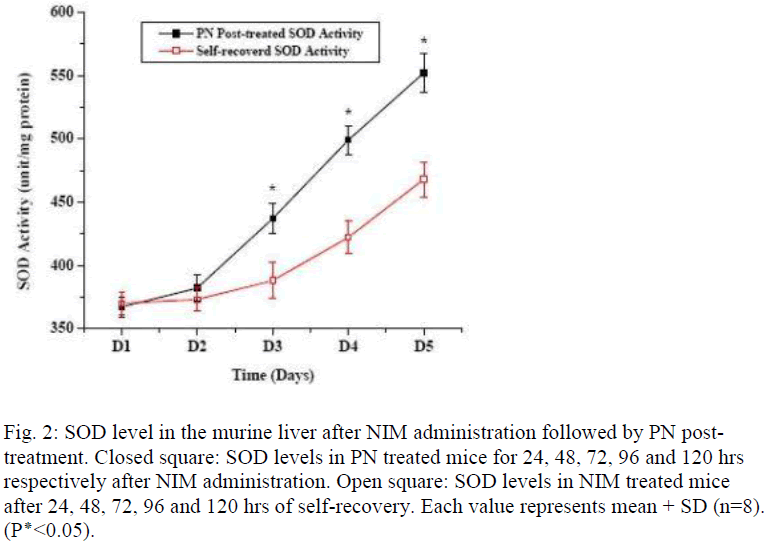 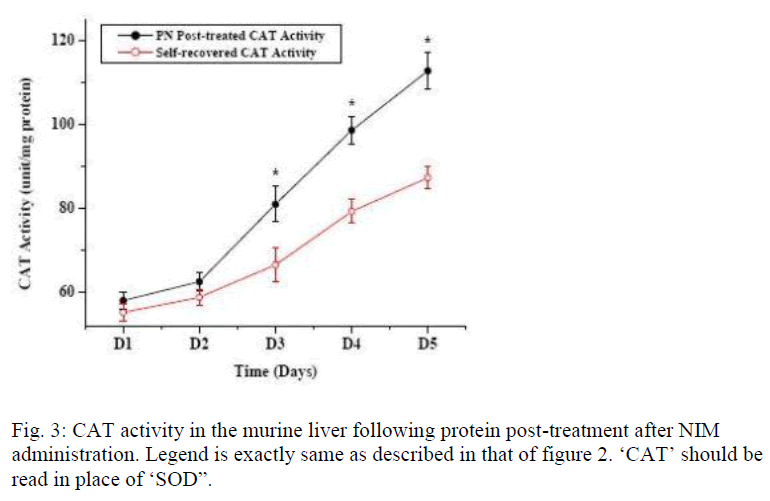 Fig. 3: CAT activity in the murine liver following protein post-treatment after NIM administration. Legend is exactly same as described in that of figure 2. ‘CAT’ should be read in place of ‘SOD”. 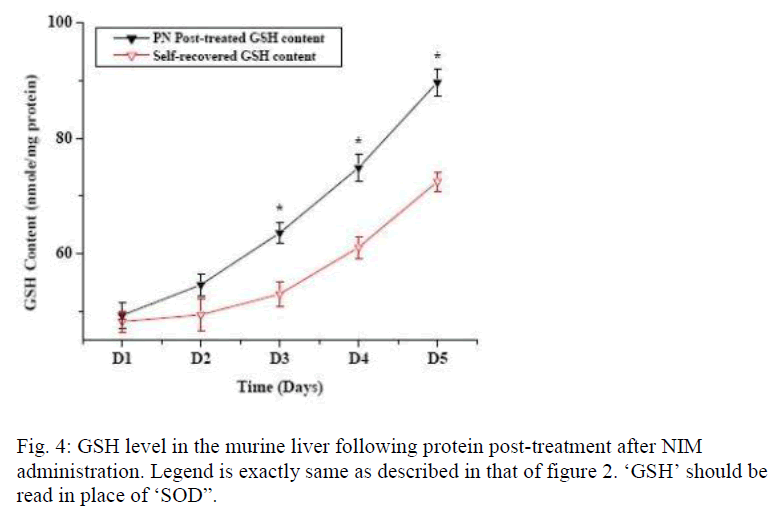 Fig. 4: GSH level in the murine liver following protein post-treatment after NIM administration. Legend is exactly same as described in that of figure 2. ‘GSH’ should be read in place of ‘SOD”. 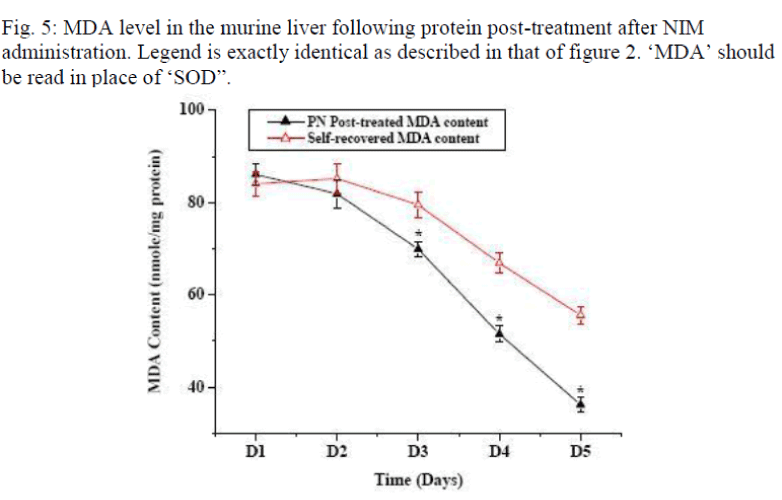 Fig. 5: MDA level in the murine liver following protein post-treatment after NIM administration. Legend is exactly identical as described in that of figure 2. ‘MDA’ should be read in place of ‘SOD”.

Histological assessment of all the liver sections in the study groups have been represented in figure 6. Figure 6A shows the normal histology of liver. Prominent changes including centrilobular necrosis, bile duct proliferation, disorganization of normal radiating pattern of cell plates around central vein etc. are observed in the hepatic tissues treated with NIM (6B). Qualitatively, the inflammations in PN treated mice liver post to NIM administration were less severe (6D) compared to that obtained after the self-recovery (6C). 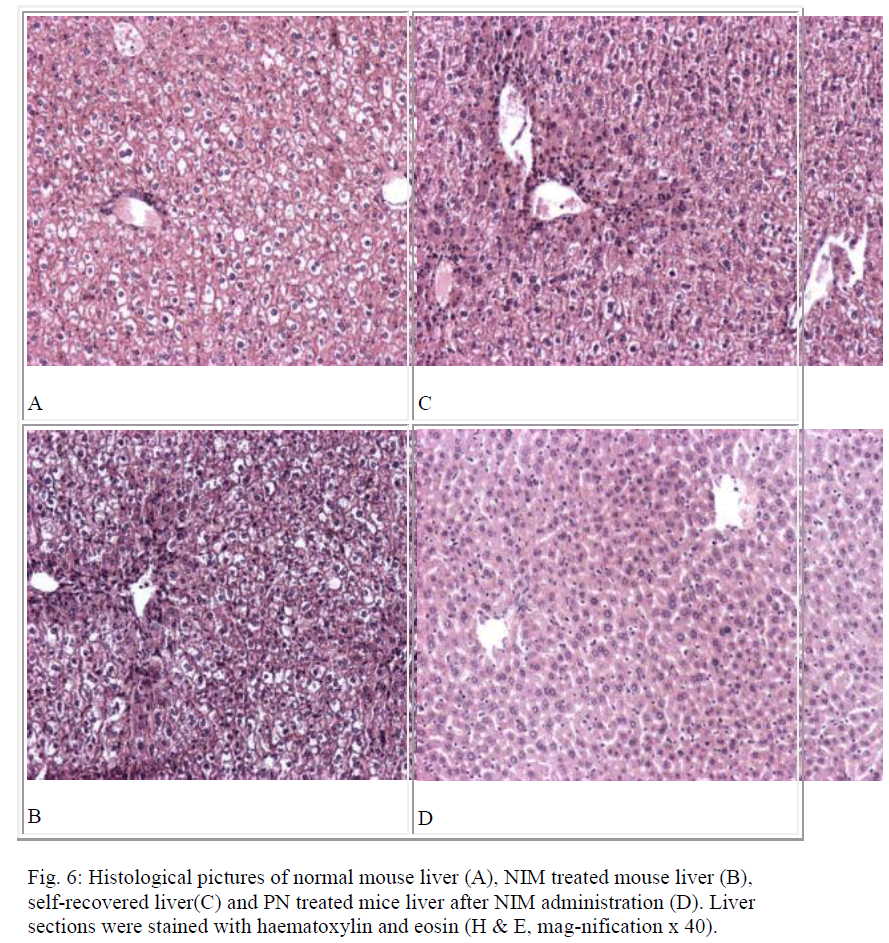 The aim of this study was to evaluate whether PN possesses any curative role against NIM-induced oxidative stress. We observed that NIM administration at a dose of 10 mg/kg/twice daily for one week significantly reduced the levels of two antioxidant enzymes, SOD and CAT and the non-protein thiol, GSH accompanied by the enhance-ment of lipid peroxidation. Administration of PN (100 mg/kg body weight) to the experimental animals, post to NIM treatment, altered the levels of antioxidant enzymes and GSH near to those present in normal liver along with significant reduction of lipid peroxidation. Histological studies support this result. Administration of BSA had no effect on this oxidative insult although similar hepatoprotective results were obtained when the animals were treated with the antioxidant, vitamin E, post to NIM administration.

Liver is the first organ to metabolize all foreign compounds and hence its injury can be induced by the exposure of various toxicants, and also by a number of drugs when taken very frequently or beyond therapeutic doses. These toxicants mainly damage liver by producing reac-tive oxygen species, ROS [21-22]. To encounter the oxi-dative stress, antioxidant defense mechanism operates in our body to detoxify or scavenge ROS. The antioxidant system comprises different types of functional compo-nents including different antioxidant enzymes, (like SOD and CAT) together with the substances that are capable of reducing ROS or preventing their formation. Both these enzymes work in a coordinated manner to quench the oxygen free radicals produced in our body [23-24]. GSH serves as a scavenger of different free radicals and is one of the major defenses against oxidative stress [25]. Besides, different antioxidants like ascorbic acid, vitamin E etc. are also known scavengers of these ROS [26-27]. Results of our studies indicate that NIM induces oxidative insult and suggest that the antioxidant defense of the body has been suppressed effectively by NIM. Post-treatment studies showed that treatment with PN for two days prac-tically could not alter the levels of CAT, SOD, GSH etc. However, post-treatment for 3, 4 and 5 days significantly reduced the increased MDA level and elevated the decreased levels of the antioxidant enzymes and GSH. PN acted in a time dependent manner and post-treatment for 5 days had the most significant curative effect. Although with the help of its self-recovery mechanism, liver recovered to some extent by its own after NIM -induced oxida-tive stress, but the recovery process was rapid when the mice were post-treated with PN. Liver histology of NIM treated mice showed considerable necrosis along the central vein. The sizes of the hepatocytes were also larger and balloon like compared to those in the normal mice liver. The necrosis was mostly centrilobular and extend-ing through the whole liver lobule (6B). A little improvement has been observed due to self-recovery of liver (6C). On the other hand, the inflammations in the livers of post-treated mice were less necrotic (6D). Combining all, the data suggest that PN possesses curative role against NIM induced oxidative stress in mice.

In conclusion, we would like to mention that the curative role of PN against NIM-induced hepatic disorder is probably due to its antioxidant properties. It is likely that the active ingredients of the herb might be able to subside the side effects of this anti-inflammatory drug. To have a clear picture, further investigation is needed to identify and fully characterize the active principle(s) and is currently in progress.

The study was supported in part by the Council of Scientific and Industrial Research, Government of India (Project sanction number : 01/1788/02/EMR-II to P.C.S). We are grateful to Mr. Prasanta Pal for his excellent technical assistance. 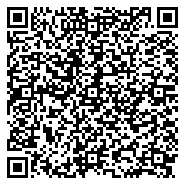