Objective: To explore the value of Computed Tomography (CT) examination in the diagnosis of nonsmall cell lung cancer.

Conclusion: CT detection method can effectively improve the detection accuracy and patient satisfaction of non-small cell lung cancer. Therefore, it is worthy of promotion and application in clinical diagnosis.

With the continuous improvement of living standards, the incidence of lung cancer is also rising. As a common respiratory disease, lung cancer has the highest incidence in various clinical malignancies, becoming a serious threat to the patient's life and health. Therefore, the timely detection of lung cancer, effective analysis of pathology and appropriate treatment are important ways to improve the survival rate of patients [1]. In clinical medicine, lung cancer is divided into non-small cell cancer and small cell cancer, of which nonsmall cell lung cancer is more common with an incidence 4 times of small cell lung cancer. At present, it is believed that imaging diagnosis and TM detection are the main means of early detection of lung cancer [2]. In order to explore the difference between CT and TM diagnosis, we selected patients with Non-Small Cell Lung Cancer (NSCLC) in our hospital from December 2015 to December 2016. The patients were examined by CT and TM for the comparison of the diagnosis effects.

CT examination: Patients in observation group were examined by a Siemens Emotion spiral CT scanner (Siemens from Germany, 16 rows) with a pitch of 1.5, 130 kV, 130 mA, 1.5 s. Layer thickness was 8 mm and layer spacing is 8 mm. before the beginning, patient needed a deep inspiratory for scanning from the tip of the lung to the diaphragm angle in the lesion area (3 × 5 mm thin layer scan) (Figures 1 and 2). The implementation of the scan required more than three senior practitioners to perform in order to improve the accuracy of reading film. 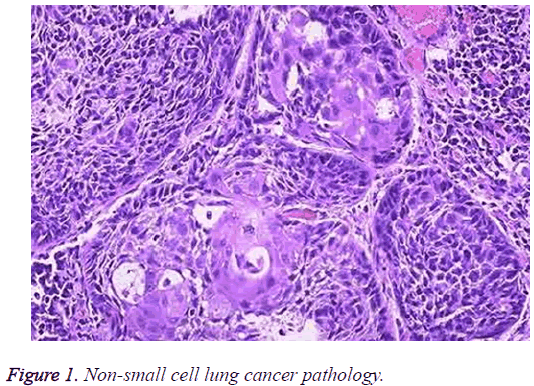 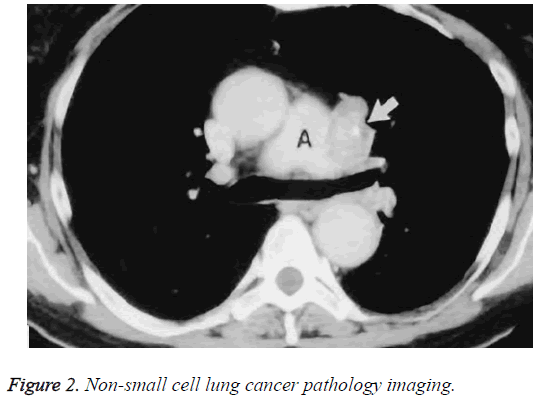 Determination of serum TM: The venous blood of patients was taken in the morning for determination of serum TM. The keratin 19 fragment (CYFRA21-1) was detected by Immunoradiometric Method (IRMA method) based on chemiluminescence method. The serum Carcinoembryonic Antigen (CEA) was determined, which positive standard CYFRA21-1>3.3 ngml, CEA>ngml.

SPPS17.0 statistical software was used in analysis of data and t test was used for count data, described as (͞x ± s). In Chi-square test, P<0.05 was defined as a significant difference.

There was significant difference between the mean CT values of non-small cell lung cancer between groups (P<0.05, Table 3).

Lung is an organ where primary cancer and cancer cell metastasis are prone to occur [2]. Lung cancer is a common respiratory disease in clinic, and it has poor prognosis. Studies have shown that timely and accurate treatment program on non-small cell lung cancer could effectively enhance the prognosis [3]. However, the timely diagnosis of lung cancer was not common in medical profession, which was realizedc only after the emergence of the relevant symptom. Previous cases of suspected primary lung cancer were diagnosed by traditional X-ray examination. Although the operation of X-ray chest radiograph was simple and convenient, but because of its high rate of missed diagnosis, therefore, the credibility of clinical diagnosis was low [4]. The incidence of primary lung cancer was increasing year by year. At present, the inducement mechanism was not clear, and some scholars pointed out that it may be related to genetic factors, hormone levels, and longterm radiation there [5,6]. The traditional color Doppler ultrasound remained the major diagnosis that could clearly observe the tumor location, echo and blood flow. However, restricted by the low resolution, this diagnosis had low diagnostic rate of tumor with smaller diameter, which resulted in high risk of misdiagnosis [7].

With the continuous development of medical research and clinical treatment level, multi-slice spiral CT imaging diagnosis technology is widely used in clinical diagnosis of malignant tumors [8]. Multi-slice spiral CT could make threedimensional observation and analysis on morphological findings of the lesion in patients with primary cancers through multiple layers observation and planar reconstruction function. In the actual inspection process, multi-slice spiral CT could achieve a comprehensive analysis on the lesion density, size, location, number, shape, edge, the surrounding details and the internal structure, which not only improve the detection rate, but also reduce the rate of misdiagnosis. In other words, this technique provided substantial basis for the diagnosis and treatment of primary lung cancer patients [9,10]. With the development of clinical diagnosis and treatment technology, CT was gradually applied to the clinical examination of primary lung cancer. The inspection method had characteristics of simple operation, repeatability, high accuracy and low interference during the peripheral vascular scan [11]. With the development of imaging technology, CT diagnosis technology has been improved, which was able to quantify the concentration of the base material, greatly improving the accuracy of the diagnosis and providing basis for lung cancer diagnosis [12]. In the course of the test result comparison, it was found that the coincidence rate in CT group was 88.9%, which was significantly higher than that of the control group (60.0%). Besides, the satisfaction rate of the patients in CT group was also significantly higher than that in the control group. Sun Hu pointed out that CT test coincidence rate was significantly higher than TM detection coincidence rate in his work CT Joint TM Determination of Value in the Diagnosis of Non-Small Cell Lung Cancer. Obviously, the result of this study had the similar conclusions.

In summary, the use of CT detection as a non-small cell lung cancer detection method had high diagnostic value and patient satisfaction rate. It is worthwhile to be popularized in clinical practice.