Stressful experiences include major life events, trauma, and abuse and are sometimes re-lated to the environment in the home, workplace, or neighborhood. Acute stress and chronic can both have long-term consequences. Therefore, this study was carried out to investigate cortisol, total testosterone and total homocysteine (tHcy) status in acute myocardial infarc-tion (AMI). Thirty AMI patients were included and diagnosed based on clinical examina-tion, laboratory investigations, electrocardiogram, angiography and other tests. The blood samples were analyzed for cortisol, total testosterone and tHcy. Significantly increased levels of serum cortisol and tHcy, and decreased level of total testosterone were noticed in the pa-tients group as compared to control subjects. Whereas, we found positive and significant correlation between cortisol : testosterone (C/T) ratio and tHcy, and mean blood pressure in AMI patients. This study suggests that, some methods require which reduces the C/T ratio and homocysteine levels may reduce the risk of AMI.

Neuroendocrine mechanisms are involved in the production of social inequalities in coronary heart disease. Reduced variability in heart rate, indicating predominance of sympathetic over parasympathetic activity, is linked with adverse work characteristics and anxiety and separately with increased risk of sudden death [4]. Depression, which is linked with excessive production of glucocorticoids, predicts future coronary disease [5]. Cushing's syndrome is characterized by central obesity and increased risks for hypertension, diabetes, and coronary disease. Central obesity is linked with both of these degenerative diseases and is a feature of low socioeconomic status. The metabolic syndrome of central obesity, glucose intolerance, insulin resistance, lipoprotein disturbances, and reduced fibrinolysis, secondary to altered functioning of the hypothalamic-pituitary-adrenocortical axis, may mediate effects of the psychosocial environment on coronary risk [6]. The challenge of a car driving simulation showed that, consistent with a neuroendocrine conditioning effect, low reactivity was linked with high self esteem. Assessed by a standard psychometric method, self esteem was unre-lated to cortisol concentration at baseline but was inversely related to the amount of increase during the challenge [7].

The contribution of stress to coronary heart disease (CHD) risk has been investigated for many years, but considerable disagreement remains about whether stress influences CHD and, if so, the relative importance of this compared with other CHD risk factors [8,9]. Our aim was to assess the changes in serum concentrations of cortisol, testosterone and homocysteine levels after AMI and to evaluate the diagnostic utility of these parameters as early non-invasive markers of stress.

This study was carried out at Department of Biochemistry, Grant Medical College and Sir J. J. Group of Government Hospitals, Mumbai. All participants completed a medical history form and provided informed consent. The presence of coronary heart disease at baseline was determined by the Rose questionnaire for myocardial infarction, the electrocardiogram results, and a self-reported confirmation of heart disease diagnosed by a physician [10]. Thirty (30) AMI patients were included in the present study. All the AMI patients were diagnosed based on clinical examination, laboratory investigations, electrocardiogram, angiography and other tests. The control group consist of 30 normal healthy subjects, having age ranging 20 to 65 years matched with the patients. All the controls were symptom less on clinical examination.

Venous blood samples were collected in test tube with aseptic precautions. After 2 hours of collections sample was centrifuged at 3000 rpm for 5 minutes. Serum was separated and collected in polythene tube with cork. The sera with no sign of hemolysis used for the analysis of cortisol, total testosterone and total circulating homocysteine (tHcy).

Numerical variables were reported in terms of mean and standard deviation. Statistical analysis of results was done by normal ‘z’ test. In this analysis, variables showing p value less than 0.05 and 0.001 were considered to be statistically significant and highly significant respectively. Pearson correlation test was used to test. 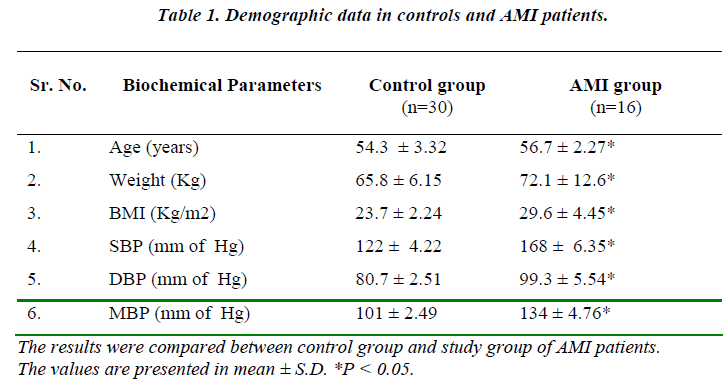 Table 3: Correlation of C/T ratio and Homocysteine, and mean blood pressure in patients with AMI.

Serum cortisol level was significantly increased (p<0.001) in cases of AMI. Kumari et al [8] studied animal model of stress-induced acceleration of atherosclerosis that provides scope for future studies into its etiology/pathogenesis, the mechanisms through which stress can increase disease risk are currently poorly understood.

Serum testosterone concentration was significantly (p<0.001) decreased in AMI patients whereas cortisol : testosterone ratio were significantly (p<0.001) increased in our study group as compared with normal subjects. Cortisol and testosterone secretion are interrelated. Activation of the hypothalamo-pituitary-adrenal axis not only results in an elevation of adrenal corticosteroids but also inhibits gonadotrophin secretion [22], which will result in a secondary reduction of testosterone concentration in the male. Therefore, decreased testosterone and increased C / T ratio in AMI which corroborates with the other studies, [23-27] is a useful proximal marker of processes that may lead to increased risk of CVD.

Hyperhomocysteinemia, in such AMI patients was found in our study might to be due to alteration of cardiac func-tions. Homocysteine is a sulphur-containing amino acid that results as an intermediary product of the methionine degradation pathway. The folic acid and vitamin B12 or B6 deficiencies can play a role as cofactors that increase homocysteine levels. Additional studies have shown a negative correlation between homocysteine levels and folic acid and vitamin B12 and B6 plasma levels [28,29]. In this study we cannot estimate serum vitamin B. Several studies have been performed to demonstrate association between homocysteine levels and cardiovascular diseases which corroborates with the work of Gravina-Taddei, Yadav et al [3,31].

Better correlation between the cortisol : testosterone ratio and homocysteine in overall AMI patients was statistically positive (r = 0.899) and significant (p < 0.001) were observed (Figure 1). The correlation coefficient (r) 0f 0.457 (p > 0.001) between the serum cortisol : testosterone ratio and MBP level was good (Figure 2). These correlations were in agreement with the findings of Smith et al [31]. 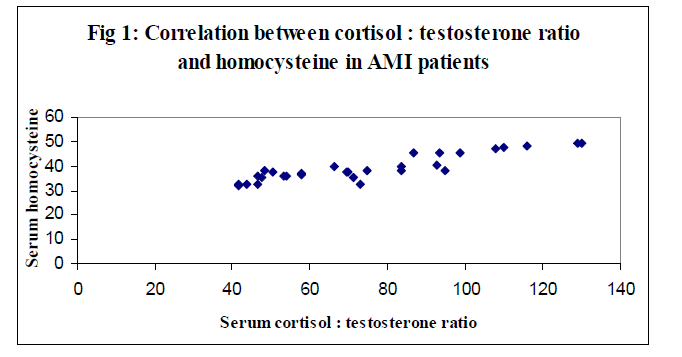 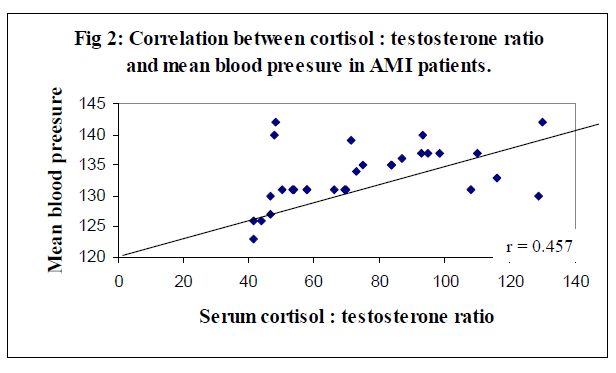 We can conclude that biochemical screening such as cortisol, testosterone and homocysteine is of paramount importance in all AMI patients. This study suggests that, some methods require which reduces the C/T ratio and homocysteine levels may reduce the risk of AMI. On the other hand, there is an absolute need for large studies designed to answer the question as to whether adrenal dysfunction are associated with increased risk for CVD and whether therapy of these disorders might influence cardiovascular mortality. Further studies should help define the role of genetic polymorphism in increased cortisol, reduced testosterone and homocysteine metabolism enzymes and their role in AMI patents.