Correlation of hypothalamic activation with malocclusion: An fMRI study

In recent years, it has been suggested that mandibular malposition, resulting from either malocclusion or improper occlusal reconstruction, is associated with physical complaints, while all stress information is combined at the hypothalamus. In this study, we assessed the hypothalamic activation in a malocclusion model in healthy humans. Eight healthy subjects with normal occlusion participated in this study. Their hypothalamic activities during clenching in a mandibular retrusive position, which is one form of malocclusion, were examined with functional magnetic resonance imaging (fMRI). Individual analyses showed that clenching at the mandibular retrusive position significantly increased the blood oxygenation level-dependent (BOLD) signals in the hypothalamus in two of the subjects. The results suggest that depending on the individual, mandibular malposition affects the hypothalamus which responds by directly inducing stress. In the future, fMRI may serve as a useful tool for individual diagnosis, as sensitivity of the malocclusion depends on the individual response.

Indefinite physical complaints are often raised by patients due to the mandibular retrusive position, which results from either malocclusion or improper occlusal reconstruction. Our previous study indicated that these abnormal phenomena affect the limbic activity of the human brain [1].

Our previous functional magnetic resonance imaging (fMRI) study showed that occlusal dysfunction significantly increased blood oxygenation level-dependent (BOLD) signals in the anterior cingulate cortex, insula, prefrontal cortex, and amygdala with group (random effect) analysis on SPM2 [1]. However, perception of the occlusal condition varies among individuals. That is, the stress response of one person may not be the same response of another person under the same situation. In this study, therefore, we focused on the hypothalamic activation of the human brain for individual analysis on SPM2.

Twelve healthy subjects with no history of any psychiatric or neurological illness participated in this study. Written informed consent was obtained from each subject after explaining the aims and methodology of the study. This study obtained approval from the local ethics Committee of Nishimino Welfare Hospital (Gifu, Japan). Four subjects were excluded due to unacceptable head motion during the experiment, resulting in fMRI data from eight subjects (6 males and 2 females, aged 26 to 56 years, mean age 37.7 years).

Two maxillary splints were produced for each subject, starting with two 0.5 mm thick polyvinyl chloride sheets that were formed to the shape of the maxillary dentition. One of these formed sheets was the control splint (Fig. 1, left). Self-curing dental resin was added to the anterior region of the other formed sheet, and while the resin was still malleable, it was fitted onto the subject’s maxillary dentition, using the chin-point technique with the thumb and one finger on the chin to guide the mandible backward and upward [7] so that the mandibular anterior dentition was pressed into the soft resin. The authors allowed the resin to harden, and this unit served as the maxillary splint that would force the subject’s condyle into the rearmost position in the mandibular fossa during clenching (Fig. 1, right). The authors determined the mandibular shift produced by each splint with CADIAX (Computer Aided Axis Recording; GAMMA-DENTAL, Klosterneuburg, Austria). In order to reduce measurement error, a single experienced technician tested each subject three times. 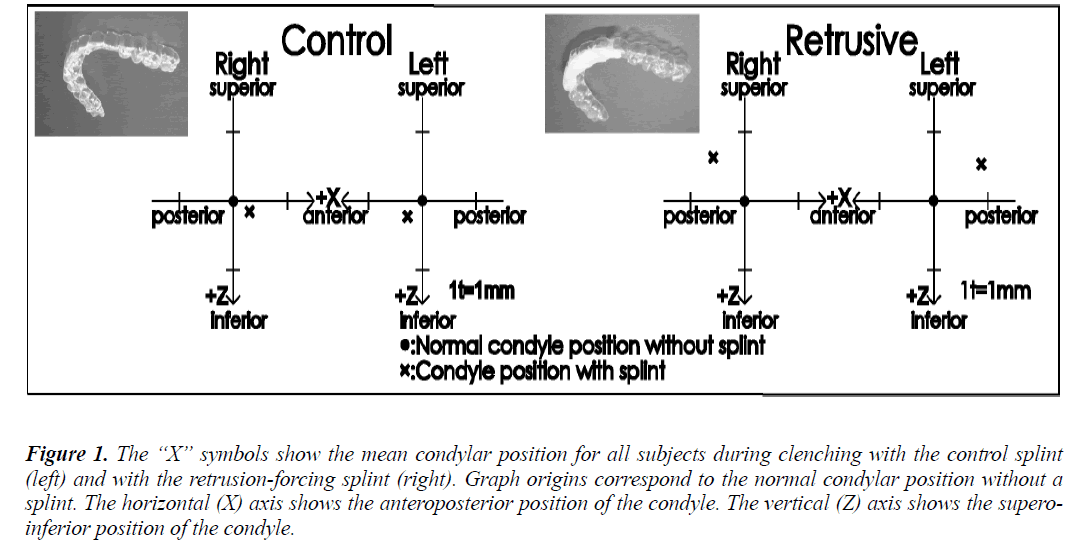 Each subject performed maximum voluntary clenching (MVC) tasks with each splint. With one of the splints in place, each subject performed a series of four cycles of clenching, each cycle consisting of 32 s at MVC and 32 s of rest. A recovery/reset period of 20-30 min separated the two clenching series (retrusive splint and control splint) in each subject in order to eliminate the influence of one task on the other. A 1.5-T Horizon MRI scanner (General Electric Company, Fairfield, CT, USA) produced first functional (T2* weighted) images and then an anatomical (T1 weighted) image for each series in each subject. The functional images were echo-planar image volumes that showed BOLD contrast in the axial orientation (TE, 44 ms; TR, 4000 m203-s). Each image volume encompassed the entire brain with a stack of 42 slices, each of which was a 64 x 64 matrix (voxel size, 3.75 mm x 3.75 mm x 4 mm; slice thickness, 3.8 mm; gap, 0.2 mm). For each experimental condition (mandibular retrusive position and control position), 72 volumes were recorded without pause. Because unstable magnetization routinely degrades the quality of the first 8 volumes, the start of the first cycle of clenching was timed to coincide with the beginning of the ninth image volume.

For data analysis, the first 8 volumes were discarded because of instability of magnetization. Head motion was monitored with the use of an analytical software package (MEDx, Medical Numerics, Inc., Sterling, VA, USA) and was rejected if values were shifted more than 0.75 mm (20% of voxel size) in any direction during a run. Independently, the SPM2 software (Wellcome Department of Cognitive Neurology, London, UK) corrected for head motion. We confirmed that all residual-motion artifacts were less than 0.01 mm (0.267% of a voxel). We normalized the 128 functional images (2 runs, 64 image volumes per run) for each subject to the MNI template provided by the Montreal Neurological Institute [8] and spatially smoothed them using an 8-mm Gaussian kernel with SPM2. The statistical analysis was based on the general linear model approach [9]. Global drift was removed in BOLD-signal values by proportional scaling and then the global mean value was subtracted from each voxel to arrive at the BOLD signal strength for that voxel.

The result of fMRI analysis is used as a localization mask for picking up only hypothalamic activity.

Table 1: Significant Increases in the fMRI Signal of the hypothalamus during clenching at the retrusive position: Maximal t Values with Co-ordinates as Given in the Talairach and Tournoux Atlas (1998) 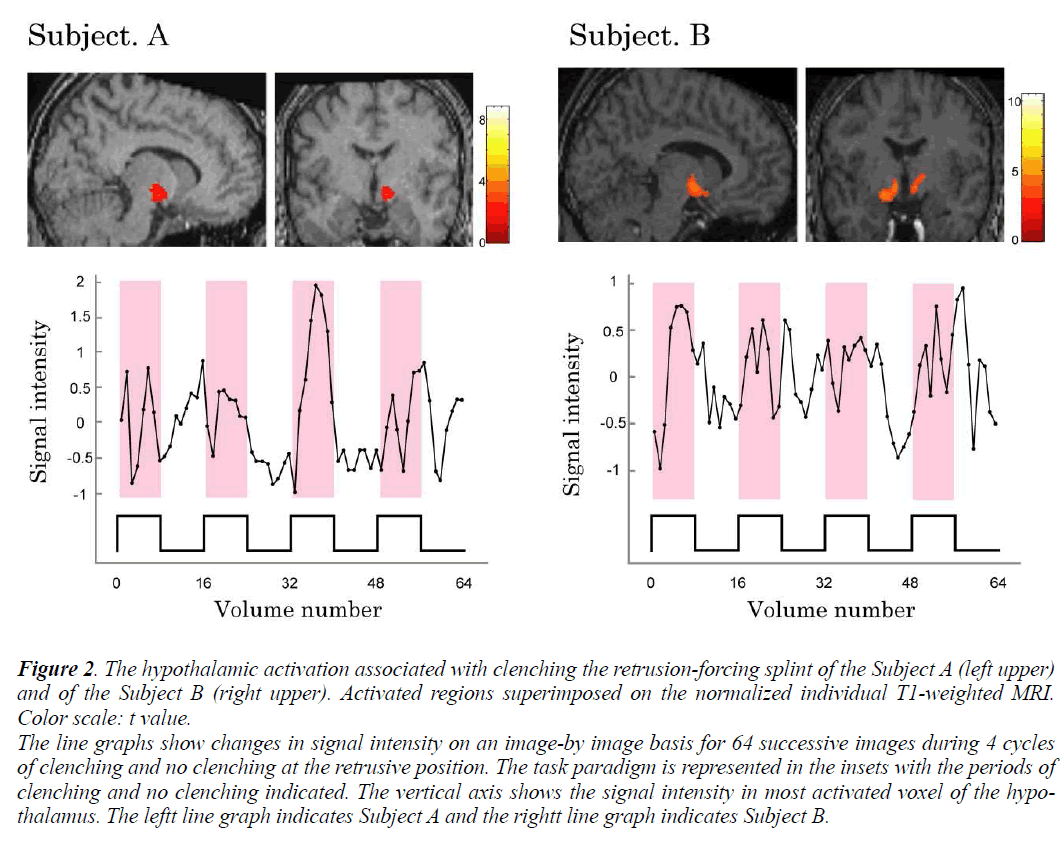 Figure 2: The hypothalamic activation associated with clenching the retrusion-forcing splint of the Subject A (left upper) and of the Subject B (right upper). Activated regions superimposed on the normalized individual T1-weighted MRI. Color scale: t value.
The line graphs show changes in signal intensity on an image-by image basis for 64 successive images during 4 cycles of clenching and no clenching at the retrusive position. The task paradigm is represented in the insets with the periods of clenching and no clenching indicated. The vertical axis shows the signal intensity in most activated voxel of the hypothalamus. The leftt line graph indicates Subject A and the rightt line graph indicates Subject B.

In this study, we found that clenching at the mandibular retrusive position resulted in increased BOLD signals in the hypothalamus of two of eight subjects by individual analysis. According to our previous fMRI study [1], mandibular retrusive position significantly activated the oral region of the primary sensorimotor cortex, the premotor cortex, the insula, the prefrontal area, the anterior cingulate cortex, and the amygdala by group analysis. The interview after the experiment revealed that during the clenching, all subjects were under stress, and they experienced slight pain at the masseter and temporal muscles. These results suggested that various physical complaints due to malocclusion may be mediated by emotion pathways. Moreover, the influence of mandibular retrusive position on the hypothalamus, which plays a key role in stress response, varies in person to person.

The hypothalamus integrates somatic and visceral responses in accordance with the needs of the brain [10]. The HPA axis regulates the secretion of cortisol from adrenal glands in response to stress. Corticotropin releasing hormone is the chemical messenger between the paraventricular nucleus of the hypothalamus and the anterior pituitary gland. Adrenocorticotropic hormone released by the pituitary gland travels in the bloodstream to the adrenal gland lying atop the kidney, where it stimulates cortisol release. Cortisol contributes to the body’s physical response to stress [10]. The hypothalamic activation in this study may be the direct stress response to experimentally induced mandibular deviation.

The masticatory organ has many sensory inputs to the brain. Therefore, mandibular deviation may cause sensory neurons in the temporomandibular joint and surrounding structures to feed somatosensory and affective circuits in the brain. After an interaction process among structures in the brain, it may then cause not only local pain and tenderness in the oral region, but also stress, fatigue, depression, and/or non-specific wide-ranging pain that is not obviously linked to the oral region. Therefore, dental practitioners need to understand that any dental treatment that changes a patient’s occlusion is a double-edged sword that can work for good or for ill. On one hand, good occlusal therapy may cure, for example, a patient’s nagging neck pain and depression as well as their temporomandibular disorder, while on the other hand, misguided occlusal therapy (or prosthodontic therapy that inadvertently produces a poor occlusion) may create one or more of these same problems.

Additionally, the fMRI may serve as a useful tool for individual diagnosis of malocclusion in the future, as the effects of the malocclusion depends on the individual response.

This work was performed at the Research Institute of Occlusion Medicine and Research Center of Brain and Oral Science Kanagawa Dental University and supported by a grantin- aid for Open Research from the Japanese Ministry of Education, Culture, Sports, Science and Technology, and Grant-in-Aid for Scientific Research from the Ministry of Education, Science and Culture of Japan (18592254). 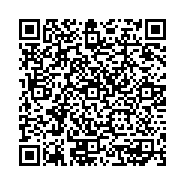