Objectives: A phase II study was conducted to investigate the safety and efficacy of a regimen of cisplatin (DDP) plus paclitaxel (PTX) concurrent with radiotherapy (RT) in patients with locally advanced cervical squamous cell carcinoma (LACSC).

Conclusion: CCRT with DDP plus PTX produced an encouraging and OS rates and ORR with relatively tolerable hematological toxicity.

Cervical cancer is the second most common female malignant tumor after breast cancer, and is the second most common cause of death from cancer in women [1]. More than 50 percent of patients have been diagnosed with locally advanced cervical carcinoma (LACC) in the first visit, posing a challenge to the surgery. Pelvic concurrent chemoradiotherapy (CCRT) is recommended for LACC according to NCCN Guideline [2,3]. Cisplatin (DDP), one of the most effective agents for various cancers, is widely used in the treatment of cervix carcinoma [4]. Several studies demonstrated that combination of DDP and radiotherapy significantly improved the clinical outcome of advanced cervical cancer, compared to radiotherapy alone. Thus, DDP-based CCRT was rapidly adopted in clinical practice for the standard treatment of LACC [5]. Recently, some novel chemotherapeutic regimens based on DDP for CCRT appeared, such as DDP plus 5-FU, DDP plus gemcitabine and DDP plus paclitaxel (PTX), etc. CCRT with PTX plus DDP was reported to be the superior choice of concurrent chemotherapy regimen for LACC, concerning to its better 5-y disease-free survival rate and good tolerance [6]. Yet, more prospective data is still needed to validate those outcomes. Locally advanced cervical squamous cell cancer (LACSC) accounts for more than 90% of LACC. In the present study, we conducted a prospective single-arm phase II trial to evaluate the efficacy and tolerability of the definitive CCRT with PTX and DDP regimen in patients with LACSC.

Eligible LACC patients admitted to our hospital in-between April 2012 to May 2015 were registered for possible participation in this study. Based on the inclusion criteria, a total of 34 patients were enrolled. The inclusion criteria were: newly diagnosed with histologically confirmed LACSC; age<75 y; and a Karnofsky performance status ≥ 70. The exclusion criteria were: metastatic disease; previous treatment for cervical cancer; and hepatic, renal, or cardiac dysfunction. Normal bone marrow, liver, and renal function were confirmed before treatment.

CCRT regimen applied in the present study was PTX plus DDP (TP) chemotherapy combined with radiotherapy. The first cycle of concurrent chemotherapy was started on the initial day of radiotherapy. Patients were given PTX (135 mg/m2, intravenous, day 1) plus DDP (30 mg/m2, intravenous, day 1-3), repeated every 21 d. Patients were allowed to continue the second course during radiotherapy with acceptable adverse effects. Pre-treatment before PTX was applied as required: 27 tablets of dexamethasone administered orally (0.75 mg/tablets) at 12 and 6 h before PTX treatment successively, while 600 mg climetidine and 25 mg phenergan injection given half an hour before PTX.

If grade III or higher hematological toxicity occurred or a nadir granulocyte count<500/mm3 or platelet count<50,000/mm3 were found and persisted, then chemotherapy, DDP and PTX, was suspended until recovery and the regimen dose reduced sequentially by 25%. In addition, chemotherapy would be stopped if any of the following situations occurred: patients requiring a delay in therapy of>2 weeks or>2 dose reductions.

In our study, both external beam radiotherapy and brachytherapy were used. Patients underwent 3-dimensional conformal radiotherapy (3DCRT) or intensity-modulated radiation therapy (IMRT) with 6 MV X-ray. Computerized imaging was used to define the target volumes. Details of radiotherapy plan were described as follows: 1.8 Gy/fraction, 5 fractions a week, 45 Gy in 25 fractions to the planning target volume (PTV) in 5 weeks. And then boost was given with 5-10 Gy to gross tumor lesion. Patients would receive after-loading radiotherapy with 192 Ir at the late period of external beam radiotherapy according to the tumor regression. The prescribed dose of brachytherapy was 20-30 Gy in 4-6 fractionstwice a weekadded up to a total dose of 70-80 Gy for the para-cervical reference point, point A (Table 1).

During treatment, blood cell counts were assessed biweekly. Patients were screened for other adverse symptoms daily. Toxicity was evaluated according to the common toxicity criteria version 3.0.

After completion of therapy, the patients were observed every 3 months for 2 y, and then on a half-yearly basis. Follow-up examinations included functional assessments of bone marrow, the liver, and the kidneys. Electrocardiogram, chest CT, and ultrasonography or CT/MRI of the abdomen and pelvis were carried out. Biopsies of suspicious areas detected by imaging were performed. The last patient follow-up was in October of 2017. The median follow-up time was 38 months (range, 24-42).

This prospective phase II study was carried out with strict adherence to the Declaration of Helsinki. The study protocol was reviewed and approved by the Ethics Committee of Suzhou Municipal Hospital (East Branch). Written informed consent was obtained from all participants.

We analyzed short-term efficacy, and 1, 2, and 3-y overall survival (OS) rates, and toxicity frequencies. OS rates were subjected to Kaplan-Meier modeling in SPSS (version 11.0). All endpoints were observed from the first day of treatment until death or the last follow-up evaluation (Figure 1). 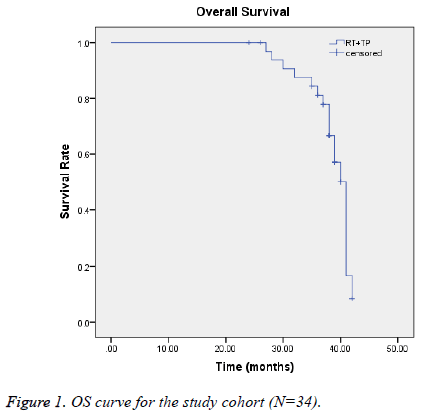 Demographic variables of the patients

From April 2012 to May 2016, we enrolled 34 patients to this study. Mean age of these patients was 60 y (range 35 to 74 y). The demographics and clinicopathologic characteristics were summarized in Table 2. All patients completed radiotherapy and 2 cycles of concurrent TP chemotherapy per protocol. The last follow-up time was October 2017. The median follow-up time was 38 months (range, 24 to 42 months).

Toxicities of the treatment in our trial were summarized in Table 5. Previous studies showed that the most frequent acute adverse events were grade III or IV neutropenia and leukopenia. But in the present trial, grade III myelosuppression was 35.3% (12/34) and no patient suffered from grade IV bone marrow suppression. Non-hematological adverse events were mild and well tolerated. Nausea/vomiting were common during time of chemotherapy, with grade I (26/34) and grade II (8/34) gastrointestinal reactions. Radiotherapy-related adverse events included mainly vaginitis (28/34 (grade I), 6/34 (grade II)), proctitis (28/34 (grade I), 6/34 (grade II)) and cystitis (30/34 (grade I)). No grade III or IV radiotherapy-induced toxicity was observed. And there was no treatment relevant toxicity for liver, kidney or heart occurred.

The present study showed that CCRT with DDP plus PTX had good short-term efficacy and encouraging OS rates with relatively tolerable hematological toxicity. The presently examined multi-drug regimen of TP in CCRT for LACC has previously been shown to yield superior outcomes relative to other DDP-based regimens [6]. The use of CCRT has increased the 5-y OS rate of patients with LACC significantly, by up to 6% [7].

PTX, a taxane compound, has been shown to have high efficacy against solid tumors, especially epithelial ovarian cancer, lung, and breast cancer tumors [8]. PTX cytotoxicity of human cervical cancer cells has been shown to involve inhibition the Raf-1 kinase activity. PTX inhibits mitosis by binding tubulin, a structural protein that is necessary for cell division, keeping tumor cells stuck in the G2 and M phases. PTX also appears to contribute to re-oxidation of hypoxic tumor cells [9].

Thus, it may function as radiation sensitizer, making it appropriate for use with RT [10]. In a phase II randomized trial comparing RT with concurrent weekly DDP or PTX in patients with LACC, Geara et al. did not find a significant advantage of PTX over DDP [11].

Due to additional cycle of neoadjuvant chemotherapy before CCRT, Miglieta et al. observed full complete clinical response rate and maintained local control [8]. It was assumed that high dose of PTX (175 mg/m2 every 3 weeks for four cycles) in chemotherapy regimen would contribute to favourable tumor regression in that study. Varghese et al. [14,15] presented relatively lower response rate of 88%, even with dose-dense concurrent chemotherapy regimen of cisplatin 30 mg/m2 and paclitaxel 40 mg/m2 for 4 weeks along with radiotherapy.

Though the authors considered no extra benefit with additional use of paclitaxel in the chemoradiation, we should notice that high rate of lost on follow-up might increase reporting biases in that study. Similarly, Ke et al. launched concurrent chemotherapy with weekly application of DDP (20 mg/m2) and taxotere (35 mg/m2) for 4-5 weeks combining with daily radiation therapy (total dose of 65-80 Gy).

All 34 patients finished two full TP courses with a full RT course. The median RT time in our study was 62 d, similar to the 63-d median reported by Miglietta et al. [8]. Adverse effects in our trial were generally tolerable and mild. Most concerning was Grade III bone marrow suppression in slightly more than a third of the cohort.

No grade IV hematotoxicity was observed. Although gastrointestinal tract reactions, vaginitis, proctitis, and cystitis were common, they were mild (grade I or II) in all cases. Ke et al.’s regime produced a 82.1% rate of myelosuppression (grade I, II, or III; no grade IV) [15]. A third of the patients in Miglietta et al.’s [8] study showed grade 3 or 4 hematological toxicity, whereas slightly more than three quarters of the patients in Sood et al.’s [17] study experienced grade III or IV acute hematological toxicity.

In conclusion, a CCRT regime of PTX plus DDP produced satisfactory short-term efficacy with relatively mild side effects. This study was limited by a small sample size and short follow up. Further observation of the safety and efficacy of this regime is needed to ascertain its long-term effects.