The goal of this work is to develop a Computer Aided diagnostic (CAD) algorithm for segmentation and feature extraction of Lung Region in Posterior Anterior (PA) chest radiograph (CXR) using different transforms. In our work, Segmentation of lung region is done by watershed Segmentation and feature extraction of the segmented lung region is done by five different transform methods the Multi resolution approach (MRA). The Performance of different MRA techniques like discrete cosine transforms (DCT), Discrete Wavelet Transform (DWT), Discrete Shearlet Transform (DST), Curvelet Transform (CT) and Bandlet Transform (BT) for feature extraction of the lung region in CXR is analyzed by using various statistical parameters. The performance evaluation of all this transform is done for 247 images in Japanese Scientific Research database (JSRT) database and bests of this method which give good Feature descriptor is analyzed.

The challenging task for lung segmentation in CXR is to trace the lung boundary accurately. The lung region extraction is difficult due to the presence of structures such as ribs, clavicles, mediastinum, and pulmonary blood vessels. Many algorithms have been developed to suppress the effect of these structures [1] and to extract only lung region to study its abnormality. Numbers of Segmentation algorithms are available in the literature. In our study, we consider one of the region based segmentation method, watershed segmentation with improvement in segmentation result by reducing oversampling.

The next important step in diagnosing the abnormality in the CXR is the extraction of feature set from the segmented image. In the CXR five different intensities are present, which distinguish the anatomical structures from one another. The normal lung region appears as a black intensity any abnormality in the lung region can be also identified by the change in the intensity level. This can be analyzed by first extracting the feature set of the lung region. Various methods are available for feature extraction in the spatial domain as well in frequency domain, but some features are easily distinguishable when we are using frequency domain techniques. In our work we consider various multiresolution approaches like DCT, DST, DWT, Curvelet, Bandelet for feature extraction in the lung region in CXR and the best of this technique for feature extraction is analyzed by using various statistical parameters.

Automating lung segmentation, feature extraction and classification using CAD in the chest radiograph is the challenging area of research going on for the past few decades. However, many algorithms have been developed for this issue still there is a possibility of false negative. Segmentation of chest radiograph is carried out such that there should be a less possibility of false negative. Segmentation algorithm should be developed such that it is fast, reliable and valuable organ identification. Usually the Segmentation results are very much valuable for the end results. If the organs are easily identified in an image by means of an automatic segmentation algorithm then it relieves radiologist in analyzing numerous X-ray images.

In our study we use JSRT database which consists of 247 digital CXR images in which 154 nodule and 93 non nodule images are available [15,16]. For the simulation, we use Matlab R2011a.

Our Work consists of four steps:

iv) Comparing the features extracted by the five different transform using four statistical parameters. The block diagram of the system is depicted in Figure 1. 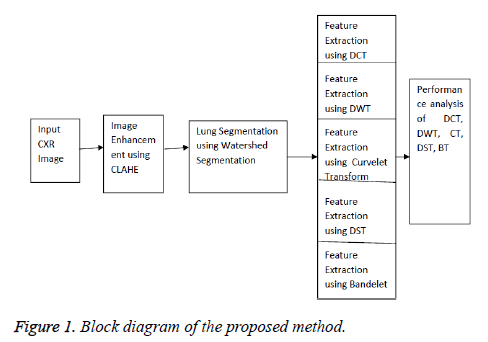 Contrast Limited Adaptive Histogram Equalization (CLAHE) enhances the image by partitioning the image into small region called tiles and operate on each tile. It mainly depends on two parameters block size and clip limit [17]. This method is very suitable for Medical image enhancement, so we are using it for CXR image enhancement. This method has limitations in amplification of noise and also concentrates mainly on the enhancement of borders, edges and the low contrast region.

Lung region segmentation in CXR is an important step for diagnosing abnormality in the lungs. Here we are using region based algorithms, Watershed Segmentation [18] with reduction in over segmentation.

DCT is similar to the Fourier transform except that it uses only real numbers to specify the coefficients. DCT uses only fewer co-efficient to approximate lines, but DCT is not well suited for non stationary signals. The Discrete cosine transform and it is given by equation (1).

Discrete wavelet transform represent images in the time-scale domain. Wavelet transform consists of small wavelets with finite duration. By use of wavelet transform the image can be differentiated in to different frequency components with respect to time. Like Fourier transform in DWT different wavelets can be used as a basis function for representing other functions. Wavelet is represented as Ψ(x) which is the representation of the mother Wavelet and it is given in Eq. (2)

Where a=2-j and b=k.2-j, k and j are integers. The sampling of Lung image depends upon the value of a and b. DWT is very much suitable for point singularities, but they are not suitable for analyzing the images with geometric feature with line and surface singularity. So the feature extracted by DWT is not good for curves/edges of the lung region of the CXR. DWT Transform is applied to the segmented lung region and its coefficients are analyzed using statistical parameters.

2. Smooth partioning: The decomposed image is smoothly partitioned by using the window function it is given by

Curvelet transform is applied to the segmented lung region and its coefficients are analysed using statistical parameters.

Discrete shearlet Transform is applied to the segmented lung portion and statistical parameters are calculated for shearlet coefficients.

Bandelet transform is a self adaptive multiresolution geometric analysis which has the special properties of strict sampling and adaptability which are very important for image representation which is not present in the other MGA. It utilizes overall geometric information from the image which is more important in identifying every distinctive feature in the image. When compared to contourlet and curvelet transform, it provides stable and efficient performance [14]. Bandelet transform divides the image into sub blocks in multidirection and in multiscale, from which bandelet coefficients are generated. Bandelete transform is applied to the segmented lung region in our work and the statistical parameters are calculated from the bandelet coefficients.

In our work, the CXR image is processed in four steps to extract the feature from the lung region (Figure 2a). The first step in our method is image enhancement using CLAHE which is shown in Figure 2b for sample CXR image from JSRT database, then Watershed Segmentation is applied to segment the lung region from the CXR image which is shown in Figure 2c., and the features are extracted using five different transform such as DCT, DWT, DCRT, Shearlet and Bandelet. The features extracted from this transform are analysed using various statistical parameters for both Lung nodule (Normal) and Non-nodule (abnormal) images. Here we consider four statistical Parameters like Mean, Median, Energy and Entrophy. The comparison of this parameters for various transform both for normal and abnormal image is given in Table 1. 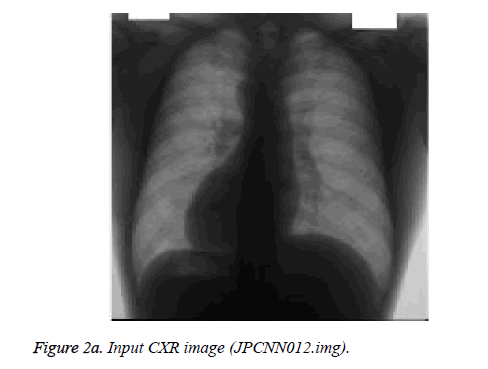 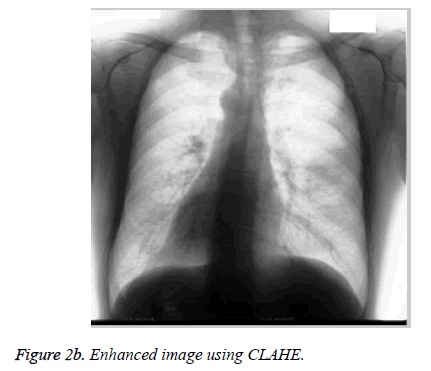 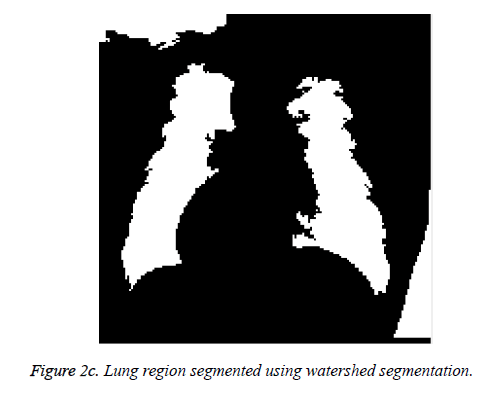 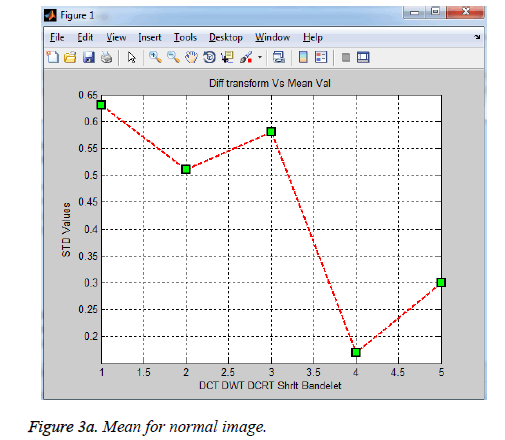 Figure 3a: Mean for normal image. 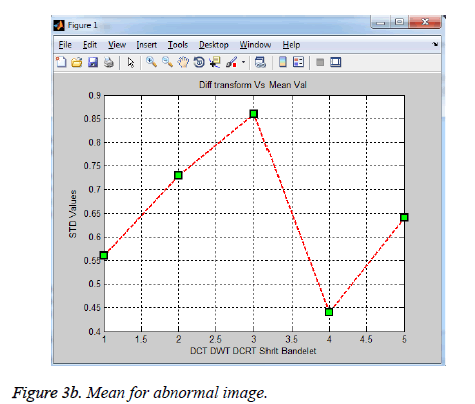 Figure 3b: Mean for abnormal image. 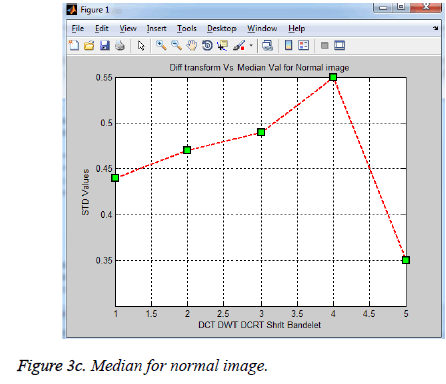 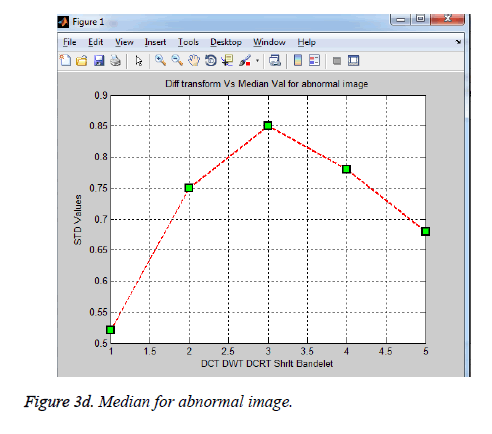 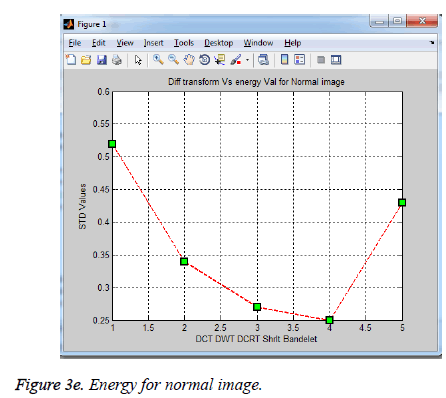 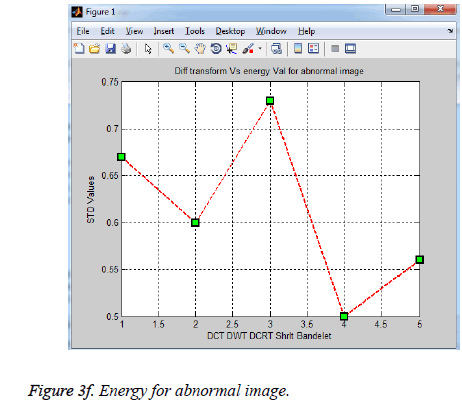 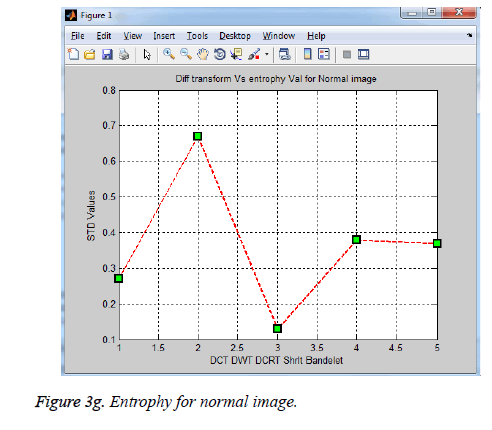 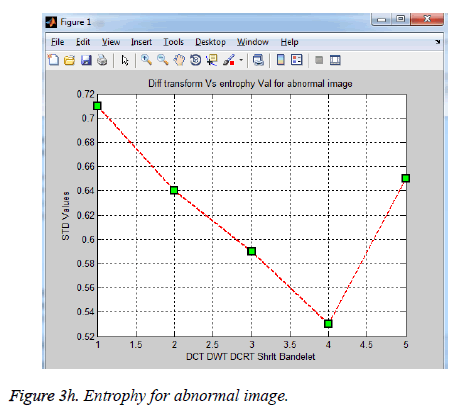 In analyzing this various parameters and comparing the result produced by the different transform we suggest that both curvelet and Bandlet transform provide the features with good discrimination between the normal and abnormal images.

CAD for automatic segmentation of Lung Region using Watershed Segmentation in CXR and feature extraction of the lung region using different transforms was developed. In our work we have extract the feature using DCT, DWT, DST, Curvelet and Bandelet Transform. The Feature extracted by this transforms are analyzed using the statistical parameters such as Mean, Median, Energy and Entropy. We have analyzed from the result of the Statistical Parameter for the various transform for Lung Nodule and Lung Non-Nodule image of the JSRT database, Curvelet and Bandelet Transform perform well. In our future work, we will use this transform for feature extraction of the Lung region for finding different abnormalities in the Lung Region.