Axial signs, including gait impairment, postural abnormalities and postural instability, are the most severe problems in patients with advanced Parkinson’s disease (PD) [1]. Axial signs usually occur when a patient’s attention is shifted or during a directional change, and they are responsible for falls as the upper body continues moving forward while the feet remain glued to the ground [2]. Axial signs are disabling phenomena that affect the autonomy and life quality of patients [3]. However, the efficacy of dopaminergic regulations and the standard Deep Brain Stimulation (DBS) on axial signs are not satisfactory and still remain controversial [4].

Due to the role in gait initiation, the modulation of Pedunculopontine Nucleus (PPN) activity by DBS has attracted a lot of concerns [5]. According to experiments on nonhuman primate model of PD, low-frequency PPN stimulation has improved movement counts, posture, and balance [6-8]. Other studies show that low-frequency PPN stimulation selectively improves gait dysfunction in patients with PD [9-11]. Bilateral stimulation of mid-lower PPN without co-stimulation of Subthalamic Nucleus (STN) is beneficial for PD patients who still have severe freezing of gait, postural instability, and falls even on medication [12].

Subthalamic DBS is a potential treatment of axial Parkinsonian symptoms [13-17]. It improves not only limb motor symptoms but also gait dysfunction in PD [18]. Hamani et al. have reported an improvement of 64% for gait and 69% for postural stability one year after STN DBS surgery [19]. Bejjani et al. also conclude that axial Parkinsonian symptoms can be improved by subthalamic stimulation at 6 months after surgery [20]. Subthalamic DBS improves posture and gait dysfunction by directly affecting PPN [18,21]. In addition, Khan et al. report that PPN and STN DBS synergistically alleviate axial signs of advanced PD patients [22]. The authors refer to the subthalamic target of stimulation as caudal Zona Incerta (cZI), which is the area immediately dorsal to STN [22]. Lower frequency cZI DBS leads to motor improvement with a similar magnitude as that by conventional high-frequency STN DBS [23]. Of note, the combination of PPN and subthalamic DBS seems to be superior to subthalamic stimulation alone when tested on medication [22]. However, some noteworthy exceptions still exist [11,24].

There have been some reports on partial improvements in gait dysfunction and postural instability with PPN stimulation [11,22,24-28], but the number of cases is still small. A recent study on ten PD patients shows that STN DBS improves axial symptoms by modulating PPN/mesencephalic locomotor region activity [29]. It is still controversial whether the optimal site for stimulation is situated in PPN or STN. In addition, it is also unclear whether the combination of PPN and subthalamic stimulation has superior effects than individual stimulation of either region. In the present study, we perform a meta-analysis to assess the overall efficacy of PPN DBS, subthalamic DBS and the combination of both in PD patients with motor and axial symptoms.

Literatures were carefully searched in databases including MEDLINE, PubMed, EMBASE, and Cochrane Library from the construction date of the databases to June 1, 2016, without any publication language limitation. The search terms included various combinations of “subthalamic”, “pedunculopontine”, “deep brain stimulation” and “Parkinson disease”. Additional studies were identified from reference lists in the studies identified by searches. Only published manuscripts were ultimately included in the analyses.

The following inclusion criteria were used: i) controlled clinical trials comparing subthalamic DBS with PPN DBS to treat idiopathic PD; ii) studies describing patients with severe response fluctuations or symptoms of falling, freezing of gait, or postural instability despite of optimal pharmacological treatments; iii) studies that used the Unified Parkinson’s Disease Rating Scale (UPDRS) to measure post-treatment results; iv) reports in which outcomes were measurable using continuous variables. Studies and patients were excluded according to the following exclusion criteria: i) the study was based on only a single DBS target; ii) DBS was performed in pathologies other than PD; iii) patients who had severe gait disorders despite of subthalamic DBS were implanted with PPN DBS electrodes; or iv) data could not be extracted.

Therapeutic outcomes of the included studies were evaluated using Unified Parkinson’s Disease Rating Scale III (UPDRSIII), which is a widely used clinical tool that assesses motor performance [30,31]. UPDRSIII has been demonstrated to be reliable and valid [32], and examines speech, facial expression, rigidity, finger taps, hand movements, ability to rise from a sitting position, gait, posture and postural stability, bradykinesia of the body, and action or postural tremors [30-32]. Axial UPDRSIII subscores computed in the present study included gait-related symptoms such as rising from chair, posture, gait and postural stability. Particular care was given when assessing motor and axial subscores, as well as the specific benefits of PPN versus subthalamic mediation.

Two investigators (D.C. and G.H.) independently examined the titles, abstracts, and references of all identified articles. In case of any disagreement between the two investigators, the decision was made after thorough discussion with another investigator (K.D.). The two investigators (D.C. and G.H.) independently applied the inclusion and exclusion criteria, selected the studies, and extracted data and outcomes. The following data were extracted from each article: i) the number of patients in the study; ii) details of treatment regimens; iii) patient characteristics; and iv) outcome measures. Most studies provided means and Standard Deviations (SDs) of pre- and postoperative results, and reported differences between the values. If these values were not explicitly reported, we determined them by extracting baseline means and subtracting them from outcome means. To obtain SD changes from baseline, we used the equation in the Chinese translation of Cochrane Handbook for Systematic Reviews of Interventions (version 3.0.2, chapter 7.7.3.3 and 16.1.3.2).

The quality of each study was independently assessed by the two investigators mentioned above (D.C. and G.H.). Controlled clinical trials that compared subthalamic DBS with PPN DBS in the treatment of idiopathic PD, excluding self-controlled pilot studies, were assessed using the “assessing risk of bias” tables provided in the Chinese translation of Cochrane Handbook for Systematic Reviews of Interventions (version 3.0.2). Disagreements between the two investigators were resolved by another investigator (K.D.).

Characteristics of the included studies

A total of 230 articles were initially searched. After excluding duplications, case reports, editorials, comments, laboratory studies, and other irrelevant literatures, 34 studies were preliminarily chosen. According to the inclusion and exclusion criteria, another 17 studies were excluded. Then, the remaining 17 studies were subjected to detailed evaluation, and 13 studies were excluded because of the same group of patients, inappropriate scoring criteria or non-extractable data. In addition, controlled clinical trial [33] had a high risk of bias (patients were not randomized in retrospective study) based on the “assessing risk of bias” table in the Cochrane Handbook for Systematic Reviews of Interventions, and was excluded because patients in the PPN DBS group exhibited significantly more DOPA-resistant gait disorders compared to STN DBS group (Figure 1). Finally, our meta-analysis included 3 articles, which reported a total of 15 patients suffering from gait dysfunction in spite of receiving of pharmacotherapy [11,22,24]. The studies did not specify experimental and control groups. Subthalamic DBS was more widely used than PPN DBS or combined PPN-subthalamic DBS. Therefore, we considered subthalamic DBS as control group and PPN DBS and combined PPN-subthalamic stimulation as experimental groups. DBS surgery was performed according to standard protocols, in which the final electrode position was verified by brain magnetic resonance imaging or computed tomography. Therapeutic outcomes were evaluated by using various scales, including the total scores of UPDRSIII and the axial subscores derived from items 27 to 30. MDs were determined by subtracting baseline means from outcome means. Higher UPDRSIII scores corresponded to more severe PD. Demographic characteristics of participants were not significantly different among studies (Table 1).

Table 1. Details of studies included in the meta-analysis. 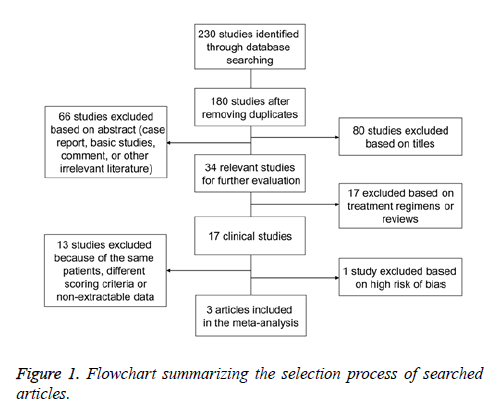 Figure 2: Forest plots of comparison between PPN DBS and subthalamic DBS for mean difference in UPDRSIII score change and 95% CI in (A) on-medication phase and (B) off-medication phase. 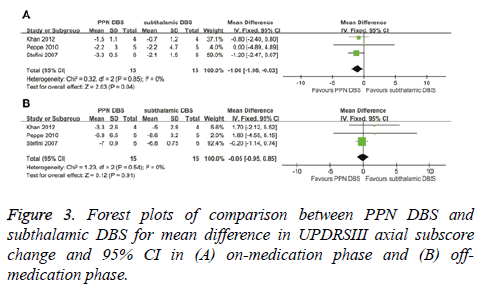 Figure 3: Forest plots of comparison between PPN DBS and subthalamic DBS for mean difference in UPDRSIII axial subscore change and 95% CI in (A) on-medication phase and (B) offmedication phase. 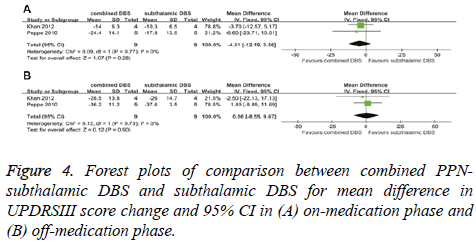 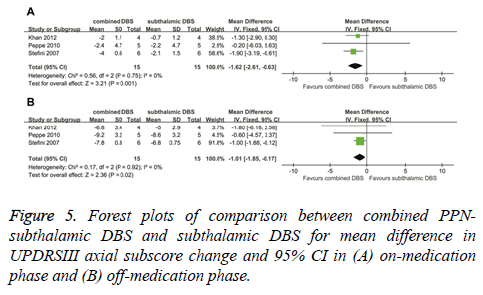 Symptoms of PD include the classic Parkinsonian triad (tremor, bradykinesia, and rigidity associated with dopaminergic denervation), axial Parkinsonian symptoms associated with nondopaminergic transmission (postural instability, impairments of gait, and posture), and nonmotor symptoms [34,35]. Motor control is the major goal of treatment for PD patients. Patients in on-medication state show similar improvements in UPDRSIII after PPN or STN DBS (n=9; overall pooled MD outcome value, 4.53; P=0.19). A potential explanation may be that a small sample size has been used. In off-medication phase, improvement of UPDRSIII score after subthalamic DBS is greater than that after PPN DBS. Being consistent with previous studies [9,10,36], PPN DBS does not lead to significant motor improvement when used alone. The effect of PPN DBS on Parkinsonian symptoms is much less clear.

In the present meta-analysis, we have observed significant differences between PPN and subthalamic DBS regarding improvements in UPDRSIII axial subscores in the onmedication phase. PPN has been a DBS target due to failure of globus pallidus internus [37], ventral intermediate thalamic nucleus (Vim) [38] and subthalamic DBS [39] in improving freezing of gait and gait disorders. Interestingly, dopamineresistant gait disorders can be mildly improved by STN DBS at low frequency, whereas reduced STN DBS frequency can worsen dopamine-sensitive motor symptoms in certain patients [23]. From a clinical point of view, low-frequency STN DBS cannot be used as an alternative to high-frequency STN DBS. Several reports [9-11] have shown that low-frequency PPN stimulation in patients with PD appears to selectively improve freezing of gait, postural instability and falls. Indications for PPN stimulation are severe FOG, postural instability, and falls that persist even when the patient is on medication [12]. However, these results have not been reproduced in three double-blind randomized controlled studies [9,10,33]. One of the significant differences in surgical techniques between these two groups of studies is the use of bilateral PPN stimulation in the studies included in our meta-analysis and unilateral PPN stimulation in one of the control studies [10]. In one of the double-blind randomized controlled studies [9], PPN DBS electrodes are implanted into six patients who have severe gait disorders after subthalamic DBS surgery. One study [33] shows that patients in PPN DBS group have exhibited significantly more DOPA-resistant gait disorders than STN DBS group. However, patients with bilateral STN and PPN DBS placement in different surgeries and owing to different criteria have been excluded from the present meta-analysis because of high risk of selection bias.

The present meta-analysis still has some limitations. One study lacks detailed data on UPDRSIII score changes [11]. UPDRS “gait” item is not the main outcome indicator. Particular inclusion and exclusion criteria can be limiting factors, and it will be more convincing if studies included in our metaanalysis are randomized controlled trials. There are also potential issues in using UPDRSIII scores and axial UPDRSIII subscores as primary measures to compare PPN DBS, subthalamic DBS and combined DBS. UPDRS motor function scores may have several PD-related problems [31]. One study [11] included in the present meta-analysis contains much smaller standard deviations than the other two studies, and may lead to bias.

In conclusion, our meta-analysis shows differences between PPN and subthalamic DBS on outcomes of motor function based on UPDRSIII (off-medication phase) and axial motor features based on axial UPDRSIII subscores (on-medication phase). PPN is proven as a better treatment target for gait disorders in PD than STN in the on-medication phase. Subthalamic DBS has similar effect for postoperative motor features compared with combined PPN-subthalamic stimulation. Alternatively, combined DBS is more effective in treating axial symptoms of PD than STN DBS, based on axial UPDRSIII subscores (on- and off-medication phases). Considering the limitations described above, further evaluation and long-term observations in larger controlled trials are needed in order to determine the efficacy of PPN DBS and combined PPN-subthalamic stimulation. The present study provides a basis for selecting treatment methods for Parkinsonian motor and axial symptoms.