Cervical cancer (CC) is the third most prevalent malignant tumor in women [1] and the most common gynecologic malignancy. Approximately 500,000 new cases and 250,000 deaths from CC occur each year [1]. Continuous infection with high-risk HPV (HR-HPV) is the main cause of cervical precancerous lesions and invasive cervical cancer [2]. At least 15 HPV genotypes (HPV16, 18, 31, 33, 35, 39, 45, 51, 52, 56, 58, 59, 68, 73, and 82) have been identified as HR-HPV [3], among which HPV16 exhibits the closest relationship with CC, followed by HPV18 [4]. Currently, HPV vaccines are applied worldwide mainly for HPV16/18 and HPV 6/11/16/18 [5]. However, in different geographic regions and populations, the distributions of HPV subtypes are different [6]. In northeast China, the most common HPV genotypes are HPV-16 (28%), HPV-58 (14%), and HPV-52 (14%), and HPV-18 accounts for only 8% [7,8]. In western China, the most common HPV genotypes are HPV-16, HPV-33, and HPV-58 [9]. In Southeastern China, the most common genotypes are HPV-52, HPV-16, and HPV-58 [10]. Vaccines against HPV16/18 have limited effects on other HR-HPV infections [11]. Thus, an effective vaccine should contain the HPV subtypes with the highest local prevalence. Here, we detected the infection rates of HPV16/18 and other HR-HPV subtypes in cervical precancerous lesions and CC to explore the most common and highly carcinogenic HPV types in CC. Our results provide a basis for CC vaccine development and pre-judgment of cervical diseases by gynecologists in China.

Cervical exfoliated cells sampled from 490 CIN or CC patients, histologically diagnosed by cervical biopsy or cervical conization in the First Affiliated Hospital of Wenzhou Medical University from June 2015 to February 2016, were selected as study subjects, including 125 cases of CIN1, 231 cases of CIN2-3 (group CIN2+), and 134 cases of CC. No patients had a history of HPV vaccination. This study was conducted in accordance with the declaration of Helsinki. This study was conducted with approval from the Ethics Committee of Wenzhou Medical University. Written informed consent was obtained from all participants.

The tissue sections were subjected the hematoxylin-eosin staining and then diagnosed by two experienced pathologists in our hospital based on WHO classification. The diagnosis was further confirmed after review. When results of cervical biopsy and cervical conization were inconsistent, results showing a higher histological grade were considered for the final diagnosis.

Note: 1. The positive rate of different types in the patients with multiple infections were repeatedly calculated. 2. **P<0.001,*P<0.05. 3. a: Pearson χ2, b: successively corrected  χ2, c: P obtained by Fisher exact statistics; when the positive rate of one group was 0, no statistical process was performed.

Note: 1. The positive rate of different types in the patients with multiple infections were repeatedly calculated. 2. **P<0.001,*P<0.05. 3. a: Pearson χ2, b: successively corrected χ2, c: P obtained by Fisher exact statistics; when the positive rate of one group was 0, no statistical process was performed.

Comparison of simple- and multiple-infection and negative rates 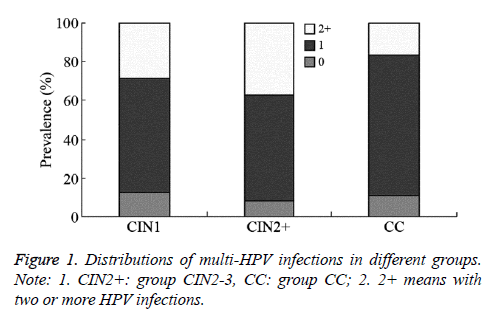 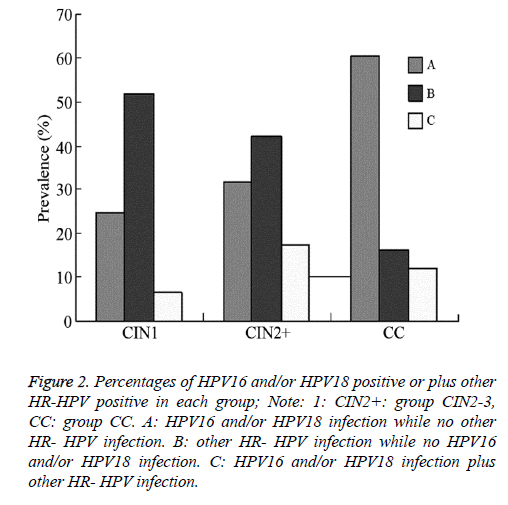 The occurrence and development of CC involves quantitative and qualitative changes, from gradual changes to mutations, and progresses from of CIN- carcinoma in situ to early invasive cancer and then invasive cancer. CIN often occurs in women aged 25-35 years, and the highest CC incidence occurs at 40-54 years [12]. In this study, the average age of CIN patients was approximately 44 years, whereas that of CC patients was about 52 years. The average age of CC patients was higher than that of other patients; therefore, CC screening in this region should be increased for early detection and timely treatment. Persistent infection of HR-HPV is necessary for the occurrence and development of CIN and CC [13]. HPV genotyping detection is the only method to identify persistent HPV infection in females. Because there are various HPV types that show differing carcinogenic potencies, improving HR-HPV genotyping detection in women in the high-risk CC age range may be an effective means for CC screening and CIN follow-up in obstetrics and gynecology.

A recent prospective study proposed seven HPV subtypes (HPV16, 18, 31, 33, 35, 52, and 58) as high risk factors for the progression of cervical lesions [21]. This study found that compared with CIN2+, CC showed a higher positive rate of HPV16, supporting that continuous HPV16 infection increases carcinogenicity. In contrast, we found that CC had lower positive rates of HPV33, HPV52, and HPV58 than that of CIN2+, indicating that when CIN progresses to CC, HPV33, HPV52, and HPV58 show low carcinogenicity. We observed an increased simple HPV infection rate from CIN to CC lesions; however, multiple infection rates decreased, which does not support the view that multiple infections are associated with the severity of cervical lesions. In contrast, a single infection appears to be associated with the severity of cervical lesions, as described by Hou et al. [22]. This shows that multiple infections have lower carcinogenicity than single infection.

This study showed that group CC included a larger number of simple HPV16- and/or HPV18-infected patients than group CIN1 and CIN2+; however, the number of patients with other HR-HPV infections was lower, indicating that HPV16/18 have higher carcinogenicity than other HR-HPV subtypes during the development from CIN to CC. Some studies have proposed that cervical diseases associated with HPV16 infection subside with more difficultly than when combined with other HR-HPV infections [23]. In summary, persistent infection with HPV16/18 is the most important predisposition factor in CC; therefore, these subtypes have important clinical significance. HPV33, HPV52, and HPV58 are also high-risk subtypes in cervical precancerous lesions and CC; however, compared with HPV16/18, HPV33, HPV52, and HPV58 show lower carcinogenicity. The sample size in this study was small. Large-sample multi-center studies are required in the future that should focus on polymorphisms in regional HPV33, HPV52, and HPV58. Moreover, whether HPV16/18 vaccines show better protection against simultaneous infection with HPV33, HPV52, and HPV58 should be determined.