Comparison of HPV testing by real-time fluorescent PCR and hc2 for detection of high-grade cervical intraepithelial neoplasia and cancer: a case-control study in high-risk patients

Introduction: HPV testing is more sensitive than cytology for cervical cancer screening but leads to over referral to colposcopy. This study was designed to evaluate the correlation of development of high-grade cervical intraepithelial neoplasia and cancer with HPV infection tested by real-time fluorescent polymerase chain reaction and conventional hc2 respectively and to find a cut-off value of HPV tests to increase the specificity of HPV testing and facilitate the triage before colposcopy.

Conclusion: Real-time fluorescent polymerase chain reaction HPV detection method has better specificity and positive predictive value than conventional hc2. There is no optimal cut-off value of HPV viral load by hc2 to predict the development of cervical lesions. Patients with positive HPV 16/18 and high-level viral load by RT-PCR test have more risk to develop high-grade cervical lesions and carcinoma. Screening specificity is increased when taking these two cut-offs as the criteria to triage before colposcopy.

number of clinical trials have proved that HPV DNA testing is more sensitive but less specific than cytology, with greater reproducibility [1] and better negative predictive value against cervical precancer and cancer [1,2]. In the year 2012, American Cancer Society-American Society for Colposcopy and Cervical Pathology-American Society for Clinical Pathology (ACS-ASCCP-ASCP) introduced HPV testing in the cervical cancer screening guideline as cotesting strategy for women 30-65 y of age with a 5 y interval [3]. U.S. Preventive Services Task Force (USPSTF) made the same recommendation in the latest released statement [4] after the publication of POBASCAM randomised controlled trial [5]. Hybrid Capture 2 (hc2) is approved in the USA by the Food and Drug Administration (FDA) for primary screening. Other candidate HPV testing technologies should have a clinical sensitivity not less than 90% and specificity not less than 98% of the hc2 for cervical intraepithelial neoplasia grade 2 or 3 and treatable cancer (≥ CIN 2) in women of at least 30 y [6]. Subsequently, in 2015, ASCCP and the Society of Gynecologic Oncology (SGO) published interim guidance for the use of HPV testing for cervical cancer primary screening [7]. In 2016, it was considered as an alternative modality to cotesting for women 25 years and older in practice bulletin from the American College of Obstetricians and Gynecology (ACOG) [8]. Advanced HPV diagnosis provides important estimates of the prevalence of cytologic abnormalities, hrHPV positivity, and CIN2 or greater [9].

Multiple researches have proved that HPV testing is of optimal sensitivity, reproducibility and predictive value in primary screening [9-14]. However, it elevates the chance of over referral to colposcopy as overtreatment, which is considered as the primary measure of harm outcome of screening. This study was designed to evaluate the correlation of high-grade cervical intraepithelial neoplasia and cancer with HPV infection tested by real-time fluorescent polymerase chain reaction and conventional hc2 respectively and to find a cut-off value of HPV tests to increase the specificity of HPV testing and facilitate the triage before colposcopy.

Histopathology was taken as the diagnostic gold standard. We use 2-tiered terminology, i.e. Low Grade Squamous Intraepithelial Lesion (LSIL) and High Grade Squamous Intraepithelial Lesion (HSIL) instead of 3-tiered CIN system. CIN2 with P16 positive equals to HSIL, presupposing to have increased cancer risk. CIN2 with P16 negative equals to LSIL [15]. In this study, HSIL and cervical cancer were defined as pathology positive. LSIL and normal pathological result were defined as pathology negative.

Univariate ANOVA and multivariate binary logistic regression analysis were used to analyse the correlation of cervical abnormalities with HPV infection by SPSS version 23.0. Values of p<0.05 were considered statistically significant.

This study was approved by the Ethical Committee of People’s Liberation Army General Hospital. Written informed consent was obtained from each patient.

There were 623 samples tested by hc2 technique and 969 cases by RT-PCR technique, 493 samples were tested by both realtime fluorescent PCR and hc2. HPV positive rate had no significant difference among the four age groups by hc2 (P>0.05) while by RT-PCT testing P<0.05 (Table 1).

Table 1. HPV testing by hc2 and RT-PCR techniques in several of age groups.

Correlation analysis of HPV infection by hc2 and cervical lesions 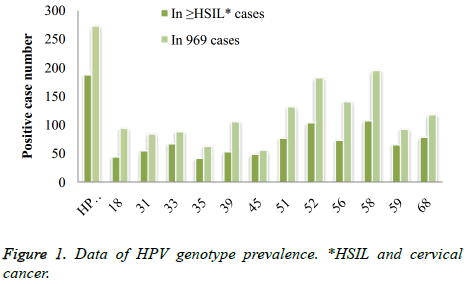 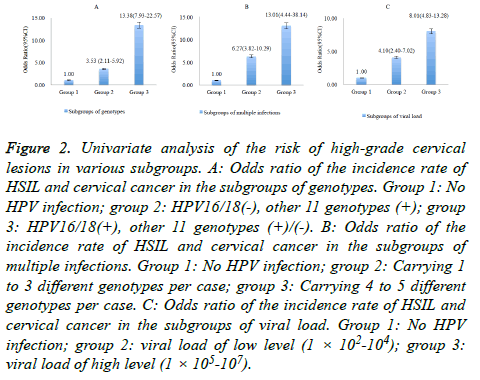 Genotypes, multiple infections and viral load were involved in the binary logistic regression analysis (Table 2). The genotypes and viral load are two independent risk factors of the development of HSIL and cervical cancer (P<0.05). Number of genotypes carried by one patient had not statistical influence on high-grade cervical lesions development and was excluded from multivariate logistic analysis (P>0.05). There was significant positive relationship between HPV 16/18 exposure and the development of high-grade cervical lesions, with 8.5 fold increase in the risk (OR=8.48, 95% CI: 4.82-14.92). It was 2.2 fold increase in the risk with other 11 genotypes exposure (OR=2.24, 95% CI: 1.27-3.94). Regarding viral load, the OR of high-level group was 1.98 (95% CI: 1.43-2.74).

HPV prevalence in cervical cancer is 99.7% worldwide [16]. HPV genotyping and viral load measurement are critical to cervical lesions detection and follow-up visit. Approximately 15 genotypes of HPV, including the 13 subtypes tested in this study, have varying carcinogenic risk and HPV tests are required to be analytically and clinically validated with proven acceptable reproducibility, clinical sensitivity, specificity and positive and negative predictive values for cervical cancer and verified precancer [6,17]. Inappropriate cut-off of HPV positive may lead to overtreatment, i.e. over referral of “virtually no risk” patients to biopsy under colposcopy. The high false positive rate is inevitably derived from high sensitivity of HPV tests and the carcinogenicity mechanism of the virus. It was traded off in population-based study, where the majority of participants were HPV negative. In this study, HSIL and cervical cancer were set as clinical end point in our research seeking the optimal cut-off of HPV positive to predict cervical lesions. HPV tests were validated by pathology result in high-risk patients defined by contesting and found that more than 60% of participants were histological negative and LSIL. The false positive rate was 82.5% of hc2 and 71.4% of RTPCR, respectively.

Regarding multiple infections, our result showed significantly high risk of high-grade disease development, which is consistent with Schmitt et al. [22]. In multivariate analysis, it has not statistical influence on cervical lesion development. Studies with large sample size are still required for further investigation.

The correlation of viral load by hc2 and cervical lesions grade was weak and lack of a dose response, which is consistent with Gravitt et al. [23] but is converse with Kang et al. [24] who concluded that the severity of cervical lesions increased with the increasing viral load. Through RT-PCR testing of HPV, high-level of viral load is the other independent risk factor of high-grade cervical lesions and cancer. We take 1 × 105 as the cut-off value to divide the viral load into high and low level. Patients with high-level of viral load have more risk to develop high-grade cervical lesions and cancer by univariate and multivariate analysis. The trend was also observed in HPV 16/18 and in HPV 16, consistent with Wu et al. [25]. Above all, it is logically presuppose that HPV testing by RT-PCR can be applied in cervical cancer screening for triage before colposcopy through genotyping and viral load measurement. In accordance with the multivariate analysis formula, genotype has more effect on disease development than viral load.

The majority of HPV infections are cleared by the immune system within 2 y [26] and if the viral gene is integrated into the host cell and express the early oncogenic protein E6 and E7 will significantly increase the risk of cervical lesions [27]. However, it is difficult to tell when the viral gene will integrate into the host cell and to discriminate between regressive and progressive infections using the DNA testing technologies. E6/E7 mRNA testing could be useful to supply evidence of progressive infection and shows relatively high specificity. However, the sensitivity is low although the application of E6/E7 mRNA testing for HPV may lead to a low referral to colposcopy [28]. It cannot substitute DNA-based technologies in cervical cancer screening.

In conclusions, real-time fluorescent polymerase chain reaction HPV detection method has better specificity and positive predictive value than conventional hc2. There is no optimal cut-off value of HPV viral load by hc2 to predict the development of cervical lesions. Patients with positive HPV 16/18 and high-level viral load by RT-PCR test have more risk to develop HSIL and carcinoma. Screening specificity is increased when taking these two cut-offs as the criteria to triage before colposcopy.

The authors declare no conflict of interest for this article. The Liferiver™ Company has no role in writing of this study, or in making any decision to the submission.

This study was supported by a grant from the National Natural Science Foundation of China (81571411).