Aim: This is a retrospective cohort study of patients who were treated with different regimens of adjuvant chemotherapy after cholecystectomy due to Gall Bladder Cancer (GBC).

Patients and Methods: Data of GBC Patients registered between January 2011 to January 2015 at Mahavir Cancer Sansthan treated with 5-FU plus Cisplatin and Gemcitabine plus Cisplatin as adjuvant chemotherapy were reviewed retrospectively. Eighty patients were enrolled and data was analysed for overall survival and progression free survival. Causality, preventability and severity of Adverse Drug Reactions (ADRs) were also evaluated.

Conclusion: Direct comparison of 5FU-Cis and Gem-Cis showed the latter regimen was superior in OS and PFS. Further prospective studies which define the efficacy and toxicity of these regimens are recommended.

Gall bladder cancer, one of the most common biliary tract cancers, is a lethal malignancy and its incidence varies in accordance to various ethnic groups and geographical conditions [1,2]. In India, north and north eastern states like Uttar Pradesh, Bihar, Orissa, West Bengal and Assam has one of the highest reported incidence of Gallbladder Cancer (GBC) in the world [3,4]. Gall stones are considered as one of the most important risk factor for GBC followed by obesity [5]. Presence of high arsenic content in the Gangetic-Zone is another risk factor [6]. This study was conducted in Bihar which is one of the arsenic hot spots in India. Districts of Bihar which are close to Gangetic-Zone may contribute more GBC patients. Other risk factors include porcelain gall bladder (gall bladder covered with calcium deposits), older age (after the age of 45 years there is an increase in incidence of GBC and reaches maximum at the age of 65 years), gall bladder polyps [7] primary sclerosing cholangitis [8], typhoid disease and family history [1]. Women are two times more vulnerable than men and in north Indian cities; GBC is the leading digestive cancer in women [1].

GBC is usually found in its advanced stage as the symptoms are indistinct and are comparable to diseases like cholelithiasis and cholecystitis. One out of five gall bladder cancers are detected at early stages. Patients with advanced GBC have a mean survival rate of 6 months [1]. In advanced/unresectable GBC, cancer cells have invaded distant tissues or they are in such a place where it is too difficult to be removed entirely by surgery [5]. In resectable GBC, surgery is done and adjuvant chemotherapy is given. The main drugs used in the treatment of biliary tract cancer including GBC are Fluoropyrimidines (5-FU), Gemcitabine and Platinum compounds [9]. 5FU plus cisplatin combination is preferred as first line drug by patients in developing countries like India because of their low price compared to other newly introduced drug regimens.

As we have very limited data in the adjuvant chemotherapy of GBC, it has become customary to extrapolate the data available from the studies of neo-adjuvant chemotherapy in advanced GBC and other advanced biliary tract cancers. Here in this study, we are analysing the outcome of 5-FU plus Cisplatin and Gemcitabine plus Cisplatin combination regimens when they are given as adjuvant chemotherapy. The National Comprehensive Cancer Network guidelines suggest fluoropyrimidine or Gemcitabine chemotherapy in patients with>T1N0 gallbladder cancer following curative surgery [10]. So this study was initiated with such an intention to provide the outcome of these drug regimens exclusively on GBC patients. More than that, we lack the data of effect of these regimens on Indian population with GBC.

This study was conducted at Mahavir Cancer Sansthan, Patna, India and was approved by Mahavir Institutional Ethics Committee. The retrospective data of confirmed GBC patients were collected during the period January 2011 to January 2015.

Male and female patients, >18 years of age, had biopsy or fine needle aspiration cytology–proven GBC and received 5-FU plus Cisplatin or Gemcitabine plus Cisplatin as first line adjuvant chemotherapy were included in the study.

Patients who didn’t complete prescribed chemotherapy cycles or received neo-adjuvant chemotherapy/chemo-radiation as adjuvant therapy were excluded from the study. Patients with co-morbid conditions such as diabetes mellitus, cardiovascular diseases and psychological problems were also excluded from the study. Only the data of eligible patients were considered for evaluation.

In 5-FU plus Cisplatin combination, Inj. 5FU 1000 mg/m2 and Cisplatin 50 mg/m2 were administered on day 1 and 2 of each cycle. In the Gemcitabine plus Cisplatin regimen, each cycle comprised cisplatin 25 mg/m2 followed by gemcitabine 1000 mg/m2, each administered on days 1 and 8 every 3 weeks. Patients received treatment cycles at an interval of 21 days provided that he/she has recovered from any drug related toxicity associated with the previous one. Adverse Drug Reactions (ADRs) of 5-FU plus Cisplatin and Gemcitabine plus Cisplatin were assessed by different standardized scales. The severity of ADR was assessed by Modified Hartwig and Siegel scale [11]. The reported ADRs were categorized into mild, moderate and severe. Based on Modified Schumock and Thornton scale, ADRs were categorized into definitely preventable, probably preventable and not preventable [12].

Evaluation of safety revealed that there exists an association between drug regimen and ADRs (statistically significant P=0.04). Both the drug regimens had their devastating effect on the haematological system with Gem-Cis regimen being a little innocuous (50%). Anaemia and thrombocytopenia shown by these two regimens are statistically significant. 5-FU-Cis regimen is hegemonic in all the evaluated systems of body. All the details are mentioned in Table 2. Incidence of ADRs in 5- FU-C is regimen was 62.5% and that of Gem-Cis was 40% (Table 3). Severity measurement of regimens indicated that majority of ADRs reported by 5-FU-Cis were severe (80%). Modified Schumock and Thornton scale reported that “Not Preventable” ADRs were dominantly shown by both of these regimens. According to WHO-UMC Causality assessment scale, 80% of the ADRs were “Certain” in 5-FU-Cis regimen but only Probable ADRs were reported with “Gem-Cis”. Figures 1 and 2 depict the above mentioned data. 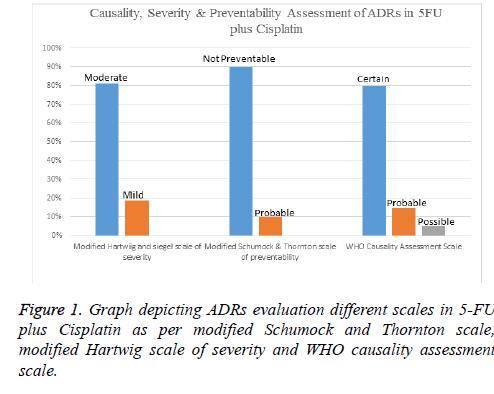 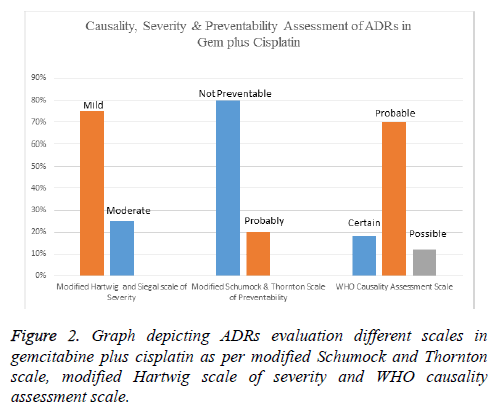 5-FU and Gemcitabine are antimetabolites whereas cisplatin belongs to platinum complex. 5-FU inhibits thymidylate synthase and selective failure of DNA synthesis occurs due to non-availability of thymidylate [14]. It is mainly used for the treatment of solid tumors like breast, colon, urinary bladder and liver. It is used topically in cutaneous basal cell carcinoma. It exerts primary toxicity on gastrointestinal system and bone marrow. To control cytotoxic drug induced vomiting, Ondansetron, a 5-HT3 antagonist, is used [15]. Gemcitabine is a pro-drug. Once it is transported into the cell, it is phosphorylated by deoxycytidine kinase to an active form.

Both gemcitabine diphosphate and gemcitabine triphosphate inhibit processes required for DNA synthesis [16]. Cisplatin, on the other hand causes cross linking of DNA. It is effective in metastatic testicular and ovarian carcinoma. It is also widely used in many solid tumors like lung, bladder, gastric hepatic, esophageal, head and neck carcinomas. Cisplatin is one of the highly emetic drugs and its most important toxicity is renal impairment. Antiemetics are priorly administered before infusing it. Amifostine, which is an organic thiophosphate, is specifically used for the prophylaxis of Cisplatin induced nephrotoxicity [17]. This study is done exclusively on GBC patients and the results from this study may help the physicians while choosing treatment regimens for their patients. 5-FU plus Cisplatin is economical compared to other newly introduced drug combinations like Gemcitabine plus Cisplatin and Gemcitabine plus Oxaliplatin. This study shall help the physicians to weigh the pros and cons of regimen and take the best step forward.

In our study, majority of the patients were females. So this study supports female gender as a risk factor for gall bladder cancer which is mentioned in the National Cancer Register Programme [18]. Maximum patients were from Patna followed by Siwan, India which strengthens that there is high prevalence of GBC in the population along the Gangetic basin and high arsenic concentration in drinking water may be a cause [19,20]. In this study, obesity contrasts as a risk factor as most of the patients had normal BMI.

As far as risk is concerned, maximum ADRs were reported in the haematological system followed by gastrointestinal system by both of the regimens which is similar to the study conducted by Smita et al. [21]. According to Modified Hartwig and Siegal Scale, most of the ADRs were moderate (81%) and mild (19%) by 5FU-Cis and this is in contrast to the study conducted by Suriendran et al. [22] where moderate ADRs were low, mild ADRs were 80% and no severe ADRs. But Gem-Cis regimen reported more mild ADRs. WHO-UMC and Modified Schumock and Thornton scales assessment in both of the regimen revealed that Gem-Cis regimen showed more “Probable” ADRs and in both of the regimens’ ADRs were in “Not Preventable” section. To our knowledge, it is the first study that compares the Severity, Causality and Preventability of ADRs of two regimens with these scales.

The results of our study found a better efficacy for Gem-Cis regimen in terms of OS and PFS. Median OS for Gem-Cis was 11.2 months which is somewhat different from the study conducted by Adina et al. [9,23] where OS was 9.1 months. The median OS in 5FU-Cis regimen was 10.3 months in the same study but in our study median OS was reported to be 8.1 months. Adina et al. conducted study which was on unresectable/locally advanced GBC. So comparison of efficacy of both the drugs is not exclusively correct. Median OS of Gem-Cis was similar to a study conducted by Valle et al. [24] where it was observed as 11.7 months. Median PFS of both the regimens were different from other studies. PFS for Gem-Cis in the study of Valle et al was 8 months but in our study it was 7.1 months. Valle also conducted study on unresectable GBC patients. There were other studies also comparing these regimens but they were done on unresectable GBC patients [25].

This study was supported by grants from the National Institute of Pharmaceutical Education and Research (NIPER), Hajipur under the aegis of Department of Pharmaceutical, Ministry of Chemicals and Fertilizers, Government of India, New Delhi, India.

The authors have no conflicts of interest to declare.