Background: The purpose of the present study was to compare the mid-term clinical outcomes of MAT and meniscectomy.

Methods: Between July 2006 and December 2010, 20 patients receiving meniscus allograft transplantation were enrolled. The IKDC score, Lysholm score, Tegner score and VAS score were compared between the two groups. X-ray and MRI were used to evaluate the degree of knee joint degeneration and the chondral lesions.

The meniscus is an important structure for knee joint function and plays significant roles in pressure bearing and distribution, shock absorption, stability enhancement, and joint lubrication [1]. In the past, the routine treatment for meniscal tears was meniscectomy because the meniscus was considered as a poorly functioning tissue [2]. Although total or subtotal meniscectomy was able to retain the integrity of partiallyinjured menisci, it still would cause some side effects. Total or subtotal meniscectomy could increase the stress to articular cartilage and injury risk as well as the occurrence of knee osteoarthritis. About 70% of injured knees will develop into articular cartilage injury and arthritis at 28 months to 10 years after surgery [3,4]. The reason could be its poor blood supply. The capillary vessel only exists in some areas of the peripheral region. The peripheral region, blending region and central region have complete, partial and no self-healing capability, respectively [5]. Moreover, medial menisci bear 50% stress from medial compartment, and lateral menisci bear 70% of stress from lateral compartment. If 20% of meniscus is resected, the stress to articular cartilage could increase by 35% [6,7]. Owing to its important function, meniscal repair is the preferred over total meniscectomy [8].

Since its discovery in early 1990s, Meniscus Allograft Transplantation (MAT) has been extensively applied in clinic with satisfying achievements, especially for relieving joint pain [9-11]. These studies mainly focused on the MAT-treated patients but did not compare MAT with meniscectomy. There is no study about the protection effect of MAT on articular cartilage. Thus, our purpose was to compare the mid-term clinical outcomes between MAT and meniscectomy.

The patients treated at the Department of Bone Joint and Traumatology of our hospital between July 2006 and December 2010 were included. Twenty patients underwent meniscectomy and 2 MATs (MAT group). Twenty six patients in the control group only received meniscectomy (Figure 1). In the MAT group, twelve patients were had pain and/or swelling on the injured knee joints after average 35 moths and received meniscus transplantation. The other 10 patients received meniscus transplantation during meniscectomy. The control group only intraoperatively received total meniscectomy according to the judgment of preoperative symptoms, Magnetic Resonance Imaging (MRI) and identification. The study protocol was approved by the local Ethics Committee of the First Hospital of Changsha and was performed in accordance with the ethical standards in the 1964 Declaration of Helsinki. Informed consent was obtained from all participants. 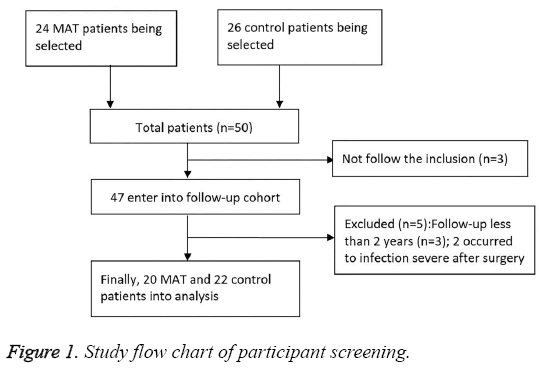 Criteria for inclusion and exclusion

The inclusion criteria were: (1) normal or correctable alignment of joints (≤ ± 3˚); (2) less than fifty years old; (3) favourable or intraoperatively corrected joint stability; (4) no joint degeneration or extensive damage of articular cartilage. The control patients were told that total meniscectomy may be performed if MRI showed severe injury but no cartilage injury in the menisci. Patients were also informed of the advantages and risks of MAT. When meniscectomy was necessary and the joint conformed to the surgery indication, MAT was performed and then included in the control group. The patients with (1) severe synovial diseases of the knee joint or joint degeneration or extensive damage of articular cartilage; (2) bilateral excision of menisci; or (3) history of severe trauma and surgery on knee joint were excluded.

All patients were informed of the operative risks and benefits and signed the informed consent. The selected meniscus allografts (State Food and Drug Administration (Approved), 2006 No.3461046) were provided by Beijing Yunkanghengye Biotechnology Co., Ltd and frozen before surgery. All surgery was performed by the same surgeon with keyhole methods. We matched the sizes of the allografts using Pollard’s method [12] and referencing to the results of Computed Tomography (CT) and MRI. All cases first underwent arthroscopy to classify the extent and location of cartilage damage, and then received articular cartilage and degenerative synovia debridement. The menisci were grinded and kept at synovial edge for 1-2 mm to fix the grafts. The anterior and posterior were located based on the residual footprint or the bony insertion site when the footprint was unclear [13]. Bone tunnel was drilled with the guidance of an Anterior Cruciate Ligament (ACL) locator. The anterior and posterior were fixed according to Line No. 5. The anterior of the meniscus was fixed using 1 to 2 outside-in sutures, while the posterior and body of the meniscus were fixed using 3 to 4 Fast-Fix sutures (Smith and Nephew Endoscopy). If no meniscus edge was left, anchors were used to place shinbone ligament of meniscus grafts in a fixed position on the tibia and complete the reconstruction of meniscus shinbone ligament. Totally ten patients in the MAT group received ACL reconstruction from the autologous hamstring tendons. The control group only received total meniscectomy according to the judgment of preoperative symptoms, and intraoperative MRI and identification. Totally eight patients in the control group received ACL reconstruction.

In the first 4 weeks after surgery, the MAT patients received knee brace in full extension and were allowed to do passive activities within a range of 0-100 degrees for twice one day. The motion range was increased by 20 degrees in the next 2 weeks. The affected limbs were protected from heavy weight. Partial weight bearing was acceptable from week 4 to 6, and full-weight bearing was allowed since week 6. Some routine exercises were allowed after 6-9 months. The control group received pressure bandaging in the first three days after surgery, and then did some exercise to adjust the motion range. Routine motion was not allowed until one month after surgery. Patients undergoing ACL reconstruction followed the ligament rehabilitation program.

Table 2 gives the comparison of results at final follow-up. After 40-month follow-up, the MAT group had significantly lower scores versus the control group (P<0.05), lower IKDC, Lysholm and single-leg hops, but higher scores of Tegner and VAS (all p>0.05). Besides, the included patients did not suffer from infection, swelling, pain, inter-locking, snapping or instability of joint gap. The student t test and Mcmurray’s test shown negative signs. The results of clinical assessment are shown Table 2.

We accessed and compared the clinical, radiographic and imaging results between MAT and meniscectomy at mid-term follow-up. As expected, final clinical results were improved in both groups. Although the differences were not significant, MAT could obviously protect articular cartilage and delay the recession of articular cartilage.

Previously, the standard treatment for meniscal injury was total meniscectomy. As reported, 78% of knees were improved after a mean follow-up of 4.3 years [19]. Total or subtotal meniscectomy could improve the knee joint in patients with meniscal tears [20]. However, the long-term effects of meniscectomy are controversial. In recent years, both biomechanics and animal trials showed that meniscus resection was accompanied by the disappearance of redistribution pressure function and stress concentration, which led to knee joint degeneration [21]. The stress to knee joint could increase by 100% after medial meniscectomy and by 200%-300% after lateral meniscectomy. The meniscus resection can accelerate knee joint degeneration [22] and can change the biological stress and cause the load transduction disturbance that results in osteoarthritis [23]. After 40-year follow-up, patients undergoing meniscectomy had 1.32 times risk of joint replacement compared to other patients with the same age [3]. After long-term follow-up of 14.5 years, mild postoperative arthritic changes happened despite the satisfactory outcomes in patients with total meniscectomy [24]. In line with these findings, satisfactory clinical findings were reported in young patients after more than 10 years of follow-up, but degenerative changes attacked the elderly [25]. Thus, monitoring was recommended for these patients. In our study, hyperostosis and arthrosclerosis occurred in the affected knee joints and joint gap became narrower after surgery. Analysis of Yulish scores also indicated that cartilage was injured more heavily than in the MAT group. This means joint degeneration and cartilage injury occurred although there were no obvious clinical symptoms in the control group after surgery. It probably exerted adverse impacts on joint function and life quality of patients and also increased the risk of osteoarthritis and replacement in the knee joint. On the contrary, the MAT group only showed slight degeneration and cartilage injury, which was consistent with a previous study that MAT-treated patients did not suffer obvious cartilage injury within 5 years [26].

Some patients with meniscectomy experienced repeated pains, swelling and other symptoms, which were associated with bad joint matching, synovial hyperplasia and cartilage degeneration. MAT can restore the meniscal integrity and fill the gap. Many reports about postoperative follow-up emerged since the first MAT was carried out in 1984 [27,28]. This point is strongly confirmed by our study. However, like other clinical reports and many clinicians, we also find no significant difference between MAT and meniscectomy. Thus, the graft disinfection, size matching, and fixation technique, that may have some effect on the postoperative results, all need further improvement. Besides, the advantages of MAT just were not showed up due to the short follow-up time.

In our study, 10 patients received MAT after meniscectomy. Because the source of meniscus grafts is very limited, MAT is sometimes accompanied with the risk of disease transmission. Generally, it is not widely accepted that clinicians perform MAT with the preventive aim. It is suggested that meniscectomy can break the cartilage proteoglycan, impact the synthesis of cartilage matrix and reduce the content, finally thinning the cartilage layer. Since cartilage cells are very sensitive to mechanical force, the above process would happen when the stress to tissues is large enough to cause biological damage [29]. Besides, morphology and structure of the femoral condyle could change. These chemical, biological and mechanical changes happened before MAT and were very hard to correct [30]. Therefore, early MAT may bring better benefits. In view of the limited source of graft, a better choice after meniscectomy may be meniscus tissue engineering or meniscus implant transplantation.

This study has some limitations. First, a complete randomized controlled trial with the consideration of ethical and clinical practice is unfeasible. A retrospective study must be limited by some bias that reduces the accuracy of results. The treatment methods were not based on randomized selection. Patients received a specific treatment depending on their willingness and conditions. We only selected a matched control for the MAT patients. Thus, a better prospective study design is needed in the future. Second, the MAT group included immediate transplantation and delayed ones, but there was no obvious cartilage injury for two types of patients, which limited the effect. Finally, the follow-up time was a little short, especially for assessment of cartilage injury and joint degeneration. This was why our evaluation was medium-term.