Background: Thyroid Carcinoma (TC) was the most frequent endocrine system malignant tumor with steadily increasing incidence in the past period of time, especially in young women. The cosmetic result of Endoscopic Thyroid surgery (ET) is superior to conventional Open Thyroid surgery (OT). Evaluation and comparison of the surgical results of ET via a Breast Approach (ETBA) and OT had been made in this study to investigate the usefulness of ETBA in Papillary Thyroid Microcarcinoma (PTMC) in lowrisk female patients.

Methods: From June 2015 to June 2016, a total of 55 female patients who have be proved to have PTMC were enrolled and allocated into two groups on the basis of the different methods of the operation, 20 patients experienced ETBA, 35 patients underwent OT. Many variances were analysed between two groups respectively.

Conclusion: ETBA was found to be similar to conventional OT in terms of early surgical outcomes, however, patients could get more satisfactory cosmetic effect without obvious scar in the neck. ETBA can be viewed as an acceptable alternative method in low-risk PTMC in female patients.

TC accounts for 5% of thyroid nodules [1], but is the most common malignancies in endocrine system. With a wide range applications of Ultrasonography (US) and ultrasound-guided Fine Needle Aspiration Cytology (FNAC), PTMC had been detected more frequently [2]. According to Lee [3], the thyroid gland is the fourth most common cancer site among females and PTC is 11 times more common in women than in men. The incidence of thyroid carcinoma showed a continued increase during recent years [4].

As we all know, the main treatment for TC is surgical resection now [5]. Excision of the thyroid through a skin crease incision in the anterior neck provides good direct exposure to facilitate safe dissection and a quick operation with low morbidity and minimal mortality [6]. It results in a cervical collar incision on the neck and leaves an obvious scar that compromises a patient's cosmetic appearance [7,8]. As Kim [9] argued that this incision will cause hypaesthesia or paraesthesia. This view was supported by Woo [10] who wrote keloids influence patients’ quality of life. Easily visible neck scars postoperation is an intolerable sequela for some female patients, especially for young women with keloids.

TC has been considered a disease with excellent prognosis. The overall survival rate has remained at 90% to 95% in recent decades [11]. Moreover, TC can remain in the home position and symptomless for long time with the overall survival not be affected. At this time, patients not only pay attention to the cure of the disease, but also to the quality of life after surgery [12]. Therefore, the demand for operation method which will reduce or hidden surgical incision while maintaining best physiological functions and ideal aesthetic effects was increasing.

Rapid development of endoscopic techniques and instruments (such as the technique known as minimally invasive surgery and ultrasonic scalpels) [13] has enabled doctors to perform thyroidectomy with a smaller incision or incision placement at hidden sites away from the neck, resulting in nonevident scars [14]. Each endoscopic approach has distinct merit and drawbacks with regard to the exposure of the surgical field, instrumentation, learning curve to competency, and preservation of critical structures [15]. Although many reports on surgical results of ETBA have appeared, rare prospective study comparing the results of ETBA and OT has been described. We therefore designed a prospective trial to compare the operation outcomes.

Between June 2015 and June 2016, we selected a total of 55 patients with thyroid nodules. The inclusion criteria were as follows: (1) female patients younger than 45 years old; (2) Papillary Thyroid Carcinoma (PTC) of less than 1 cm in tumor size; (3) no definite evidence of local invasion; (4) no evidence of metastatic lymph nodes; (5) no adhesion or fixation of enlarged lymph nodes around the neck compartment.

US and Computed Tomography (CT) scans of the neck were performed before the surgery and FNAC was not routinely performed. All patients underwent preoperative direct laryngoscopy to assess vocal cord motility. The diagnosis of PTMC was confirmed by means of intraoperative frozen section. Finally, enrolled in this study were 20 patients who underwent ETBA were assigned to the endoscopic group and 35 who underwent OT were assigned to the conventional open group.

All patients who were diagnosed as PTMC during operation were experienced thyroid lobectomy with central lymph node dissection. All operations were conducted by a same team of surgeon and carried out after giving informed consent concerning the surgical risks. All patients in ETBA group provided the possibility of conversion to OT.

Whether ETBA or OT, the preparation of the patient was the same. The patient was placed in a supine position, after general anaesthesia and endotracheal intubation, a pillow was placed beneath the shoulder to extend the head.

OT: Like all traditional open thyroidectomy, a 6-8 cm transverse collar skin incision was made in the middle of the anterior neck 2 cm above the sternal notch, and the lower layer of the platysma was exposed under direct vision. Platysma myocutancous flap dissection was performed to achieve adequate working space from the sternal notch to the level of the thyroid cartilage and to the medial edge of each of the sternocleidomastoid muscles laterally. The midline of the strap muscles was divided vertically, and the thyroid gland was exposed. The wounds were closed with absorbable suture material by a continuous subcutis suture method [16].

ETBA: Total endoscopic thyroidectomy differs greatly from the conventional approaches in that it requires creation of a subcutaneous working space [17]. Ohgami et al. [18] are the first to perform ETBA. They are to be congratulated for their bold attempts at approaching the neck via remote portals: ports are placed in the areola margin of both breasts and in the right parasternal region between the nipples.

We referred to the practice of predecessors [9,14]. A skin incision 1.2 cm in length was made in the right parasternal region at the nipple level. Then the subcutaneous tissue of the anterior chest wall was dissected bluntly through the incision and a 10-mm trocar for endoscopy was inserted. Carbon dioxide gas at a pressure of 6-8 mmHg to inflate the working space. Two 5 mm trocars for the operator were inserted into the upper margin of bilateral areolas. The working space was made widely to the hyoid bone level superiorly, and both the medial side of the anterior border of the sternocleidomastoid muscle laterally with the visual guidance of the endoscope. The space between the ‘‘red’’ platysma or ‘‘yellow’’ fatty tissue and the ‘‘white’’ aponeurosis were the guides to establishing the right plane of dissection [19].

An aspiration drainage tube was placed in thyroid bed through the edge of the separate skin incision in OT and the left mammary areola in ETBA before concluding the operation. All patients were followed up for at least 6 months after surgery.

Body mass index (BMI): One’s weight in kilograms divided by the square of one’s height in meters. Operation time was defined as the time interval between skin incision and closure. The aspiration drainage tube was removed when volume of drainage became less than 30 ml a day after surgery. Amount of drainage was calculated after the operation to the drain was removed. Hypocalcemia was defined as a serum total calcium level less than 8 mg/dL with hypocalcemic symptoms during the hospitalization. Vocal cord palsy, documented by direct laryngoscopy for all patients with hoarseness after surgery. When hypocalcemia and vocal cord palsy lasting more than 6 months after surgery and there was no evidence of recovery was regarded as permanent. All patients were asked to grade their satisfaction with the cosmetic results and postoperative pain in the neck or anterior chest wall.

There was no case of conversion to OT during the ETBA.

The postoperative complications are listed in Table 2. Two (10%) in endoscopic group and nine (25.7%) in open group experienced a serum total calcium level less than 8 mg/dL or had a symptom of numbness of extremities, which was not statistically significant (P=0.293). The number of patients who experienced voice hoarse were two (10%) and four (11.4%), and P=1.000. Each group has one (5% and 2.9%) occurred hematoma. The two groups show no statistically significant differences in terms of temporary hypocalcemia, vocal cord palsy and hematoma (P=0.293, 1.000 and 0.683, respectively). All patients with complications recovered in postoperative follow-up time. No permanent or other serious procedure-related complications occurred in either group, and clinical outcomes appeared to be good. 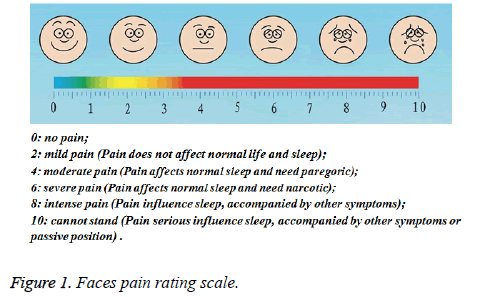 We defined the scores 0 and 2 are the pain that can bearable, the rest of the scores are defined as the pain need to medical intervention.

Table 3: Postoperative pain for the neck or anterior chest wall in two groups.

Data on patient satisfaction with cosmetic results are presented in Figure 2. 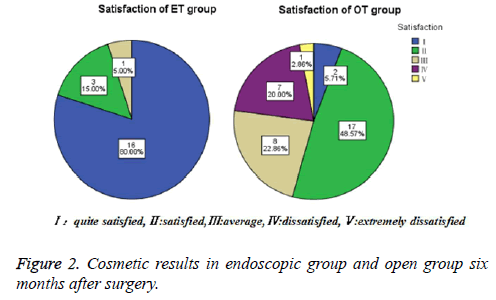 The prevalence of PTC is growing at a faster rate than any other malignancy [20]. To avoid cosmetically undesirable outcomes, various approaches of endoscopic techniques have been developed with the aim of minimizing or eliminating incisional scar formation on the neck.

Patients with PTMC who received ETBA could achieve similar efficacy, compared with those who received conventional OT. The rates of transient hypoparathyroidism and recurrent laryngeal nerve injury after OT range from 4.3% to 17.7% and 2.2% to 3.7%, respectively [16,24,25]. In this study, the result of transient hypoparathyroidism after ETBA was similar (10%), but the rate of recurrent laryngeal nerve injury was observed in 10% of patients, probably because the lack of enough cases, this was not statistically significant (P=1.000). We obtained a relatively similar complication rate in endoscopic and open group. No permanent complication was discovered. During the short follow-up period, there was no recurrence or metastatic cases in both groups. Because at present develops the surgery number are few, the operation time was longer in endoscopic group than in open group (169 ± 56.489 min versus 127.74 ± 42.051 min, P=0.003). With the proficiency of surgical technique, more case of illness and experience accumulation, the time will be shortening.

ETBA has the advantages of less pain and favorable cosmesis. According to our results, postoperative pain score of ‘bearable’ at 1 d, 2 d, 3 d and 7 d were 12, 17, 18 and 20 patients respectively in endoscopic group, and 5, 14, 28, 35 respectively in open group. At first two days, the differences were statistically significant (P=4.169 × 10-4 and 0.001 respectively), after one week, all patients could ‘bearable’ the pain for the neck or anterior chest wall. Meanwhile, only one case was ‘average’ with the cosmetic result in endoscopic group, but in open group, 8 cases were ‘average’ and 7 were ‘dissatisfied’ and 1 was ‘extremely dissatisfied’ with the cosmetic result. The total satisfaction were 19 and 19 in two groups respectively, which was statistically significant (P=0.002). ETBA provide a safe excision of the thyroid pathology with the absence of a scar in the neck. The shorter a single incision is, the less it disturbs the integrity of the anatomic structure. After ETBA, the incisions can not only be hidden with everyday clothing but also reduced. ETBA satisfied patients’ request for improved postoperative quality of life, which was especially important in patients who wished to keep their surgical history private [19,26].

With an endoscope to magnify the surgical field and the approach described here, we easily identified and preserved the recurrent laryngeal nerve and parathyroid glands. With the widespread adoption of ET and the development of new surgical techniques and instruments, the application criteria for ET will be extensive [27].

Although there is room for improvement in terms of shortening the operation time and accumulating more cases, the preliminary results of this study are encouraging. ETBA patients showed significantly greater improvement in emotional function and physical function.

In a word, ETBA is a technically feasible and safe procedure with outcomes similar to those of conventional OT when considering short-term adverse events. It has the advantage of better cosmetic results than OT. ETBA is an effective alternative method for selected patients with PTMC. We are optimistic about the future expansion of its applicability. Our future study will focus on dissemination of ETBA and meets the needs of more patients.