Rheumatoid arthritis is a chronic inflammatory disease condition in synovial joints causing progressive destruction of synovial fluid resulting moderate to severe pain. Oxidative stress plays a major role in inflammation. Free radicals which are found to have in our body, either as a product of metabolism or incorporated from our environment, plays a major role in formation of oxidative stress, that leads to inflammation. To reduce this oxidative stress anti-oxidant may contribute in management of inflammation. In this study, the antioxidant and anti-inflammatory property of tartaric acid and β- carotene has established and compared with vitamin C and diclofenac sodium as standard drug. The free radical scavenging assay and protein denaturation assay was conducted for this purpose. The % inhibition confirmed the activity of individual molecules. According to the study outcome, Tartaric Acid is more effective antioxidant and anti-inflammatory agent than β-carotene. And so far it can be used as anti-rheumatoid arthritic agent. The IC50 values and graphical representations confirm the result.

RA is a special type of inflammation in synovial joints, a progressive annihilation of synovial fluid shows frequent inflammatory outcomes soreness, heat, blush, swelling and loss of function. And rigid joints cause mutilation of functional status, and as well symptoms such as exhaustion, low-grade fever and loss of weight [1]. Free radical in body either from the influence of metabolic by-product or from environment source causes serious oxidative stress, which produces ROS and RNS, that is responsible for the pathogenesis of different disease and illness [2-8]. Several available medicines often cause alteration in serum concentration, but persistent and continuous joint inflammation causes progressive destruction of synovial joints. In this context, using phytomolecules having antioxidant would have less side effects and cost effective.

Free radicals interferers with the functional stability of erythrocytes. Oxidative stress in RBCs by available free radicals cause hemolysis, due to high reactivity of the free radicals on the cell membrane causes potential damage of RBCs which decreases tissue oxygenation. During hemolysis, haemoglobin, present inside RBC is released into the blood stream. The released hemoglobin in the external microenvironment is oxidized by molecular oxygen to form methemoglobin [9-12].

Chemicals and reagents and apparatus

5 ml of blood from different healthy human volunteers (age between 22-45 y) was collected in EDTA containing vials by veinpuncture method along with their filled up consent form. The blood from vial immediately transferred to 15 ml centrifuge tube. With 5 ml of blood 10 ml of freshly prepared PBS added, and it centrifuged for 5 minutes at 3000 rpm. Then the supernatant was taken off and with the remaining settled RBCs again 10 ml of PBS added and centrifugation was repeated for three times to remove the excess plasma [3] and ultimately the settled RBCs were taken.

The previously collected RBCs were mixed with phosphate buffer in 1:20 ratio to prepare hemosylate (The product resulting from the lysis of red blood cells.)

Antioxidant activity: Drug activity against nitrite induced lysis of hRBC was performed [13] to 1 ml of hemosylate, different concentration of drug sample is induced. And 0.01 ml of 6.0 mmol/L sodium nitrite added so that methohemohlobin formed. And the amount of protection to the RBC by the drug was measured in spectrophotometrically at 631 nm after 50 min of incubation at 37°C [3].

% inhibition was calculated by

Drug activity against hydrogen peroxide induced lysis of hRBC was performed accordingly [14] to 1 ml of hemosylate, different concentration of drug sample was induced concomitantly with 0.1 ml of Hydrogen peroxide added. Then all the test tubes were incubated for 1 h and centrifuged for 10 min at 2000 rpm following the separation of supernatant and absorbance was measured at 540 nm. Vitamin C was taken as standard [3]. % inhibition was calculated by,

In vitro anti-inflammatory activity [15,16]: Protein denaturation assay method was followed to evaluate antiinflammatory activity. A stock solution of 0.2% w/v of BSA was prepared in phosphate buffer and pH was adjusted from 8.54 to 6.74 using HCL. Test compounds (β-carrotene and tartaric acid respectively) and standard compound (diclofenac sodium) was prepared.

Few replicates of BSA stock solution with test and standard compound was pipette out and mixed and the final volume of each tube was adjusted with distilled water upto 5 ml. And incubated at 37°C for 30 min, followed by induction of 55°C heat as a thermal stress for 5 min.

Then all the samples are cooled down for 20 min. Absorbance was checked at 660 nm.

Methemoglobin (MetHb) is another dysfunctional form of hemoglobin incapable of transporting oxygen. Methemoglobinemia occurs with elevated levels of MetHb. Hemoglobin contains iron in the ferrous state (Fe++) whereas MetHb contains iron in the ferric state (Fe+++). Similar to COHb, heme molecules in MetHb are not only incapable of transporting oxygen molecules, but they also have an allosteric effect, increasing the affinity of the remaining heme groups for oxygen [20].

hRBC produces NO (nitric oxide), a free radical, is produced due to presence of sodium nitrite. NO converts haemoglobin to methemoglobin which appears as a chocolate brown coloured blood. The more the concentration of the treatment drug, less in the formation of methemoglobin, results in lower absorbance. If the absorbance is higher, it confirms the drug has lower anti-oxidant activity.

After incubation the absorbance was taken, and % inhibition was calculated accordingly. The values obtained are plotted in Graph Pad Prism-5 software, and the % inhibition vs. concentration of different molecules, i.e. tartaric acid, β- carotene, vitamin C drawn, that suggests the comparison of anti-oxidant activity. 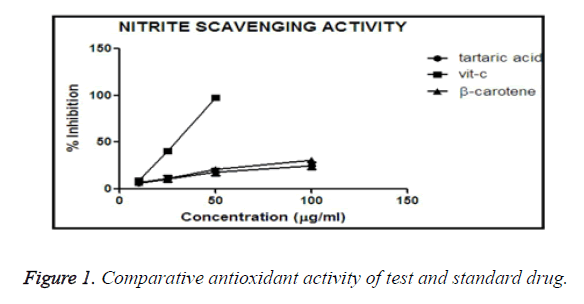 Hydrogen peroxide is another free radical which exhibit oxidative stress on cell membrane [21]. In case of RBC the cell rigidity decreases due to influence of hydrogen peroxide, causing cell death. Our study molecules (Tartaric acid, β- carotene and vitamin C) which thought to have anti-oxida nt activity would protect the cell from lysis. All the test tubes were marked, and in different (0, 10, 25, 50, 100 μg/ml) concentrations of treatment drugs were mixed. After incubation the absorbance were taken, and % inhibition was calculated.

The values obtained were plotted in Graph Pad Prism-5 software to obtain the graphs of % inhibition vs. concentration of different molecules, i.e. tartaric acid, vitamin C which suggests the comparison of anti-oxidant activity.

From the graph it was obtained that, vitamin C shown maximum % inhibition in comparison to β-carotene and tartaric acid. Vitamin C shown the maximum potency to reduce the oxidative stress, and among test molecules tartaric acid shown better anti-oxidant activity than of β-carotene.

The IC50 values were calculated, from the obtained data. IC50 values describes about the minimum concentration needed to obtain the biological response. 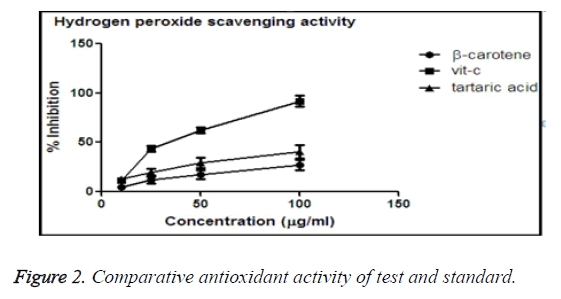 From the graph it is suggested that the standard drug diclofenac sodium shows the most anti-inflammatory activity than our experimental test drug. It is also clear that among the test drugs, tartaric acid has more ability to inhibit protein denaturation than β-carotene (Figure 3). 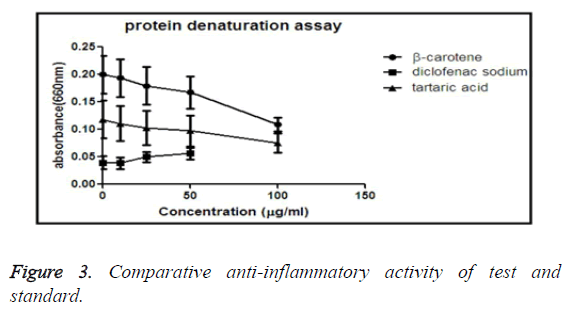 Previously, the in vitro anti-oxidant activity was already been established [22] for β-carotene, here in this study the effect on human RBC was shown. The obtained results ensure the effectiveness of β-carotene to protect blood cell from cellular oxidation. Similarly the anti-oxidant activity of tartaric acid isolated from grape fruits was shown [9], but he comparative anti-oxidant and anti-inflammatory study was not established earlier. In our study protocol, it has been observed that both the molecules have good antioxidant activity to control cellular oxidation. They can be used as anti-inflammatory agent. The present study regarding, free radical scavenging assay of β- carotene and tartaric acid on hRBC by using vitamin-C as standard, the comparative reductive capacity on oxidative stress has been evaluated.

The result obtained after the study reflects tartaric acid is more effective antioxidant and anti-inflammatory agent than β- carotene on hRBC and as shown in establishing antiinflammatory activity by using standard drug. And so far it can be used as anti-rheumatoid arthritic agent as already discussed that rheumatoid arthritis is a degenerative autoimmune inflammatory disease.

After the study it can be concluded that the results found quite satisfactory for treatment of rheumatoid arthritis and inflammation and both the molecule has potent anti-oxidant potential at the same time. As the conventional medicines, available in market is costly and have several side effects, it is believed that treatment with phytomolecules would be a good alternative choice. The comparison study would be beneficial for selection of specific molecule. In future, if more phytomolecules are included in the study and compared, that will be more beneficial and the statistical value will be more acceptable.