Comminuted fracture with butterfly fragment of the humerus sustained during arm wrestling.

Arm wrestling is a popular activity enjoyed by men and women of all ages. Although uncommon, several cases of arm wrestling injuries have been reported in the medical literature. Fractures of the humerus sustained during arm wrestling are rare clinical entities that can be confused with pathologic fractures. A butterfly fragment subtype of comminuted humeral fracture is an even more exceptional presentation of arm wrestling injury. We herein present a case of comminuted oblique fracture with a large butterfly fragment of the distal humerus in a 25-year-old man who had been involved in arm wrestling. Midway during the struggle while straining to overcome his opponent, the patient heard a loud snapping noise and felt sudden intense pain in his right arm. Radiologic findings revealed a comminuted oblique fracture at the distal third of the humeral shaft with a large butterfly fragment. It is thought that fracture of the humeral shaft during arm wrestling is the result of bending moment, axial compression and torsional forces applied to the humerus. This type of fracture may occur in anyone of any age engaging in this type of sport. The author suggests awareness of this entity and recommends appropriate radiologic and neurologic examination for injuries involving intense muscular contractions. Because of the possibility of participants sustaining such an injury, arm wrestling should not be considered a totally benign injury. Arm wrestlers should be conscious of the risks of practicing this activity.

A fracture of the humeral shaft constitutes 3% to 5% of all fractures [1]. The humeral shaft fracture occurs most frequently as a result of direct violence, such as falls, direct blows to the arm, automobile injuries or crushing injuries from machinery [2]. Indirect trauma, such as falls on the elbow or the outstretched hand, or even intense muscular contractions, may also cause fracture of the humeral shaft [3]. Previous reports have described fractures of the humerus caused by torsional forces induced by throwing objects such as hand grenades [4], softballs [5] and javelins [6] or by intense muscular contractions during arm wrestling [3, 7-10].

Arm wrestling has become a popular sport practiced by both professionals and amateurs. Its popularity comes from the fact that the rules are simple, and it does not require the use of complicated equipment [4, 8]. However, compared to other sports disciplines, arm wrestling is considered to be neither benign nor safe as it leads to the occurrence of serious injuries. In the relevant literature several cases of humeral fractures and soft tissue damage have been reported to be associated with arm wrestling injuries [7, 9-15]. These have included spiral fractures of the humeral shaft, fractures of the olecranon, avulsion fracture or fracture-separation of the medial humeral epicondyle and rupture of the subscapularis tendon.

A 25-year-old, right-handed man presented to the emergency department with severe pain and limitations in range-of-motion of his right arm. He did not have any orthopedic disease and recent trauma history on his upper extremity. The patient reported the occurrence after entering an impromptu arm wrestling match with his colleague. He and his opponent had stood across a kitchen table with their right thumbs and wrists interlocked, the opposite hand of each cradling the opponent’s elbow. Approximately 10 to 15 seconds into the match, the patient, needing to drive his opponent’s arm another 3 to 4 inches downward to win, exerted a burst of energy. At that moment, he heard a loud snapping noise and felt sudden intense pain in the right upper arm. He denied striking his arm on the table. He denied any medical history in the past. Physical examination of the patient’s painful upper arm revealed shortening deformity, swelling and extreme tenderness. There was no obvious erythema, ecchymosis or open wound. There was no apparent evidence of neurovascular injury, especially for radial nerve. An x-ray of the patient’s humerus taken soon after injury showed a displaced oblique fracture with a butterfly fragment of the distal humerus (Figure 1). Because of the unusual mechanism of his injury and a large butterfly fragment at the fracture site, computed tomography scanning was performed to exclude metabolic bone disease and benign or malignant bone lesions. Three-dimensional reconstruction from computed tomography images of the right humerus confirmed a comminuted oblique fracture with a large butterfly fragment (Figure 2). There was no radiologic evidence of pathologic bone. The patient was referred to an orthopedic surgeon who elected to treat him by immo bilization in a long arm cast with the elbow in approximately 90 degrees of flexion. 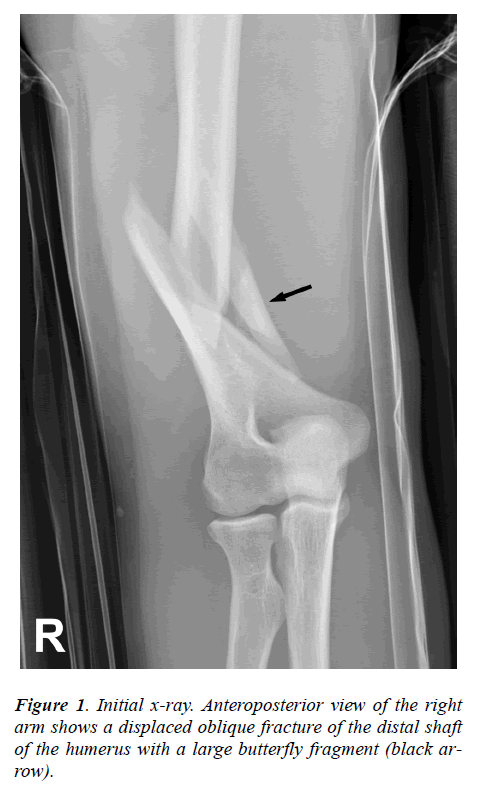 Figure 1: Initial x-ray. Anteroposterior view of the right arm shows a displaced oblique fracture of the distal shaft of the humerus with a large butterfly fragment (black arrow).

Figure 2: Three-dimensional reconstruction of computed tomography images viewed from the (A) anterior, (B) medial and (C) posterior aspects of the right humerus. Image A corresponds well with the Figure 1. These findings confirm a comminuted oblique fracture with a large butterfly fragment (white arrow) of the distal third of the humeral shaft. There is no radiologic evidence of pathologic fracture.

Intense muscular contractions can be a mechanism of injury in various sports and can affect various bones. The humeral shaft fracture during arm wrestling occurs when moments of torsional forces induced by intense muscular contractions are transmitted onto it. The moments of these forces are resultant of forces acting in the direction of internal rotation by the pectoralis major, latissimus dorsi, teres major and subscapularis, and resultant of external rotational forces applied by the opponent and transmitted by the long forearm lever through the elbow. In both cases the results of opposite directional forces occur thanks to the work of the internal rotator shoulder muscles. When the dominant competitor exerts force, the internal rotator muscles of the opponent undergo rapid stress from their maximum concentric contraction to eccentric passive compensatory relaxation, causing an increase in the humeral rotational force. This results in the transmission of the stress through the distal part of the arm and elbow, causing a shifting of the maximum force to the humerus and its fracture. Nyska et al. [15] note that the fracture is usually in the distal third of the humerus, and suggest that the forces acting on the humerus are bending, axial compression and torsional forces, while the flexor muscles of the forearm are forcefully contracted.

In our case, we could easily consider the possibility of humeral fracture with the patients’ clinical presentations, so we performed imaging studies without any hesitations. Some fractures, however, which are not related to direct or indirect contact forces, can be missed if they do not cause severe symptoms. Intense muscular contractionsrelated fractures of protruded bone, such as those of the olecranon, anterior superior ischial spine of the pelvis and fifth metatarsal base of the foot, are good examples. We therefore suggest that a diagnosis of fracture should be considered in cases of intense muscular contractions. A careful history taking and radiologic examination will enable to prevent misdiagnosis and mismanagement.

Every long bone fractures do not require computed tomography scanning routinely, but in our case, we performed it due to the presence of a large butterfly fragment. With the understanding of three-dimensional morphology of fracture site as well as its location, we could decide proper operative methods. Also, fracture of the distal one third of humerus is deeply associated with the occurrence of radial nerve palsy. Of the few complications with humerus fracture sustained during arm wrestling that have been reported, the most common is radial nerve palsy, which usually manifests as wrist drop. It can be caused by direct damage due to the butterfly fragment, so it is very important to understand the morphology of the fracture site.

For the treatment of such injury, conservative management was mainly recommended at past. However, because of developed instruments and increased patients’ requirements, operative treatments have been recently performed by many orthopedic surgeons.

In summary, the present case illustrates that the extremely high indirect forces generated by sudden intense muscular contractions during arm wrestling can cause a comminuted fracture of the humerus. Severe pain in arm wrestlers should not be attributed solely to musculoskeletal sprains and ruptures. All patients who present with histories of sudden arm pain after arm wrestling should receive appropriate radiologic studies and a careful neurologic examination to exclude fracture and prevent misdiagnosis and mismanagement. This type of fracture may occur in anyone of any age engaging in this type of sport. Especially, amateurs are injury-prone because they use bad wrestling techniques. Because of the possibility of participants sustaining such an injury, arm wrestling should not be considered a totally benign injury.