To determine the significance of serum Hyaluronic Acid (HA) levels in prognosis of patients with Nasopharyngeal Carcinoma (NPC) by observing the variations of serum HA levels in patients before and after the radiotherapies.116 serum samples, including 40 from NPC patients prior to the treatment, 36 from NPC patients after the treatment, and 40 from healthy individuals were collected. Radioimmunology assays were performed to determine the serum HA levels. The results showed that Serum HA levels are 3.75-fold elevated in the NPC patients (205.8 ± 62.7 μg/L) compared with healthy individuals (54.9 ± 19.2 μg/L, P<0.001). The threshold of the serum HA level was set as 74.1 μg/L, which exhibits 85.0% of sensitivity, 87.5% of specificity, and 86.3% of accuracy for positive NPC determination. Serum HA levels in the patients treated with radiotherapies (117.5 ± 46.3 μg/L) were significantly lower than those in the patients without treatments (194.4 ± 62.4 μg/L, P<0.01). Statistical analysis revealed that the serum HA level is positively correlated with clinical stages and local invasion (P<0.01). These results suggested that the serum HA level may be served as a sensitive and specific tumor marker for the detection, monitoring, and prognosis of NPC.

Nasopharyngeal Carcinoma (NPC) is one of the most common head and neck malignant tumors in China, which can be treated by combination of drug delivery, as well as radio and chemotherapies. Although the cancerous cells can be attacked by the immune system, immune escape could lead to metastasis of the cancerous cells, reducing the effect of the treatments of the radio and chemotherapies. Many studies have demonstrated the circulating Hyaluronic Acid (HA) levels are significantly related to the metastasis of tumors [1].

HA is a linear polysaccharide consisting of repeated units of nonsulfated glycosaminoglycans, widely distributed in connective tissues and Extracellular Matrix (ECM) [2-4]. As one of the major components of ECM, HA significantly contributes to the maintenance of cell hydration, osmotic pressure, and the resilience of cartilage [3,5]. Also, HA can interact with various cellular receptors, including CD44, RHAMM, and LYVE-1, to promote angiogenesis [6], as well as the growth, invasion and metastasis of tumors [7-9]. The circulating HA has also been found to facilitate cancerous cells to escape the immune surveillance [7], and reduce the delivery of chemotherapeutic agents, including doxorubicin, and mitomycin C [10].

Local fibrosis and chronic inflammation of nasopharynx after radiotherapies is challenging the diagnosis of the recurrence of NPC, which is an essential factor for NPC prognosis. The diagnosis of the recurrence of NPC, as well as the prognosis of NPC after radio or chemotherapies can significantly increase survival time and rate [13,14]. A significant element for NPC prognosis is the clinical TNM stages of NPC, which involves the circulating HA levels [11,15,16]. Studies on the gastric cancer, colon cancer and breast cancer suggested the serum HA levels were related with the survival time and the prognosis of the patients. Therefore, in this study, we observed the changes of serum HA levels in the patients before and after the treatments to determine the significance of the HA in the prognosis of patients with NPC.

40 patients accepting their first treatment from May to July of 2005, at the age of 47.7 ± 12.7, were collected in this study, including 28 males and 12 females, and identified as poorlydifferentiated squamous cell carcinoma by pathological histology. In according to the 92 Fuzhou staging standard, T represents local invasive area of NPC with 1-4 indicating increased areas and N represents the clinical stages of NPC. The 40 patients were classified as one case of phase I (one case of T1N0), seven cases of phase II (three T1N1, one case of T2N0, three cases of T2N1), 16 cases of phase III (two of T1N2, six of T2N2, three of T3N0, three of T3N1, two of T3N2), 16 cases of phase IVA (one of T1N3, one of T2N3, two of T3N3, two of T4N0, five of T4N1, three of T4N2, and two of T4N3). Radiotherapies, chemotherapies or the combination of radio and chemotherapies were performed to each patient dependent upon the NPC stages. 40 serum samples were obtained from healthy individuals at the age of 47.2 ± 12.4, including 26 males and 14 females. The informed consent was acquired before the sampling procedure, and the experiments were approved by a local ethics committee.

2 ml peripheral venous blood was collected from the healthy individuals and the patients with empty stomach before and after their radio- and/or chemotherapies. Blood samples were centrifuged immediately after collection at 2500 rpm. The supernatant was collected and stored at -20°C. Competitive radioimmunoassays (Haiyan Medical and Biological Technologies, Ltd., Shanghai, China) were performed to determine the serum HA levels, as per the protocol provided by the manufacturer.

Continuous variables were presented as mean ± SD, categorical variables were presented as percentages (%). Mean ± SD of the control group indicates the positive detection. Test of normality and homogeneity test of variance were performed prior to any statistical analysis. Variance analysis and pairedsamples t-test were performed to compare means. All the statistical analysis was performed with SPSS 10.0, with α=0.05, P<0.05 indicating significant differences.

4 of the NPC patients did not complete the treatments. Therefore, only 36 serum samples were analysed to study the effect of treatments on the changes of HA levels. Before treatments, the serum HA levels were 194.4 ± 62.4 μg/L and were significantly decreased due to the treatments, reaching 117.5 ± 46.3 μg/L (P<0.01).

The involvement of serum HA levels in the NPC stages 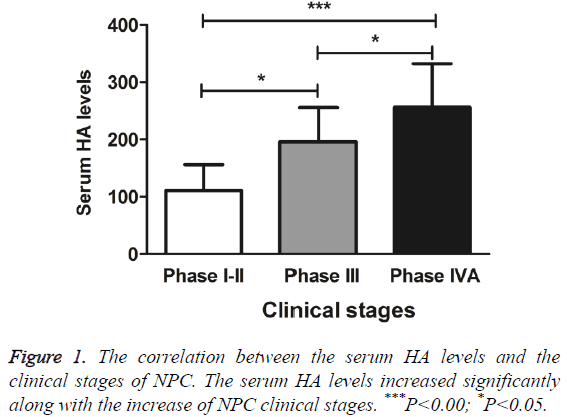 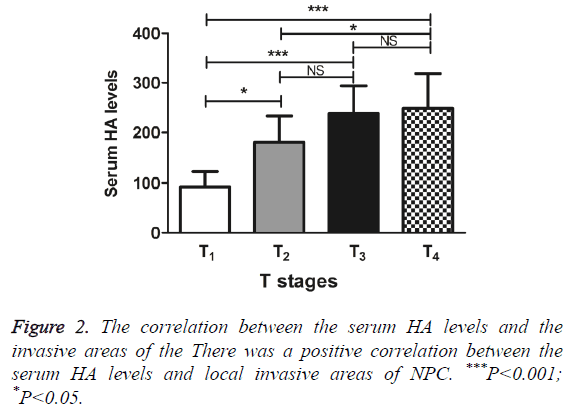 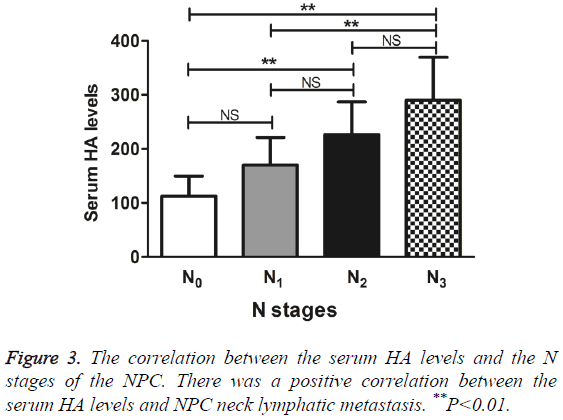 As one of the most common head and neck malignant tumors in China, the diagnosis and prognosis of the NPC have been suggested to be essential to influence the survival time and rate of the NPC patients. Therefore, in this study, we aim to evaluate the significance of the serum HA levels for NPC diagnosis and prognosis. By comparing the serum HA levels between the NPC patients and the healthy controls, we found the patients showed 3.75-fold higher levels of serum HA prior to the treatments than the healthy controls (P<0.001). With the threshold for positive NPC detection at 74.1 μg/L, serum HA levels exhibited 85% of sensitivity, 87.5% of specificity, and 86.25% of accuracy as an NPC diagnostic marker. Studies on various types of cancers have discovered that the elevated HA levels were produced by the cancerous cells or/and tumor interstitial cells [11,12,17,18]. Studies on the head and neck tumors by Franzmann et al. [18] have shown the expression of hyaluronic acid and hyaluronidase by RT-PCR, as well as considerable amount of HA in the supernatant of the cell culture [18]. Although the elevated serum HA levels were detected in our study, the causes of the increase remains unknown, and will be investigated in future studies

The statistical analysis of this study revealed the serum HA levels were positively correlated with the clinical stages, local invasion, and lymphatic metastasis of NPC. This can be explained as the HA has been found to promote the formation of lymphatic capillaries of the NPC tissues [20]. In addition, the increased amount of LYVE-1 expressed lymphatic capillaries in the tumors could lead to lymphatic metastasis, local recurrence and poor prognosis of the tumors [21]. The interaction of HA and LYVE-1 facilitates the formation of lymphatic vessel tumor thrombus during tumor invasion [22]. Although this study did not discover the correlation between the serum HA levels and the distant metastasis of NPC, some studies indicated the elevated HA levels can be used as an independent factor to predict the metastasis of NPC [16,23].