HIV infection represents a major public health problem for both developing and developed countries as it has grown to pandemic proportions worldwide. The UNAIDS estimates that at the end of 2007, there were approximately 33 million people living with HIV/AIDS globally [1]. Currently it is estimated that about 2.5 million people are living with HIV in India [2]. The Sentinel surveillance conducted in October 2007, shows that states of northern India including Uttar Pradesh (UP), Bihar, Uttaranchal have a low level HIV epidemic with the rate of HIV infection being <1% among antenatal women and <5% in any of the high risk groups [3].

It has been observed that the clinical course of HIV infection varies considerably from patient to patient and the spectrum of opportunistic infections also varies depending on the geographic regions [4,5]. A few studies in India have documented self reported presenting symptoms in HIV/AIDS patients [6,7,8,9,10,11]. The present study analyses the profile of clinical features and opportunistic infections in HIV infected adult subjects attending a tertiary care teaching hospital in north India.

The study was conducted in the Department of Microbiology of Chhatrapati Shahuji Maharaj Medical University (C.S.M.M.U.) Hospital, Lucknow. This is a tertiary care teaching hospital located in the capital city of India’s most populous state Uttar Pradesh. The hospital caters to the poor and seriously ill patients from the city and several surrounding districts. Patients are mostly referred from primary health centres, district hospitals, nursing homes, private doctors and community health workers. The hospital has an Integrated Counselling and Testing Centre (ICTC) facility which is well attended and provides counselling and HIV testing and linkages for medical and psychosocial care for persons living with HIV infection. The hospital also has an active AntiRetroviral Therapy (ART) Centre.

Ethics Committee of C.S.M.M.U. provided ethical clearance for the study. 317 HIVinfected adults attending the ART Centre and the ICTC were enrolled in the study between January 2007 and July 2008, after obtaining informed consent. The subjects were interviewed using a predesigned proforma. Current clinical symptoms were elicited by direct questioning by the interviewer, using a checklist. The questions were designed so that answers were obtained in a yes or no format. Questions were asked in the local language and responses recorded. Case records at the ART Centre were reviewed to obtain data for documented opportunistic infections in the subject around the interview date.

The sociodemographic characteristics of the study population are given in Table 1. 193/317 (60.9%) HIV positive subjects enrolled were males and 124/317 (39.1%) females. Mean age of the patients was 34.2 ± 7.9 years. Most patients were in the 20-39 years age group. Majority 219 (69.1%) of the patients had no or low literacy levels and were mostly (83.9%) from a rural background. 53 (27.6%) of the male patients were currently unemployed or had low paying occupations like small scale farmer, small shopkeepers, fruit and vegetable sellers, driver or daily casual labourer. The median income in these patients was about Rs. 1000/- per month. Most of the female patients were housewives and had no independent income. 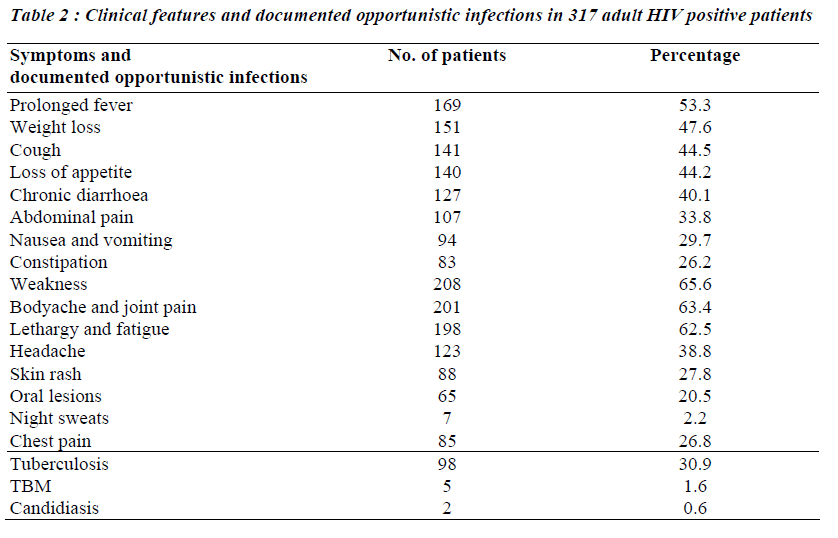 In the present study, the profile of clinical features and opportunistic infections in adult HIV positive patients attending a large tertiary care teaching hospital were analyzed.

The demographic profile of HIV positive patients at our centre appears to be broadly similar to that reported from other parts of the country [9,10,11].

Common symptoms in the present study as in other studies from India are generalized symptoms like weakness, bodyache & joint pains and lethargy & fatigue were present in more than sixty percent of the patients followed by fever, weight loss, cough, loss of appetite and chronic diarrhoea [6,7,8,9,10,11]. While some of the large variety of symptoms noted may be due to the HIV infection itself or antiretroviral therapy related, they can also be due to opportunistic infections like bacterial, fungal or viral pneumonias, hepatitis, cryptococcal meningitis, toxoplasmosis, oesophageal candidiasis, extra pulmonary tuberculosis and cryptosporidial or isosporidial diarrhoea, which need to be established by laboratory testing.

Tuberculosis (30.9%) was the most common laboratory documented opportunistic infection observed in our study [4,12,13] followed by TBM (1.6%) and candidiasis (0.6%). There is considerable difference in the spectrum of opportunistic infections in AIDS patients in India compared to western countries. Kaposi’s sarcoma, lymphoma, CNS toxoplasmosis, atypical mycobacterial infection and disseminated cytomegalovirus disease, common in western literature, were not seen in this study. Similar trends are observed in other studies from other parts of India [6,7,8,11,14].

The proportion of symptomatic patients in the study was (85.5%) much higher than the proportion of patients with an etiologically documented opportunistic infections (32.5%). One of the reasons may be that in userpaid health care settings, most patients are unable to afford the cost of investigations needed, to establish opportunistic infections. In our health care settings, while diagnostic testing services for HIV, CD4+ Tcell enumeration and antiretroviral therapy are offered free of cost through support from the National AIDS Control Organization (NACO), Government of India, patients have to pay for other laboratory parameters including tests for opportunistic infections. Also in overcrowded Outpatient department (OPD) minor symptoms may be often ignored or patients offered symptomatic or empirical therapy with no attempt being made to document or obtain an etiological diagnosis.

We are grateful to Prof. U.K. Misra, Senior Professor and Head, Department of Neurology, and Dean, Sanjay Gandhi Post Graduate Institute of Medical Sciences, Lucknow for his constant help and guidance throughout the study and for critical reading of this manuscript. This study was funded by the Uttar Pradesh Council of Science & Technology, Lucknow.