Objective: To evaluate the clinical security and the feasibility of Submucosal Tunneling Endoscopic Resection (STER) for treating the submucosal tumors of esophageal.

Results: All 58 patients’ tumors were resected en bloc successfully by STER at one time, the en bloc resection rate was 100%, the mean operation time was 63.24 ± 15.10 min, a bit shorter than the ESE group (71.97 ± 25.46 min), and there was significant difference between two groups (t=2.018, P=0.047). The mean size of the tumors was 2.07 ± 0.8 cm, larger than ESE group (1.28 ± 0.63 cm), and there was significant difference between two groups (t=4.659, P=0.013). No intraoperative perforation occurred in STER, and fevers 9 cases (15.8%), subcutaneous emphysema 3 cases (5.3%) and pneumothorax 2 cases (3.5%) were observed post operation, all patients recovered after conservative treatment. No delayed bleeding and secondary infection and esophageal fistula. The mean postoperative hospitalization days were 5.72 ± 2.24 d, no significant difference was observed compared with ESE group (6.27 ± 3.10 d). The incidence rate of fever, subcutaneous emphysema and pneumothorax of STER group were lower than the ESE group, but no statistical significance was observed. Three months later, gastroscope or Ultrasonography (EUS) review showed wound healing, and no residual tumor or relapse.

Conclusion: STER is a safe and feasible method for treating esophageal sumucosal tumors, and it worth of clinical promotion.

With the increase of people’s health awareness and the development of Endoscopic diagnosis technology, upper gastrointestinal submucosal tumor draws more attention of the medical profession, the diagnostic rate of esophageal submucosal tumor increased significantly. Submucosal tumor such as leiomyoma, lipoma, stromal tumor, etc., most of which are benign tumors, a few have malignant potential or obstruction symptom and need active treatment. It’s difficult for the patients to accept surgical intervention because of more invasion and higher cost. Endoscopic treatment technologies such as Endoscopic Mucosal Resection (EMR), Endoscopic Submucosal Dissection (ESD) can be effectively treated tumors which derived from the mucous membrane layer and part of submucosa and Endoscopic Submucosal Excavation (ESE) is used for removal tumors derived from the muscularis propria which is just an extension of ESD technique. For lack of serosal layer, ESE risk high for larger esophagus submucosal tumors, especially for tumors originated from the muscularis propria, because it may lead to perforation, bleeding and other complications. And Submucosal Tunneling Endoscopic Resection (STER) technology [1] can establish tunnel effectively by using the space between submucosa and the muscularis propria, and then resect the tumor completely in the full space without destroying the integrity of the mucous membrane, and so decrease the risk of perforation and gets good operability [2]. STER is a new emerging technology in recent years, our study was to investigate the safety and efficacy of STER in treating esophageal submucosal tumor by retrospectively analyzing.

STER procedure as follows: (1) Transparent cap was added to gastroscopy front, injecting glycerol fructose indigo carmine into the submucosa about 4-6 cm proximal to the lesions at the oral side. (2) Incising mucous membrane by HOOK knife and establishing a submucosal tunnel entrance about 2 cm. (3) Establishing a submucosal tunnel, separating the tumor gradually and stripping the tumor completely by HOOK knife, then taking the mass out with a snare. (4) Endoscopic exit the tunnel, closing the tunnel incision site by hemostatic clamps (Figure 1). 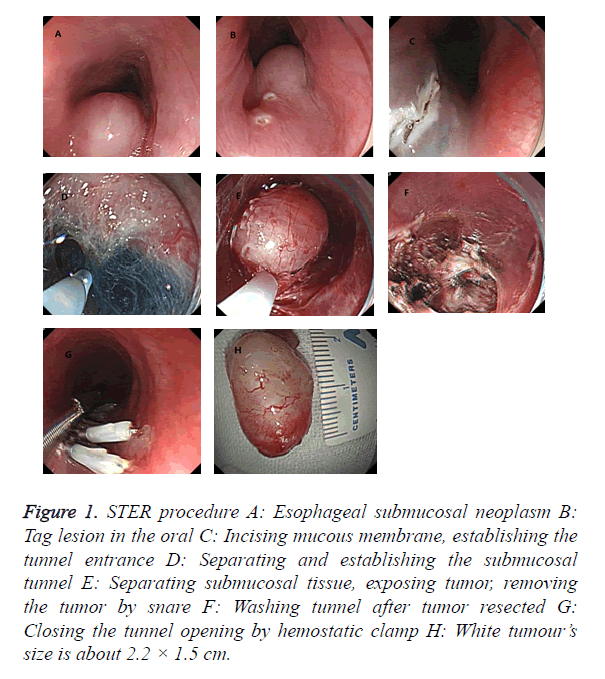 ESE procedure: (1) Installing the transparent cap to the upper front and marking the tumor edge with argon knife. (2) Injecting submucous multipoint along the side of the tag with a mixed solution of epinephrine, methylene blue and glycerol fructose. (3) Cutting the mucous membrane along the tumor edge with a HOOK knife, cutting submucosa and exposing tumors with IT knife, and removing tumors after it was completely exposed, then closed the incision with clips. The electrocautery was adopted if hemostasis during operation (Figure 2). 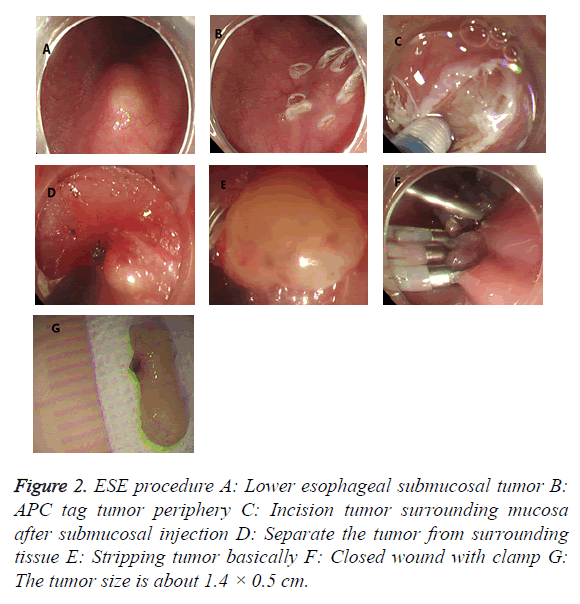 All resection specimens were sent to pathological examination. It was necessary to retain the gastrointestinal decompression tube, fasting 1-3 d and monitor vital signs such as chest pains, breathing difficulty, fever, subcutaneous emphysema abdominal pain and dark bowel. Proton pump inhibitors and antibiotics were applied regularly, and proton pump inhibitors were applied 4 to 6 w after discharge. Gastroscope and ultrasonic gastroscopy were carried out 3 to 6 months after operation to observe wound healing, residual tumor and recurrence, and so on.

Table 2. Comparison of two groups in incidence of complications.

The postoperative pathology and follow-up

Three month later, 2 groups of patients were reviewed with gastroscopy or Ultrasonography (EUS) and no residual tumor or relapse or narrow were found.

Gastrointestinal submucosal tumor mainly refers to the following tumor which originated from mucous membrane layer, the submucosa and muscularis propria. Esophageal submucosal tumors are usually benign lesions. Leiomyoma is the most common. Generally, it hasn’t obvious clinical symptoms and happen been found by endoscopic examination. Some bigger tumors may cause obstruction symptoms, and those tumors derived from gastrointestinal mesenchymal tissue have malignant potential, follow-up or actively processing were recommended, if the tumor is greater than 2 cm, it is recommended removal [3]. Usually, surgical resection could made definite effect, but it maybe has large trauma and high risk, and subsequent high incidence of complications frustrated us. With the development of endoscopic techniques, endoscopic treatment field gradually widened, ESE and STER were all used for submucosal tumors recent years.

In 1996, Gotoda first removed mucosal lesion completely through IT knife and named Endoscopic Submucosal Dissection (ESD) [4], initially it is used for removal of mucosa lesion larger than 2 cm in diameter. Later, Pinghong [5] put forward resecting submucosal tumors with ESD technology and called it Endoscopic Submucosal Excavation (ESE), which was applied for submucosal tumors derived from muscularis propria [6]. Multicenter study abroad [7] showed that the en bloc resection rate of ESD achieve 96.7% and the incidence rate of perforation 5.25%. While [8] reported that intraoperative hemorrhage rate of stomach ESD was 12% (20/167), delayed hemorrhage rate was 1.8% (3/167). For larger tumors (>2 cm) from esophageal muscular propria, ESD wound closed more difficult, also the risk of perforation and bleeding increased, especially pneumothorax. Submucosal Tunneling Endoscopic Resection (STER) technique developed on the basis of the Peroral Endoscopic Myotomy (POEM) and was applied to submucosal tumors resection, which was first reported by Xu [1] in 2011. The technique establishes an artificial tubular tunnel in the digestive tract between mucosa layer and muscular propria by endoscopy, then diagnosis and treatment in the submucosa, muscular propria serous layer was implanted in the tunnel. This method makes the esophagus mucous membrane incision and the surgical wound is not in the same level, which can not only resect of the tumor completely, but also maintain the integrity of the mucous membrane, then avoid damage to nearby tissue and organs and reduce the possibility of delayed perforation. Due to the tunnel space can up and down extension, operation can be done smoothly and fast and perforation risk reduced significantly compared with ESE.

Our study stated that tumor size will affect the operation choice, STER group’s tumor is greater than the ESE group, also illustrated that the ESE is unfavorable for larger tumors. Restricted by esophageal tunnel space, it is difficult to operate if tumor diameter is more than 3 cm, but in STER group the biggest tumor resected is about 5.5 × 3.5 cm, which broke the general scholar’s view that STER is mainly suitable for the tumors whose diameter is about 3.5 cm or less [9]. Second, the middle and lower esophagus have high tumor incidence, tumors location affect operation choice. If tumors located upper esophagus especially less than 20cm from incisors, submucosal tunnel is difficult to build and ESE is preferable. If tumors position is low and lies in the border between cardiac stomach bottom, ESE often have residual tumors and operation difficulty is bigger because tumors at this position often extends to the bottom of the stomach which lobulated or have pseudopodia, and STER is preferable. Our research showed that STER patients’ incidence of fever, subcutaneous emphysema and pneumothorax were slightly lower compared with ESE group, the incidence of postoperative fever and subcutaneous emphysema of the upper esophageal submucosal tumors is higher than the middle and lower esophagus, whose cases were of small size.

As other microscopic minimally invasive treatment, STER also has some common complications such as mediastinum and subcutaneous emphysema, pneumothorax, pneumoperitoneum, bleeding, perforation, secondary infection, and so on. Esophageal lacks of serous layer, outer longitudinal muscle and outer membrane were liable to be damaged when separating the basal part of the tumors derived from the muscularis propria, and may result in such complications as subcutaneous emphysema, pneumomediastinum or pneumothorax, etc. Also, some tumors located in the deep muscularis need full thickness resection and hard to avoid perforation. Due to the tunnel entrance and surgical wound is not in the same level, we clip the entrance of the tunnel when perforation happened and full thickness perforation wouldn’t generally appear. Our study showed 9 cases of postoperative fever, some cases of pneumothorax, subcutaneous emphysema and free gas under diaphragm, who recovered by conservative treatment, no severe perforation and other complications happened. Using CO2 gas pump infusion, for CO2 is normal metabolism product and can quickly be absorbed in the organization whose absorption rate is about 150 times that of air, so the clinical symptoms of subcutaneous emphysema, pneumothorax and pneumoperitoneum can be recovered quickly after surgery [10,11].

STER, ESE are all the effective and safe minimally invasive treatments for resecting upper gastrointestinal submucosal tumors, and STER has an advantage in large submucosal tumor resection because it can maintain the integrity of the digestive tract mucosa and reduce complications. But STER is a new technology appearing in recent years and there may be deviation in the data because of the limited sample size. We look forward to multicenter, large sample research which can provide more reliable data for clinical work.