Cleidocranial Dysplasia is a rare autosomal dominant disorder affecting skull, jaws, teeth, clavicle along with other skeletal abnormalities. It is noteworthy that the case of a 28-year- old male reported here concerns the dental surgeon as it deals with high number of impacted and supernumerary teeth as well as additional unusual findings such as elongation of coronoid process and rounded gonial angle that make it quite peculiar

Cleidocranial Dysplasia also known as Marie and Sainton’s disease is a rare autosomal dominant disorder affecting bones and teeth [1,4]. It affects men and women with equal frequency [1,2,4] and is characterized by abnor-malities of skull, dentition, jaws and clavicle. It is seen that the fontanel are open despite the age of the patient being far beyond the normal closure time [1-6]. In our patient there were 64 teeth and such a high number has been reported in rare instances along with deepening of mandibular notch. In addition to this concave profile due to under developed maxilla [9], a brachycephalic skull has also been reported [7,9]. The bridge of the nose was broad and depressed. The mandible appears to be prognathic with a depressed forehead.

A 28-year-old Asian male of Indian origin was reported to the Department of Oral Medicine and Radiology of Jaipur Dental college, University of Rajasthan, on June 15, 2005. His chief complaint was missing teeth and he de-sired removable prosthesis. He gave the history of falling of teeth few years back. Upon general examination, he was of average height and his gait showed deviation from normal. It was found that he had depression in forehead and it extended as a groove between two parietal bones up to the occiput (Fig. 1). The skull was brachycephalic. The midface was depressed because of underdeveloped maxilla, so the mandible appeared prognathic (Fig. 2). The patient gave history that his mother had same kind of scalp and facial profile. The patient had abnormal movement of right shoulder and the right side of clavicle exhibited mobility on manipulation (Fig.1). His long bones of the limbs & bones of digits showed bowing (Fig. 3). 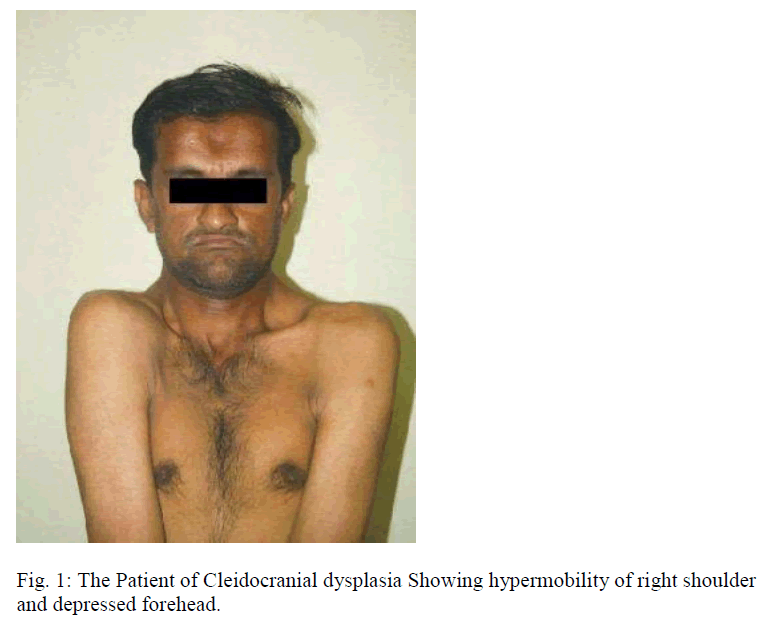 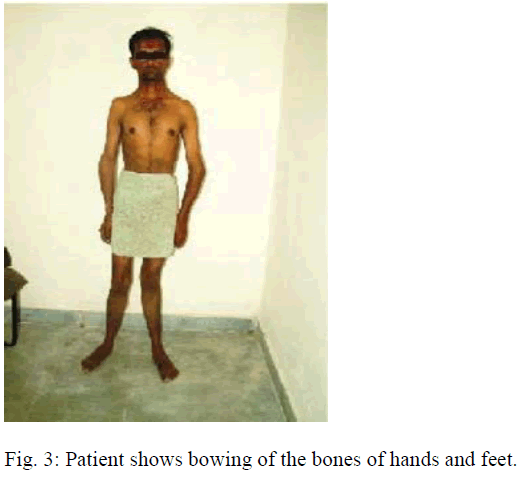 Figure 3: Patient shows bowing of the bones of hands and feet.

His intra oral examination revealed presence of the following teeth in the oral cavity,

of which root stumps of

were seen The supernumerary teeth seen in between 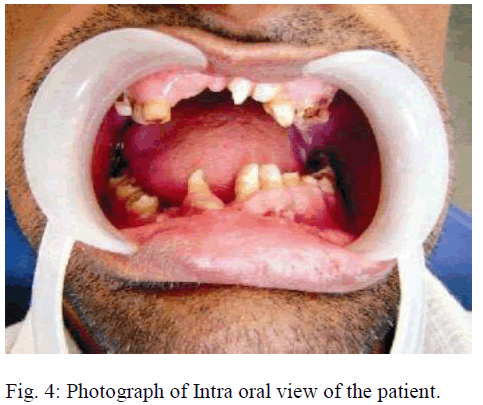 Figure 4: Photograph of Intra oral view of the patient.

Further the orthopantomogram outlined the presence of total 64 teeth in both the jaws. Out of these, 39 were im-pacted and supernumerary and 25 were seen in the oral cavity. The mandibular notch showed excessive deepening causing the elongated appearance of coronoid process (Fig. 5).

Figure 5: Panoramic radiograph shows remarkable number of Supernumerary and malposed teeth, deepening of mandibular notch and lack of definition of neck of condyle.

The gonial angle appeared extremely rounded and lack of definition of the neck of condyle (Figs. 5,7). 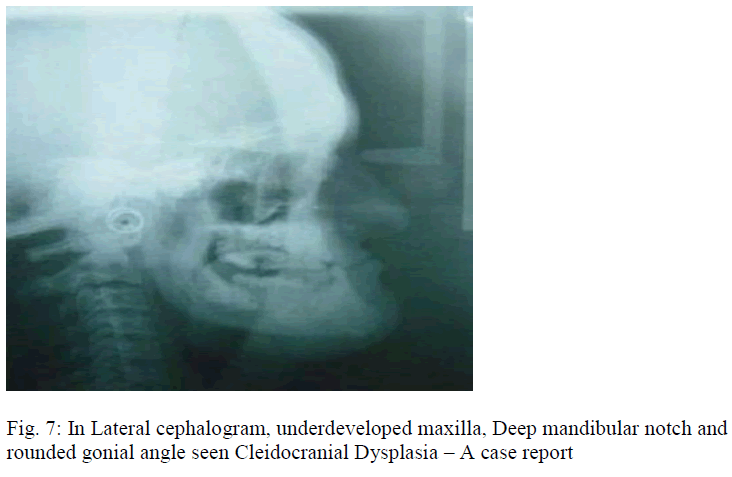 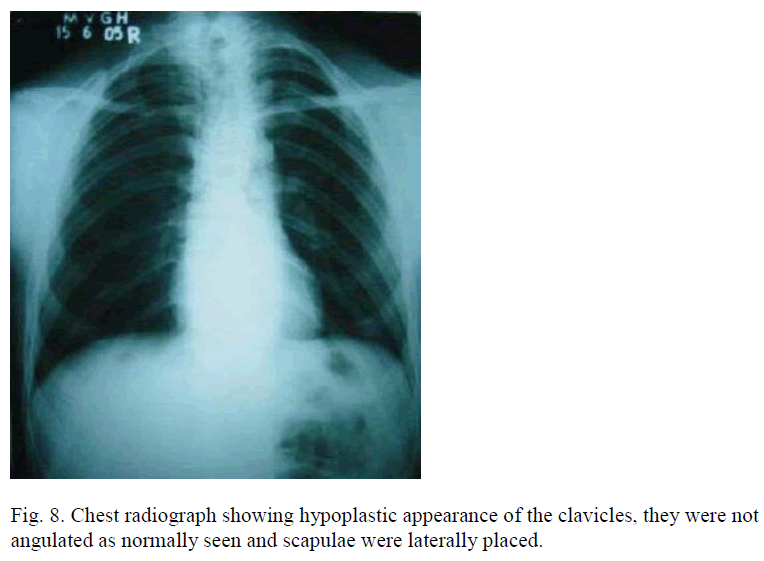 Figure 8: Chest radiograph showing hypoplastic appearance of the clavicles, they were not angulated as normally seen and scapulae were laterally placed. 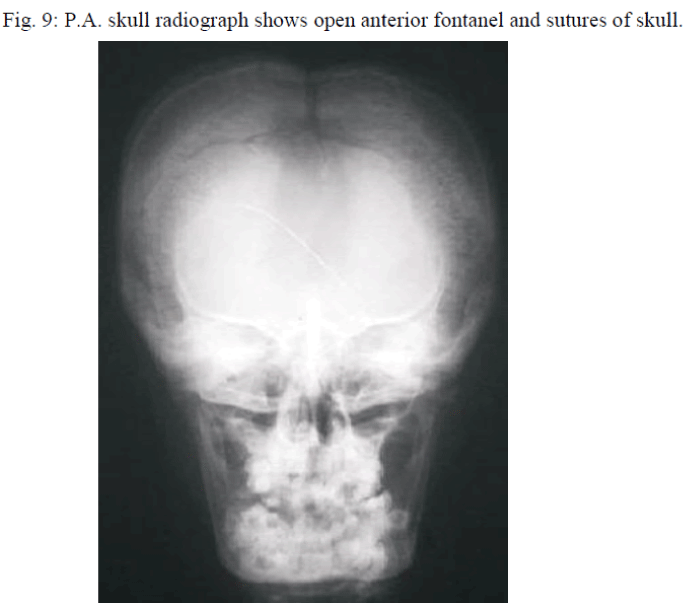 In posteroanterior radiographic view of chest the scapulae were laterally placed, clavicles were not angulated as normally seen. The right side of clavicle appeared hypoplastic as compared to left side (Fig.8).

Our observations in this case are the presence of excessive number of supernumerary teeth in the maxillary mo-lar region and mandibular premolar region in Cleidocra-nial Dysplasia syndrome [2,9,10]. The latter resemble the premolar teeth. The total number of teeth were 64, that was in extremely high number [2,9-11]. As mentioned in previous cases, the fontanels were also open although the patient was in his late twenty years [1,5,7,8] i.e. 28 years old.

Along with this, an unusual finding encountered was the deepening of mandibular notch hence elongated appearance of coronoid process of the mandible. The gonial an-gle was rounded off. There was lack of definition of the neck of condyle. The normal constricted appearance of condyle was absent. In this case the clavicles were present but not formed to the full extent, the hypermobility was found in the right shoulder to a greater extent as compared to the left [8,10].

This article presents a 28 year old male suffering from Cleidocranial Dysplasia. This patient refused an elaborate surgical correction. In this subject fabrication of prosthe-sis was carried out to replace the missing dentition and advised about the importance of oral preventive care in daily routine. Such patients should be diagnosed at the early mixed dentition stage to render treatment at suitable interval in the form of oro-surgical and orthodontic correction, so that such problems are overcome before adulthood is attained. The followup is essential in such a syndrome in order to check the development of odontogenic cysts etc.

This peculiar case has been reported to focus on the unusual findings so that the medical and dental professionals become familiarize with such features on confronting subjects with Cleidocranial Dysplasia.