Clear cell carcinoma in lung is an extremely rare subtype of lung tumors; first described by Liebow and Castle man in 1963 and since only 60 cases have been reported in the literature. CCLC (Clear cell lung carcinoma) was considered by the 2011 WHO classification of lung tumors as a rare cytologic feature of squamous cell or adenocarcinomas. We describe a rare case of a clear cell tumor of the lung, in a 63 year-old male patient, and a brief literature review. The main of this presentation is to emphasize the importance of a multidisciplinary approach including pathologists, oncologists and radiologists to confirm the diagnosis as well for an adequate therapeutic management of this unusual entity of lung cancer.

Clear cell carcinomas are common finding in renal, ovarian and uterine tumors, but exeptionally in lungs; these tumors are characterized by a clear appearance of the cytoplasm, resulting from the accumulation of glycogen, hence the name of “sugar cell tumors”. Clear cell lung cancer presents a real problem of histological classification: it was considered as a separate histological entity, until the committee of the International Association for the Study of Lung Cancer (IASLC), American Thoracic Society (ATC) and European Respiratory Society (ERS) removed it from the sub -types of pulmonary adenocarcinoma in 2011; [1] The World Health Organization (WHO) in 2015 also discontinued the CCLC subtype and recognized it as a cytological feature [2,3].

Due to its rarity, the clinical and epidemiological characteristics of CCLC are not well determined ; based only on the cases reported in the literature ,we can deduce that this tumor is usually seen in the elderly age, in both sex comparatively [4]; symptoms are non-specific, such as fever, chest pain, cough, chest tightness and haemoptysis [5,6].

In this article we report a rare case of metastatic clear cell mediastino-pulmonary carcinoma to describe the histological characteristics of this pathological entity as well as the therapeutic management.

We present the case of a 62-year-old patient with a history of chronic smoking (30 pack-years), pulmonary tuberculosis 16 years ago cured. The patient presented for 3 months a chest pain and recurrent hemoptysis which prompted his consultation ; a thoracic CT scan objectified a Locally advanced mediastino-pulmonary tumor process poorly limited, hypodense, is enhanced in a heterogeneous manner after contrast delimiting areas of necrosis measuring 7.6 × 6 × 8 cm ; with secondary mediastinal lymph nodes and bilateral Lung micro nodules.

The lesions were inaccessible for a biopsy hence the performance of a mediastinoscopy with biopsy of mediastinal lymph nodes; Microscopic examination revealed a rounded cells with abundant clear cytoplasm (Figure 1); the immunohistochemistry was positive for CD10, CK AE/AE3 (Figure 2), EMA and but negative for CK 7, CK20, TTF1 et P40 ; the diagnosis of lymph node metastases of renal, prostatic or hepatic origin were also suspected. 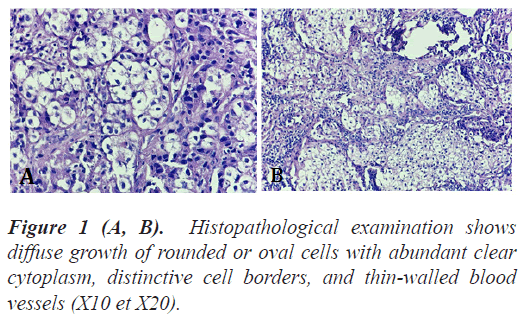 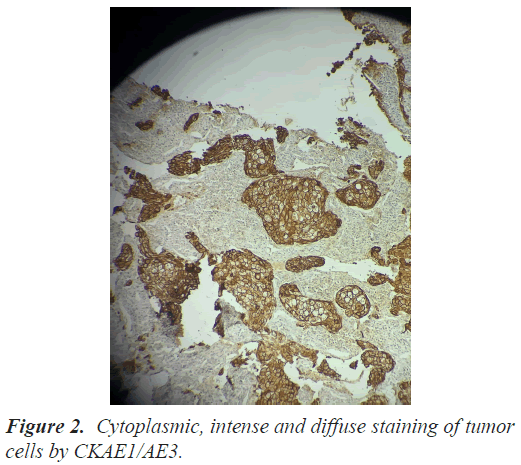 A body CT scan revealed: a Small secondary left temporal brain lesion of 4 mm and a left adrenal secondary lesion of 4cm without kidney damage, also no hepatic or prostate tumor detected. So After having excluded the differential diagnoses, based on imaging which detected no other primitive tumor, and considering the different clinical radiological and immuno histochemical arguments; we opted for the diagnosis of an advanced clear cell lung carcinoma metastatic at the cerebral and adrenal level.Palliative chemotherapy based on the carboplatin paclitaxel doublet with bevacizumab was indicated in this patient.

Though clear cell carcinoma is very rare in the lung ; more frequent in the ovarian and renal cancers, The presence of a clear cell component in pulmonary carcinomas, however, does not constitute a specific clinicopathologic entity; rather, clear cells should be considered a histopathologic feature that may be present in many tumors, including adenocarcinoma, large cell carcinoma, and squamous cell carcinoma [6]; But Recent histological classification considers CCLC as a distinct subtype and recommends to report it as an associated cytologic change based on lack of its clinical significance [2,3].

The symptomatology is generally poor, it’s correlated with tumor size which can range from 1 mm up to 12 cm in size in the various cases reported, in our case the patient was very symptomatic given the significant mediastinal invasion, to note that, this loco regional extension is exceptional in CCLC, in the literature, CCLCs are usually distributed in the lower lobe of both lungs, unrelated to major bronchi and vessels [7].

The diagnosis of CLCC is histological but radiology also has an interesting place, it has been shown that the CT scan with contrast plays an important diagnostic role, In fact, an intense heterogeneous enhancement in the arterial phase and washing in the late phase is a common finding [3]. In our case report, the chest CT confirmed this radiological appearance.

Histologically, these tumors are composed of mitotically inactive round or oval cells with a clear or granular eosinophilic cytoplasm, with characteristic thin-walled sinusoidal vessels in between [8]. PAS staining shows glycogen granules in the cytoplasm of these clear cells [9]. However; Immunohistochemistry is the key element to rule out differential diagnosis such as metastatic renal cell carcinoma or other clear cell carcinoma subtype of different lung cell types, CCTL is characterized by the presence of immuno reactivity for CD10, CK and EMA [10,11]. In our case, the diagnosis was based on the typical histological picture of the tumor: positivity for CD10, EMA, CK AE/AE3 and negative for TTF-1. And because of its rarity, a histological re-examination was requested to confirm the diagnosis.

Regarding treatment, it has been shown that resection should be a first line of treatment, if possible; if the disease is non-metastatic, lobectomy and pneumonectomy are suggested, even for recurrent patients. The literature suggests that CCAL patients who received lobectomies after tumor recurrence were alive and tumor free after diagnosis [12,13]. Adjuvant therapy has never been applied to cases reported; it is reserved for cases of incomplete resection, unresectable tumors. For metastatic forms, palliative chemotherapy indicated according to the international guidelines of non-small cell lung tumor, our patient received chemothrapy based on carboplatine and paclitaxel.

Les CCLC are rare, diagnostic features of this entity are not widely known and this usually leads to misdiagnosis; more studies are needed to further studies are needed to establish management and guidelines. The search for genetic mutations could be a good lead in order to seek potential therapeutic targets as is the case for other subtypes of lung cancer.