Desmoid tumors pose a number of unique challenges to treating physicians. They have an unpredictable clinical course, aggressive nature, and predilection for recurrence after resection. They frequently develop in areas of previous trauma and have also been thought to be sensitive to hormonal stimuli. Conservative management is often recommended as a primary therapeutic option. Surgery becomes necessary for those patients with symptomatic and/or progressively enlarging lesions. Complete resection is often considered the “gold standard”, but surgeons should always consider minimizing morbidity and maximizing function. There are a limited number of reports in the literature describing desmoid tumors after solid organ transplantation. Here, we report a 66-year-old gentleman who was found to have a mass on his right chest wall two years after lung transplantation. The patient was initially monitored with serial radiographic imaging. Rapid growth prompted a tissue biopsy, revealing a desmoid tumor. Continued expansion and invasion of the lesion into the surrounding osteocutaneous structures required surgical intervention. En bloc resection of the mass with immediate chest wall reconstruction was performed. New lesions developing after transplantation must be monitored with scrutiny. Desmoid tumors, though rare, should be considered in this differential diagnosis. Early diagnosis may decrease patient morbidity by reducing the extent of resection.

Desmoid tumors are an uncommon malignancy accounting for less than 3% of all soft tissue masses [1]. These tumors are known to be locally aggressive with a high incidence of recurrence, but no predilection for metastases. Affected individuals commonly fall between the ages of 15 and 60, with females being more likely to develop desmoid tumors than men. Risk factors for developing desmoid tumors include prior trauma to the involved area, pregnancy, Familial Adenomatous Polyposis (FAP), and Gardner syndrome. Roughly 5-15% of desmoids occur with FAP and Gardner, while the remainder occur sporadically in the population [2,3].

Sporadically occurring tumors tend to involve an extremity or the trunk, while FAP associated desmoids favor an intra-abdominal location [3]. In this study, we describe the first desmoid tumor involving the chest wall after double lung transplantation. We also briefly review the literature on current treatment trends for desmoid tumors and chest wall reconstruction.

A 66-year-old gentleman with a past medical history of bilateral lung transplantation, secondary to severe emphysema and chronic obstructive pulmonary disease, presented to the plastic and reconstructive surgery service with a new right chest wall mass. His transplantation was performed two years prior and was uneventful. His post-transplant immunosuppressive therapy consisted of prednisone, mycophenolate, and tacrolimus. Serial radiographic studies, Pulmonary Function Testing (PFT), and bronchoscopy evaluations revealed preserved function and no evidence of rejection (Figure 1A). At his one-year follow up, a Computed Tomography (CT) scan was ordered. This revealed a new unusual, ovoid pleural density between the anterior right 3rd and 4th ribs measuring 2.8 × 1.0 cm (Figure 1B). Observational follow up with serial CT scans was recommended after a multidisciplinary discussion. 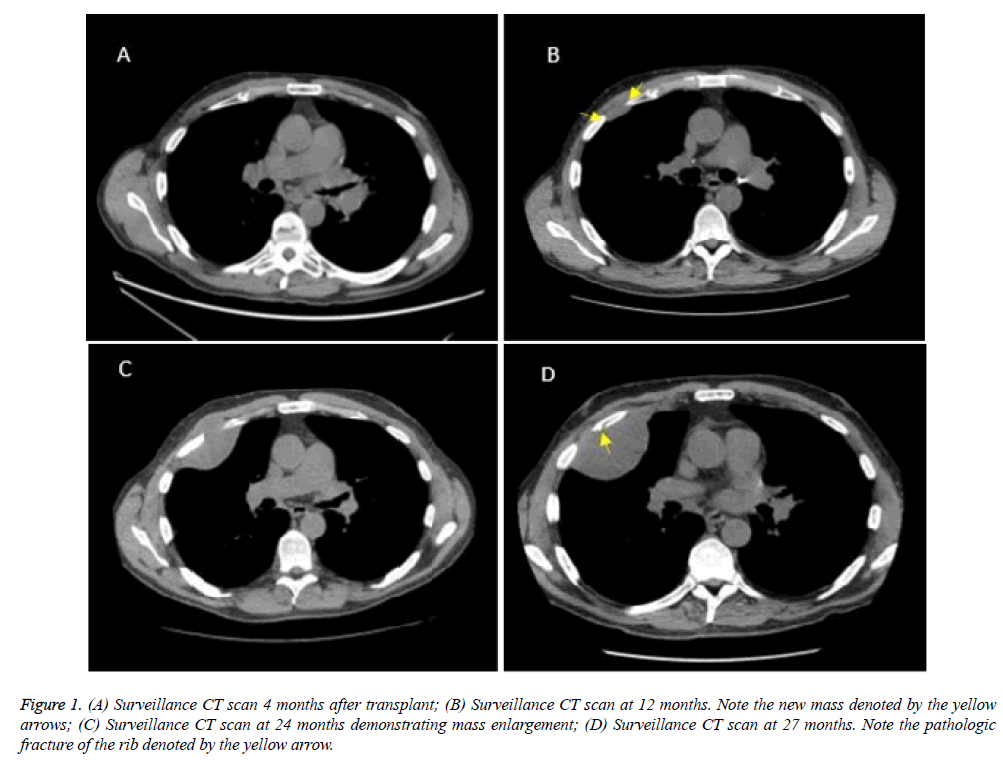 The mass was now causing contour irregularities in the right fourth rib and extending in the surrounding chest wall. Given the progression of the lesion, a CT guided biopsy was obtained. Final pathology revealed desmoid-type fibromatosis (Figure 1C). A Magnetic Resonance Imaging (MRI) study was ordered to better delineate the tumor. An additional CT scan was ordered one month after the MRI to check for tumor progression. The desmoid tumor had grown to 8.6 × 5.9 cm and caused a pathologic fracture of the fourth rib (Figure 1D).

Subsequently, the desmoid tumor was removed en bloc (Figure 2A-D). The resulting 15 × 15 cm chest wall defect was reconstructed with a lightweight polypropylene mesh and chimeric latissimus-serratus anterior muscle flap (Figure 2E and 2F). The patient recovered well from surgery and was discharged home after a two-week hospital stay. Chest tubes were removed prior to discharge and all surgical drains were removed by three weeks postoperatively. Repeat CT scan three months after reconstructive surgery demonstrated no recurrence of the tumor and an intact reconstruction of the right chest wall (Figure 3). Postoperative PFT confirmed no change from preoperative baselines. The patient continues to be closely followed to monitor his transplantation and for desmoid recurrence. 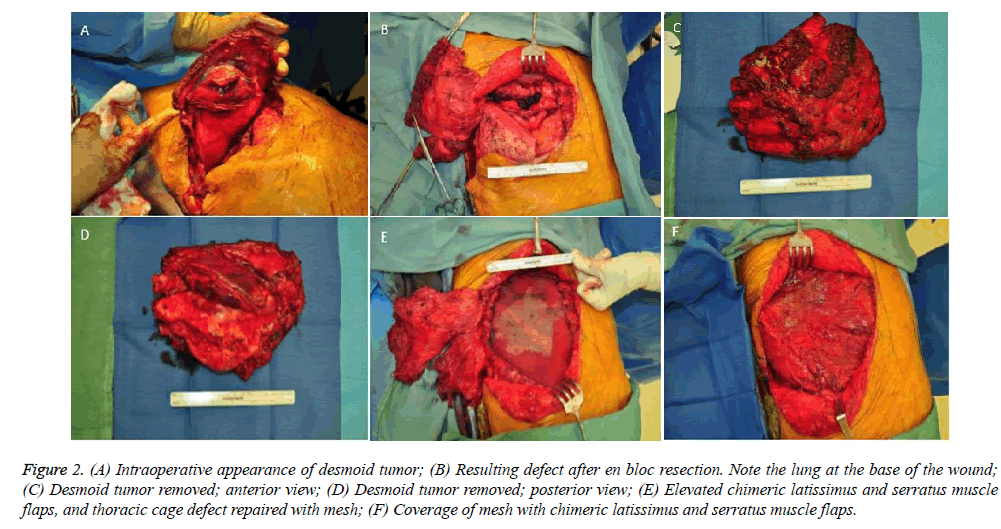 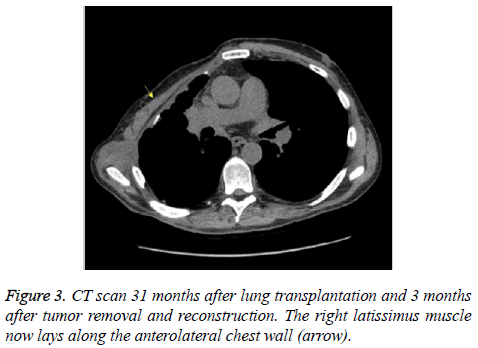 Desmoid tumors, or aggressive fibromatosis, are an uncommon malignancy. Though they do not metastasize, their local aggressiveness often results in the destruction of the surrounding skeletal and soft tissue structures. The underlying pathophysiology of desmoid tumors is still incompletely understood. Increasing evidence points to involvement of the Adenomatous Polyposis Coli (APC) gene and beta-catenin (both components of the Wnt signaling pathway) in the molecular pathogenesis of desmoids both in Gardner syndrome, as well as in sporadic desmoids [4]. Desmoids in Familial Adenomatous Polyposis (FAP) arise from APC inactivation and subsequent accumulation of beta-catenin in cells [5]. In contrast, APC mutations are uncommon in sporadic desmoids, which usually arise from mutations in the gene for beta-catenin, CTNNB1 [4].

Desmoid tumors have variable clinical behavior causing patients to present with a broad range of signs and symptoms. Many patients note a lesion that has gradually enlarged overtime. In non-FAP-associated cases, the most commonly involved areas are the shoulder girdle, hip-buttock region, and the extremities, where the location is usually deep in the muscles or along fascial planes [3,4]. Desmoid tumors may be multifocal at one site, typically the extremity, but they rarely occur at different regions in the same patient [4]. For those with tumors in the extremities, neurovascular changes and edema may be present depending on the size and location on the limb. Intra-abdominal desmoids may cause intestinal obstruction, ischemic bowel, or other non-intestinal organ dysfunction [3]. In the case of intrathoracic tumors, symptoms may not be noticed until the tumor invades bony or vascular structures, or compresses the adjacent lung.

Radical primary surgery has fallen out of favor because of recurrence rates as high as 60% [12]. Treatment of most desmoid tumors now involves an initial period of observation. This passive “wait and watch” approach has been advocated by several studies [13-16]. Consensus-based guidelines from the National Comprehensive Cancer Network (NCCN) also suggest observation as a primary therapeutic option for patients with desmoid tumors that are potentially resectable but asymptomatic, non-life threatening, and not causing significant impairment [17]. For patients with unresectable or recurrent disease, hormonal therapies, nonsteroidal anti-inflammatory drugs, interferon, chemotherapy, and radiation therapy are alternative options [18,19].

Surgery becomes necessary for symptomatic patients, those with progressively enlarging tumors, or if the tumor creates cosmetic concerns. Complete resection of chest wall desmoid tumors with negative microscopic margins is the standard surgical goal [20-23]. Surgical margins of 2-4 cm with en bloc removal are advocated. An optimal full-thickness resection includes one unaffected rib above and below the lesion, as well as the intercostal muscles, pleura, and a wide clear margin of adjacent soft and osseous tissues [21,22,24]. Postoperative radiation does not seem to reduce recurrence rates [21,23]. Abbas et al. has documented that positive margins at resection, reoperation, and postoperative radiation are associated with a higher risk for recurrence.

Surgical reconstruction after thoracic desmoid resection is not uncommon. Reconstruction should provide stability, maximize physiological movements, avoid paradoxical motion, and create an airtight seal [25-27]. It should also protect intrathoracic structures and restore respiratory function [25]. Depending on the size of the surgical defect, reconstruction options vary from simple skin grafting and soft tissue manipulation to more complex flaps. Skeletal reconstruction is recommended when four or more consecutive ribs or 5 cm or more of lateral chest wall are resected [25-29]. As many as five ribs may be resected in patients who have undergone radiation therapy before reconstruction is considered because increased fibrosis produces chest wall stiffness. Posterior chest wall defects may not require bony reconstruction as the scapula provides additional support to the posterior thoracic cage.

Skeletal stability can be restored with bone grafts or vascularized bone, though there is associated donor-site morbidity. Alternatively, the chest wall can be stabilized with a Gore-Tex patch, Prolene or Marlex mesh, AlloDerm (decellularized human cadaveric dermis), or composite Marlex mesh and methylmethacrylate sandwich [25-29]. Each of these alloplastic materials must then be covered with healthy, well-vascularized soft tissue. The latissimus dorsi is most commonly used for these wounds, as a muscle or musculocutaneous flap [25,27,29]. Other pedicle flaps used for anterolateral chest soft-tissue reconstruction include omentum, rectus abdominis muscle or musculocutaneous flap, pectoralis major, external oblique, and the transverse thoracoabdominal flap. The use of these muscles and musculocutaneous flaps for soft tissue coverage has been shown to have minimal impact on activities of daily living, respiratory mechanics, and shoulder girdle stability. They may even improve PFTs when used in isolation for chest wall reconstruction [25].

Keeping in line with current guidelines, this patient was initially treated with a trial period of observation. Progression of the tumor into the adjacent ribs and soft tissue required a reassessment of his treatment plan. After confirming the diagnosis of a desmoid tumor, we adhered to the principles laid forth by Abbas, Kabiri, Ma, and Mátrai, and executed an en bloc resection of the mass. An appropriate full thickness resection was performed according to the margins described by Abbas and Dashiell.

Concurrent with chest wall reconstruction literature, the integrity of the thoracic cage and overlying soft tissue was restored. A synthetic mesh was selected for this case, minimizing patient donor site morbidity and ensuring a rigid chest wall reconstruction. Given the size of our patient’s defect, a chimeric latissimus-serratus anterior muscle flap was elevated for soft tissue coverage. The addition of the serratus anterior muscle provided complete coverage of the mesh and limited patient morbidity from further incisions. Musculocutaneous flaps were not needed as there was no shortage of skin.

The views expressed in this manuscript are the authors’ own and not an official position of the institution. Authors had freedom of investigation and full control of the design of the study, methods used, outcome parameters and results, analysis of data, and production of the written report.

No funding was given for this manuscript.

The authors have no financial or industrial disclosures.