Case Report: An unusual observation of elastophagocytosis in a patient with cutaneous CD5+ diffuse large B cell lymphoma.

A Japanese man in his mid-60s reported having a subcutaneous mass for a period of 8 months, after which it gradually enlarged in size and was surgically extirpated. The resected tumor was 10 × 8 mm in size, and the cut surface was smooth, solid, and whitish. Histological analysis revealed the presence of medium to large lymphoid cells that had proliferated to form a solid mass. The diffuse proliferating cells stained positive for CD20, CD79a, and CD5, but were negative for CD3, CD30, and CD10, and the MIB-1 index was very high. On the basis of these findings, the tumor was diagnosed as cutaneous CD5+ diffuse large B cell lymphoma. Interestingly, detailed analysis revealed elastophagocytosis, with scattered, fragmented elastic fibers engulfed by macrophages that were intermixed with tumor cells. These macrophages were mostly multinucleated giant cells, apparently forming part of a foreign body-type reaction. Elastic fiber staining clearly revealed positively stained fragmented fibers in the cytoplasm of the macrophages, which were densely positive for CD68, in sharp contrast to the CD68-negative tumor cells. The final diagnosis was cutaneous CD5+ diffuse large B cell lymphoma exhibiting unusual elastophagocytosis. The patient’s clinical course was good, and the tumor disappeared completely after 3 cycles of rituximab, cyclophosphamide, doxorubicin, vincristine, and prednisone (R-CHOP) therapy with radiation.

Diffuse large B cell lymphoma (DLBCL) is a common form of B cell lymphoma with a number of subtypes, one of which is CD5-positive (CD5+) DLBCL [1]. This subtype is reported to account for 5% [2] to 7.2% [3] of all DLBCL cases and is associated with a poor prognosis and high recurrence rate [2,4]. During the histopathological investigation of a case of cutaneous CD5+ DLBCL, we noted an unusual observation of elastophagocytosis (EPC) involving multinucleated macrophages intermixed with lymphoma cells. Generally, EPC is observed in nonmalignant cutaneous diseases such as actinic granuloma [5], mid-dermal elastolysis[6], upper dermal elastolysis[7], granulomatous inflammation adjoining atypical fibroxanthoma [8], persistent reticulate erythema[9], sarcoidosis[10], cutaneous elastolytic granulomas [11], reticular erythema with focal mid-dermal elastophagocytosis [12], extragenital lichen sclerosus [13], and annular elastolytic giant cell granuloma [14]. With respect to the lymphoid malignancies, to date, only two cases of granulomatous mycosis fungoides have been reported [15,16]. Here we report a rare case of cutaneous CD5+ DLBCL exhibiting EPC.

The patient was a Japanese man in his mid-60s who had noticed a gradually enlarging mass in his left shoulder region, which was subsequently resected. The excised mass was fixed in 10% formalin solution and embedded in paraffin. Dewaxed sections were stained with hematoxylin and eosin and Elastica van Gieson (EVG) stains.

Immunohistochemical staining was performed as described previously [17,18], using labeled streptavidinbiotin complex 2 kit/horseradish peroxidase (DakoCytomation, Kyoto, Japan) with diaminobenzidine as the substrate and specific antibodies as listed in Table. Written informed consent was obtained from the patient, and his identity has been strictly protected.

Table 1: Antibodies used in this study

Tumor cells had proliferated to form a dense mass, consisting of medium to large-sized lymphoid cells (Figs 1 and 2). Interestingly, multinucleated macrophages engulfing elastic fibers were occasionally detected (Fig 3), which were positive on EVG staining (Fig 4). CD68, a macrophage marker, was strongly positive in the cytoplasm of these macrophages, but not in that of the fragmented elastic fibers (Fig 5). EPC were detected both within and around the tumor, as revealed by EVG staining. Tumor cells were positive for vimentin, CD79a (Fig 6), CD20, and CD5, and notably, the non-malignant T cells were negative for CD5 (Fig 7). The MIB-1 index was very high (Fig 8). Tumor cells were negative for CD3, CD10, CD30, CD45RO, and S-100 protein. 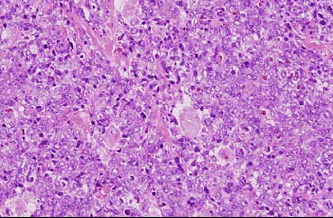 Figure 1: Low magnification view of the resected tumor, revealing a solid mass of tumor cells. Hematoxylin and eosin (HE) staining ×40 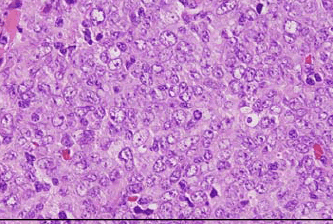 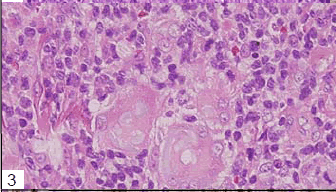 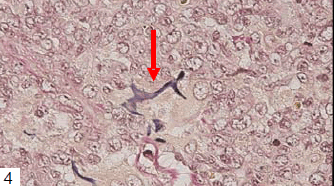 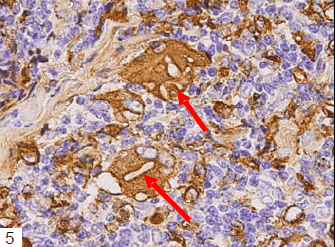 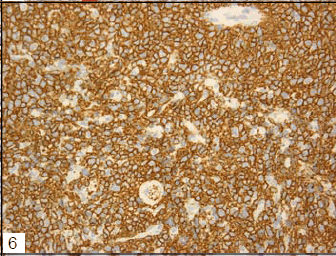 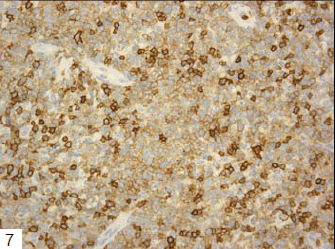 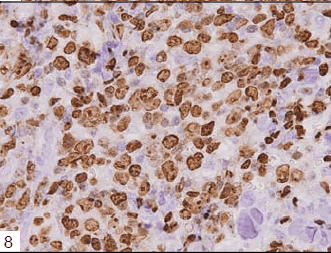 On the basis of these findings, this case was diagnosed as cutaneous CD5+ DLBCL with unusual EPC. CD5+ DLBCL associated with marked EPC is rare. After a final diagnosis had been made, the patient was treated with rituximab, cyclophosphamide, doxorubicin, vincristine, and prednisone (R-CHOP) and radiation. The tumor disappeared completely, with no evidence of a residual tumor on a computed tomography scan, and no recurrence has been noted to date. The patient therefore has a good prognosis.

CD5 positivity defines a subtype of DLBCL with an unfavorable prognosis and a high rate of recurrence [2]. This subtype accounts for 5% of all DLBCL cases [2] and can be further divided into 2 groups depending on whether [1] it develops during the clinical course of chronic lymphocytic leukemia (Richter syndrome) or originates de novo. This subtype is generally found as an extranodal lesion in elderly female individuals and is associated with a poor prognosis[2]. It has been reported to have a cutaneous location in 5% [2] to 7.2% [3] of cases, with no lymph node involvement. Tumor cells and non-malignant, small lymphocytes were intermixed, and both stained positive for CD5. Centroblastic morphology was the most common, and CHOP therapy was effective as in the present case. Complete remission is achieved in 63% of cases, and the 5-year survival rate is 34% in Japan [2].

The significance of EPC remains unknown. It has been suggested that EPC is non-specific [10,13] and that cytokines from inflammatory cells stimulate macrophages, thereby augmenting phagocytic activity [8,19,20]. However, degenerated and fragmented elastic fibers appear to be easily taken up phagocytes, as observed in upper dermal elastolysis [5] and actinic granuloma [7], where elastic fibers disappear in the upper dermis due to EPC [5,7]. Furthermore, in pulmonary ossification [21], altered elastic fibers in blood vessels were mineralized and enriched in both iron and aluminum [21] and were easily phagocytized by macrophages.

In the present case, EPC was mainly found within the tumor mass, where the phagocytic activity of macrophages was probably stimulated by factors released by tumor cells. However, this could not be proved conclusively.

Further investigation of both neoplastic and nonneoplastic cases involving EPC is warranted.

We are grateful to Mrs. K. Matsushita and Ms. K. Takasuka for secretarial assistance.