62 years old male patient, not a known case of diabetes mellitus, or hypertension, with 30 years history of smoking 20-25 cigarettes per day presented with the history of hoarseness of voice for last 6 months, swelling left side neck 6 months and swelling in right lower back for 2 months. Hoarseness was gradually progressive in nature. Swelling left neck was initially painless, small pea sized (<1 cm in diameter) but gradually increased in size (∼3 cm in diameter). Four months before coming to our hospital, patient noticed pain in this swelling. Two months prior to registration, patient noticed a swelling in right lower back initially <2 cm in diameter but gradually progressed in size to about 6-7 cm in diameter. Initially the swelling was painless but, for last 15 days patient complained of pain in swelling, continuous, moderate intensity and piercing in nature, radiating to lower limb due to which patient was unable to walk properly.

A lump was noted in the upper outer quadrant of right hip, single 6×6 cm, firm in consistency, non-tender, with ill-defined margins and fixed to underlying structures. Movements at right hip joint were restricted and painful. 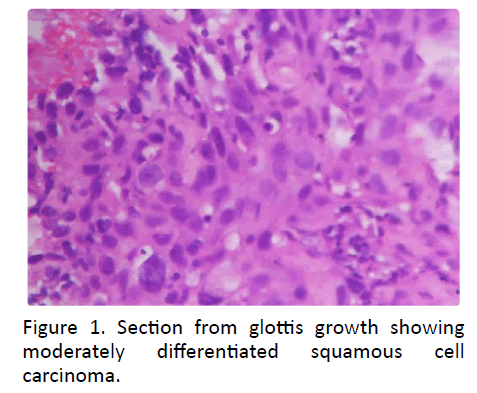 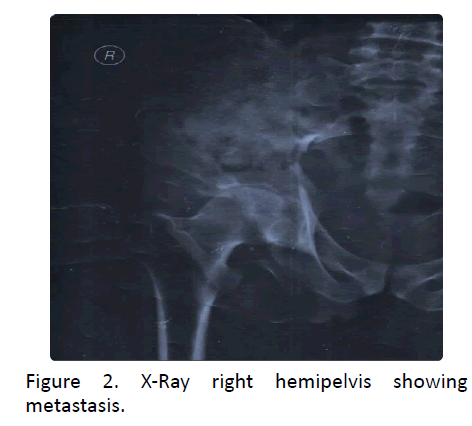 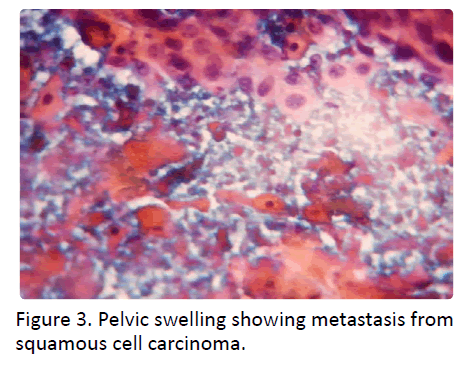 After obtaining consent from the patient, palliative radiotherapy 30 gy in 10 fractions to right hemipelvis was planned. After completion of radiotherapy in December 2013 patient achieved symptomatic relief and in view of good general condition was planned with 30 gy/10 fractions to the primary site and neck nodes.

The reported frequency of distant metastasis in patients with head and neck squamous cell carcinomas has varied widely, ranging between 6%- 43% in autopsy cases and 8%- 17% in clinical studies [1]. A number of factors have been suggested to influence the development of distant metastasis, such as t classification, n classification, nodal level, primary site of disease, and histological differentiation [2,3]. However glottis lesions rarely develop distant metastasis [4]. Lungs are among the most common sites of distant metastasis. There are no studies published in english literature so far demonstrating pelvic metastasis from primary glottis carcinoma. Present case had advanced disease at presentation with moderately differentiated squamous cell carcinoma with evidence of osteolytic pelvic bone metastasis at initial diagnosis. Present case was treated with local radiotherapy which provided effective palliation.

Thus, a strong possibility of distant metastasis should always be considered in symptomatic patients of advanced head and neck cancer.