Aim: The present study was intended to develop some novel imidazole derivatives via multi-component reaction catalysed by Ceric Ammonium Nitrate (CAN) in polyethylene glycol-400 (PEG-400) and its HMG-CoA reductase inhibitory activity for benefit in atherosclerosis.

Methods: The one-pot synthesis has been achieved by taking benzyl, benzaldehyde, 3-amino-1, 2, 4- triazole-5- carboxylic acid (0.01 mol) in PEG-400 with CAN as a catalyst. These derivatives were subjected for anti-oxidant activity using DPPH free radical scavenging assay, together with determination of inhibitory activity against HMG-CoA reductase.

Results: Among the tested compounds, compound 4i was identified as most promising compound exhibiting considerable quenching activity with IC50=3.1 ± 0.7 μM in DPPH assay. The compounds were further screened for HMG-CoA reductase inhibitory activity, where few analogues found to exhibit potent activity.

Conclusion: All target derivatives have may exert beneficial effect in atherosclerosis via inhibition of HMG-CoA reductase together with anti-oxidant activity.

Cardiovascular Diseases (CVDs) account for more than 31% of global death in 2012. It ranked as number one cause of death across the globe and by 2030, and data suggests that over 23 million people will die from cardiovascular diseases each year. Among the diseases affecting the CVDs, Ischemic Heart Diseases (IHD) particularly in the case for acute myocardial infarction, is one of the chief causes of a leading cause of morbidity and mortality. It occurs in numerous array of conditions which including trauma, vascular reflow after contraction, percutaneous transluminal coronary angioplasty, thrombolysis treatment, and organ transplantation [1]. Recent studies suggest that, atherosclerosis is the main cause of IHD and a major cause of Ischemic Stroke (IS), the most common type of stroke. Thus, agents that were used to reduce hypercholesterolemia via inhibition of enzymes necessary for cholesterol biosynthesis deemed advantageous over other agents [2]. Being as a rate-limiting step in cholesterol biosynthesis, the inhibition of Hydroxymethylglutaryl- Coenzyme A (HMG-CoA) reductase causes upregulation of Lipoprotein cholesterol (LDL-c) receptor and makes them easily cleared from the bloodstream [3,4].

The oxidative stress is the major stimulus which arises due to imbalance between oxidant and antioxidant systems of the body favouring the progression of IHD. This leads to the production and accrual of Reactive Oxygen Species (ROS), which includes superoxide anion and hydroxyl radicals [5]. Consequently, use of efficient oxidant which has a capability to cleave ROS has beneficial effect into preventing and delaying the onset of IHD.

Imidazoles have a long history in the medicinal chemistry to act as antitumor, antifungal, cardioprotective, alpha-blocker, CNS-depressants, anticonvulsants, antiprotozoal and anthelmintic agents [6]. Particularly, the pronounced cardioprotective effect of necrostatin-1 (Figure 1), an imidazole derivative, has prompted us to develop some newer imidazole analogues in search of potent analogues [7]. 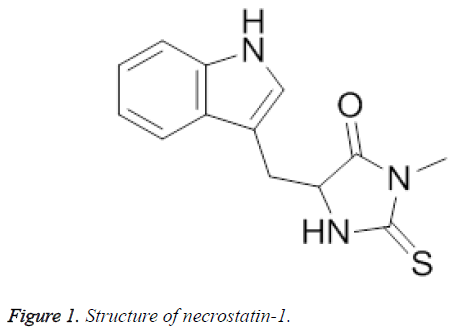 Consequently, the present manuscript deals with the development of some novel imidazole derivatives via multi-component reaction catalysed by Ceric Ammonium Nitrate (CAN) in PEG-400 and subsequently tested for possible pharmacological effect. These types of reactions (i.e., MCRs) are considered as the most influential synthetic tools which enable the medicinal chemist to have access to complex structural motif in easy way. Additionally, these reactions are also deemed environmental friendly because of reducing the number of synthetic steps, waste production and energy consumption. It offers the advantage of simplicity in synthetic work up and efficiency over conventional chemical reactions [8].

All chemicals were of analytical grade and were obtained from Sigma Chemicals, St Louis, USA. Double distilled water was used for all biochemical assays and in respect of statistical analysis the values are expressed as mean ± SE. Unpaired Student’s T-test was applied to test the significance of biochemical data of different groups. Significance was set at P<0.05. The completion of the reactions was monitored by Thin Layer Chromatography (TLC), on aluminium plates coated with silica gel with.

Melting points were measured on a Reichert 723 hot stage microscope, and are uncorrected.

Initially, benzil (0.01 mol), benzaldehyde (0.01 mol), 3- amino-1, 2, 4-triazole-5- carboxylic acid (0.01 mol) in PEG-400 were mixed. To this, CAN (10 mol (%)) was added and reaction mixture was stirred at 50°C for the required time as determined by TLC. After completion of the reaction, the resultant mixture was kept in dry ice-acetone bath to precipitate the PEG-400. The mixture was then extracted with Ether, due to insolubility of PEG-400 which affords the corresponding pure products. The purity of compounds was confirmed on comparing the observed melting point with earlier reported [9]. Results suggest that, the melting point were found in acceptable limits.

Briefly, test compounds (1-50 μM) were mixed with 4 ml of 0.005 mg/ml DPPH methanol solution. The reaction mixture was vortexed thoroughly and left in the dark at room temperature for 30 min. The absorbance of the mixture was measured at 517 nm. Ascorbic acid and BHT were used as references. The ability to scavenge DPPH radical was calculated by the following equation:

It was performed according to the method given elsewhere taking 1-50 μM of compound concentration.

The HMG-CoA reductase inhibitory activity was assayed spectrophotometrically, following the method of Kleinsek et al. [12] whereby the rate of decrease in absorbance at 340 nm due to the oxidation of NADPH was measured. The standard assay mixture contained 0.1 mM HMG-CoA, 0.2 mM NADPH, 0.2 mM KCl, 4 mM EDTA, 10 mM dithiothreitol, and 160 mM potassium phosphate buffer (pH 7.0) in a total volume of 140 μL. The reaction mixture containing the enzyme (100-150 μL) and all components except HMG-CoA were prior monitored to detect any HMG-CoA independent oxidation of NADPH. Before bioassay, the test compounds were dissolved in 0.1 mol/L NaOH/THF (1/1) (during the process, the lactone was hydrolyzed into the sodium salt of dihydroxy acid) and diluted with the buffer.

The role of catalyst in any MCRs is highly significant to catalyse the organic transformations, thus, in present paper, we have used Cerium (IV) Ammonium Nitrate (CAN) as a catalyst. It behaves as electron transfer oxidizing agents to catalyse numerous organic transformations, such as, oxidation, protection, nitration, thiocyanation, cycloaddition, 1, 4- addition, 1, 3-dipolar esterification, and the Hantzsch reaction. It acts via generation of radical intermediates and has been associated with many advantages, such as, admirable water solubility, cost-effectiveness, eco-friendly green nature, ease of handling, high reactivity and convenient work-up procedures [13].

In regard of solvent, PEG-400 as a medium for the reaction has gained attraction from many chemists because of its, high thermal stability and homogeneous phase. It also allows creation of necessary molecular interactions for completion of reaction [14]. Thus, we have used CAN as a catalyst for the synthesis of various imidazoles in the presence of PEG-400. The synthesis of target compounds has been depicted in Figure 2.

Figure 2: Synthetic route for the development of Imidazole derivatives.

Table 2: Effect of temperature on the reaction completiona.

As depicted in Table 3, the entire set of target compounds were synthesized in efficient yield. Among the synthesized derivatives, entry 4a revealed the highest percentage of product formation. Whereas, the presence of electron withdrawing group takes the much longer time to complete the reaction (compounds 4b, 4c and 4g takes 6 h). The product yield and time to complete the reaction was significantly improved in the case of rest of the molecules. It was indicated that compounds containing electron donating groups were found more suitable their electron withdrawing counterpart. Moreover, the melting point of the compounds was found in accordance with earlier reported literatures.

DPPH antioxidant assay: The free radical contributes the pathogenesis of IHDs, thus effective control of these free radicals could be option of worth consideration. Thus, the target compounds were assayed for antioxidant activity in DPPH free radical scavenging assay as showed in Table 4. This assay was based on the determination of the ability of the compound to scavenge free radicals driving the oxidation process. Particulary, 1, 1-Diphenyl-2-picrylhydrazyl (DPPH; I) is a stable free radical and on accepting hydrogen from a corresponding donor, its solutions lose the characteristic deep purple (λmax 515-517 nm) colour. It is a very popular method for the study of antioxidants [10]. The antioxidant behaviour of the tested derivatives was expressed as relative or absolute decrease of concentration of DPPH or as IC50 (concentration of a compound decreasing the absorbance of a DPPH solution by 50%). The compounds were assayed over a concentration range of 1-50 μM. As depicted in Table 4, it has been found that entire set of derivatives exhibit considerable anti-oxidant activity. It has been found that compounds having the trihydroxy group (4i) showed the prominent inhibitory activity with IC50=3.1 ± 0.7 μM. Further, significant radical quenching activity was observed in the case compound containing the electron withdrawing group. Among them, the compounds having isomeric hydroxyl substituent was found to exhibit almost similar activity (Compounds 4d and 4e). Whereas, compound with methoxy and hydroxyl (Compound 4h) showed much improved activity and on replacing the methoxy with ethoxy (Compound 4i) keeping the hydroxyl constant, the activity was abolished. To our surprise, on completely removing the -OH as in the case of compound 4f, the activity was fallen drastically. Thus, it was indicated that, compounds containing substituents, such as -OH or -OCH3 have much improved radical scavenging activity than their halogen substituted counter parts. It was also revealed that, presence of -OH makes the compound much more active along with presence of –OCH3. Whereas presence of ethoxy rather than methoxy render compound less active.

The entire set of compounds was assayed for inhibition of rat liver HMG-CoA reductase activity in vitro according to the method of Kleinsek et al. [12]. The method suggests determining the decrease in rate of absorbance at 340 nm due to the oxidation of NADPH. The assay system without any inhibitor was taken as the negative control, whereas, the test compounds which gave the decreased UV absorbance more than 80% of that in negative control were defined as no significantly active ones. Moreover, results suggest that, only 5 compounds giving less than 80% of decreased absorbance would forwarded to the secondary screening (IC50 determination).

We have developed a series of imidazole derivative via onepot, multi-component reaction. This strategy proved as successful in generating these constitutive compounds in excellent yield in short reaction time. Further, owing to its HMG-CoA reductase together with anti-oxidant mechanism may provide a clue for the generation of newer analogues with potent anti-atherosclerotic activity.