Calculate weights of raw-ingredients that go into customized menus for the day, to prescribe recommended grams of glucogenic-carbohydrate, fiber,protein and fat, instead of counting calories.

Citation: Bhattacharya M. Calculate weights of raw-ingredients that go into customized menus for the day, to prescribe recommended grams of glucogenic-carbohydrate, fiber, protein and fat, instead of counting calories. J Pub Health Catalog 2018;1(4):108-111.

India is experiencing an enigmatic situation where the greatest numbers of people go hungry and yet there is an exponential growth in the prevalence of diabetes and pre diabetes in every strata of society. Why are traditional Indian diets, the foods that are available to the poor, and the diets recommended by health professionals failing? Large scale studies looking into the grams of macronutrients eaten per day in the cuisines of the 36 ethnic regions of India are the need of the day for without them it is assumed that diabetes in India is caused by the same culprits identified in the west: sugar, white flour, potatoes and processed foods. The scale of the task is so enormous that it is practically inconceivable. The lack of these studies does not permit the writing of a full-fledged scientific article and therefore only a brief communication is possible. However, every social class in India cooks their daily food from scratch. The diabetes they are developing is not only from processed foods and sugars. Randomized control trials are very expensive and difficult to conduct. The way out is to prepare several traditional menus-for-the-days for each region, de constructs them into the weights of raw ingredients to be used. These weights can be adjusted to deliver the grams of macronutrients per day deemed ideal for the patient by his health care professional. In such a system the patients are free to cook their meals in the styles they are used to. All they will have to get used to is eating their regular combinations of foods in marginally different proportions.

India is experiencing an enigmatic situation where the greatest number of people goes hungry and yet there is an exponential growth in the prevalence of diabetes and pre diabetes in every strata of society [1,2]. The US, a country with no food shortage and an abundance of processed foods and sugar, has less than half the number of diabetes cases than in India [Figure 1].

The limitations of prescribing diets based on calories. Three macronutrients contribute to energy or calories.

Each gram of glucogenic-carbohydrates is metabolised via the glucose route and gives rise to 4 calories. The fiber portion of “carbohydrates” is excreted unchanged with an insignificant portion being fermented into fatty acids by the gut bacteria and then into calories.

Fat: Every gram is metabolized and gives rise to 9 calories. It does not change into glucose and therefore does not affect blood glucose levels.

Protein: Every gram is metabolised into 4 calories but not via the glucose route. It therefore does not normally raise blood glucose levels. In the rare instance when the glucogeniccarbohydrate intake has been stopped for so long that the body’s stores of glycogen have depleted, (after ~30 h of fasting in a disease free individual), de novo glucose synthesis or gluconeogenesis begins, providing glucose as fuel for other tissues [4].

As legumes and animal proteins are expensive, most Indians in the north and west of the country are unknowingly dependent on whole wheat flour (61.27 g of glucogenic-carbohydrates, 13 g of protein and 2.5 g of fat per 100 g) for their protein needs [5].

Fat when pressed and refined from oilseeds or animal sources is cleared of carbohydrates and protein and is a source of pure fat [6]. Since the early 1800s, Indians embarked on a highcarbohydrate diet that contained more fiber than low glucogenic-carbohydrates [7-9]. Protein and fat intake dropped sharply [10,11]. In the 200 years that followed, this style of eating went down in memory as the traditional cuisine of India [12].

With Independence and the Green Revolution, the high fiber plant produce of the famine era was replaced by a new breed of plant foods: low on fiber and very high in glucogeniccarbohydrates. These were more palatable, less chewy and high on flavor [13]. Protein and fat intake improved but remained severely limited by the two centuries of tradition. The low fibre meals did not satiate the appetites [Figure 2]. 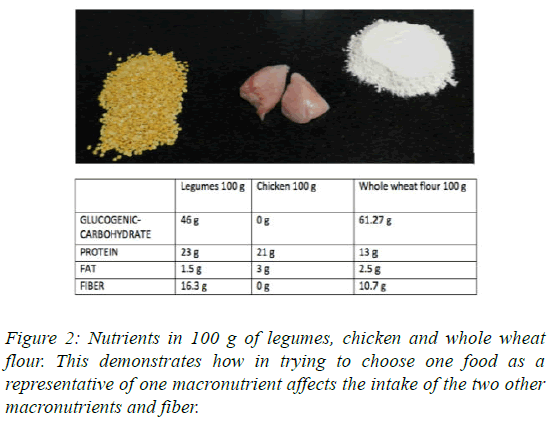 Figure 2: Nutrients in 100 g of legumes, chicken and whole wheat flour. This demonstrates how in trying to choose one food as a representative of one macronutrient affects the intake of the two other macronutrients and fiber.

It led to the eating of larger quantities of the new plant produce including the newly introduced potatoes and tomatoes. The intake of glucogenic-carbohydrates has increased, as a result, to greater than 60% of the day’s energy intake leading to a rising prevalence of prediabetes and diabetes amongst the rich and poor and an adverse impact on total mortality and noncardiovascular disease mortality and stroke [14].

Advising a reduction in calorie intake leads to a fall in the protein and fat intake of a diet already deficient in these two macronutrients. The corresponding reduction of glucogeniccarbohydrates intake is not sufficient to lower blood glucose levels. Diets based on the calorie control method are therefore unsustainable low-protein, low-fat, moderate to highglucogenic- carbohydrate diets that leave the patients hungry with no rewards in the form of normalising blood glucose levels [3].

Compliance becomes a great issue and this explains why doctors in India prefer to start newly diagnosed patients on drugs in preference over diets based on calories. Since no large scale studies have looked into the grams of macronutrients eaten per day in the cuisines of the 36 ethnic regions of India, it is assumed that diabetes in India is caused by the culprits identified in the US: sugar, white flour, potatoes and processed foods.

This is despite the fact that most Indians cook their daily food from fresh raw ingredients. Most are too poor to afford processed food. The government ration of sugar is only 1 kg per family per month for the poorest of poor [15].

Since studies are expensive and time is running out for the masses, the solution is to delink diets from the calorie count system and make customized menus-for-the-day according to the needs of each individual population groups. The prescribers must calculate the weights of the raw ingredients that go into each menu-for-the-day so that recommended grams of glucogenic-carbohydrate, fiber, protein and fat are consumed daily [16-24].

The time to think in narrow slots of only “carbohydrates” or proteins or fats are past. A holistic outlook is required as people eat foods made of several raw ingredients. Each raw ingredient is a mix of two or more macronutrients. This work has become possible as the USDA nutrition database has become freely available to all. A call for updating all national dietary guidelines has been made [25].

Every Indian should be educated enough to ask him/herself: If I eat 200 g pear for breakfast, then how many grams of glucogenic-carbohydrates, protein and fat have I consumed? How many grams of raw rice, wheat flour and legumes, raw cauliflower (or specific vegetables), sugar, animal flesh, eggs, milk, and cooking oil am I, therefore, permitted to eat during the rest of the day to: 1) feel satiated; 2) consume at least the RDA of protein and fat; 3) to eat just enough glucogeniccarbohydrates to maintain stable blood glucose levels; and 4) and not exceed toxic levels of any macronutrient?

Diabetes in India is caused by malnutrition and not over nutrition. This malnutrition is not caused just by processed foods and sugar, but by eating wrong proportions of homecooked foods made from fresh raw ingredients. Randomised control trials are expensive and not feasible in the field of nutrition as one nutrient at a time cannot be removed from home-cooked foods.

The urgency needs to be recognized before the burden of diabetes and cost of the drugs, required to control the situation, overwhelms India, the US which has the largest numbers of Indian diaspora and China where diabetes is a raging epidemic.

Thanks are extended to Bernadette N. Kumar, Institute for Health and Society, University of Oslo who offered her comments on the manuscript.