It is known that duration of plant ontogenesis is not the constant value in relation to physical time axis. For instance, the sunflower ontogenesis duration in the south of Ukraine fluctuates from 80 to 120 days of ontogenesis. That is, biological time is stretchable and contractible depending on condition of the environmental factors [1].

The mathematical apparatus is stated in papers. The basic provisions of the theory of fluctuations should be briefly reminded. As a preliminary, we will consider the elementary fluctuation system described by the equation.

Thus, the time is measured in this method in Celsius degrees. For transition to real time we should perform the following operation: by the time of set of the effective temperature sum tos equal to A, it is considered that the development phase occurred [3]. Let's divide the right and left members of equation by value A.

Let's consider the elementary increment of biological time for one day in the method of effective temperature sum. Such increment depends on air temperature.

In other words, we can assume that the time vector deviates from its normal position: from physical axis of time. 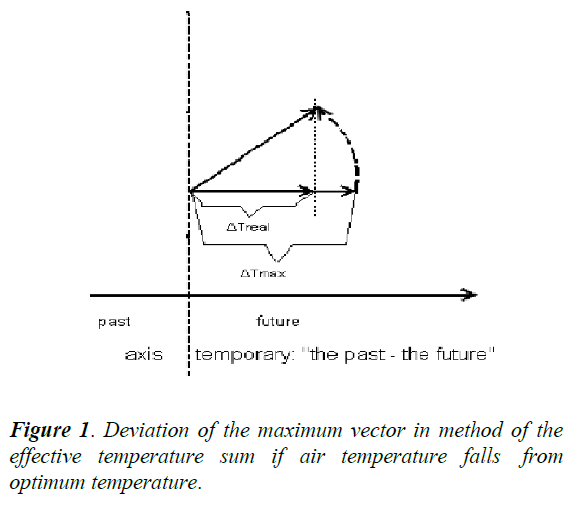 Figure 1. Deviation of the maximum vector in method of the effective temperature sum if air temperature falls from optimum temperature.

This data indicate that the method of the effective temperature sum calculates the amount of projections of the deviating time vector to physical axis of time.

That is, according to this method we calculate the sum of scalar products by physical axis of time. Passing to limit when increment value tends to zero, we obtain the integral of scalar product. At the same time, the line turns into curve in some two-dimensional time space. 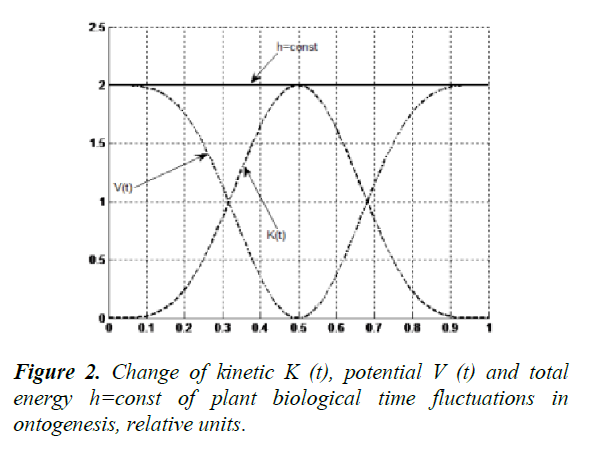 One can see from the Figure 2, that the kinetic energy at the beginning and at the end of growth takes zero values. In the middle of plant organism growth, at point of ontogenesis half t=0.5 the biological time kinetic energy takes the maximum value K (t) =max value. Potential energy V (t) at the beginning of growth and at the end of growth has the maximum value. Potential energy of biological time fluctuations at the end of ontogenesis, at the moment of plant full ripeness completely passes into seeds, into reproductive organs [6].

According to the law of energy conservation, the total energy of biological time fluctuations is always constant: h=K(t)+V (t)=const. Let's construct change of kinetic and potential energy of biological time fluctuations for real ontogenesis of plants. For this purpose we take sunflower which has been grown in Odessa region, Chernomorka urban settlement in 1986.

Let's calculate tension of environmental factors. At the same time, we will assume that the soil nutrition level is at quite high (optimum) level and does not affect the processes of current of biological time. For integration we have to choose the integration step value (Figures 3 and 4) [9]. 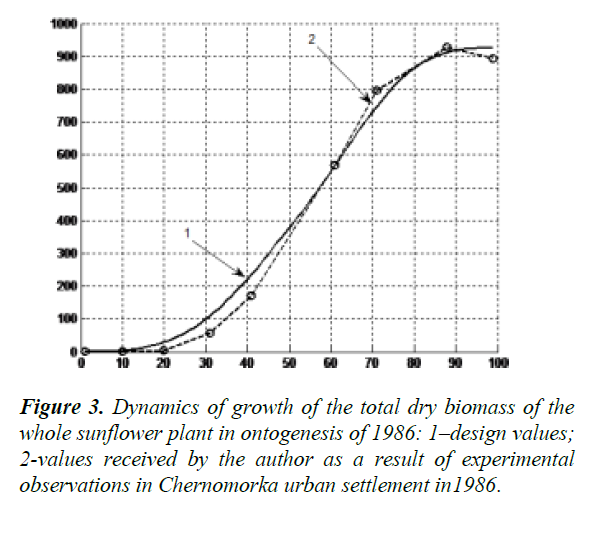 Figure 3. Dynamics of growth of the total dry biomass of the whole sunflower plant in ontogenesis of 1986: 1–design values; 2-values received by the author as a result of experimental observations in Chernomorka urban settlement in 1986. 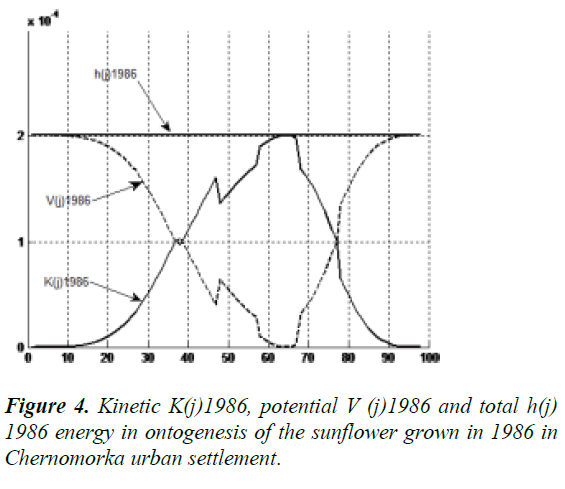 We started this research with the analysis of the method of effective temperature sums. Also we came to conclusion that the speed of plant development depends on photosynthesis and respiration of the crop: on gas exchange CO2 of the whole organism of plant. At the same time, it is possible to consider the abstract intervals of time. If we assume that time in plant organism stretches and contracts depending on condition of environmental factors linearly, then we will derive the same conclusions on the basis of the fact that the time vector turns around the point of current moment of ontogenesis. And we calculate the scalar product integral.

It is known that the development speed is defined by factors of temperature, moisture, light, and plant nutrition. In our case, we found that the speed of current of biological time is entirely defined by the total gas exchange CO2 of crop, which in its turn is defined by factors of light, temperature, moisture, nutrition and other factors. For example, change of CO2 contents in the air. Development speed will also depend on this factor.

Also we should note that this equation of harmonic fluctuations is defined for the complete organism of plant. At the same time, the plant consists of the growing bodies: leaves, stems, roots, and reproductive organs. Growth of these bodies is also described by received logistic curve in normalized. Then the biological time of body will also be described by the equation of harmonic fluctuations of the time, up to cells. The researches of the isotope observation of cell metabolism demonstrate that the carbon metabolism in photosynthesizing cell is fluctuating process. But this is the material of other research.