Objective: The study was designed to evaluate the biological and phytochemical potential of Farsetia hamiltonii (Royle), a desert medicinal plant belongs to family Brassicaceae and is traditionally used by residents of Cholistan to treat diabetic, different infectious diseases and gastrointestinal problems. Method: Different biological/enzyme inhibition activities of crude extract of Farsetia hamiltonii were performed first time in this study. The dichloromethane and methanol extracts of aerial part of Farsetia hamiltonii were studied for anti-alphaglucosidase, anti-chymotrypsin, anti-urease, antibutyrylcholinesterase and anti-bacterial activities. The plant was explored first time regarding phytochemical constituents by using the GC-MS technique. Results: The results of crude extracts of Farsetia hamiltonii were significant and provide justification for the traditional therapeutic potential in treating the diabetes, infectious diseases and gastrointestinal problems. Nine (9) compounds were identified by GC-MS technique.

Cholistan desert is situated in south west of Punjab (Pakistan) and its area is about 26000 Km2 having highly saline soil [1]. It is unique wild land having endemic flora containing 28 families and 138 species out of which about 64 species have been identified as medicinal plants [2]. The plants are traditionally used by inhabitants to treat different types of ailments as well as for animals by forming decoction, pellets and powder of herbs [3].

Farsetia hamiltonii (Royle) is a desert plant and is endemic to the desert area of Pakistan and India. It is an annual shrubby, often woody at base, 10-40 cm long, vary variable in size, densely appressed white hairs, braches erect or sub spreading, leaves oblong linear, thick woody roots, fruit a little longer, narrowed at either end, are distinctive. Flowers are white or pink in color, petals slightly longer than sepals and flowering season is March to September [4]. The medicinal use of plant is to treat pain, inflammation and swelling in joints, diabetes, gastrointestinal and infectious diseases. This plant is used with “Ghee” as a cooling medicine and tonic. Its boiled juice is applied to treat camel wound in Cholistan [3]. The local name is “Fareed Booti” [5]. This plant is selected for study keeping in view the medicinal importance of genus Farsetia. The ethyl alcohol extract of aerial parts of F. aegyptia was in vitro investigated for cytotoxicity and exhibited cytotoxicity against A549 and HepG2 carcinomas. The phenolic rich fraction was further fractionized and isolated a new flavonoid kampferol-8-C-O-β-diglucopyranoside which showed the high cytotoxicity against Hela and MCF-7 cell lines [6]. The alcoholic extract of F. aegyptia is evaluated for anti-bacterial and anti-fungal activities which show maximum inhibition against Klebsiella pneumonia and no activity against Candida albicans [7]. According to literature survey, no phytochemical and biological activities on F. hamiltonii have been reported and this species is found unexplored.

The fresh plants of F. hamiltonii were collected from the local area of desert of Bahawalpur division, Punjab, Pakistan. The plant specimen was identified by research officer/ taxonomist, Mr. Hafiz Muhammad Waris from Cholistan Institute of Desert Studies (CIDS), The Islamia University of Bahawalpur, Pakistan. The plant specimen is deposited in the herbarium of CIDS for future reference and allocated voucher number 3470/CIDS/IUB.

Alpha glucosidase inhibition activity: This assay was performed according to the slightly modified method [8]. The 70 μL phosphate buffer (50 mM, pH 6.8), 10 μ of plant extract solution (0.5 mg/ml), then, added 10 μl alpha glucosidase enzyme (0.057 units). The contents were mixed and pre-read. The reaction was initiated by the addition of 10 μl of 0.5 mM per well substrate. The absorbance was measured at 400 nm. Acarbose was used as standard. The results are given in Table 1.

Note: All values are mean ± SEM of triplicate. *DCM: Dichloromethane

Urease inhibition activity: It is the modified form of Berthelot activity [10]. The phosphate buffer (10 μl, pH 7.0), 10 μl of plant extract solution (0.5 mg/ml) and 25 μl of urease enzyme solution (0.1347 units) were used. Then, 40 μl of urea stock solution (20 mM) was added and 115 μl phenol hypochlorite reagents (prepared by mixing 45 μl phenol reagents with 70 μl of alkali reagent) were added. The absorbance was measured at 625 nm and Kojic acid was used as standard (Table 1).

Butyrylcholinesterase inhibition activity: Butyryl cholinesterase (BChE) inhibition activity was performed according to the method [11]. In this assay, 60 μl KH2PO4 buffer (100 mM, pH 7.7) and 10 μl plant extract solution (0.5 mg/ml) were mixed, followed by the addition of 10 μl enzyme butyryl cholinesterase. The contents were pre-read. The reaction was initiated by the addition of 10 μl of DTNB. The absorbance was measured at 405 nm and Eserine was used as standard (Table 1).

Anti-bacterial activity: The method [12] was used, two grampositive bacteria (Bacillus subtilis, Staphylococcus aureus) and three gram-negative (Escherichia coli, Pseudomonas aeruginosa, Salmonella typhi) were included. The absorbance was measured at 540 nm, before and after incubation and the difference was noted as an index of bacterial growth. Ciprofloxacin (0.5 mM) was used as a standard. The percent inhibition was calculated using the formula:

*Concentration of extract was 100 µg/well

Table 2. Results of anti-bacterial activity with MIC50 of crude extracts of aerial parts of F. hamiltonii.

GC-MS analysis was performed on GC Agilent system (B 7890) with mass spectrometer detector (MSD-5977A) employing the following condition: Column HP-5MS, size 30 m × 0.25 mm, 0.25 μ, composed of 100% dimethyl poly siloxane. The source temperature for ionization was set at 250°C. The 2 μl of dichloromethane and methanol extracts of aerial parts of F. hamiltonii were used in GC-MS analysis [14].

The percentage enzyme inhibition was calculated by the following formula:

IC50 values (concentration at which there is 50% in enzyme catalyzed reaction) compounds were calculated using EZ-Fit Enzyme Kinetics Software (Perrella Scientific Inc. Amherst, USA). For the determination of IC50 values, test solutions were assayed at various dilutions i.e., 0.5, 0.25, 0.125, 0.0625 mg/ml. All the results (Tables 1 and 2) are mean ± SEM (standard error of mean) of triplicate values (n=3).

Farsetia hamiltonii (Royle) is endemic desert plant used by hakims and residents of Cholistan desert by forming decoction or in powder form to treat diabetes, infections, pain, inflammation and gastrointestinal diseases [3]. To confirm the traditional anti-diabetic use of F. hamiltonii, alpha glucosidase inhibition activity was evaluated. The methanol extract of aerial parts of F. hamiltonii possess (%) inhibition 97.54 ± 2.39 with IC50=25.32 ± 0.12 μM, was more potent in crude form than standard Acarbose having 92.23 ± 0.14 with IC50=38.25 ± 0.12 μM, which indicates that this FHAM crude extract may have some anti-diabetic compounds. The alpha glucosidase enzyme catalysis the hydrolysis of disaccharides into glucose, inhibition of this enzyme can suppress the post prandial hyperglycemia and this inhibition will be useful invention for management of diabetes type II [15]. The presence of this activity only in methanol extract indicates that some polar biomolecules are responsible for anti-diabetic effect. The results are shown in Table 1.

Research is going on enzyme urease regarding its correlation with several diseases including in animals and humans like urinary tract diseases and gastro duodenal diseases. An important role played in the pathogenesis of a disease by the bacterial urease including bacterial species like Staphylococcus saprophiticus, Ureaplasma urealiticum, Yesinia enterocolitica and Proteus mirabilis [16]. Both extracts (FHAD and FHAM) of the plant not exhibited the anti-butyryl cholinesterase activity.

The anti-bacterial activity of both dichloromethane and methanol extracts was evaluated concentration (20 μg/ml) against two gram-positive bacteria (Bacillus subtilis, Staphylococcus aureus) and three gram-negative (Pseudomonas aeruginosa, Salmonella typhi, Escherichia coli). The percentage inhibition and MIC50 values (Table 2) shows that both dichloromethane and methanol extracts (FHAD and FHAM) has significant bacterial growth percentage inhibition and MIC50 values are very well comparable with standard ciprofloxacin. The bacterial growth inhibition ranging from 54-74% which is indicating the potential of crude extracts of Farsetia hamiltonii regarding presence of anti-bacterial biomolecules.

To identify the chemical constituents in the two crude extracts of F. hamiltonii, the GC-MS technique was used in the study. The five (5) compounds were identified in the dichloromethane extract (FHAD), whereas four (4) compounds were identified in methanol extract (FHAM) of aerial part of F. hamiltonii (Tables 3 and 4) [17-24].

The names of nine (9) identified compounds are: (1) 12-methyl-E,E-2,13-octadecadien-1-ol, (2) estra-1,3,5(10)- trien-17β-ol, (3)oleic acid, (4) 13-heptadecyn-1-ol, (5) ethyl isoallocholate, (6) octadecan, 6-methyl-(7) cyclo propane botanic acid, 2-[[2-[[2-[(2-pentyl cyclo propyl) methyl] cyclo propyl] methyl]cyclo propyl]methyl]-, methyl ester (8) hexadecanoic acid, methyl ester and (9) ethyl iso-allocholate were identified by performing the analysis of two extracts (FHAD, FHAM) of aerial part of F. hamiltonii by GC-MS technique, whereas the ethyl iso-allocholate (Compounds 5 and 9) was identified in both extracts. The Mass spectra of identified compounds are given in Figures 1 to 8. The pharmacological effects or uses of these nine identified compounds are reported in the literature and having anti-microbial, anti-fungal, anti-proliferative, antioxidant and anti-inflammatory potentials. 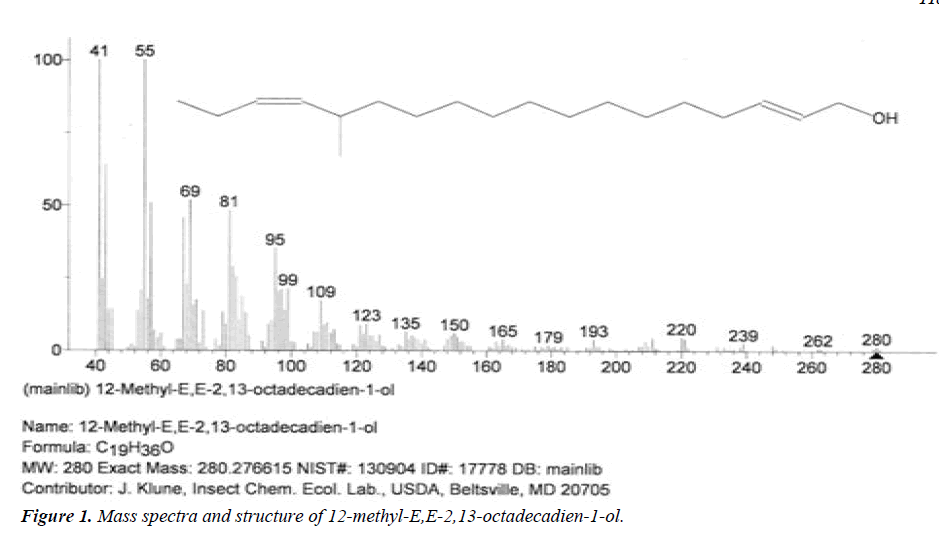 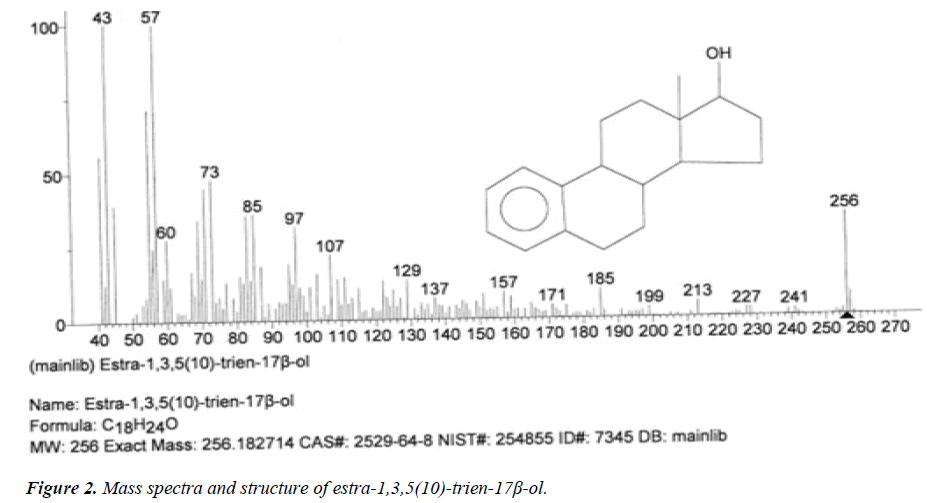 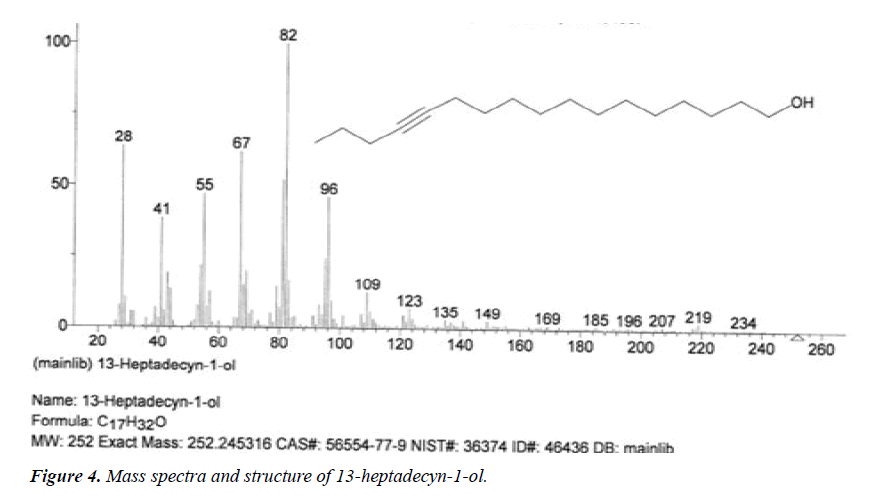 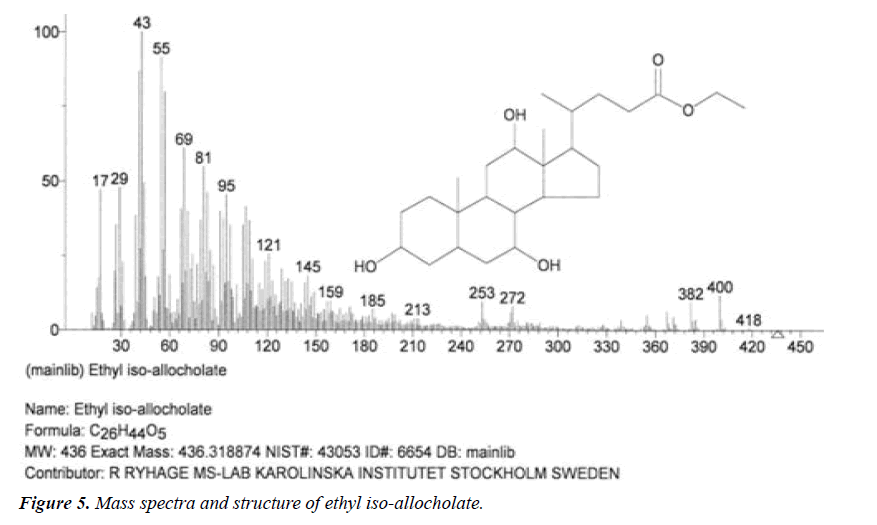 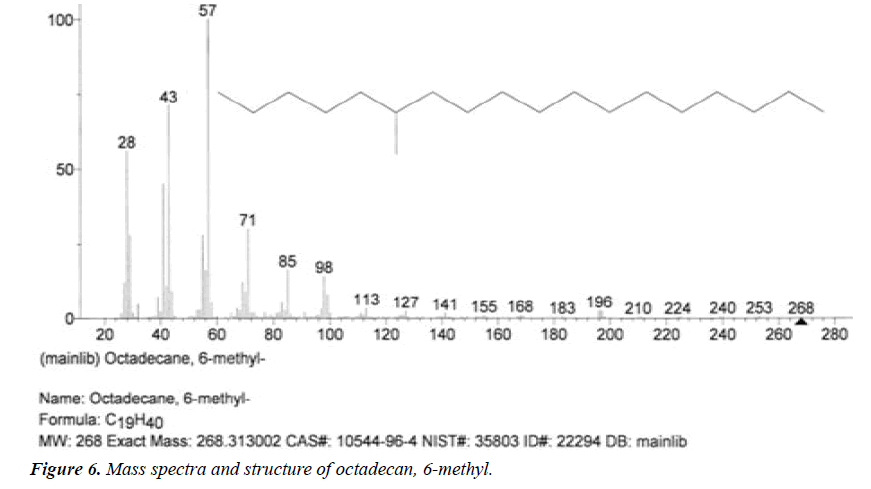 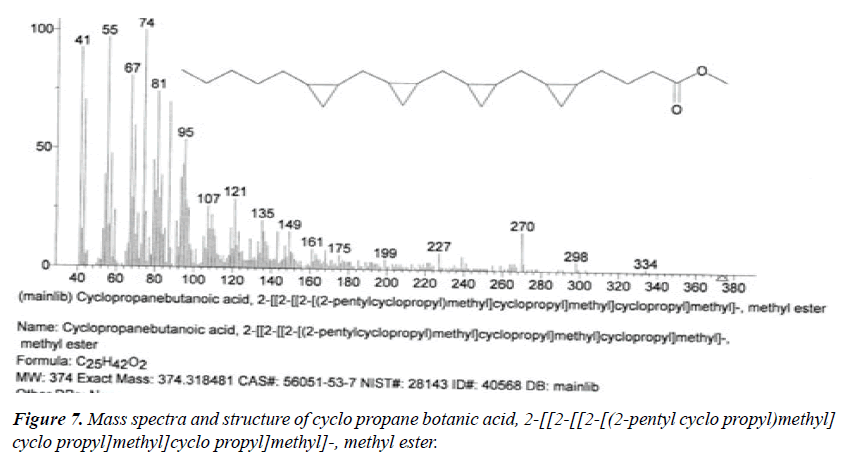 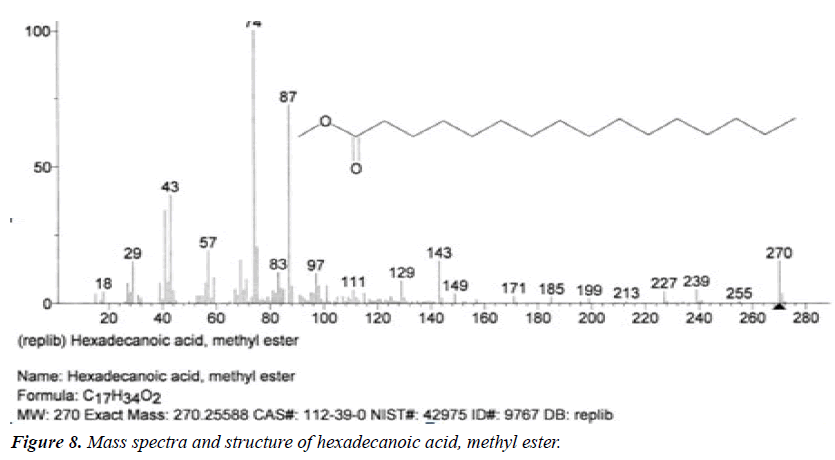 The authors are grateful to Mr. Zafar Mehmood, Depatment of Statistics, and the Islamia University of Bahawalpur, Bahawalpur Pakistan regarding help in statistical calculations.

No conflict of interest associated with this study.

It is declare that this work was done by the authors named in this article and all liabilities pertaining to claims relating to the content of this article will be borne by them.