#These two authors contribute to this study equally

Natural plant extracts and their bioconstituents offer biosynthetic approaches for different metal and metal oxide nanoparticles which environment friendly are allowing a controlled synthesis with tuneable shape and size [20]. It is well known that the biomolecules present in the plant extract play role in the synthesis of nanoparticles. The bacteria [21] and enzymes [22] have already been used for the eco-friendly preparation of ZnO NPs.

In recent days, various metal and metal oxide nanoparticles are having high demand in market due to their good photostability, non-toxicity, high fluorescence, solubility and excellent biocompatibility. For instance, Lin et al., have reported the excellent biocompatibility of AuNPs against gastric cancer cell lines [23]. Hence, there is an increasing demand for the development of new biocompatible metal and metal oxide nanoparticles for future cancer therapy applications.

In the present work, we used the leaf extract of Murraya keenigii plant for the eco-friendly synthesis of ZnO NPs. The polyphenols that are present in the extract of Murraya keenigii plant play key role in the reduction and stabilization process. Further the prepared ZnO NPs are studied for their cytotoxicity towards the gastric cancer (MGC803) cell lines.

All the chemicals and reagents used in the experiments were purchased from Sigma-Aldrich Ltd, Shanghai. All the glass vessels used were initially cleaned with acid solution and double distilled water. Double distilled water was used for preparation of ZnO NPs.

3 g of dried Murraya keenigii leaves were weighed and ground well using a mortar pestle and added to 20 mL of double distilled water. The mixture was then heated at 90°C for about 1 h and filtered using cellulose nitrate filter paper to obtain an extract solution. ZnO NPs were prepared by the reduction of ZnNO3 using leaf extract, containing bioconstituents which acts as stabilizing agent.

About 20 mL of prepared Murraya keenigii leaf extract was added 60 mL 0.01 M ZnNO3 precursor solution and the resulting solution was heated at 100°C for 30 min to obtain an yellow precipitate which later was washed twice with ethanol. The obtained product was then annealing at 300°C for 1 h to get white powder of ZnO NPs.

To check the potentiality of ZnO NPs for biomedical applications, we have checked the cytotoxicity of prepared NPs towards gastric cancer cell lines. The cytotoxicity assay on MGC803 cancer cells was conducted by following 3-[4,5- dimethylthiazol-2-yl]-2,5-diphenyltetrazolium bromide (MTT) assay. A cell density of about 1 × 104 cells per well was seeded in a 96-well plate and followed by incubation for about 24 h. After the incubation period, the media was discarded and a fresh media was added along with following incubation at 37°C for 24 h. Then, the media was discarded and washed two times with Phosphate Buffer Solution (PBS). An MTT reagent (5 mg/mL) was added to all the wells and incubated for 4 hours. Later, medium containing unreduced MTT was discorded and 100 μL of DimethylSulfoxide (DMSO) was added to dissolve the MTT reagent. On the other hand, a control experiment was performed without the addition of ZnO NPs. The optical absorbance of each well was then recorded at 570 nm using a microplate reader. 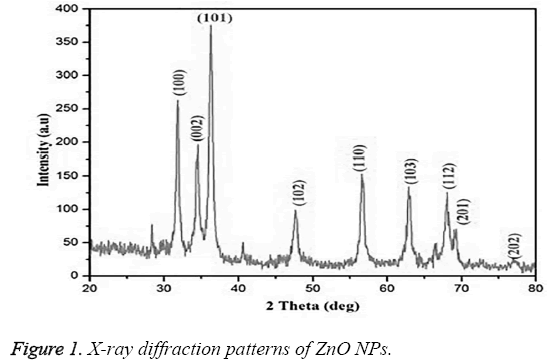 Figure 2 represented the TEM images and Selected Area Electron Diffraction (SAED) pattern for the biofabricated ZnO NPs. It is found that the NPs are hexagonal with a mean particle size of 20 nm (also confirmed from DLS data). The SAED pattern revealed that the synthesized ZnO NPs were crystalline and polydispersed in nature (Shown in Figure 2B). 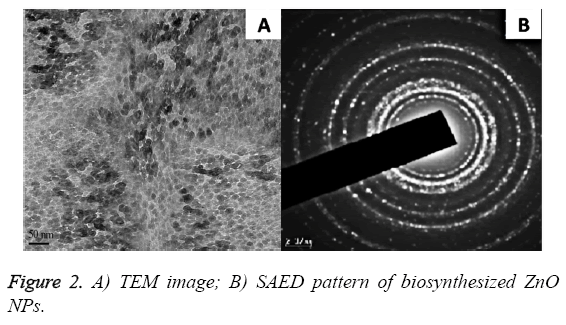 Figure 3 represented the Energy-Dispersive X-ray Spectroscopy (EDS) for the prepared ZnO NPs, which shows the existence of peaks related to oxygen and zinc confirming the ZnO NPs. On the other hand, Figure 4 represented the FTIR spectrum of the plant extract mediated ZnO NPs. The presence of peak at 510 cm-1, corresponding to the Zn-O bond stretching vibrations [24] the bands shown at 1088 cm-1 and 3,420 cm-1 are characteristic to the stretching vibrations of symmetric C-O and O-H groups [25]. The vibrational bands at 1,643 cm-1, 2916 cm-1 signifies the stretching of C=O and C-H functionalities respectively. 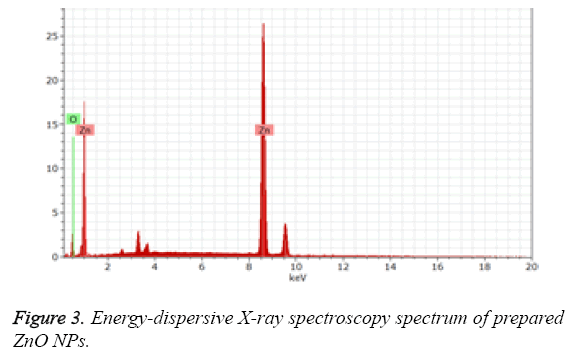 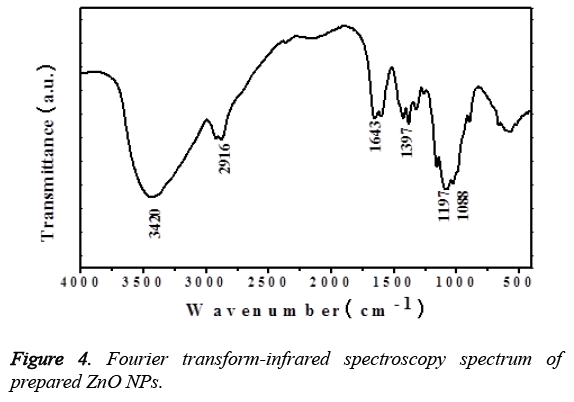 The zeta potential and size distribution of the ZnO NPs are represented in Figure 5. From the DLS data, the mean particle size is found to be 20 nm and most of the particles lied in the range from 10 to 30 nm (also evidenced from TEM results). On the other hand, surface charge of the prepared nanoparticles is -29 mV.

An MTT assay was performed to know the cell viability of MGC803 cancer cells treated with various concentrations of ZnO NPs. From Figure 6, it is found that a very negligible cell death of MGC803 cells is observed even after their treatment with the highest concentration (50 μg/mL) of ZnO NPs. From the figure, it is also revealed that, no significant cytotoxicity of ZnO NPs in the concentration range of 0~50 μg/mL. On the other hand, the cell viability is found to be more than 95% when compared with control group. 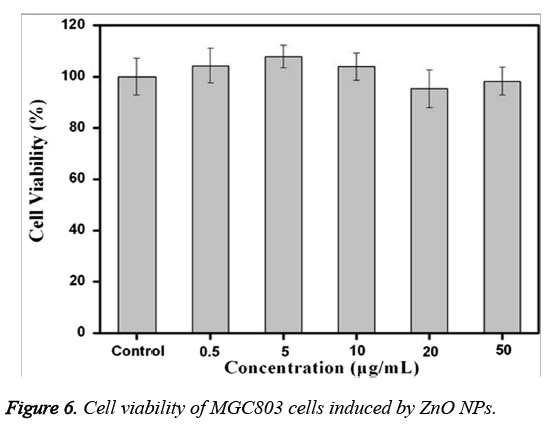 Where β is full width half-maximum, λ is the wavelength of (101) plane line of the ZnO NPs and θ is the diffraction angle. The measured average crystallite size of the ZnO NPs is 18 nm. The formation of ZnO NP is confirmed by naked eye with the change of the colour of reaction solution during synthesis. The reaction of leaf extract of Murraya keenigii with ZnNO3 resulted in colour change with the formation of yellow colour precipitate within 30 min. It is found that the present synthesis is faster than the previous reports on green synthesis of ZnO NPs [27-29]. On the other hand, the blank reaction that is conducted without the addition of plant extract remained same without any change even after 72 h, signifying the role of Murraya keenigii extract in the reduction of ZnNO3.

Further the formation of ZnO NPs by Murraya keenigii leaf extract is also confirmed by EDS and TEM results. The EDS spectrum revealed the existence of extra peaks other than zinc and oxygen which may be because of the biomolecules that are adsorbed on the surface of synthesized ZnO NPs without any extra impurity, indicating the purity of the prepared ZnO NPs. Further, the FTIR results revealed the information about the surface capping of ZnO NPs with phytoconstituents of the Murraya keenigii plant extract. The presence of vibrational bands corresponding to O-H and C-O functionalities signified the stabilization of ZnO NPs with the secondary metabolites of Murraya keenigii plant extract [30,31]. On the other hand, the presence of bands related to ketone functionalities indicating that the hydroxyl groups of polyphenols are involving the reduction which further converting to their ketone forms after reduction. Further, the FTIR results are supported by negative zeta potential of the ZnO NPs. The negative surface charge of the plant extract mediated ZnO NPs may be because of the adsorbed phenolic functional groups of plant extract that existed on the surface of NPs. These negative surface charges may further generate repulsions among NPs, leading to their stability.

An MTT assay was performed to determine the biocompatibility and potential of the ZnO NPs for biomedical applications. It is well known that various nanoparticles show cytotoxicity towards different cancer cell lines. The cytotoxicity of nanoparticles mainly depends on their shape, size and surface modification. On the other hand, the effect of the size of AuNPs on in vitro cytotoxicity in HeLa cells has already been proved. Maddinedi et al., have showed the size dependent cytotoxicity of AuNPs towards A549 and HCT116 cell lines [32]. Indeed, Haucket et al., [33] and Panet et al., [34] have shown that the size of the particle, and not the capping agent, is responsible for determining the toxicity of AuNPs. Moreover, there have been no systematic studies comparatively analysing the size and dose dependent cytotoxic behaviour of AuNPs synthesized using diastase towards two different cell lines.

In the present work, we have studied the cytotoxicity of ZnO NPs against MGC803 cell lines. Figure 6 have showed that the prepared ZnO NPs are non-toxic and exhibited more biocompatibility towards MGC803 cancer cells within 0~50 μg/m. From these results, we can confirm the high biocompatibility of synthesized ZnO NPs, signifying their important role in biological applications. 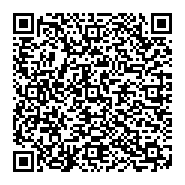