Biliary atresia: Color doppler US findings in neonates and infants at a specialized hospital

Neonatal jaundice occurred due to various causes. Most cholestatic conditions can be classified into either as obstructive or as hepatocellular in origin. More than 90% of obstructive cholestasis are due to Biliary Atresia (BA). Due to impairment of bile formation usually hepatocellular cholestasis occurs and it indicates that hepatocytes are not functioning properly. The aim of this study was to describe the color Doppler US findings in the livers of neonates in BA with non-BA and control groups.

Idiopathic neonatal hepatitis causes majority of the hepatocellular cholestasis. For proper management protocol it is important to evaluate either obstructive or hepatocellular cholestasis. Because treatment options for one is surgical and for other is medication [1,2]. But from clinical symptoms, biochemical and histological findings, it is very difficult to differentiate between both, as they share almost same features. Therefore, Mayor et al. [3] introduced general guidelines to evaluate cholestatic jaundice in infants and neonates.

In this type of patients, high-spatial-resolution real-time ultrasonography (US) serves as a first-time investigation tool to determine the cause of jaundice. For diagnosis of BA, the presence of Triangular Cord (TC) sign and an abnormal gallbladder (GB) on US image is widely accepted [4]. However, sometimes TC sign may be missed. Its detection is largely dependent on the techniques used by the sinologist, machine and his or her experience. Furthermore, in neonates with congenital anomaly, it is very difficult to find TC sign or if the resolution of the US apparatus is poor [5].

It was a prospective observational study of 3 years extending from January 2013 to January 2017 at radiology and imaging Department of Dhaka Shishu Hospital. Before staring the study institutional review board approval was obtained and acquisition of informed consent was exempted. In this study US and color Doppler US was done in 35 patients with neonatal cholestasis who had not been fed for at least 4 hours and 30 control neonates who did not have jaundice or liver diseases. The clinical diagnoses of this control group were as follows: gastrointestinal tract disease in thirteen patients, renal disease in ten patients and congenital heart disease in seven patients.

Routine chemical investigations, including measurement of total bilirubin were done for every patient. The reference range for blood sample parameter provided by our institute was 0.2- 1.2 mg/dl for total bilirubin. One radiologist more than 3 years of experience performed all the US by using 5-8 MHz curved linear and 5-12 MHz linear transducers (Simenssonoline G-40 and Siemens acuson NX 3 Elite) in all patients.

On US and Color Doppler US, TC sign present or not, GB length in cm, the thickness of the echogenic anterior wall of right portal vein (EARPV) in mm2 just proximal to the right portal vein bifurcation, Diameter of hepatic artery in mm2 and presence or absence of hepatic subscapular flow were recorded (Figure 1). A GB length of 1.5 cm was considered as normal. In US EARPV thicker than 4 mm on longitudinal US image was taken as presence of TC sign. The observer measured all the parameters twice and chooses the largest ones. After completion of US all patients were underwent color Doppler US (pulse repetition frequency, 1200-1500 Hz; power gain percentage, 82%-92%: Medium flow velocity; medium wall filter). For transverse scanning examination with the linear transducer, the color box was placed on the anterior surface around the falciform ligament. The color box measured 1 cm in height and 3-4 cm in width. We considered hepatic subscapular flow to be present when vascular structures continued to the liver sub capsular surface on color Doppler US images (Figure 2). All patient’s diagnosis was confirmed by histopathological study. 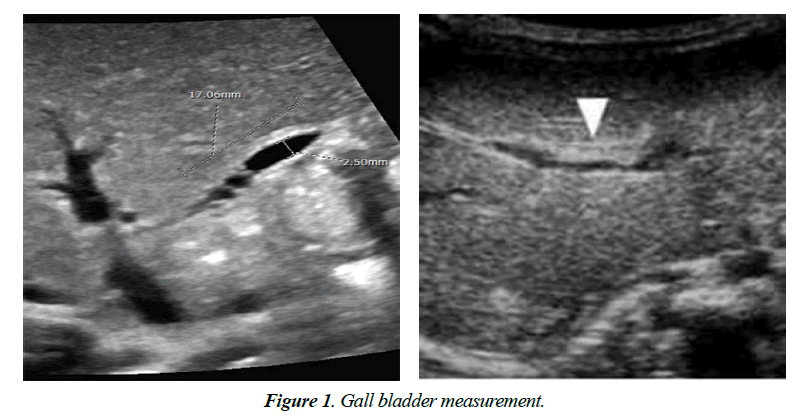 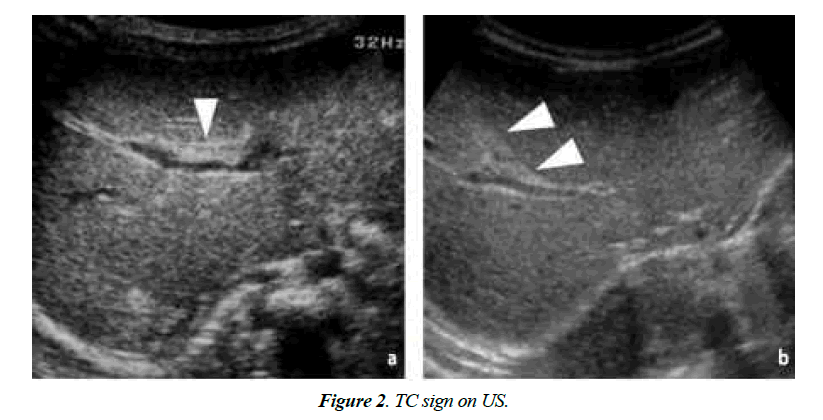 The two sample t test was done to compare the total bilirubin between BA and those of Non-BA and for age distribution between BA and control groups. For categorical association person x2 test were done. Multivariate logistic regression analysis was done to determine the significant association of presence of TC sign, GB length, diameter of portal vein and hepatic artery and presence of hepatic subscapular flow were useful with presence or absence of BA. Data analyses were done with statistical software.

In the current study among the 40 cases after confirmed diagnosis 29 was found as BA and 11 with non-BA. Here 30 control subjects were taken. In the 40 patients with neonatal jaundice, we did not find any significant differences regarding age and total bilirubin level, but male to female ratio were significantly differ between patients with BA and patients with non-BA. Regarding compare with control subjects with BA patients, though male to female ratio was not significantly differ but age and total bilirubin level had significant difference between the groups (Table 1).

On multiple logistic regression it was noted that gender, presence of TC sign, hepatic subscapular flow presence or absent and GB length were significant predictors for developing BA (Table 3). Patients who had positive TC sign on US had 2.906 times more chance to develop BA than who had not TC signs. On color Doppler scan that had positive hepatic subscapular flow had 8.87 times more chance to develop BA (Table 3).

Table 3. Multiple logistic regression showing association of predictors with presence of BA or not. 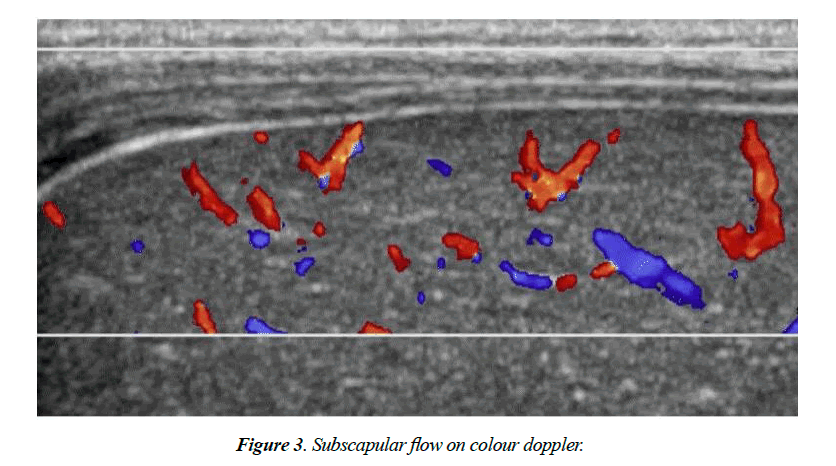